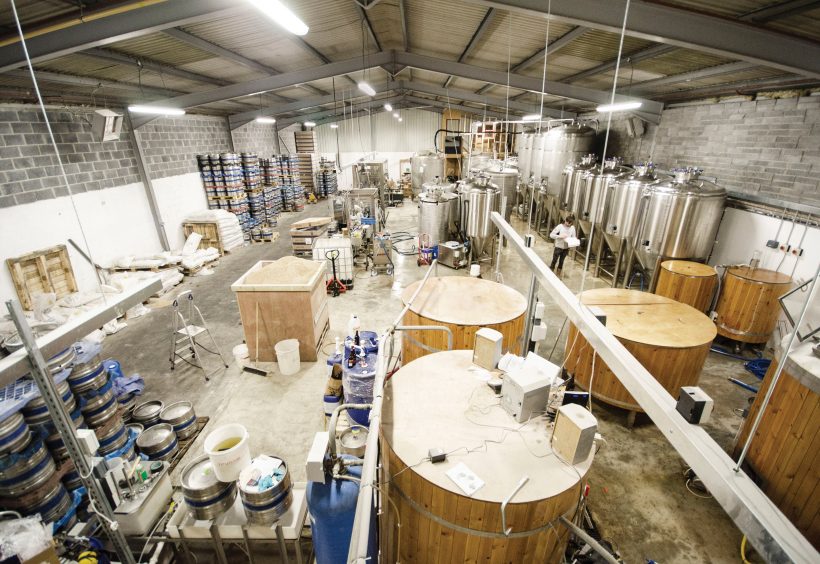 “It’s just beer,” says O’Connell, who, together with Walsh, built Galway Bay into one of the country’s largest craft breweries and bar chains. The story of their success begins in Galway’s Salthill neighborhood, a humble fishing village that has grown into a tourist destination with the addition of a promenade, an entertainment complex and the National Aquarium. Starting with a dancehall-turned bar called The Oslo in 2009, the two added a 7-barrel system and transformed it into one of the first brewpubs in the country.

“When you’re trying to import proper beers and you can’t, you start making them yourself,” says O’Connell. “We had that [one brewpub] and we never really thought, stupid as it may seem, to get into supplying our other bars in a big way. We just wanted to see where it would go.”

Galway Bay has upgraded its brewing capacity twice since 2009, growing from supplying one bar with two beers to supplying nine bars in Galway and Dublin with five core beers and a rotating pilot series. Much of this success can be traced back to 2012, when the partners hired a 21-year-old biotechnology graduate with no professional brewing experience.

“One month after my finals finished I came on and did my first brew with Galway Bay Brewery, with the old brewer,” remembers Chris Treanor, a charming and enthusiastic Monaghan native full of ideas about beer. “I did three days’ work—three separate brews—he showed me the different recipes, the different quirks that each recipe demanded, then handed the keys to me and said ‘best of luck.’”

Irish Beer’s Coming of Age
After moving into a new 5,000-square-foot brewery in September, Galway Bay is now in the process of converting its former brewpub space into a barrel-aging facility, making it the first brewery in the country with a dedicated barrel-aging program. It’s part of Treanor’s ambitious plan to push the boundaries of Irish beer.

According to Beoir, a consumer group founded to promote Irish craft brewers, only 27 bars in the country served Irish craft beer in 2007. Today, that number has grown to more than 600, and it continues rising steadily. Ireland’s total brewery count is currently up over 100, with more than 50 meeting Beoir’s definition of a craft producer.

When Galway Bay began brewing in 2009, its beer “was mediocre at best,” says Beoir chairman Reuben Gray. “Nothing wrong with it—just very much the same as everyone else.” That changed when Treanor came aboard. “Chris pushed the boundaries of Irish brewing and brews beer we can proudly place alongside the likes of Pliny the Elder or Two Hearted,” argues Gray.

Although Red Ales and Stouts have traditionally dominated Irish brewing, a new generation of young brewers like Treanor have invigorated things with a sense of adventure. “They are experimenting in increasingly diverse ways and collaborating with breweries in other countries as well as within Ireland,” says Gray. “In 2013, the Irish craft brewing industry found its feet. In 2014, it started on the road to catch up with the UK and America.”

In Treanor’s opinion, it’s possible for Irish brewers to find a balance between American and British styles. This philosophy has guided his approach to brewing at Galway Bay. “Three years ago, the craft beer world in Ireland was a very safe place,” Treanor explains. “Everyone was holding their cards very close to their chest and making the holy trinity of beers: a Pale Ale or lager, a Red Ale and a Stout.” Not any more. “We’ve got these big, American-style beers,” he says, “but at a lower ABV and in a bigger glass.”

Looking to Italy’s vibrant beer scene for inspiration, Treanor envisions a future for Irish beer that embraces its own history and culture rather than imitating others. “Hopefully in the next few years we’ll have a craft beer scene that is quintessentially Irish, rather than us taking inspiration from the States or the UK or mainland Europe.”

Blazing a Trail, Ale by Ale
At Galway Bay, that creativity has led to a core lineup of beers ranging from a hoppy Pale Ale and a highly drinkable Milk Stout to a fruity Double IPA—not exactly a style you’d expect to come by in western Ireland. But the rotating pilot series is where Treanor’s creativity really shines. And the company’s nine bars make for a great sounding board for new brews.

“We’ve got the advantage of knowing what sells in our own bars, it gives us a feel of what the market wants,” says O’Connell. “Everybody started off with a Red Ale, a Pale Ale, but we’re moving away from that.”

With each new successful beer Treanor brews he gains more creative freedom. It started with Buried at Sea, a sweet Stout that was the first beer of his own design. Another Stout, Two Hundred Fathoms, followed and then he moved on to a Double IPA called Of Foam and Fury. All three were met with praise. “With each of those graces the leash gets let loose to the point that we’re now starting a barrel aging facility,” he says. “I can say I want to turn this building into nothing but barrels, and they’ll say, ‘OK, I trust you.’”

With the barrel-aging facility up and running, Treanor has a barrel-aged Brett Saison in the works, plans for a 100-percent Brett IPA, and a two-way collaboration with Dublin-based Teeling Whiskey, where barrels will be returned to the distillery after aging Galway Bay’s Imperial Stout to create a Stout-seasoned whiskey. And Treanor’s work with Teeling is just one of the partnerships he has fostered. A collaboration with Chicago’s Begyle Brewing took shape after a chance meeting in Ireland in 2013. That encounter—the first collaboration between brewers in the United States and Ireland—resulted in Goodbye Blue Monday, an Oatmeal IPA.

“Deciding on a beer to brew, we went back and forth on styles, but settled on a beer that would be a mash-up of Irish and American culture,” says Kevin Cary, co-founder and owner at Begyle. The US-hopped beer made with Irish oats debuted last August and was so well received in Galway Bay pubs that it has remained in production since.

Combine O’Connell and Walsh’s business acumen with the built-in market their pubs provide for Treanor’s experimental beers, and it’s no secret why Galway Bay has taken the lead in Ireland’s brewing renaissance. So what’s next? By declaring 2015 Galway Bay’s year of collaboration, Treanor shows no signs of abandoning his trailblazing ways anytime soon.

On Tap
Full Sail: American hops, including Columbus, El Dorado and Cascade, and a clean malt bill make this Pale Ale Galway Bay’s best seller. 5.8% ABV
Bay Ale: This malt-forward Irish Red Ale clocks in at just 33 IBU and features
both European and American hops. 4.2% ABV
Stormy Port: A dry, fairly robust Irish Porter brewed with intense flavors of coffee and dried fruit. 4.8% ABV
Buried at Sea: Treanor’s answer to sickeningly sweet Stouts, this Chocolate Milk Stout is complex yet still light and drinkable. 4.5% ABV
Of Foam and Fury: Beoir’s beer of the year in 2014, this Double IPA pours hazy orange with a fruity, tropical nose and tastes of juicy citrus and resinous hops. 8.5% ABV
Via Maris: This hop-forward table beer is brewed with a rotating hop addition to highlight each variety’s complexity and flavor, from Chinook to Amarillo and Mosaic. 3.5% ABV ■ 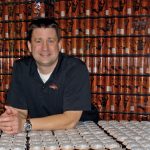 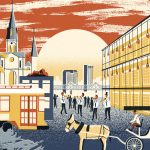