Where to Drink in Missoula, Montana 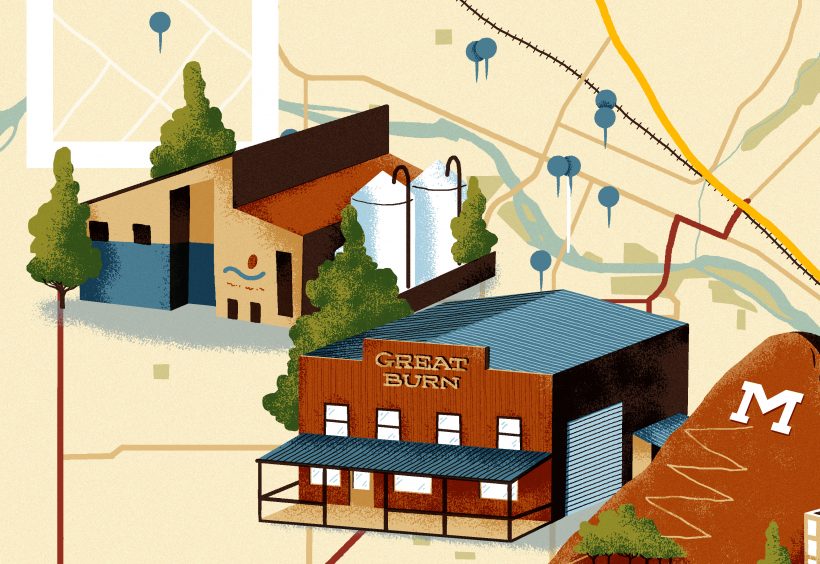 The first commercial brewing operation in Missoula began in 1874 when George Gerber started brewing and selling his beer. At the time the town’s population was in the hundreds, but it soon grew. The University of Montana opened in 1893 and, by 1900, over 4,000 people called Missoula home. Gerber officially dubbed his operation Garden City Brewery, honoring the town’s “Garden City” nickname, as it was often warmer than the rest of the state.

As an isolated region, this riverside lumber town relied on local producers for their brewing ingredients, as brewers here still do today. Currently, over half of the malted grain used by Montana breweries is grown in state and Montana now ranks second in the US in breweries per capita. Missoula, a university town of 69,000 avid skiers, hikers, fishers, river runners, mountain bikers, and beer drinkers, offers a healthy sampling.

However, when Prohibition began, Garden City Brewery switched over to soda and low-ABV “near-beer.” Normal operations restarted just days after Prohibition’s repeal under the new name Missoula Brewing Company. A number of other breweries popped up over the years, but they eventually all closed, with Great Falls Breweries the last to shut down in 1968.

The city went almost two decades without local beer until Bayern Brewing [4.22, bayernbrewery.com] opened its doors in 1987. Located in the Riverfront neighborhood, Bayern’s German-trained brewers follow the 1516 German purity law Reinheitsgebot by limiting ingredients to water, barley and hops. Sample Bayern’s Amber Lager, Dragon’s Breath, a Dunkelweizen, or Montana Helles Lager in the tasting room and grab a growler to go. The brewery also offers seasonal specialties such as Oktoberfest in the fall, Doppelbock in the winter, and its Face Plant Weizenbock, or Doppel Weizen, throughout ski season. Pair lagers with German snacks in the tasting room, including brats, pretzels and Landjaegers, a Bavarian beef jerky.

Next to open was Big Sky Brewing in 1995. Known for its critter-themed beer names, including Moose Drool Brown Ale and Montana Trout Slayer wheat ale, Big Sky focuses on English-style ales, producing more than 46,000 barrels per year. Peer from the mezzanine into the brewhouse, cellar and bottling line, or take a seat on the grass for one of the brewery’s popular summer concerts, featuring bands like Wilco and the Decemberists.

After a push by owners Tim O’Leary and Suzy Rizza to legalize on-premise consumption of beer, KettleHouse Brewing Company was the first brewery in the state to pour beer in its tasting room in January 2000. As demand grew, KettleHouse was also the first modern Montana brewery to start canning. All three of its flagship beers—Cold Smoke Scotch Ale, Double Haul IPA and Eddy Out Pale Ale—are available in this portable package, ideal for ski or river trips, where glass bottles are often banned. 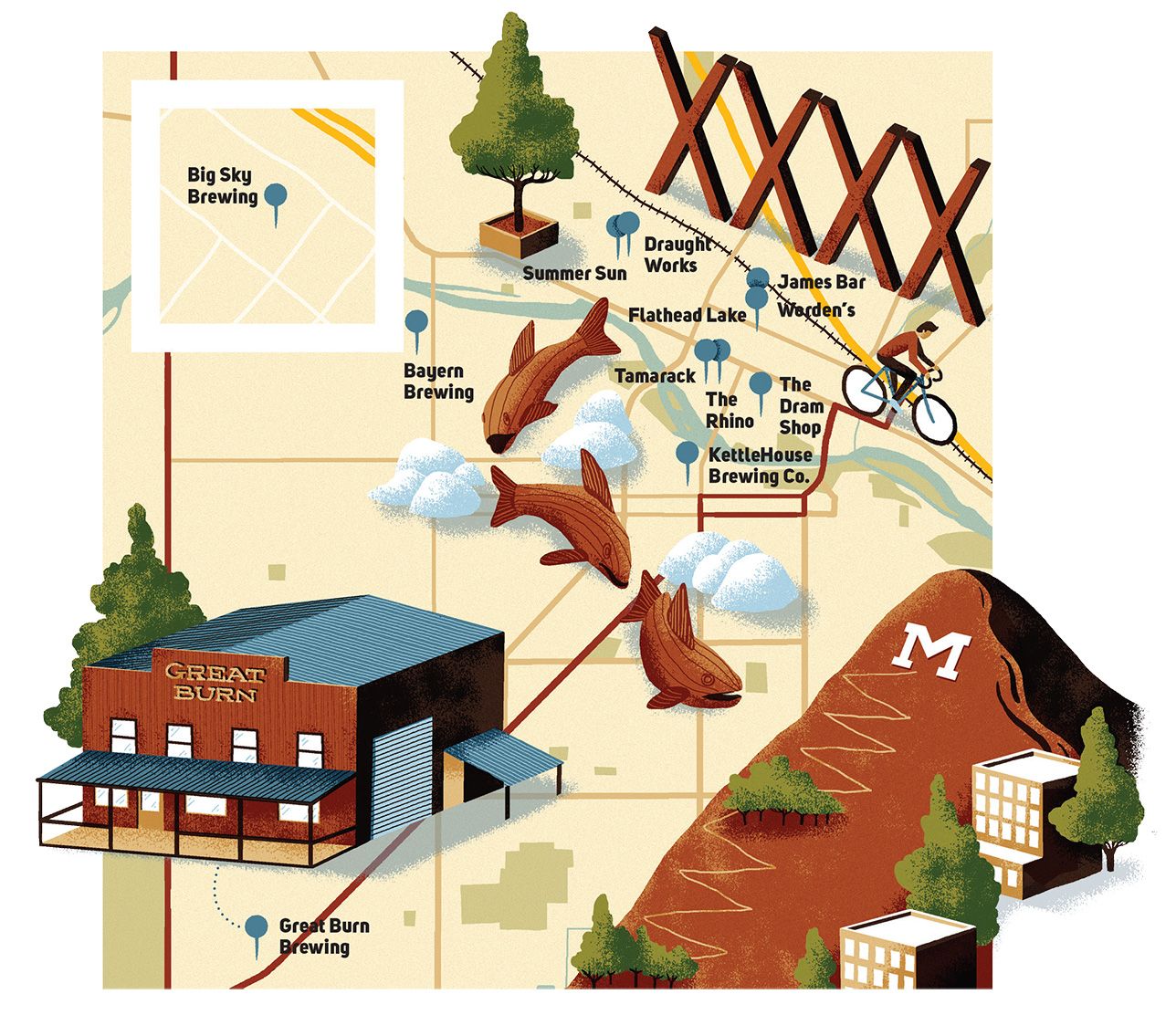 North of the Clark Fork River, in the Westside neighborhood, Jeff Grant and Paul Marshall purchased a historic 1931 recycling center and turned it into Draught Works. With exposed wooden beams, bricks and a seating area adjacent to the brewing equipment, Draught Works has an industrial feel. The brewery’s Scepter Head IPA, brewed with seven different hops, took home gold at the 2014 Great American Beer Fest.

Around the corner on Spruce Street is Summer Sun Garden and Brew. This three-pronged shop features homebrew supplies, gardening equipment and a wide selection of local and regional beer as well as specialty and hard-to-find items such as Deschutes Not The Stoic Quad, New Belgium La Folie Sour Brown Ale and He’Brew Funky Jewbelation.

The heart of Missoula offers a concentration of popular beer bars and breweries. James Bar [jamesbarmontana.com] is a friendly local hangout that opened in 2007 with the goal to elevate the city’s bar food. You’ll find selections from local breweries like KettleHouse, Big Sky and Bayern on tap and in bottles, as well as other Pacific Northwest beers. Snack on gourmet sliders, shared plates such as “rasta rings” of jerk-seasoned fried onions and larger plates including Montana sirloin, bison meatloaf and shepherd’s pie.

Next door is Flathead Lake Brewing Company’s Missoula Pubhouse, located 100 miles south of the main brewery in Bigfork. Enjoy conversation in one of the first floor’s private booths, or head upstairs to the lively second floor for trivia. The top floor is the classy Galaxy Lounge, complete with open-air balconies and mountain views. Try pairing Rising Sun Espresso Porter, a collaboration with Colter Coffee in Kalispell, with the Mandolin burger, an espresso-rubbed beef patty topped with bacon, cheddar, caramelized onions and a Porter BBQ sauce.

Across the street, Missoula’s first grocery store, Worden’s Market & Deli, is a great place to pick up local beers from the cooler or bombers from the likes of Deschutes, Alaskan and Dogfish Head. Worden’s also offers kegs to go and a deli serving up panini, homemade chili and The Whoppa, a ham, salami and provolone sub with a signature sauce. After bar hopping downtown, Worden’s is a must-stop for late night pizza on Fridays and Saturdays until 2:30 a.m.

With peanut shells littering the floor, The Rhino is a local dive bar legend with the largest beer selection in Missoula. Established in 1987, this one-room tap house doesn’t serve food, but it has over 50 draft beers, ranging from Piraat to Ninkasi. Play pool or shuffleboard and enjoy the lively atmosphere.

Located about 100 miles south of the flagship brewery in Lakeside, Tamarack Brewing Company Alehouse and Grill has two levels: a downstairs sports-bar area and a more upscale bar and restaurant on the second floor. Most items on Tamarack’s menu have a suggested beer pairing. Try the blackened cod tacos with a pint of Lakeside American Pale Ale. Mouth-watering beer battered garlic bleu fries are available as a side.

Missoula’s beer scene continues to grow. Three miles south of downtown, Great Burn Brewing is the area’s youngest brewery. Opened in the fall of 2014, this 5-barrel brewhouse plays up its fire theme with flagship beers like Great Burn IPA and Smoke Chase Porter, made with smoked peat malt. Enjoy a pint in the sunny taproom or on the deck through the garage-style door. ■ 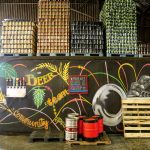 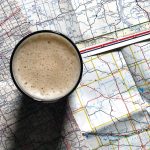