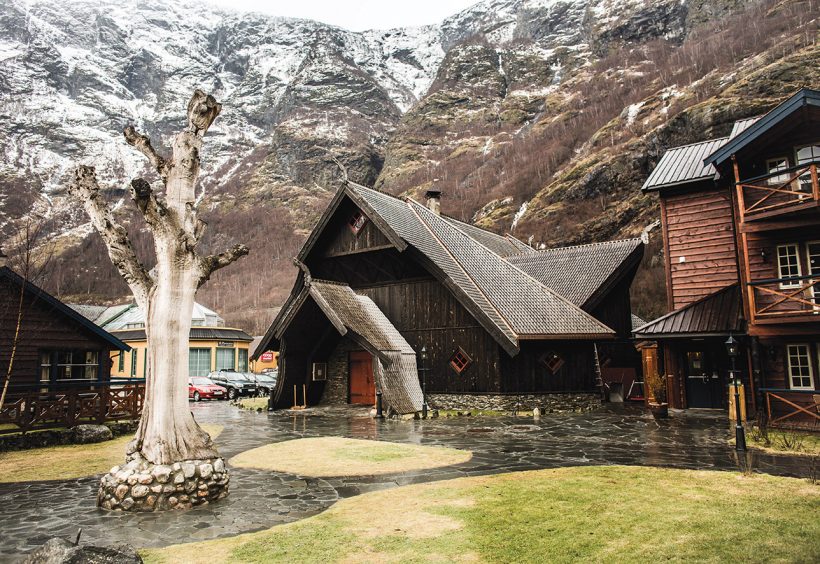 Ægir Brewery in the Flåmsbrygga hotel in Norway. | Photo by Colin Eick

True to style, the first was supposed to be Stone Brewing Company. Way back in 2009, the producer of Ruination, Old Guardian and other broad-shouldered brews made one of its typically bold press announcements: Stone wanted to be the first American craft brand to open a brewery in continental Europe.

At the time, the idea seemed pretty lofty—and maybe even slightly crazy. An American craft brewery was planning to produce its mega-hopped, high-octane ales in the homeland of traditional Pilsners? Europe’s 800-year-old, family run breweries were supposed to take lessons in beer from a brash American name that hadn’t even existed for two decades? Forget crazy: the idea was damn near presumptuous. But if anyone was going to elbow his way into the Old World beer scene, the Arrogant Bastard was probably the right guy to do it.

And then Brooklyn got involved. Like something out of the old East Coast-West Coast hip-hop rivalry, NYC’s best-known craft producer stepped up, grabbed the mic and completely stole Stone’s show. Before the boys from San Diego had even settled on their future European location, Brooklyn fired off its own press releases, announcing the arrival of its Nya Carnegiebrygerriet brewery and restaurant, which opened in Stockholm, Sweden, in the spring of 2014.

As it turned out though, Brooklyn hadn’t quite pulled off what Stone wanted to do: Nya Carnegiebrygerriet was not going to be a Brooklyn in Europe, and the announcements clarified that no Brooklyn beers would be made there. Instead, Nya Carnegiebrygerriet was created as a standalone brand in partnership with the Danish industrial powerhouse Carlsberg. After the dust cleared, it looked like Stone would still be able to call its upcoming location in Berlin the first American craft brewery in Europe.

At least until Missouri’s Urban Chestnut bought a shuttered brewery in Wolnzach, Bavaria, in early 2015, with plans to refurbish the place and reopen it as a branch of Urban Chestnut. Earlier this year, Stone and Urban Chestnut were locked in a race to see who could start brewing first, and with that, earn the bragging rights as the first American craft brewers in continental Europe.

The only problem? Just like the scene in The Matrix Reloaded where Neo meets the Architect, this moment already happened. Whether the first American brewery in Europe is Stone, Brooklyn, Urban Chestnut or even 3 Floyds—which launched Copenhagen’s WarPigs brewpub in partnership with Mikkeller earlier this year—is really a moot point, or maybe just a question of semantics. To say nothing of the United Kingdom, American craft brewers have been producing beer in mainland Europe for years, putting in time at breweries big and small, releasing American-style IPAs and DIPAs in the homeland of the delicate Pilsner and the elegant Kölsch. And yes, quite a few of these guys even have their own breweries.

They’re definitely not laughing anymore. Today, beer lovers in Italy utter Mike Murphy’s name with a tone of genuine reverence, much like the way their grandmothers might invoke a favored saint. How else would you talk about the guy who brought the first IPAs to your part of the world?

Understandably, those initial IPAs and other US-inspired brews—produced at Murphy’s own Rome Brewing Co., on a tiny, 200-liter, or 1.7-barrel system—made quite an impression. In that era, right around the turn of the millennium, Italy and much of the rest of continental Europe had never tasted anything like them.

“Back then, the only craft beer in Europe was traditional beer,” Murphy explains. “There was almost no craft beer. At least in Rome, there was nothing going on.”

Murphy’s story seems like a typical tale for American craft brewers in Europe: for whatever reason—work, love, random chance—a guy from the US who is hooked on craft beers gets stuck in Europe, and after a while he starts trying to recreate the stuff from back home. In Murphy’s case, he says he originally intended to go back to the US after a few years, hopefully after having made a name for himself in Italy. Instead, he sold Rome Brewing Co. in 2004 and decamped for Denmark, where he worked at Copenhagen’s GourmetBryggeriet and ran with a crew that included Mikkel Borg Bjergsø (of Mikkeller), Jeppe Jarnit-Bjergsø (of Evil Twin), Shaun Hill (of Hill Farmstead), and Andreas Kissmeyer (now of Kissmeyer Beer & Brewing). After several years in Denmark, Murphy was offered the chance to help set things right at a faltering brewery located in Stavanger, Norway, in 2010. He’s been making beers at Lervig Aktiebryggeri ever since.

Brewing at Lervig is wildly different from Murphy’s original setup in Rome. Instead of inefficient, 200-liter batches, Murphy’s current brewhouse rocks 250 hectoliters (meaning 25,000 liters), the equivalent of about 213 US barrels. With that kind of size, Lervig is a brewery that distributes fairly widely, including the first Norwegian craft beers in cans and the country’s first Pale Ale available in supermarkets. Murphy might not have achieved his initial dream in Italy, but up in Norway he can reach a much broader audience.

But Murphy is not the only American brewer changing things in Norway. Several hours north of Lervig, Evan Lewis runs Ægir, his own award-winning microbrewery. Other than Nøgne Ø and Haandbryggeriet, the initial pioneers in Norway, Lewis notes that the country was practically devoid of craft beer when he opened Ægir at the Flåmsbrygga hotel in 2007.

“It was a pretty sparse landscape for craft beer at that time,” he says. “There’s no question about it, craft beer is now a big deal in a lot of countries worldwide. In Norway, we’ve had a major explosion. We used to have nine craft breweries if you include every little café that brews in the kitchen or something, and now we’re well over a hundred.”

Not every country in mainland Europe is quite so far along. Plenty of American brewers are working in countries that are only just now starting to see craft beer take off, which is a big part of the appeal of being there.

“It’s like going back to 1995 in the States, or to 2000. That’s what’s happening here now,” says Scott Vanover, the co-founder of Edge Brewing in Barcelona, Spain. “It’s like going back in time and being able to relive the explosion of craft beer. Only this time, we have a crystal ball. We know exactly where this thing is going. It’s exciting for us to be involved in the early growth of craft beer here in Spain and Europe.”

Founded by Vanover and a fellow American, Alan Sheppard, Edge Brewing quickly earned international renown: early this year, RateBeer.com ranked Edge as the best new brewery in the world. Not bad for a brewery in a country not normally considered a beer paradise. Part of the credit has to be given to the kind of beers Edge is making. Their branding emphasizes that Edge is “American craft beer brewed in Barcelona.”

“It’s not that Americans are better brewers or anything like that,” Vanover says. “It’s just that we had a big head start. And we were not handcuffed by tradition.”

That early start means that Edge gets to be at the forefront of what’s happening in Spain. Unlike brewers back home who can only reminisce about the early days of craft, Vanover is able to interact with customers who are learning about good beer ex nihilo.

“We do a lot of tasting events at the brewery, and it’s kind of fun because you can see their eyes light up when they try craft beer for the first time,” Vanover says. “Here we get to be the new kids on the block.”

Even in countries that are more accustomed to drinking good beer, American brewers are riding the new wave. In central Europe, Slovakia—a neighbor and a former federal partner of the beer-crazy Czech Republic—drinks more beer per capita than the United Kingdom, and the country’s easy access to Czech breweries means that Slovaks know what good beer is supposed to taste like.

But that doesn’t mean they’re not open to new things.

“Craft beer is just starting to take off here, and we decided to try to be part of it,” says Matt Wirtz, the owner of the soon-to-open Expat Pivovar in Bratislava, the country’s storied capital. “There’s definitely more of an appetite for it. People who used to drink local brands are interested in trying something new.”

In this case, that “something new” is relative. For most Slovaks, it’s pints of American-style IPAs, DIPAs, Brown Ales and Imperial Stouts—beers they’ve probably never tasted before, unlike the traditional pale lagers they grew up with. But for Wirtz, who also co-founded Bonfire Brewing in Eagle, Colo., these American styles are what’s most traditional.

“I’m trying to stick to things I know best,” he says. That means that right in the middle of a historic capital—a city filled with beautiful Gothic arches, Baroque churches and lots and lots of cobblestones—Wirtz is gearing up to brew the same kind of beers he used to make back in Colorado, where he met his Slovak-born wife. After relocating to her homeland, Wirtz noticed two things: a lack of beverage options, and a sudden interest in good brews.

“From two years ago when I first started coming here, there are at least twice as many small breweries as there were.” And by October of this year, Expat Pivovar should be one of them.

There are others, all over continental Europe, bringing US-style brewing to the Old World. In the Czech Republic, just outside the historic brewing city of Pilsen, Chris Baerwaldt opened his own craft brewery, Pivovar Zhurák, in 2013. A former employee of California’s Hoppy Brewing Company, Baerwaldt has even produced some of Hoppy’s beers in Europe.

But Hoppy doesn’t own Zhurák, and Bonfire doesn’t own Expat Pivovar. Which brings us back to the original issue, and what really is a question of semantics: If we overlook all the Americans who moved to Europe and started brewing American-inspired beers there, which already-existing American craft brewery will be the first to open its own European brewing facility? And for Pete’s sake, why does it matter?

At Urban Chestnut in St. Louis, co-founder and brewmaster Florian Kuplent makes it clear that one of his interests concerns logistics since Urban Chestnut is already selling beers in Germany: this way, in addition to creating new products like a hop-forward Helles called Hopfenperle, some of its existing beers like Zwickel can now be brewed in the company’s Wolnzach location instead of in Missouri. There’s an aspect of homecoming, too, since Kuplent is originally from Germany, having done his brewing apprenticeship not too far from Wolnzach in the Bavarian village of Erharting. With these two big reasons behind it, Urban Chestnut’s move into Europe makes a lot of sense.

But unlike many of the American craft brewers in Europe, the European brewer in America sounds a bit more cautious about the future of craft beer in the Old World, noting that many German beer drinkers are conservative by nature and adding that it might take a lot of work to convince lovers of Europe’s most traditional beer styles to try something entirely new.

“With some effort it will be possible to educate beer drinkers and get them to start appreciating styles they didn’t know existed,” Kuplent says. “That’s why we purchased the brewery in Wolnzach.”

And just before you can ask him when he might mash in for the first time, Kuplent continues in a voice that is strangely quiet, and definitely not brash or arrogant.

“We started brewing a few days ago, actually.” ■ 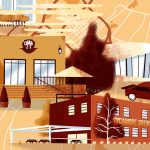 Previous: Where to Drink in Charlotte, North Carolina 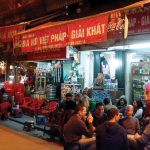