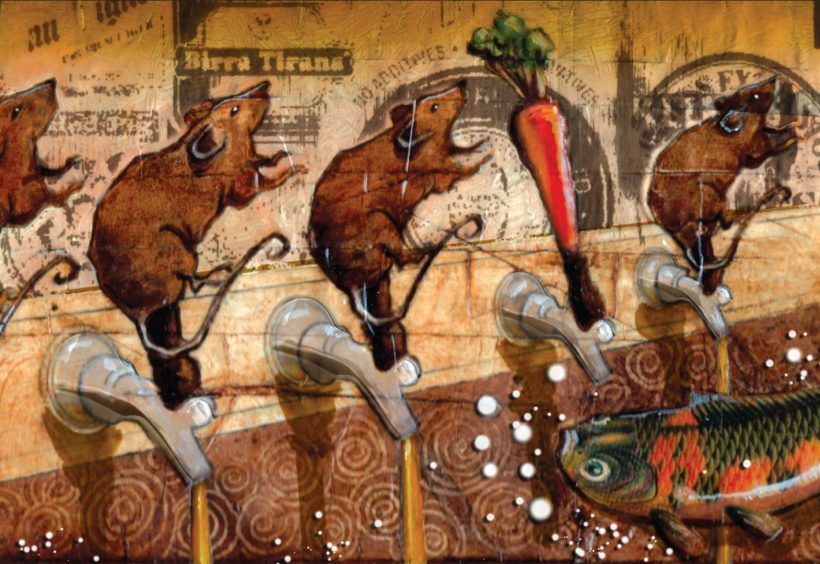 Not all beer is veggie-friendly

The Boston punk band Dropkick Murphys sing a song called “Good Rats,” which repeats an old myth about Guinness: In the brewery’s early days, the story goes, rats were drowned in the vats to give the beer its distinctive taste. Typical lyrics: “Like a bunch of drunken pirates prepared to walk the plank / They drank, they sang, they took a plunge, and in the beer they sank!”

It isn’t true, of course. But, as it turns out, the beer still isn’t vegetarian.

This year, the Vegetarian Society in England gave Guinness its “Imperfect World Award,” an inglorious honor bestowed upon the foodstuff it most wishes were vegetarian. The Society’s complaint is that Guinness, like many beers, uses a fish-derived product called isinglass as a clarifier. It’s unlikely that much or any of the isinglass makes it into the beer people drink, but it’s enough to upset strict vegetarians or vegans. In a statement, Guinness says it’s seeking alternatives to isinglass, but that it hasn’t yet found something “as effective and as environmentally friendly.”

Isinglass isn’t the only animal product used in brewing, and vegetarians may find that some of their favorite brews aren’t up to their standards. But don’t despair: A little research will go a long way. Many beers, including some of the most popular, are devoid of animal products.

The Vegetarian Society says it has “working relationships with many of the big brewers, as most of them do have a range of suitable beers in their stable.” Good lists of veggie-friendly beers can be found online; there’s a particularly comprehensive one at http://homepage.ntlworld. com/geraint.bevan/Vegetarian_ beers.html.

If this summer is like the last one, it’ll be hot times for Coors Light. The company did better then against its major competitors, Miller Lite and Bud Light, and there’s a good chance it was because summertime drinkers remembered Coors’s single-minded marketing: Coors is cold. Its advertisements stress it, and Coors keeps releasing promotional items to hammer the point home—cold-retaining cans, an iceberg-looking tap that pours Coors at between 28.5 and 31.5 degrees and, most recently, a bottle whose label changes color when the beer hits about 40 degrees.

If Coors seems to sing a one-note song, there’s a reason: They’re banking on drinkers equating coldness with quality. “Their advertising people have been very disciplined about that being the only thing they ever say about it,” says Jeremy Mullman, who covers the beer industry for the marketing magazine Advertising Age. The theme also plays into the company’s history: Coors was one of the first breweries to use cold filtration in the 1970s, and it’s based in the Rocky Mountains. “It’s part of their brand identity. It’s hard for Milwaukee or St. Louis to conjure the same sort of romance,” Mullman says.

Coors isn’t alone. Other breweries have touted their beer as being especially cold, and a restaurant company is considering launching a national chain called 29 Degree Tavern, promising to serve all draft beer at that temperature.

But while cold may help sell beer, but does it help drinkers enjoy their beverages? Every style of beer has a particular temperature at which it should be best enjoyed, but it’s generally agreed that even light beer’s taste is diminished below 40 degrees. Then again, when you’re mass-producing light beer, lost taste might just work in your favor.

A surprise package arrived at Chris Scott’s home recently, and he loved even the address label. It was mailed to “Chris Scott, beer blogger,” and inside were two six-packs of BridgePort Brewing’s Haymaker. Scott quickly posted pictures of the package and the beer on his blog, hailtheale.com, promising to review them soon.

As breweries look for ways to announce their latest beers, bloggers are increasingly part of their plans. Beer bloggers may not have the same clout as professional reviewers, nor the same reach as newspapers or magazines, but they have devoted followings and can help spread the word about good new brews. “When we launch a new product, we want everybody and their brother to know about it,” says BridgePort Brewing marketing manager Paula Johnston.

And it’s not just beer they’re looking to promote. Jon Abernathy, who blogs at thebrewsite.com, said some breweries have asked him to review their new packaging and advertising. Widmer Brothers Brewing recently sent him a six-pack with new packaging, promotional material, two glasses and a lemon. Alan McLeod, who blogs at beerblog.gensx40.com, says he even gets beer books to review.

While they appreciate the free stuff, bloggers say they don’t want their readers to think they’re shills for the breweries. They often explain on their blogs that the beers arrived for free, and that they’re under no obligation to give it a good review. But, they admit, getting beer swag does feel good.

“I just think it’s really cool that brewers are reaching out to bloggers like this,” says Abernathy. “There’s a kind of thrill I get when I receive a promo that is kind of validating—kind of a ‘Wow, I’m not blogging away here for nothing’ feeling.”

Order up a slice of beer Tom Seefurth knew he was on to something when he created a beer that tastes like pizza. It was a hit at parties, and a local restaurant started serving it up. He used real pizza in the mash, and the final product, he says, tastes just like that moment after you’ve eaten a slice of pizza, and then started washing it down with some beer. There are the spices on the back of the tongue, and the beer in the front. Couldn’t be better.

But it wasn’t until May that he completed the highly important Everyman’s trifecta: pizza, beer and television. Seefurth, a homebrewer and real estate broker in St. Charles, Ill., managed to lure a local TV news crew into his garage-turned-brewery and showed off the pizza beer. The reporter took a sip, and made a crack about drinking on the job. Then, Tom’s life got a lot more exciting: The segment aired and became an internet hit, and media from around the country came calling.

“This beer is a frickin’ world phenomenon,” Seefurth says, after a day of doing radio interviews. “I’m not kidding you, man. I have been talking to people all over the country and Canada. This is like a homebrewer’s dream, I think.”

Now he’s hoping to make it a true homebrewer’s dream, by parlaying the publicity he’s enjoying into a national launch for the beer. He’s calling it “Tom Seefurth’s Mamma Mia Pizza Beer,” and he’s listening to all offers. He’d be interested in selling it, but he’s really hoping for someone to come along and finance a brewery for him. Big dreams? Maybe, but Seefurth’s sure there’s reason to be confident.

“We’re so excited about it, because we created something that nobody else in the world did, and the world thinks it’s cool,” he says. “How’s that make you feel?” ■ 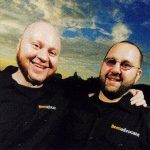 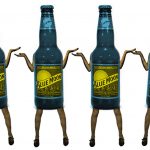