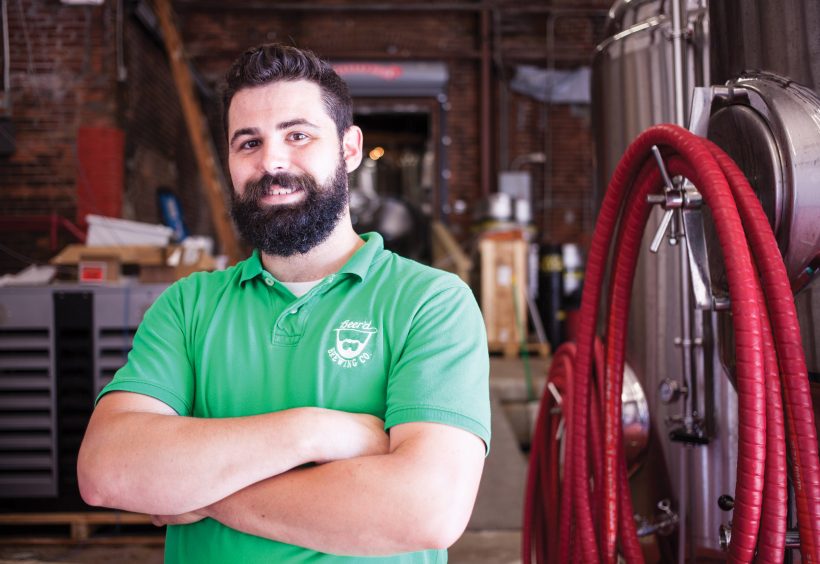 Aaren Simoncini launched the Beer’d Brewing Company as a vehicle for delivering fresh, creative, and locally brewed beers to his corner of southeastern Connecticut. He started small, pushing out 250 barrels on a nano system in his first year. Exponential growth has led to Beer’d growing deeper, not wider; the brewery treats its customers to a dizzying variety of recipes, but sells the vast majority of its beer over its tasting room counter. “We’re not going to make just another Pale Ale, but we’re not going to be different for the sake of being different, either,” Simoncini says. “We’re going to be different because we think it’s better, or unique. When you just stick to doing what’s been done and done and done, it’s the same thing as 50 million others on the shelf. You don’t tell a chef, you have to make your stew like this, because it’s in the Betty Crocker cookbook. There’s art to it.”

1. Get schooled
For most of his college years, Simoncini was drinking light macro lagers, the cheaper, the better. But a college class changed that—and his own trajectory. A finance major, Simoncini wrapped up his major coursework early, so he decided to cruise toward graduation with a tasting class on world beers. It was a crash course in quality, full-flavored brews from the US and Europe, and in the materials and techniques that make the world’s greatest beverage. And it introduced Simoncini to the simple but life-altering fact that beer doesn’t have to come from a large, remote factory.

2. Embrace sweat, not equity
Simoncini spent two years writing the business plan that took him from serial homebrewer to pro. He sketched out a plausible plan that would have had him sending over 1,000 barrels out the door in his first year. The numbers would have worked, he says. But Simoncini wasn’t comfortable with what it would have taken to launch on that scale—raising enormous sums of money, and either taking on bank loans, or turning over pieces of his brewery to outside investors. Instead, Simoncini launched Beer’d as a 3-barrel nanobrewery that he could run as a side job, and ramp up as the brewery came into its own.

3. Hang a shingle
Beer’d Brewing’s shoestring budget came, in part, from a founder’s club of customers who bought into the brewery sight-unseen. “It helped us with cash flow,” Simoncini says, “and on day one, we had 100 people lining up with growlers in hand, and they were filling up every week.” He had initially planned to rely on keg sales to bars and restaurants, but the founders ended up becoming the brewery’s business plan: They were loyal customers and they spread the word, and Simoncini sold so much beer out of his tasting room that he didn’t have to chase down accounts to distribute to. Direct sales threw off cash to finance a steady buildup in brewing capacity. And by selling beer directly to his customers, Simoncini knew what they wanted from him, and what they didn’t.

4. Mix it up
“It wasn’t difficult to let go of our initial business plan,” Simoncini says. “If you’re running a business, you’re a fool if you say, this is what I like to drink and screw the customers, because you exist to provide them with a product they’re looking for. And for the most part, it’s been easy to align what we’re doing with what they want.” He gets that alignment by keeping his offerings fresh; in three years of business, Beer’d has sold nearly 60 different recipes. “I like eating cheeseburgers, but I don’t eat them every day,” he reasons.

5. Forge connections
The ties Beer’d has forged with its customers speak to a larger phenomenon in the modern craft industry: Consumers have a universe of choices, so young breweries need to be deliberate about how to connect with them. “Go into any liquor store and see the proliferation of beers on the shelves—trying to stand out is very difficult now, especially if you don’t already have a name,” Simoncini says. “If you’re a start-up from the middle of the country, and you put a bomber of IPA on the shelf, what’s selling it? It helps us to have that personal connection, to have people come into the brewery, for this to be a collaborative process.”

6. Brew for now
Simoncini has earned a rabid following because of beers like Hobbit Juice (a Double IPA overflowing with Nelson Sauvin hops) and Dogs and Boats (a Double IPA stuffed full of Citra and Mosaic). Across the board, the emphasis is on flavor and aroma, not bitterness. Beer’d is part of a wave of New England breweries helping to redefine what hop-forward beers smell and taste like. Simoncini’s hoppy beers forego aggressive bitterness in favor of outrageous tropical notes. “The industry is evolving,” he says. “A lot of it is access to new information and new ingredients. It’s cool to see people putting a lot more focus on unique aromatic hops, and less focus on making these big, bitter hop bombs. It’s Vermont IPA. That shouldn’t even be a style. It should be, this is an IPA now.”

7. Bend the guidelines
The heavy emphasis Simoncini puts on whirlpool and dry hopping carries with it definitional challenges. His Citra Pale Ale, 8 Days a Week, drinks like an IPA, “but it has next to no IBUs, so I can’t rightfully call it an IPA.” He has Double IPAs hovering around 60 IBU—a measurement that makes them, on paper, less hoppy than some West Coast Pale Ales. “These are guidelines, not frameworks,” Simoncini argues. “I want to brew to a flavor profile, not the numbers. I want the beer to taste amazing.”

8. Convert a noob
Beer’d Brewing’s customer-centric orientation means that Simoncini embraces the role of craft beer evangelist. His personal tastes run toward juicy IPAs. But he always has Whisker’d Wit, his bridge beer, on tap, because he actually likes it when tourists who drink Bud come into his brewery and ask him if he has anything that tastes like Shock Top. “Yeah, I do, but it’s made on this system you see here, by the guy behind the counter,” Simoncini says. “We get a lot of craft beer noobs. We have to have something for them, and for the people who are traveling here looking for the next best hoppy beer.”

9. Give it a twist
Whisker’d Wit owes its existence to Allagash White, and Simoncini isn’t shy about saying so. “Before I had White, I wasn’t into wheat at all. It was not my thing.” Allagash’s pioneering wheat, and Simoncini’s playful riff on it, both show that approachable beers can also be complex and worthy of geekery. And they also show that craft brewers exist on a continuum, with every recipe and batch building on what came before. Whisker’d Wit isn’t spiced with coriander, and it’s fermented with a high-gravity Trappist yeast, but Simoncini still calls it a Wit. It’s what Wit is right now, to Beer’d and its drinkers. “It has its own twist,” Simoncini says. “If you don’t deviate from a standard, how will you create your own thing?” ■ 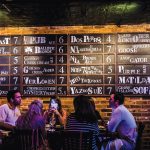 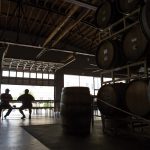