Ale in the Family: As Craft Brewing Matures, Sons and Daughters See a Future in Ales and Lagers 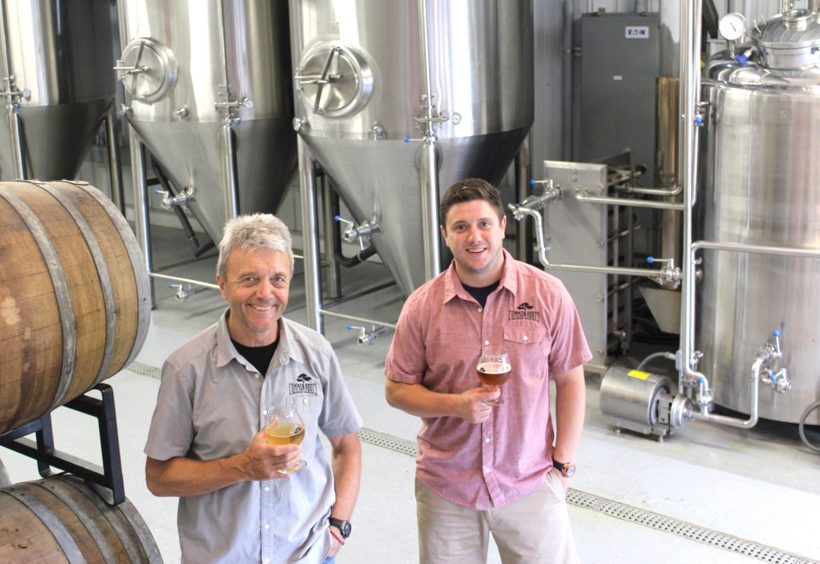 Bert Weber, left, with his son christian Weber, right, in the brewhouse at common roots Brewing co., which the duo co-founded in 2014.

In the foothills of New York State’s Adirondack Mountains, 200 miles from Manhattan’s concrete canyons, a father and son have turned a door company’s warehouse space into a creative playground. Here in South Glens Falls, Christian and Bert Weber started down a path together when Christian, who was looking to change careers, approached his father as a potential business partner.

“We always had homebrewed together, and when I realized I wanted to own my own brewery, I was looking for a business partner, and my father was looking for a second career,” Christian says. “We did all the renovations ourselves. It’s been a rewarding experience, but certainly a lot of work.”

And so, when Common Roots Brewing Company opened in December 2014, it became the newest family business on Saratoga Avenue. Fortuitously, the two men have complementary skill sets—Bert has a background in construction and landscape design, while Chris brings the beer-making expertise he acquired at White Birch Brewing. “We bounce off each other,” Christian says. “It’s a fun project. Christian and I have a great relationship, however since starting the brewery we have had to find ways to balance our business partnership and father-son relationship,” Bert adds. “We both bring individual strengths to the brewery and it has been really interesting to see things evolve.”

Historically, all breweries were family businesses. Generations of Busch fathers and sons ran Anheuser-Busch from Adolfus in 1880 (who himself took over from his father-in-law, Eberhard Anheuser) to August A. Busch IV who served as CEO until InBev bought the company in 2008. D. G. Yuengling & Son, the oldest continually operating brewery in the country, is still fully family owned and operated, with each new generation taking ownership from its predecessor. And multigenerational commitment is increasingly common at some of the country’s older craft breweries, like Bell’s and Sierra Nevada. 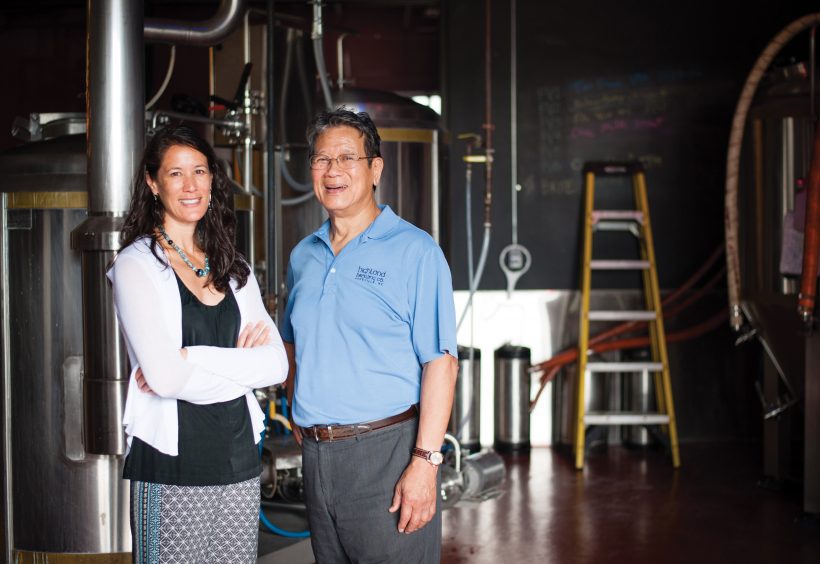 Leah Wong Ashburn, left, gradually worked up to her current position as president of Highland Brewing, which her father Oscar Wong, right, founded in 1994. | Photo by Carrie Turner

Today, not only are parents handing brewing operations down to their sons or daughters, but more and more, parents and their adult children are going into business together. Children who grow up in the brewery business often demand to be a part of it once they reach adulthood. In North Carolina though, Highland Brewing president Leah Wong Ashburn, daughter of founder Oscar Wong, says her request to work at her father’s brewery was met with a resounding “no.”

“He wanted me to find my own way,” Leah says. “That part was really important, because I got to learn the things he’s always talked about as the most important. Relationships, being a good citizen wherever you are, and also, experiencing success and failure and working through both of those things without the safety net of being in a family business.”

As for what changed her mind about joining the brewery her dad opened in 1994, Leah says, “It took many years circling around that, and we kept talking about it. And eventually it became the right time. My priorities shifted, like, the career and the money part, that was becoming less fulfilling to me. And what I saw dad doing and what I saw Highland doing, in Asheville, and what it was growing into in the Southeast became more important to me.”

She started out working in sales in Charlotte, where she continued to live, easing into the business by repping popular Highland beers like Gaelic Ale and Oatmeal Porter before committing to it fully by moving to Asheville. Once she did, she served as the VP of marketing until early 2015, when she stepped into her role as Highland’s new president.

At Birdsview Brewing Company, a family run brewery and brewpub in Birdsview, Wash., another father-daughter team also came about after some initial paternal reluctance. Owner and head brewer Bill Voigt thought that the work would be too labor intensive for his daughter Julie, who worked at the pub’s deli and bar. “As far as Julie brewing, I didn’t want her to do that,” he says. “I thought my son might start helping me out, but he was bartending at the brewpub and seemed pretty happy with that. I didn’t think she’d be a good fit, and I thought, ‘I know how to cure her, I’ll put her [to work] washing kegs.’”

His plan failed though, and nearly a decade after opening, his (blonde) daughter is totally at ease in the brewhouse, mashing batches of Ditsy Blonde or Bill’s Pils. According to Julie, she first wanted to experience a brew day so she could better explain the process to customers. “I didn’t have an interest in brewing until I tried it. That was my light bulb moment,” she remembers. “Now, there is no other way I’d rather spend my days than making beer.”

And Bill couldn’t be happier. “I really wouldn’t want to do it with anyone else—we work very well together,” he declares. “We know what the other is thinking, and if something needs to be done, it gets done without talking about it.” 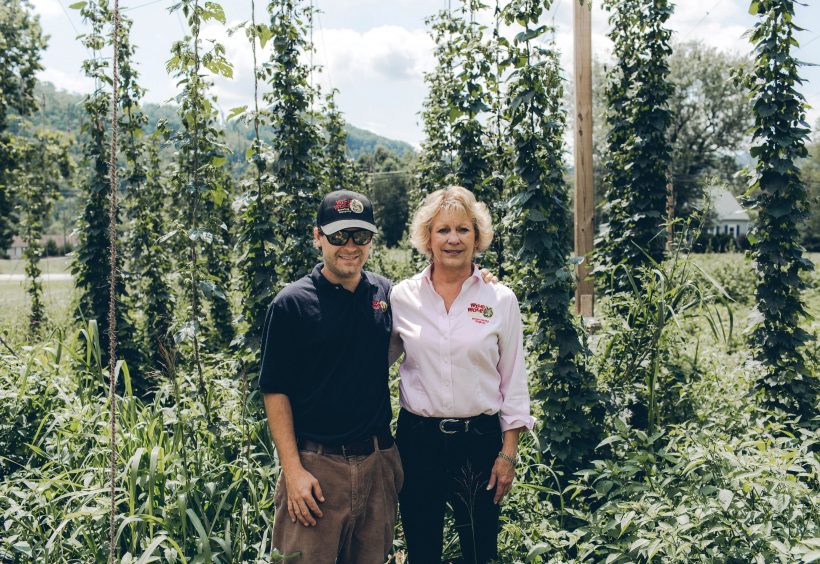 Danny Wolf and his mother Mary Wolf outside of Wild Wolf Brewing, the Virginia brewery they founded together in 2011. | photo by Kate Thompson

In some cases, it’s actually the passion of the younger generation that brings a parent into the fold. After retiring from AOL as a vice president of product marketing, Mary Wolf was looking for her next adventure when her son Danny came to her with a proposal to start a brewery in Virginia’s Blue Ridge Mountains. “I studied to become a biologist,” Danny says. “But I didn’t love it. I wanted to be doing things, learning things every day. Brewing is science, it’s art, it’s engineering, and it really spoke to me.”

After training at the Siebel Institute in Chicago, he had difficulty finding work, but with the help of his mother, he established Wild Wolf Brewing in 2011. Today, Danny does all the brewing and equipment maintenance and repair while Mary runs the business side as the CEO and CFO. “She keeps us all in line,” Danny says.

And it isn’t always an easy working relationship. “There has certainly been some frustration,” notes Danny. “But at least I don’t have to worry about losing my job,” he laughs. “It’s a hundred times more rewarding, though, because we did it together. We’re not just business partners, we’re a team, and it makes it lots of fun.”

Mary concurs. “[It’s] definitely an evolving relationship and a hard transition at first. But now we’ve developed a really strong bond, and I have a respect and appreciation for the things he can do.” 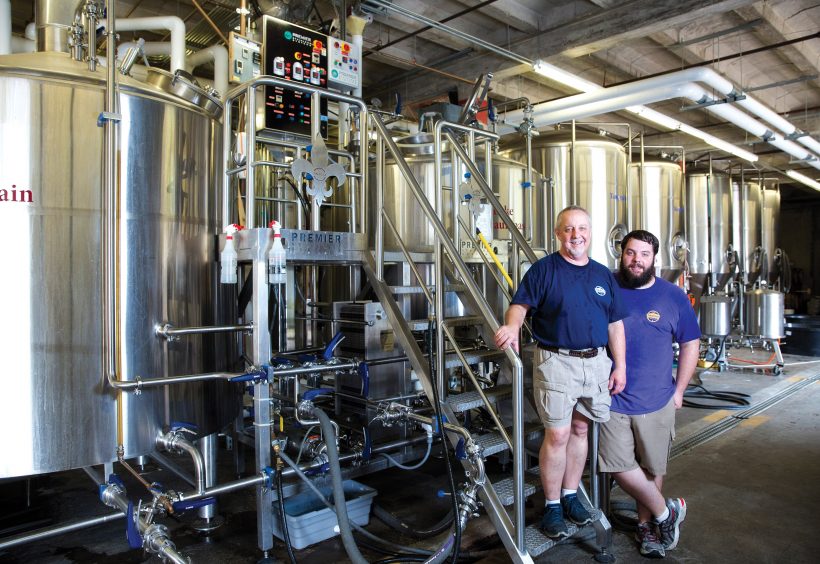 On the outskirts of Cajun country, Tom Daigrepont and his son Alex have been brewing side by side for decades. Much has changed between the time Tom began homebrewing and the present, when he works as brewmaster at Tin Roof Brewing in Baton Rouge, La., with his son assisting him as head brewer.

In 1997 Tom opened a brewery of his own, Bon Temps Brewing, with two partners. Although it closed three years later, Alex gained a lot of experience helping his dad out there as well—lending a hand with bottling or moving raw materials around the cellar. In January 2011, Tin Roof co-owners William McGehee and Charles Caldwell hired both Daigreponts, and they’ve been brewing together nearly every day since.

“I’m just an old traditional brewer. I want to brew nice clean ales and lagers according to traditional styles,” Tom says, referring to year-round beers like Perfect Tin Amber Ale. “Alex’s brewing style tends to be more creative and go outside the lines. Alex keeps me sharp and on my toes because he’ll ask questions that make me utilize my past experiences to think through the situation. This helps to create better procedures and ways to improve our beers. We both learn from it. It’s a symbiotic relationship that works well.”

This all begs a significant question: Do family-run breweries have a future in the current environment? With breweries proliferating at every turn, generational succession is a critical long-range consideration for some companies. Oscar Wong founded Highland Brewing 21 years ago after retiring from a career in nuclear engineering, so succession occupied his thoughts as the years went by. It was the brewery’s staff, however, that made him realize that he needed a plan and that his daughter would be an ideal match.

“I think she’s more suited to where the brewery is going than I am,” Oscar says. “I’m a starter, with the schmoozing. She’s more organized, thinks things through in a much more structured way than I would. My role is more of a mentor on the periphery. I’m the board chair, I kind of focus more on PR. I’m like a shill now,” he adds with a laugh.

Ashburn recalls going to a Craft Brewers Conference session on succession only to realize there was no discussion about intergenerational solutions. “I’ve talked to some other family business companies and they have had some struggle going from generation to generation,” Ashburn says. “Fortunately, dad’s so charismatic and I love his company. I get to work with him as a peer, which is such an amazing opportunity. We get to spend this time together now, in this different period in our lives. It’s really cool.” ■ 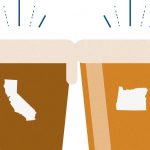 Previous: Voices for Change: Balancing the Needs of Diverse Members, Brewers Guilds Strive to be Inclusive and Effective 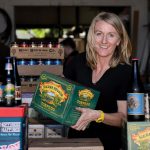