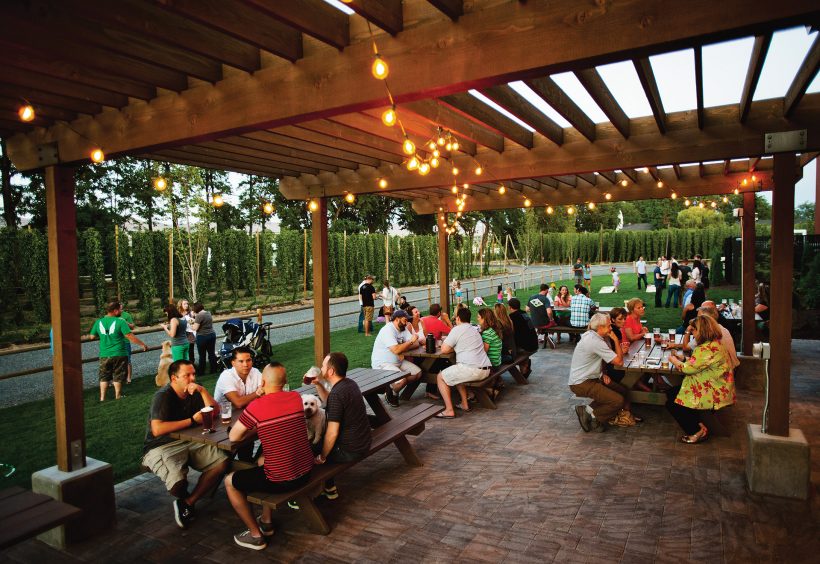 With climbing bines already firmly rooted in their DNA, a craft brewery seemed like the next logical step for a family of fourth generation hops farmers. Bale Breaker Brewing is the creation of siblings Meghann Quinn, Patrick Smith and Kevin Smith, whose family started growing hops in Washington’s Yakima Valley back in 1932. They founded Bale Breaker in 2013, with help from Kevin Quinn, Meghann’s husband.

The growth curve at Bale Breaker has been steep. Out of the gate, they were unable to keep up with demand for their beer, despite increases in production capacity. “We went with a 30-barrel brewhouse and 180 barrels of fermentation space,” says Meghann Quinn, president. “Before we opened, it was clear what we had wasn’t enough. We ordered two more 90-barrel tanks and we’ve since ordered six more. We still can’t keep up.”

The funny thing is, a lot of people told them they were nuts to open a brewery in the first place, despite the hops connection. “More than a few people told us no one drinks craft beer out here,” Patrick says. “We took that on as a challenge. One of the reasons we thought a brewery could succeed here is there’s no real competition. We felt like we had an opportunity to be the local beer here.”

The thrust of the business plan Patrick wrote as part of his MS in Agricultural Economics at Purdue University was that Bale Breaker would forgo the lucrative Seattle-area market to focus on building a strong following for its beers in rural eastern Washington. That strategy aligned with what Kevin Quinn had seen while selling restaurant franchises. Individual franchises were all over the map. The lack of a focused, core area led to problems. He thought Bale Breaker should be different.

“Looking at successful breweries, we realized that most owned their local markets,” Kevin Quinn says. “Distributors kept talking about the importance of a strong local presence, telling us our beer would do better remotely if it was well known here. That became our mission.”

It turns out the concept of local beer resonates almost everywhere these days. “Locals have supported us like crazy,” Meghann Quinn says. “We had a local connection with the farm, but most of the hops go away. The brewery has enabled us to form a connection with the end user, since a lot of our beer is consumed right here.”

Fatherly Advice, Family Intuition
After opening in April 2013, Bale Breaker sold more than half of its first year’s production in the taproom and the Yakima area. And it’s continued to do well there since. The beers, which were designed to showcase Yakima Valley hops, might have something to do with that.

Brewer Kevin Smith, with help from the rest of the team, developed recipes for a line of clean, hop-forward beers, and the two flagships, Field 41 Pale Ale and Topcutter IPA, feature vivid hop character. “Our initial focus on two beers worked out well,” Kevin Smith says. “It allowed us to dial in the consistencies of those beers, which helped us build a following. The last thing you want to do when you’re getting started is release beer that isn’t consistently good.”

Smith got hooked on brewing as he was finishing college at the University of Washington in Seattle. He became interested in starting a brewery about the time his siblings were thinking the same thing. But there was a catch. “Dad made it clear to all of us that we needed to try something else before we came back to the farm,” Kevin Smith recalls. “He told me to finish my degree (in geography) and get a job in a brewery.”

True to his father’s wishes, Kevin Smith graduated and got a job at Two Beers Brewing in Seattle. During the two years he worked there, he learned a lot and watched Two Beers experience dramatic growth. Patrick Smith and Meghann Quinn followed their dad’s directive, as well, in different industries.

“You might say we were drawn into craft beer,” says Patrick Smith, who runs Loftus Ranches with his father, Mike Smith. “We had great relationships with brewers because of the hops. But the more serious we got about opening a brewery and the more people we met and talked to, the more we felt like we had to be part of the industry.”

Canning for the Future
Despite, and in some sense because of, their status as hops growers, they set up Bale Breaker as a separate business with shared ownership. They didn’t want brewers to perceive Bale Breaker as a competitor for hops. “We wanted it to be clear that Loftus Ranches was not opening a brewery, but that members of the family were starting a separate business on the farm,” Meghann Quinn says. “In fact, we contract for hops just like everyone else. The only scenario where we have an advantage is with fresh hops.”

Working to develop a viable sales strategy, they collected input from brewers, distributors and industry friends. Ultimately, they decided six-packs of cans would be their main focus. That decision was driven by the reality of today’s marketplace. “There aren’t many permanent tap handles out there,” Kevin Quinn says. “We’ve done well in our core area. But no matter how fast a keg of our beer sells, most bars are going to rotate something else in. We concluded grocery store shelves are the new permanent handles.”

As a result, their priority has been getting cans of Field 41 and Topcutter into stores. And it’s worked. Draft sales were 52 percent of production their first year and roughly the same last year. In August 2015, sales of cans surpassed 50 percent of total volume. They expect that trend to continue. “If we had to shut down draft to fill cans, that’s what we’d do,” says Kevin Quinn. “They are the priority.”

Their distributor in the Seattle area endorses that thinking. “Bale Breaker’s off-premise strategy reflects their progressive approach to this ever-changing industry,” says Brandon Odom of Odom Distributing in Bellevue, Wash. “It is energizing to see a new brewery break from conventional wisdom and enjoy great success.”

On Tap
Field 41 Pale Ale: Dry-hopped with Simcoe and Ahtanum, Field 41 features the aroma and flavor of an IPA in a lighter package. Named for the hop field where Bale Breaker Brewing is located. 4.5% ABV
Topcutter IPA: A well-balanced, yet aggressive West Coast IPA that showcases Yakima Valley hops. Late additions of Simcoe, Citra, Ahtanum and Mosaic contribute to the complex citrus, fruity and floral character. 6.8% ABV
Bottomcutter IIPA: Light colored, but heavy in aroma and flavor, this Double IPA is double dry-hopped and brewed for a light, dry finish. A combination of Citra, Simcoe and Equinox hops provide flavor and aroma. 8.2% ABV
Raging Ditch Dry-Hopped Blonde: A thirst-quenching summer seasonal that’s light in color with bright tropical and citrus notes. Named for the maze of irrigation ditches that flow throughout the Yakima Valley. 5.3% ABV
Bubba’s Brew: A limited-release IPA brewed to raise money for Ales for ALS, Bubba features a blend of experimental hops that impart notes of tropical fruit. For each pint sold, $1 goes to ALS research. 6.0% ABV
High Camp Winter Warmer: Dry-hopped like its siblings, High Camp is a winter seasonal with a malty backbone and spicy chocolate notes that represents the dark side of Bale Breaker’s hop-forward style. 7.3% ABV ■ 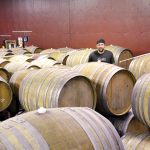 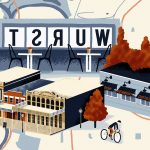