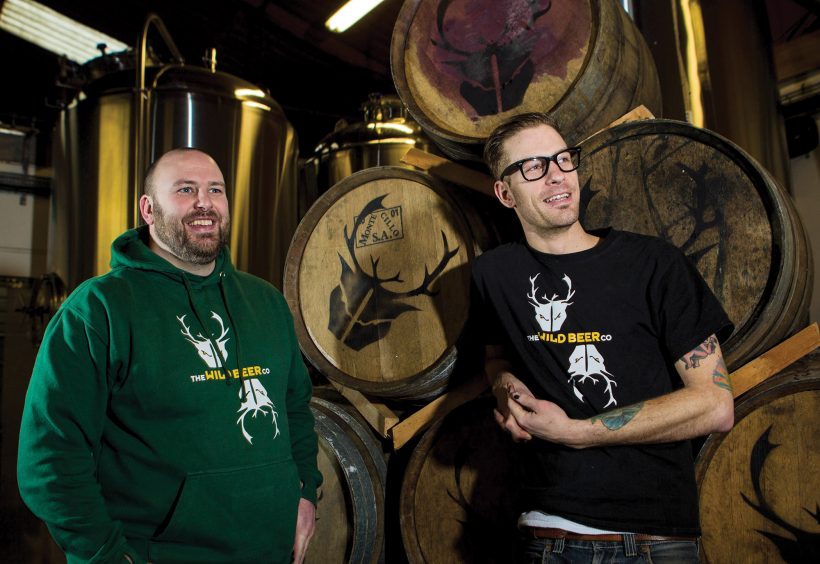 Surrounded by hundreds of wine and whisky casks packed on metal trestles, his voice muffled by bottles of Madness IPA rattling down the bottling line at a 1,900-per-hour clip, Andrew Cooper sizes up a massive vat of pressed grapes just delivered to Wild Beer Co., at no cost. They’re courtesy of a vineyard near the company’s rural facility amidst the rolling pastures of Somerset, England.

“We’re trying to capture the naturally occurring wild yeast strains from these grape skins to see if we can get positive flavor out of them,” says Cooper, who co-founded the brewery in 2012 with California native Brett Ellis.

Ellis, the head brewer, elaborates on plans for the grape husks. “They’re for a beer called Squashed Grape, which will be a rustic, sour Saison that has to be made using two different fermentations—an acid fermentation and a yeast fermentation—then blended and matured.”

This careful, considered way of doing things—harvesting native yeasts, implementing uncommon ingredients, blending, aging, experimenting—is what makes this remote operation one of the most forward-thinking craft breweries England has ever seen.

Two Guys in a Pub
The co-founders first crossed paths at Bristol Beer Factory in the UK, where Ellis was a brewer and Cooper, a certified beer sommelier, worked in business development. They hit it off, and a short time later the genesis of what would become Wild Beer Co. happened exactly where you might expect.

“We were at a pub and just started talking about how it seemed like the time was right for a real barrel-focused brewery,” says Ellis. “We asked ourselves what we thought the market was going to look like in five years, and the answers were drastically different from the current market.”

So in June 2012 the pair visited another Bristol brewery, Arbor Ales, to brew the first batch of Modus Operandi (called Modus Vivendi in the US), a sophisticated blend aged for at least three months and made from dark, Old Ales matured in red wine and bourbon barrels infused with wild Brettanomyces yeasts. Wild Beer Co. landed four months later at Lower Westcombe Farm, where they work along cheesemakers Westcombe Dairy at a site both producers have already outgrown.

It’s an adventure finding their farm, a property discreetly signposted by a chalked wooden plank reading: “Westcombe Beer & Cheese Shop Open.” The winding lane on which it’s located is wide enough for just one car at a time—take a wrong turn and you might end up stuck in a muddy cow pasture.

“There are a lot of open spaces and lush green hills,” says Ellis. “It’s easy to get lost around here, so I try to make beers in which one can also get lost, that draw you in, and that require or at times demand your attention, much like our local area does.”

Brewing Wild
The area indeed figures prominently into just about everything happening at the brewery, from what Cooper calls “hearty” strains of wild yeasts and bacteria, harvested from nearby farms and orchards, to beers brewed with local ingredients like Somerset apple juice and foraged fruits. Few UK breweries embrace their terroir quite like this, and none have yet staked a large part of the business on the type of bold styles, techniques and tastes in which Wild Beer specializes.

“We know we make beers that many people have never tasted,” says Cooper. “We’re not trying to make beers to anyone’s style guidelines or thoughts on what a beer should taste like—we’re making stuff that excites us. … We love ingredients, and we are inspired by flavor. We always start with flavor, then work backwards.”

A(nother) Leap of Faith
Last September, 70 miles up the road in the affluent spa town of Cheltenham, Wild Beer Co. embarked on another venture requiring something of a daredevil mentality. Wild Beer at Jessop House, set within a beautifully renovated, three-floor Georgian townhouse in the center of town, is the brewery’s first bar-restaurant. “It’s a big step for Cheltenham,” says Cooper. “It’s not like anything there before, not just with the beers, but the whole thing.”

The “whole thing” is a classy, grown-up pub and showcase for the Wild Beer ethos. There are, of course, draft beers flowing from 20 taps pressurized individually by a custom-built flux capacitor, the first of its kind in the UK. Clever decorative elements like hanging gramophones, fantastical animal illustrations by Bath-based artist Ben Rothery, and feature walls fashioned from Wild’s retired aging barrels are modern and refreshing. The biggest surprise, however, is a food program completely uncharacteristic of beer-centric venues like this.

Here the menus are more contemporary fine-dining than pub grub: think ox cheeks slow-braised in Modus Operandi, pan-roasted Ibérico pork loin, confit rabbit, even a cured and pickled fish board. “We’ve tried to reflect what we do in the brewery; there’s nothing quick on here,” says managing director Richard Kilpatrick. He also admits that Jessop House needs time to resonate with a local populace largely unfamiliar with the beer and food styles it champions.

“We’ve got a bit of a sell to do on the lovely folk of Cheltenham to get them to understand what we’re about, but we’re not going to sell ourselves down the river on anything we do,” Kilpatrick says. “We don’t compromise on quality—it’s all about the process of the ingredients, and the passion and culture of everything we do.”

A busy 2015 for Wild Beer Co.—adding a canning line, launching the restaurant, increasing production—continues with plans underway for a satellite brewery about three miles from the existing one. Once completed, Cooper plans to move the high-volume production of Wild’s non-barrel-aged beers to the new building, then to fill the freed-up space with more barrels.

“We’ve barely scraped the surface on the things we want to do,” he says. “What excites me most about the new brewery is what it’ll allow us to do here, when this facility becomes completely focused on wood, barrel aging and using different techniques and different wild yeast strains—that, to me, is the ultimate in making beer.”

On Tap
Somerset Wild: Up front sparkle and a delicate white-wine acidity and essence characterize one of Wild Beer’s signature brews. 5% ABV
Sourdough: Loosely based on a Berliner Weisse, this beer ferments and matures for four months in oak barrels with Brett and a 58-year-old sourdough yeast strain. 3.6% ABV
Modus Operandi: Imagine drinking from a bourbon cask filled with sparkling Merlot, sour cherries dipped in wood-aged liqueur, and a handful of cocoa. 7% ABV
Shnoodlepip: An intense mélange of dried fruit aromas and flavors commingle in this dangerously sessionable annual collaboration with NZ and UK breweries. 6.5% ABV
Evolver IPA: Fermented with nothing but Brett, this funky, mildly bitter IPA tastes of grapefruit sprinkled with graham cracker crumbs. 5.8% ABV
Ninkasi: Wild Beer produces this seductive Saison with locally sourced apple juice and makes it sing with a second Champagne yeast fermentation. 9% ABV ■ 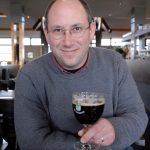 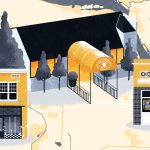