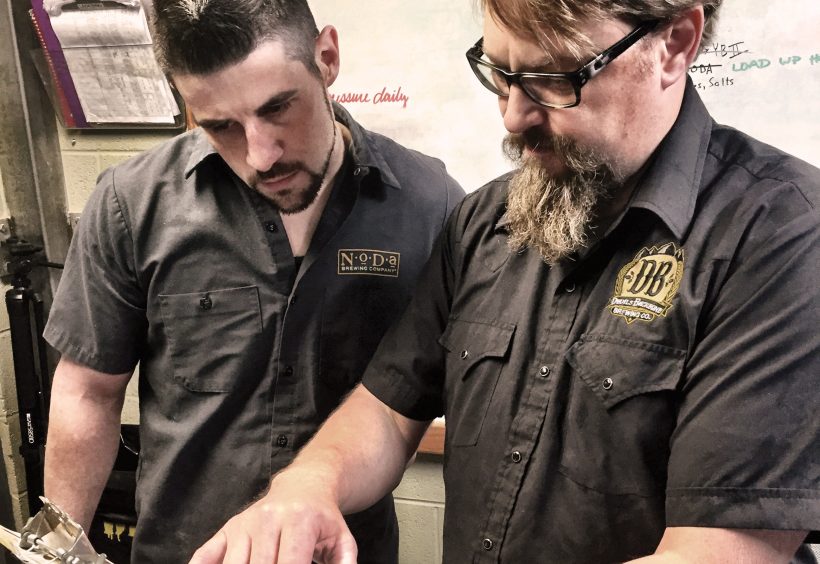 Go ahead, try to name a notable American brewery that hasn’t done a collaboration in the last few years. Not so easy, is it? Well, if you thought that was difficult, finding one that’s done more than Portland, Ore.’s Lompoc is going to be harder still.

The small brewpub chain—co-founded by Don Younger, the late publican who owned the legendary Horse Brass Pub, one of the nation’s first craft beer bars—has done 25 over the last two years, according to brewmaster Bryan Keilty. Every two or three weeks, Lompoc makes a brand new IPA with a different collaborator. It brews the recipe from the homebrew competition held by the Portland Timbers soccer team fan club. It was one of the three partners on the wildly successful 3-Way IPA canned by Fort George Brewery. When Lompoc closed its old brewhouse, it had 30 people crammed into the 530-square-foot space for the last batch, so many that they struggled to get the grain into the mash tun.

Along the way, it’s also had some adventures. One New Zealand brewer showed up for his collaboration with a broken wrist from a bad bike accident and had to be taken to the emergency room. A local beer enthusiast once weighed out the hops for a batch in kilograms. And on another occasion, Lompoc’s youngest brewer had to stand up to one of the most experienced and opinionated brewers in the city.

But it’s also had some big successes—in fact, Lompoc’s flagship IPA, Pamplemousse, started as a collaboration with local legend Fred Bowman, who co-founded Portland Brewing in 1985 and helped Keilty develop a signature blend of Meridian and Chinook hops for a one-off that blossomed into their best-seller.

After so many projects, Keilty has some firm ideas about what makes for a successful collaboration—above all, the need to be flexible. We asked Keilty for his specific tips and also talked to Jason Oliver, brewmaster at Virginia’s Devils Backbone, and Christopher Leonard, brewmaster and operations manager at Baltimore’s Heavy Seas. What follows are some basic rules of etiquette they say will make collaborations fun and successful.

1. Whoever owns the system and sells the beer, makes the rules.
Every brewer mentioned expectations—namely, the extent to which they vary in each collaboration and how they must be carefully managed.

“Some people show up in boots with safety glasses and gloves, ready to work,” says Keilty, “other people show up and they want to pour some beer and have some wings and it’s like a party. So we always have one person on the brewing staff who is in charge, and not drinking, and they guide the ship.”

Oliver has seen that dynamic at Devils Backbone, too, though he says collaborations with other brewers tend to be more predictable than when they’re working with local restaurant operators at their brewpub. The company just released its second Adventure Pack, which includes six different beers made with five different partners. They set some basic ground rules—like capping the ABV at 10.5 percent so the beer didn’t tie up tank space—then started brainstorming.

“What’s fascinating is the human element,” Oliver says. “Everyone communicates differently and comes in with different expectations. You learn that you have to state your point clearly.”

Whenever Heavy Seas participates in a collaboration—they’ve worked with up to seven other breweries at one time—Leonard says it’s easy to know who has the final cut. “We’ve done some where there was a lot of creative back and forth, but the brewery that’s making it has to sell it, so you’ve gotta let them make the final call. At the end of the day my sales guy has to go out and sell the beer.”

2. Prepare to be a student and a teacher.
We tend to talk about collaborations in monolithic terms—the use of the word in a brewing context really caught on in 2004, when Russian River and Avery blended two Belgian-style beers they’d independently named Salvation and called it Collaboration Not Litigation Ale—but the process is very different depending on the participants.

When Lompoc, Devils Backbone and Heavy Seas collaborate with other professional brewers, they tend to get specific about the technical details. They approach the occasion as students learning from peers. When they work with civilians, they tend to talk about big ideas and work up something possible. In these scenarios, they become teachers.

“With other brewers there’s a chance to really talk about technical brewing and learn about their process. We can discuss stuff like: how do you use the lab at your operation; who makes the final call on carbonation? All these little things that add up to determine the quality of your beer. It’s a learning experience for the brewers,” says Leonard.

At the Devils Backbone brewpub, the team has worked with local chefs and restaurant owners, which Oliver says is especially fun because they tend to be flavor driven as opposed to stylistically focused. “It’s a different dynamic, for sure,” he says. “Bringing something to life that they have some ideas about but that they don’t know how to make is a challenge, but it’s also fun.” Lompoc brewmaster Bryan Keilty and Sir Pamplemousse, a character from the label of Lompoc’s Pamplemousse IPA.

3. Show up on time.
Timeliness is important at any brewery, though the reasons differ. At many small brewpubs, like Lompoc, the brew crew tends to work early in the morning so they can be done with the loudest, hottest work before the lunch crowd shows up. At a production facility, like Devils Backbone, the week’s brewing schedule is carefully devised.

Keilty says 75 percent of collaborators tend to show up on time at Lompoc and then help with the mash-in process. There are exceptions though—like one Portland beer blogger who showed up an hour late, hung out for an hour, then asked to bum a ride downtown while Keilty’s assistant, Cecilia French, finished making his “collaboration” beer.

“I said ‘Don’t you want to hang out and help make your beer?’ and he says ‘It looks like she’s got it under control.’”

4. Understand that exotic ingredients are tough to source.
It’s nearly impossible to get just one batch of an exotic fruit or vegetable for a brewing project. Anyone who’s tried to make that periwinkle and rambutan Cream Ale at a commercial scale knows this, but it’s not something people learn until they try—often as part of a far-flung collaboration.

“You start searching, and you see commodity ingredients pop up, and small home quantities pop up,” says Oliver. “You have to either buy a whole shipping container, which is thousands of pounds, or pay way too much for a small amount. That middle ground, beer-manufacturing amount is hard to find.”

Keilty has had the same problem. Inevitably, collaborators come up with delicious ideas that couldn’t be sold for less than $15 per pint. It’s his job to do the research, then gently steer them to something more workable. “The main rule with a collaboration is always that you have to be flexible,” he says.

Even when it’s possible to get the ingredient, lots of lead time is often necessary. Heavy Seas recently produced a coffee beer collaboration with a local roaster. As Leonard remembers, it took the roaster three months to squirrel away enough roasted beans to make it work. “That was quite a process,” he says. “With these beers it’s a whole other world for us to explore. Like, we might say, Where do you get 1,500 pounds of mango peel?”

5. Some hop varieties can be tough to get, too.
Breweries lock in their annual hop supply with contracts that are fulfilled in the year following the fall harvest. In other words, a homebrewer who has a great recipe for a Simcoe and Citra Double IPA might have to settle for Chinook.

“There are hops available to homebrewers that would be prohibitively expensive for us,” says Keilty. “Like, they’re $25 per pound for a homebrewer but we need 15 pounds, and we normally pay $8 to $10 for commercial quantities. I’m sure the bigger breweries pay even less. But we can’t really do $25 per pound.”

When it’s two pros working together, sometimes there’s a way to work a trade that benefits everyone, since breweries get to diversify their offerings. In the case of Devils Backbone, the session IPL made with North Carolina’s NoDa for the Adventure Pack uses Simcoe that Oliver swapped for Azacca. “Usually I try to trade by weight, not by price,” Oliver says. “I’m looking at it as a brewer and not an accountant.”

6. Embrace the marketing potential.
In some ways, collaborations are the beer world’s answer to a traditional three-band bill in the rock world. “I’ve been turned on to so many bands because I saw them open for a band I went to go see,” says Oliver. “So we think of it like that, as a way to get our name out there to new people. Both names are going on [the product], so you want it to show well—it doesn’t do you any good if you have your name on the beer that tastes like shit.”

Heavy Seas has typically worked with people it knows well—the brand’s management are seasoned members of the beer world—but now it’s trying to branch out.

For SAVOR, the Brewers Association’s beer and food festival in Washington DC, Heavy Seas teamed up with Yards Brewing of Philadelphia to make Philtimore, an English-style Pale Ale. The project was inspired by the fact that both breweries are known for cask ales, meaning they share a niche and, possibly, customers. “We’re trying to think more strategically with it being a beneficial collaboration from a growth standpoint,” says Leonard. The crew behind Stoop Sitter, a Heavy Seas collaboration for Baltimore Beer Week.

7. Don’t miss the shot.
The best thing about a collaboration is that by the very nature of the project it gives brewers a reason to break out of the box, says Oliver. “It’s an occasion to stretch your boundaries a little bit, and an excuse to do something you’ve wanted to do that you don’t really have a place for,” he says. “We’ve certainly been inspired to brew different styles of beer by doing them jointly in collaborations first and learning from them.”

In November 2013, for example, Devils Backbone collaborated with Blue Mountain Brewery on a Belgian-inspired Quad. “We both brewed it at our respective breweries originally and liked it so much that we both have brewed it since,” Oliver says. “So far I have participated in brewing a session strength IPL in two collaborations including our current collaborative 12-pack with NoDa. That inspired us to brew yet another one, honing and expanding upon the style. I learn from each collaboration we as a company participate in.”

And like any special occasion, it’s a good chance for a photo. Lompoc is flexible about pretty much everything else, but the shoot is always scheduled. “As a process, it’s not very photogenic,” says Keilty. “We’ll have the people dump grain in at the beginning and maybe there are some shots there, but it’s hard to get a good one. So we always get a group photo after grain out, with everyone standing in front of the tanks.” ■ 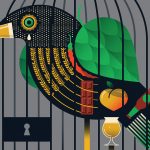 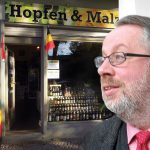