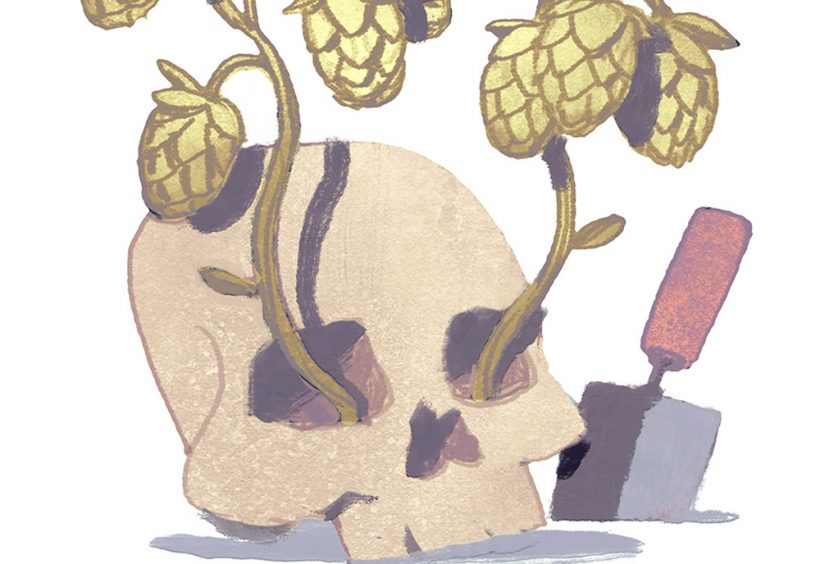 Until very recently, the first known mention of Goldings hops was in 1798, when an agricultural writer called William Marshall, talking about the hops grown in West Kent, said: “The ‘Golding’ has, of late years, been in high repute. It … was raised by a man still living (1790), Mr Golding, of the Malling quarter of the district; who observing, in his grounds, a hill of extraordinary quality and productiveness, marked it, propagated it, and furnished his neighbours with cuttings, from its produce.”

Goldings and Fuggles are Britain’s best known hop varieties, famous both for flavoring many of that country’s finest ales, and for being the parents or grandparents of some of the hops that craft brewers currently favor, including Chinook and Citra (Goldings), Cascade and Willamette (Fuggles) and Centennial (both Fuggles and Goldings).

However, the origins of these two top hops are shrouded in the sort of fog that, in winter, often fills the valleys of their original home: the county of Kent, in the southeast corner of England, where most of Britain’s hops are still grown today.

Each is named after the man who supposedly first developed the new hop into a commercial variety, just ten miles apart geographically, though a century apart in time. But nobody knows exactly who the “Mr. Golding” was who gained the credit for spotting a hop of “extraordinary quality” on his property, or even where precisely he lived. Nor is it known which of several men called Richard Fuggle was the one who developed a seedling found growing in a carpenter’s flower garden into what was, at one time, the most widely cultivated hop variety in England.

With the increasing number of historic newspapers now scanned and searchable on the internet, however, evidence has turned up that pushes the origins of Mr. Golding’s hop back to at least the mid-1750s. In August 1774, the Kentish Gazette newspaper carried an advertisement for 6 acres of hop-grounds in Frindsbury, a small village 8 miles northeast of the Mallings. Three acres of this hop-ground had been planted with Goldings “about fourteen years,” or, in other words, in approximately 1760.

But 3 acres of hops requires around 11,000 hop plants, and while a very good hop plant might produce upwards of 100 rhizomes or root cuttings suitable for planting the following year, each newly planted cutting will need to grow for a couple of years before it can supply cuttings itself. It would have been at least five years after Mr. Golding first found his “extraordinary” hop before he had enough cuttings for his own needs to be able to give any away to friends, family and neighbors. Even if the hops planted in the Frindsbury hop-grounds were part of the very first wave of “neighbor” plantings, that means the Goldings hop could not have been first spotted any later than about 1755 (meaning, incidentally, that it has just passed its 260th anniversary).

Unfortunately, this does not put us any closer to discovering who the perceptive Mr. Golding was who cultivated the hop that now bears his name. The “Malling quarter” where, according to William Marshall, he still lived some 35 years after finding his eponymous hop, covers the twin towns of East and West Malling. Members of the Golding family lived, and farmed, all around that part of Kent from at least the early 17th century, and many were involved in the hop trade.

In the village of Plaxtol, near Sevenoaks, Kent, they have no doubts about the identity of the discoverer: even in 1870 there had been Goldings farming for “several generations,” and villagers name William Golding as the farmer who found the hop. In fact, one of Plaxtol’s pubs has been called the Golding Hop since at least the 1890s, and the village is also home to Golding Hop Farm. But the big problem with Plaxtol’s claim to be the place where Golding hops first grew is that the village isn’t in “the Malling quarter,” where Marshall said Mr. Golding came from, it’s 6 or so miles away.

A branch of the family that fits much better are the Goldings of Ditton Court, Ditton, just north of East Malling. Thomas Golding of nearby Ryarsh acquired Ditton Court in 1735, and left it when he died in 1769 to his son John Golding, who was born around 1727. John Golding would have been 28 or so in 1755, around the time when the now namesake hop is likely to have been found, and he died in November 1807, aged 80, making him 63 in 1790, when Marshall wrote about the discovery. He would have known all the neighboring hop growers, too, well enough to exchange information—and cuttings—with them. Every year they met at the August market in West Malling to bet on the size of that year’s hop harvest.

By 1848, four decades after John Golding senior’s death, the Golding hop was being described as “undoubtedly the finest, richest and most valuable of any [hop] grown.” It was particularly popular with brewers of beers for long keeping, such as India Pale Ales, which in the 19th century were expected to last in cask for a year or more. And yet, strangely, if it was John Golding who found the first Golding hop, nobody seems to have ever specifically said so.

Meanwhile, the history of the Fuggle hop has always been, on the surface, much more specific. In 1902 an agricultural academic called John Percival wrote: “The original plant was a casual seedling which appeared in the flower-garden of Mr George Stace, of Horsmonden, Kent. The seed from which the plant arose was shaken out along with crumbs from the hop-picking dinner basket used by Mrs Stace, the seedling being noticed about the year 1861. The sets were afterwards introduced to the public by Mr Richard Fuggle, of Brenchley, about the year 1875.”

It all sounds very cut and dry. But later research found two big holes in this story. No trace could be found of a Mr. Stace living in Horsmonden, a village some 10 miles south of West Malling. This turned out to be because Percival got the name wrong: it was actually George Stace Moore, a carpenter. In 1861 he was 55 and his wife, from whose dinner basket that fateful seed fell, was 42-year-old Sarah Moore.

The other problem is that there were three people named Richard Fuggle in the district at the time, two—father and son—living at a place called Old Hay, 2 miles north of Horsmonden, and a third, their nephew and cousin respectively, who did indeed live in Brenchley, a mile and a half from Horsmonden, but who was only 13 in 1861, when the Fuggle hop was “first noticed.” Plus, he emigrated to Ontario at age 23 or so, making it essentially impossible for him to “introduce” the Fuggles hop to the public “about 1875.”

It seems, however, that Percival got this fact wrong, too, and the Fuggles hop was introduced rather earlier than 1875. A newspaper report from February that year called the “Fuggle’s Golding” (sic) a “recently introduced early sort” that was one of the noted types of “great croppers” and “in great demand.” For the “Fuggle’s Golding” to be “noted” as a great cropper by early 1875, it surely must have been cultivated for a few years before that, at least. Indeed, if it takes five years to propagate a single new hop up to commercial levels, we should expect the plant found in George Stace Moore’s flower garden to have been ready for a wider market by around 1866 or 1867. Richard Fuggle of Brenchley would then have been 18, old enough to promote the hop bearing his name, and with just enough time before he left for Canada.

And then there is another possibility. The Fuggles were all relatives of another hop-growing family in the Horsmonden area, the Manwarings. One, Thomas Manwaring, another uncle to Richard Fuggle of Brenchley, lived even closer to the Moores’ cottage than Richard Fuggle did. In 1869 it was reported that Manwaring had been “raising a new sort of hops called Cedar Goldings, which are very superior, and in the season he will have some sets for sale.” Curiously, these “Cedar Goldings” never seem to have been heard of again. Did Manwaring rename them “Fuggle’s Golding” to commemorate his nephew when the young man left for Ontario two or three years later?

This is probably taking speculation too far. But the “Fuggle’s Golding” proved indeed to be “very superior,” and very popular with British brewers, so that by 1949 Fuggles hops made up 78 percent of the English hop harvest. (It took a decade or more before growers began calling it simply Fuggles, and the version of Fuggles grown in Slovenia is still called Styrian Goldings, referencing a historical region that encompasses parts of modern Slovenia and Austria.) Sadly, it is particularly susceptible to the fungal infection Verticillium wilt, and is down to only a tiny percentage of English hop acreage today. Fortunately, its less wilt-susceptible relatives thrive on in the Pacific Northwest. ■ 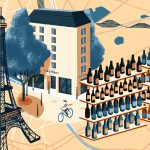 Previous: Where to Drink in Paris, France