Grin and Beer It: Watering Holes Cater to Hikers Along the Appalachian Trail 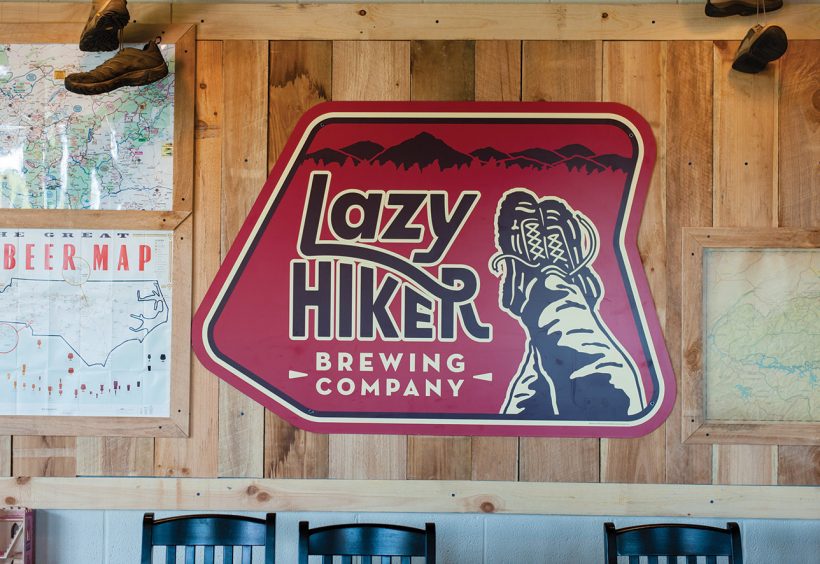 An Appalachian Trail thru-hiker undergoes myriad sacrifices on the 2,189-mile pilgrimage of purpose that passes through 14 states from Georgia to Maine. These hikers choose to forego daily showers and satisfying meals while enduring relentless exhaustion and depressing bouts of homesickness. But for beer enthusiasts, there is some good news: Our drink of choice doesn’t need to be on our list of sacrifices.

The town of Franklin, N.C., welcomes hikers. As a matter of fact, according to Lazy Hiker Brewing Company’s Noah McIntee, hikers are, “part of the DNA that makes us what we are.” Named in part to honor of the day of indolence tired backpackers occasionally enjoy, this year-old brewery is open seven days a week and prides itself on four core beers and four rotating seasonals. Whether you prefer a hoppy Slack Pack IPA or a malty Wesser Evil Porter, Lazy Hiker’s comfortable patio is an easy 10-mile hitchhike from the trailhead at Winding Stair Gap. Hungry? There’s also a food truck on site to satisfy your munchies.

Just two blocks away is Outdoor 76, which offers hiker essentials like gear, free mail drops, free internet and, yes, beer. Inside the extensive outdoor gear shop you’ll find Rock House Lodge. With 18 eclectic taps to choose from, this bar has one of the most diverse selections west of Asheville. “We have worked hard to provide the best quality products for our outdoor store,” says co-owner Cory McCall. “That philosophy has transitioned right over into our taproom where we only serve quality craft beer from the best breweries. Our technical aptitude for gear and beer has set us apart from others in the industry.” 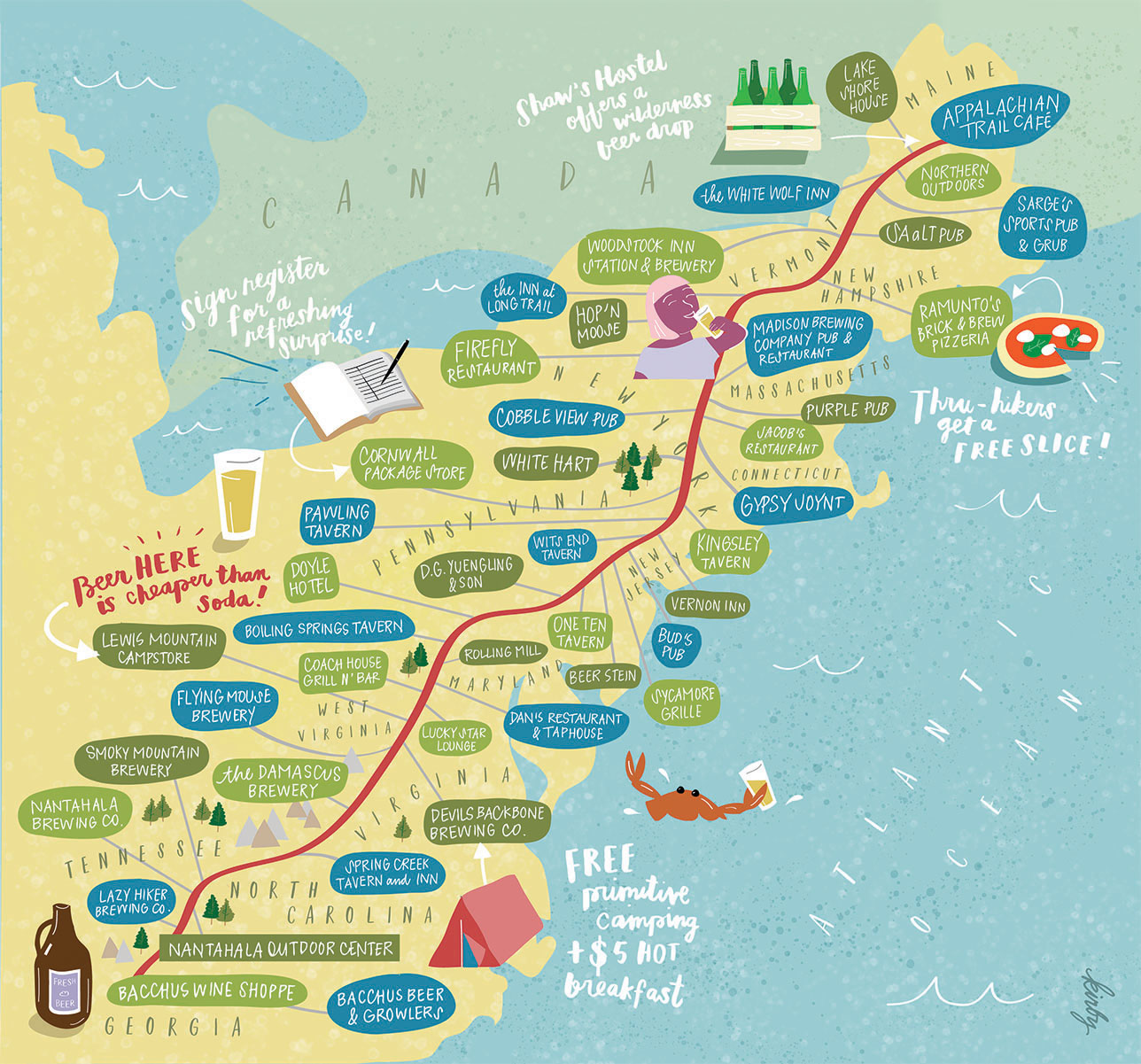 Further north, trekking beer buffs will reach the Reeds Gap trailhead in Virginia, where a detour to Devils Backbone Brewing Company is a must. Recognized by the Brewers Association as Mid-Sized Brewing Company of the Year in 2014, this brewery offers much more than a selection of award-winning beer. An outdoor bar with mountain views and an enormous patio that includes an oversized fire pit and an outdoor restaurant, The Oak Grill, provides weary hikers with a place to relax for a few hours.

The brewery is also in the process of obtaining a permit to allow free primitive camping on its expansive lawn for Appalachian Trail thru-hikers. Plus, the brewery distinguishes itself by offering a hot breakfast to thru-hikers for a mere $5. A ride back to the trailhead is offered too, for no additional charge. It’s nearly 300 miles to the next popular watering hole in Duncannon, Penn., so make this well-deserved stopping point a priority. Hikers are always welcome at Devils Backbone, regardless of their aroma.

As the A.T.’s white blazes continue toward Maine, Hop’n Moose Brewing Company in Rutland, Vt., is another place worth a layover. From the Sherburne Pass/Long Trail Crossing at US Route 4, it’s a 24-minute bus ride into town. Three doors down from The Yellow Deli, a popular hiker hostel, Hop’n Moose satisfies hungry, beer-loving sojourners regardless of their preferred style of ale or lager. Every color of the beer rainbow is available on the 14 taps here. Anything from a Red Ale aged in whiskey barrels to a hazy Double IPA and a Brown Ale made with honey are waiting to quench the thirst of tired visitors.

According to Dale Patterson, the establishment’s owner and brewer, “our hamburgers are produced using locally sourced cattle that feeds on the spent grains from the brewing process.” That’s not all Hop’n Moose has to offer on their menu, either. Poutine with local cheese curds, wood-fired pizzas and beer-infused chocolates from the Vermont Truffle Factory all help quiet grumbling stomachs.

The country’s first National Scenic Trail winds through eight national forests and two national parks and is the longest hiking-only trail in the world. Near the end of this epic footpath, a night or two in West Forks, Maine, at Northern Outdoors, home of the Kennebec River Brewery, allows distance hikers to enjoy some much-needed down time with their “trail family.” Celebrating its 40th anniversary this year, Northern Outdoors goes beyond meeting the basic needs of food and beer, and its president, Russell Walters, says the establishment has “catered to hikers since day one.”

Typically showcasing six of the eight draft beers made on site, Kennebec Brewery doesn’t produce a large volume of liquid, but it offers a variety that ranges from a fruity blueberry ale to a German-style Schwarzbier. Savor a pint or three while soaking in the hot tub, floating in the swimming pool, checking email using the free Wi-Fi or attempting to win a friendly game of cornhole. For a bigger challenge (appropriately named “The Exterminator”), try to inhale a 4-pound burger and a pound of fries in 30 minutes. If successful, you’ll get the $30 meal free of charge.

Ultimately, whether your trail beer is found at a pub in the Smoky Mountains, a brewery in New England, or in a “trail magic” cooler stowed in the woods by a kind, empathetic soul, beer is part of Appalachian Trail culture. And no single can tastes better than the one you lugged for miles up a mountain summit to enjoy while watching a magical sunset. ■ 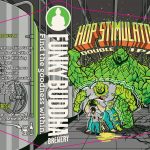 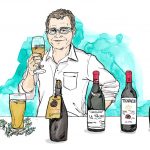