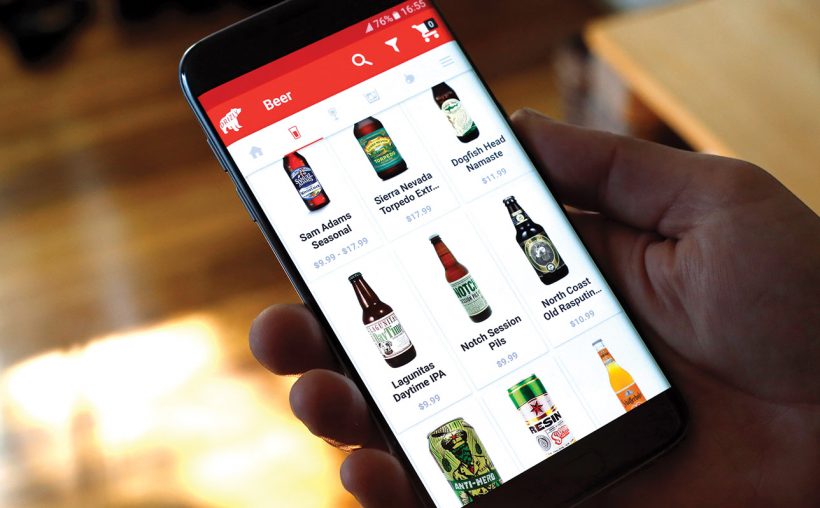 It was a Friday afternoon when Matt McKenna found himself home in Boston with his three daughters, all under 5 years old and napping. With a quiet house, he figured he might have a moment to enjoy a beer, but when he checked the fridge, only one remained. Not wanting to leave it completely bare, he pulled out his phone. A few swipes and pokes later, he was set.

Drizly to the rescue.

About a half-hour after that, a driver pulled up to his curb with a six-pack of Firestone Walker Union Jack and a 12-pack each of Lagunitas IPA and Miller High Life. The service added a small $5 delivery fee to his bill but no cash was exchanged and his daughters continued sleeping, undisturbed. And just like that, he restocked the fridge thanks to one of the beer industry’s growing new services: home delivery.

“I live less than 3 miles from a liquor store, the prices are outstanding and they’ve got a great selection of craft beer, but I can’t always get there with three kids,” says McKenna, who uses Drizly, an on-demand alcohol home-delivery service, about once a month. “Plus, if my wife and I are having a party and running low on beer, I can order discreetly and you become the star of the show when you walk out and a minute later you have more beer.”

In major metro areas across the country, more and more beer lovers are benefiting from the luxury of having brews dropped off at their door—even freshly filled growlers. Since Amazon changed the home goods delivery game years ago, expectations have expanded beyond books, clothes and non-perishable items. Today companies like FreshDirect and Peapod deliver groceries to households across the country while Blue Apron and Hello Fresh ship ready-to-make meals for couples and families. It’s worth noting that this shift in beer purchasing options has arrived at a time when 69 percent of internet-using adults shop online at least once a month, according to a 2015 report from market research firm Mintel.

Consumer expectations for on-demand shopping may have been the initial catalyst, but with the rise of mobile commerce becoming an everyday activity, it’s no wonder drinkers want booze to follow suit, says Benn Konsynski, the George S. Craft Distinguished University Professor of Information Systems & Operations Management at Emory University’s Goizueta Business School. If people once had bottles of milk dropped off at the front door, why not a cold case of beer?

“The models of delivery or distribution aren’t new, but the economics of it have changed,” notes Konsynski. “Technology has allowed us to move away from retail outlets to a new means that allows spontaneous on-demand distribution. One of the best sandboxes of disruption is local and regional retailing.”

And for an industry increasingly focused on the idea of “local,” one company is changing how drinkers can get fresh beer straight from its source. In 2011 and 2012, while living in Boston, Elvis Lieban made weekly trips to Harpoon Brewery, walking several blocks from his office to fill up a growler or two. When he moved to Oakland, Calif., in 2013 though, he found it less convenient to drive 30 minutes each way to his nearest brewery to fill a bottle or two directly from the tap.

So in January, he signed up for Hopsy, a California-based beer delivery service that collects orders online and via a mobile app and drops off growlers from a dozen Bay Area breweries. Partner breweries fill 32-ounce “growlettes” with a counter-pressure CO2 filler and store them below 40 degrees before a Hopsy employee picks up the bottles, keeping them at the same temperature. Deliveries bring growlettes to each customer with refrigerated equipment. Four or more growlettes are free; otherwise the delivery charge is $4.99.

To some extent, that convenience factor has changed Lieban’s behavior. He’s always preferred draft beer—“it’s more fresh and delicious that way,” he says—so ordering Prescription Pale Ale from Magnolia Gastropub and Brewery or a beer from an unfamiliar brewery like Cleophus Quealy Beer Co. has replaced a weekly trip to a bottle shop. It hasn’t impacted his interest in visiting bars, however, to make sure he gets beer fresh from the tap.

“There are more small, local breweries in the Bay Area than ever before and most don’t have bottle distribution,” Lieban explains. “If I want to drink them at home, I have to get a growler, and Hopsy is making that possible.”

Hopsy’s participating breweries love it, too. Derek Drennan, a partner with Sonoma Springs Brewing Co., says the brewery started filling 40 to 50 orders a week when it joined Hopsy in February. That number now hovers around 75, a boost to normal weekly sales that can fluctuate from about 20 to just over 100, Drennan says. Selling through the delivery service means beer is getting to a new set of drinkers an hour away in San Jose, the East Bay and San Francisco, which Drennan admits would be hard for the small, self-distributing, Sonoma-based brewery to handle on its own.

“We don’t have intentions of taking over the world, but in order to grow and become regionally recognized, you have to be willing to try new things to bring fresh beer to the masses,” he says. “[Hopsy has] an email list with thousands of people and growing, which means every week those clients are getting an email that highlights our beer.”

The rise of these tech-driven beer businesses may be a boon to customers and breweries, but even as services like Hopsy change shopping habits, some brick and mortar stores insist that they aren’t feeling threatened—yet.

At Urban Grape in Boston’s South End neighborhood, co-owner Hadley Douglas now shares the marketplace with delivery services like DrinkIn, Buttery and Drizly, which currently boasts the largest retail delivery network in the country. She doesn’t view them as competition though, and her beer sales haven’t been hurt because, she notes, Urban Grape offers a wide, rotating and curated selection of about 350 different bottles, and in-person “concierge” customer service. Urban Grape also offers “progressive shelving,” which sorts beers by style-focused flavor—like hop, malt or yeast—and then arranged by the increasing level of expression of each kind of flavor.

“We’re not talking about getting a case of Michelob delivered to you,” Douglas says. “With so many new players on the craft beer scene, customers can trust that we’ve vetted what we put on our shelves and it’s the truest and best representation of that product. There can be a thrill to searching in our store.”

Another advantage: Urban Grape offers delivery, too, although any order under $150 requires an additional $10 fee. Drizly meanwhile, is willing to drop off orders starting at $20, while Hopsy’s minimum order is a single 32-ounce growler.

In Austin, Texas, Jody Reyes has developed an advantage for WhichCraft Beer Store. Not only does he have employees brush up on beer knowledge by taking a proprietary test based off Cicerone Certification Program exams, but he also had IBM create software for his store that uses data about a customer’s flavor preferences collected during free, in-store tastings to generate an individual “fingerprint” for each drinker. That allows Reyes and his staff to recommend specific beers for sample or purchase later on.

“As a retail shop owner, I can’t always expect our rich customer experience to continue as an advantage,” says Reyes, who opened WhichCraft in 2014. “I love purchasing things online and I know how good it is to have that convenience, but there’s still nothing like going to a store and seeing and sampling the beer yourself.”

It just so happens, though, that convenience and expertise aren’t mutually exclusive when it comes to one rapidly expanding beer delivery service. Brewpublik, which is headquartered in Charlotte, N.C., and has set up markets in San Francisco, Raleigh-Durham, N.C., and Charleston, S.C., in 18 months, is trying to bridge that gap.

Marketing the company as “Netflix for beer,” co-founder Zach Jamison notes there are several ways that the business he started with Charlie Mulligan and Samantha August is not only different from other on-demand beer services, but also replaces the in-store shopping experience with a fully curated selection of beer. It’s all part of the company’s “beergorithm,” which makes selections tailored to each customer from a range of thousands.

When signing up for a Brewpublik membership, a customer utilizes the database of popular social media app Untappd to enter beers they enjoy, thus creating a taste profile. Based on individual profiles, Brewpublik then matches up preferences within its “beergorithm” to send subscribers an assortment of beer, ranging from a six-pack sampler to a case of 24 containing six each of four tailored beers. For an additional fee, there’s even a “premium” level that allows customers to receive limited releases like Bell’s HopSlam Ale or Founders KBS.

In this way, Jamison believes Brewpublik is doing the hard work for beer lovers, who retain the advantage of constantly trying new beers without needing to spend time walking aisles.

“Giving time back has become a huge value to the customer, because people feel their time is more at a premium,” says Jamison, who acts as Brewpublik’s “chief beer officer.” “Whether it’s beer or food, delivery offers the chance to be more efficient, especially as technology catches up to our regular habits.”

The company is planning to expand into 10 markets by the end of 2016, adding cities like Austin, Texas and Los Angeles. Jamison said he hopes to eventually offer beers across West Coast and East Coast markets, so customers in California could get beers from North Carolina and vice versa.

Drizly’s expansion has also been fast. In three years of operation, the company has launched in 21 markets (including Canada) and plans to add 10 more by the end of 2016. Nick Rellas, Drizly’s co-founder and chief executive officer, says that with smartphones increasingly at the center of people’s lives, technology doesn’t only factor into how decisions are made, but when they’re made, too.

“If you can have Amazon leave a kayak on your front porch or request a car with the push of a button, why not alcohol?” he asks. To entrepreneurs like Rellas and Jamison, catering to a customer’s whim and taking the effort out of their hands seemed like an obvious move for the industry.

With many of its customers falling into the Millennial generation, (Drizly’s average user is between 28 and 34), Rellas says Drizly and its peers succeed because e-commerce is ingrained into everyday behavior. As on-demand delivery continues to feel normal for aspects of life from transportation to food delivery, Rellas believes there’s no reason why beer delivery can’t expand, too.

“In many ways, our culture has doubled down on technology as a great accelerator,” Rellas says. “Now it’s matching that up with consumer tastes and expectation as it becomes part of the status quo for the [beverage] industry.”

Delivery services may meet resistance as customers consider changing their beer-buying behaviors, but as Matt McKenna can attest, he’s happy to embrace the change if it means restocking the fridge without disturbing napping kids, making for a happy household all around.

“If I’m waiting 15 to 20 minutes for delivery, it might take me just as long to get the kids, hop in the car and go down the street,” McKenna says. “I’ll pay a little extra for that convenience factor.” ■ 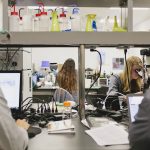 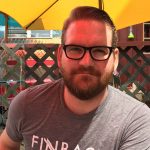