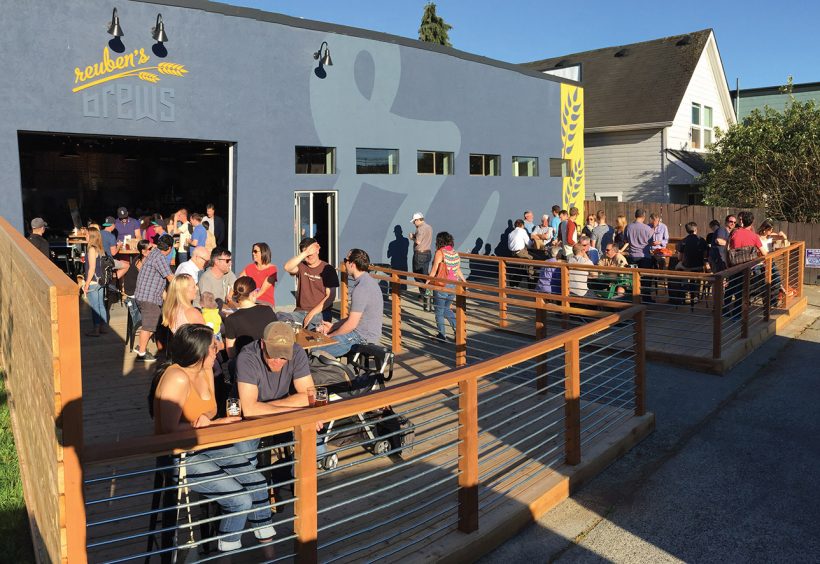 We’ve all heard the old adage about teaching a man to fish. With a slight twist, it often rings true in the beer industry, too: Buy a man a beer and he’ll drink for an hour, but give him a homebrew kit and he’ll quit his day job and open a brewery. Something like that.

When Grace Kim Robbings bought her husband, Adam, a homebrew kit just a few weeks after their first child was born, she never imagined that the new hobby would turn into an obsession and completely alter the course of the young family’s life. In just a couple of years, her husband matriculated from homebrewing newbie to brewmaster and co-owner of one of Seattle’s most ballyhooed breweries: Reuben’s Brews, which was named after the couple’s by-then-toddling son, Reuben.

“Looking back, I suppose I should have seen the warning signs,” says Grace Robbings. “Adam is a bit of a foodie, has always enjoyed beer, and was getting to the state where he would sample a beer and think about ways he would modify it to suit his tastes. He got hooked on brewing immediately, and he started absorbing everything he possibly could about it—from books, friends, forums, clubs, brew school, and lots of market research.”

“Bloody Good” Beer
It turns out that Adam Robbings has a knack for brewing—perhaps a genealogical phenomenon related to his British roots. The 42-year-old native Londoner moved to the US in 2004 and started homebrewing in 2010, which is when his Roasted Rye IPA won first place in the People’s Choice Awards at the PNA Winter Beer Taste, one of Seattle’s longest-running annual beer events.

In 2011, Adam enrolled in the Intensive Brewing Science program at the University of California, Davis to learn about commercial brewing. The next year, he opened Reuben’s Brews in Seattle’s Ballard neighborhood.

Reuben’s Brews won five medals at the inaugural Washington Beer Awards in 2013 and immediately grabbed the attention of local beer lovers. In just four years the brewery has earned over 100 medals, including a gold medal for its Gose and a bronze medal for its Dry Stout at the 2015 Great American Beer Festival, and more recently, another gold medal at the 2016 World Beer Cup. That’s just the beginning of the medal count; during Reuben’s Brews’ four-year reign as Seattle’s beer champion, none of Washington State’s 300-plus breweries has amassed more hardware from national and international beer competitions.

“Adam is a bit reserved, but he’s also incredibly tenacious,” explains Grace. “He takes the approach that good isn’t good enough, so he strives for bloody good beer in every single glass. He seeks out beer competitions not to up the medal count, but as a way to confirm that he’s doing the right things for the beer.” 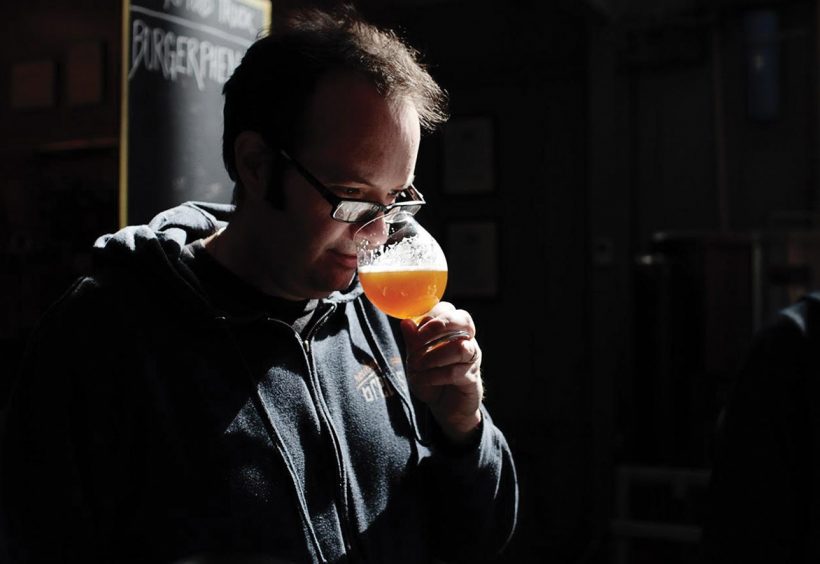 Fan Favorites
The original brewery was a small 7-barrel system in a tiny space the couple converted into a taproom on the weekends. In May 2015, a few months shy of its third anniversary, Reuben’s Brews opened a new, larger brewery and taproom just two blocks from the original spot, using the old location as a small-batch facility. In 2015 the brewery produced 2,800 barrels and is on target to produce 5,500 barrels this year, which is currently its maximum annual capacity.

A larger brewing system now feeds the thirsty crowds that pack the taproom. It also helps Reuben’s Brews to keep pace with wholesale demand for its beer, which it had previously managed to self-distribute out of the trunk of Adam’s car. Once local distributors caught wind of expansion plans they began to court the young brewery.

Larry Rock, a former Seattle brewer who now works for Click Distributing, saw early promise. “I actually got to taste samples of Adam’s beers in 2012 just before they opened the brewery. I was blown away and immediately saw great things happening with his beer,” he says. “I enjoyed courting Adam and Grace—it was an excuse to drink their beer, of course. Even before they were part of our portfolio I was telling people that they’re one of the best breweries in the country. And I’d say that even if they’d decided to sign with someone else. Up and down the lineup, everything they brew is outstanding.”

Ballard and Beyond
Case in point: When a brewery creates a beer brewed exclusively for a local restaurant or pub, the result can be unremarkable, designed to appeal to the widest audience and the lowest common denominator. Not so with Reuben’s Brews. Hop Tropic IPA, which the brewery created for Washington pizza chain Zeek’s Pizza, won a silver medal at the 2015 North American Beer Awards.

“Triumvirate IPA, our house IPA, won a gold medal at the World Beer Cup,” says Nat Pellman, general manager at Brouwer’s Café. “It’s an exciting achievement to be a part of. Adam is meticulous and it shows in the products that he delivers. We are proud to call him a friend.”

Last month, Reuben’s Brews began packaging its wildly popular Crikey IPA in 12-ounce cans, much to the delight of Seattle beer fanatics. This month, it celebrates the brewery’s fourth anniversary with an array of small-batch beers to commemorate the occasion. It’s hard to believe that a brewery could accomplish so much in such a short time. Not to mention, for Seattle’s thousands of beer lovers, it feels like Reuben’s Brews has always been there.

On Tap
Gose: A GABF gold-medal winner, this crushable Gose is smooth, slightly fruity, and purposely void of any bitterness. 4.3% ABV

American Rye Ale: A clean, crisp and refreshing rye-based ale that’s hazy and light in color, with aromas of tangerine and other citrus fruits. 5.4% ABV

Crikey IPA: Assertively hopped, with lots of tropical and piney character, but with a significant malt backbone to balance the fruitiness. 6.8% ABV

Imperial Rye IPA: Smooth and rich, with citrus notes leading the way, a bit of spiciness from the rye, and bitterness in the finish. 8.4% ABV

Imperial IPA: Surprisingly dry for a beer of this style, medium-bodied and very quaffable with prominent notes of passion fruit, grapefruit, and pine. 9.4% ABV ■ 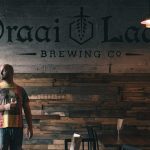 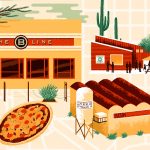