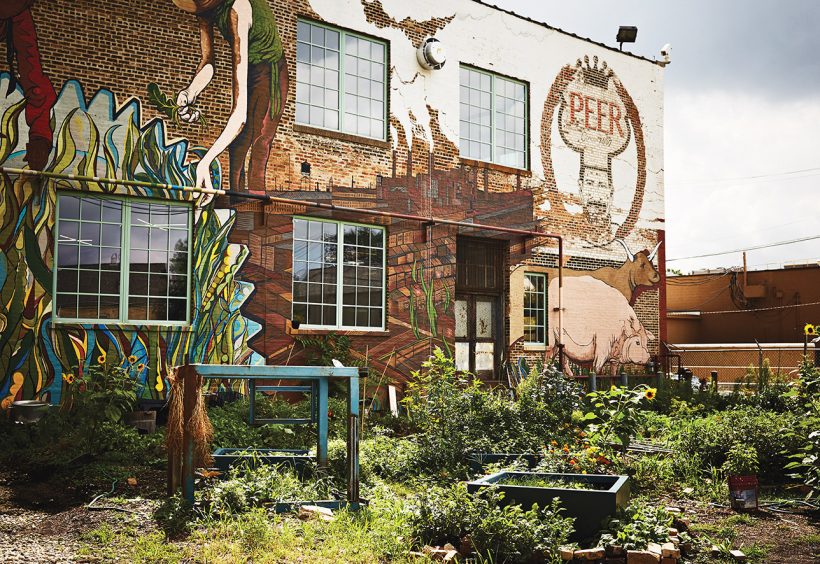 The garden outside of Chicago’s Whiner Beer. | Photos by Colin Beckett.

Outside the windows of Whiner Beer—located in a former meatpacking plant in Chicago’s south side—garden plots sprout raspberries, strawberries, carrots, potatoes, cucumbers, and zucchini. The chicken coops nestled beside the garden, though, were empty for some time. “I don’t think the chickens are here this year,” Whiner owner Brian Taylor says. There was a hawk, co-owner Ria Neri adds, that liked the chickens a little too much. Nearby are piles of compost, and behind the Plant, as the building is known, is an anaerobic digester. It’s not yet operational, but once it is, it’ll be central to the operations of this vertical farm that aims to create a closed-loop, zero-net-waste system. Food waste from the businesses housed in the building will go into the digester, which then captures the methane gas produced when microorganisms break down that waste and uses it to produce electricity and heat.

The new brewery is an integral part of that cycle. Not only will its spent grain help power the anaerobic digester (most of the spent grain is currently composted), its boiler is built to run off either natural gas or the methane gas the digester will create. There’s also a CO2 collector through which Whiner can degas its fermenters; the gas moves into an algae tank and is transformed into oxygen for a rooftop greenhouse once it’s built; the kettle stack vents to the roof and will help warm and humidify the greenhouse. At present a mushroom farmer in the building is using Whiner’s spent grain as a growing medium; the same farm pasteurizes the hay used for growing mushrooms with leftover hot water from the brewery. Other businesses in the Plant include a kombucha maker, a bakery, an aquaponics farm, a fruit and vegetable farm, and a coffee roaster—the last of which Neri also owns. 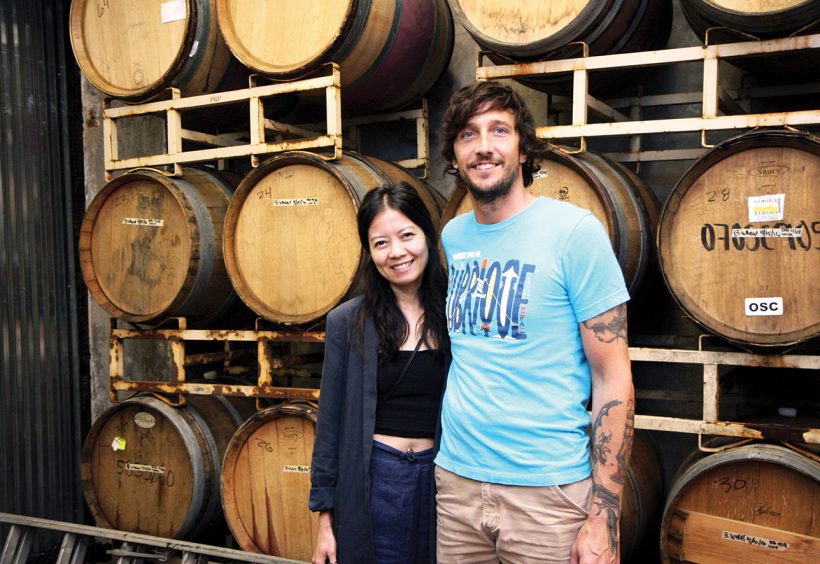 Whiner, which has been making beer since last December, is focused on wild beer in French and Belgian styles, most of it barrel-aged. Taylor estimates that the brewery will produce 3,500 barrels of beer this year, a number he plans to double in 2017. Its first two releases, both farmhouse ales, are a far cry from the Pale Ales or Porters many new breweries launch with: one, Rubrique-a-Brac, is a dry-hopped Biere de Garde fermented with Brettanomyces that sounds positively simple in comparison to the second offering, Le Tub. A wild Saison, Le Tub is soured with Brett and aged in Cabernet barrels inoculated with Lactobacillus for several months, then blended with a straight stainless-fermented Saison. Come fall they’ll have Miaou, a sour wheat, and Et La Tete, an apple Kölsch, all distributed in cans. Dozens of barrels hold a beer made with kombucha brewed down the hall, a pear and blackberry Saison, and a kettle sour with Brett, all of which will be sold in Whiner’s soon-to-open taproom.

The styles, unusual as they are, fall right in Taylor’s wheelhouse: an alumnus of Goose Island, he was instrumental in developing the “sour sisters” lineup of wine barrel-aged wild ales (including Juliet, Lolita, Halia, and Gillian). Before that he worked at Missouri’s Boulevard Brewing Company, where his mentor was from Belgium, and at Flying Dog Brewery in Colorado. Neri, a certified Cicerone, met Taylor while she was the beer buyer at Bangers & Lace, a Chicago beer bar. The two became friends over a shared love of sours before deciding to team up and create Whiner, an outlet for their interest in alternative fermentation that takes advantage of Taylor’s knowledge of microbiology. They weren’t consciously seeking out a sustainable space, Taylor says, but when they learned about the mission of the Plant they embraced it. The result: farmhouse-style beer brewed in a sort of urban farmhouse.

These days farmhouse ales—a broad category with roots in Belgian Saison and French Biere de Garde—are rarely brewed anywhere near a farm. And lacking that defining factor, it can be difficult to say what, exactly, farmhouse ale is; historically it was more of a loose category than a style. Saison and Biere de Garde were typically brewed in the cooler months for summer consumption, and whatever ingredients happened to be on hand went into them: wheat, barley, rye, oats, spelt, buckwheat. They often included spices and tended to be slightly higher in alcohol than the beer brewed for immediate consumption, which helped preserve them, but otherwise there weren’t many rules. Today there are even fewer rules.

“People don’t even know where the style started; it’s just another beer that they’re brewing,” Taylor says of modern farmhouse beers. “Technically, you get a yeast package from White Labs and it says ‘Saison’ on it, and you’re like, OK, that’s my farmhouse ale. I also get a package from White Labs.” No barnyard needed. Whiner, with its semi-industrial environment and focus on wild yeast and bacteria, has taken a different approach. In addition to using Brett and Lacto in their beers, Taylor and Neri are installing a coolship that will allow them to brew spontaneously fermented ales.

Located in a room that was a flash freezer back when the building was still a meat-packing plant, it’s connected to the outside via a vent with a fan and covered with an adjustable “roof” made from barrel staves that can be raised and lowered. When the hot wort fills the shallow tank, steam rises and the wort is inoculated with yeast and bacteria from the barrel staves as well as the outside air. The results, of course, are unpredictable. “People ask us about inconsistency,” Taylor says. “And we’re like, ‘We’re going to thrive on inconsistency. We’re going to make our beers taste a little different each time. You can get a million different flavors out of a wild yeast or bacteria strain that you would never get from a straight-up brewer’s strain of yeast.’”

Coolships are one way to express the terroir of a specific location. But terroir can also be expressed in other ways: breweries including California’s Sierra Nevada and Oregon’s Rogue grow some of their own hops; others, like Fonta Flora in North Carolina and Scratch in southern Illinois, forage for native ingredients and grow others. 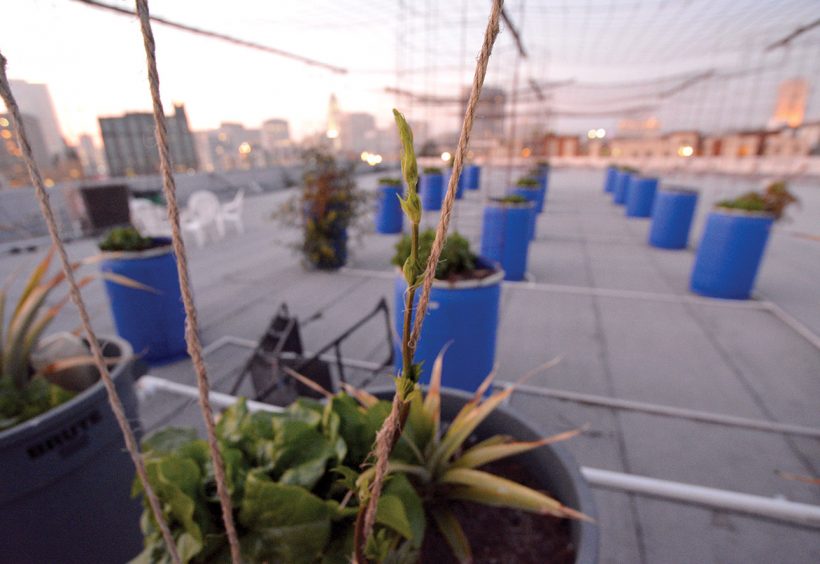 The efforts of urban breweries to use local ingredients, though, are usually limited to buying from nearby farmers. There are exceptions. LA’s Angel City Brewing has been growing hops on the brewery’s rooftop for the past three years in a project that came about almost by accident. In 2012, Angel City posted an ad on Craigslist offering up their spent grain, and local gardener Ramutis “Ray” Narkevicius responded; when the volume of spent grain produced exceeded his own needs, he partnered with the brewery to build a 4,000-square-foot rooftop garden using compost made from the grain. With the garden established, Narkevicius now only takes a little grain for his chickens.

In addition to growing vegetables, herbs, pomegranates, dragonfruit, and figs, Narkevicius and Angel City have been experimenting with different varieties of hops—Nugget, Chinook, and Columbus. At first, lead brewer Layton Cutler says, the plants did fairly well, producing about 15 pounds of hops in 2014—enough to wet-hop the brewery’s Rooftop Pale Ale, though they did use another 15 pounds of hops for bittering. Last year, though, the hops did “quite badly,” which Cutler attributes to LA’s hot, dry weather, the rooftop’s lack of shade, and the fact that winter temperatures never got cold enough to allow the plants to go into dormancy. This year they’re trying again, and believe they’ve solved the problem by taking clippings of their existing rhizomes and replanting them; Cutler predicts a yield of 15–20 pounds this year. Still, Angel City’s rooftop hops are more experiment than anything else, and nothing else from the rooftop farm grows in large enough quantities for brewing use.

There’s a limit to what urban agriculture can reasonably produce, says Youbin Zheng, a professor of environmental horticulture specializing in green infrastructure (like green roofs) at Ontario’s University of Guelph. “For barley, certainly it’s not practical, it’s not economical,” he says. And while green roofs are exploding in popularity, he sees limited possibilities for hops growing: rooftops tend to be windy and hops need trellises to grow. City backyards tend to be small, too. Using urban gardens and green roofs for fruits, herbs, and leafy vegetables makes more sense, he says. 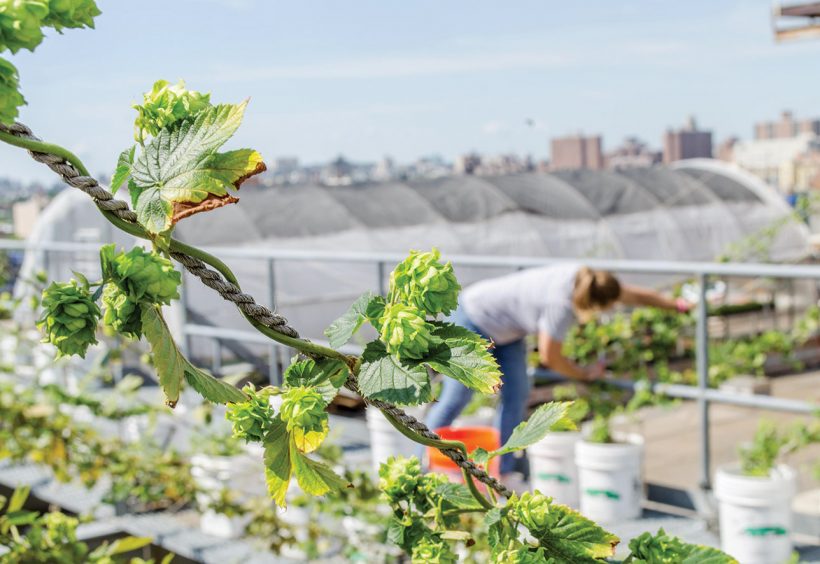 Even Tinyfield Roofhop Farm, a rooftop farm nine stories above Brooklyn that’s focused on growing hops, is seeing very small yields at this point. While it’s still new—last year was its first growing season—the 60 plants, which co-founder and owner Keely Gerhold started from year-old rhizomes to jump-start the process, produced just two pounds of Cascade hops (she’s focusing on a single variety for now). It did, however, turn out to be enough to wet-hop nearly 100 gallons of Amber Ale that Long Island’s Lithology Brewing Company made in collaboration with Tinyfield.

“It’s not the ideal rooftop for farming,” says Gerhold, noting that microgreens and flowers occupy close to half of the 1,000 square feet she rents on the top of an old pharmaceuticals factory, “but it’s the ideal rooftop for hops.” Small as it is, she envisions Tinyfield as a place that can connect the worlds of agriculture and brewing, helping beer drinkers become more conscious of where their beer comes from.

With more mature hop plants this year (plus another 20 planted in the spring), she’s hoping to harvest 5 pounds of hops. She’ll be collaborating with the equally tiny Strong Rope Brewery in Brooklyn to create a beer in a yet-to-be-determined style on the brewery’s 2-barrel system—probably an IPA or Pale Ale, says Strong Rope founder Jason Sahler. The 7-month-old company is licensed as a farm brewery by the state of New York, which means that at least 20 percent of the hops and 20 percent of all other ingredients must be grown in New York state (in 2019 that percentage will increase to 60).

Sahler is ahead of the curve: he may not be growing anything behind (or above) the narrow taproom he opened on President Street, but he works with 10 hop farms and four malthouses to source 100 percent of the brewery’s hops and 90 to 95 percent of its malt from within the state. Fruit used in the beer also comes from nearby farms—but so far, Tinyfield is the brewery’s only source of city-grown ingredients. Sahler wanted to create a farm brewery in the city not to promote urban agriculture (though he does support the idea), but to “show that you don’t have to be on a farm to use New York state ingredients,” he says.

Taylor plans to grow some hops at the Plant next year, but only expects enough for a small batch of beer. That’s the issue with hyperlocal sourcing, he says: he’s aging a beer with raspberries grown on the farm outside his windows, but could only fill one barrel; he’d need about 700 pounds of fruit for a full batch of beer. Still, being located in the Plant has affected how Taylor brews in some ways. “I would make the same beers no matter where I was,” he says. But that little farm will supply the bacteria and yeast for the coolship, which Taylor says he wouldn’t have set up to draw air from outside if he were anywhere else in the city. He would never have made a kombucha beer without having a source for it nearby, either. And at some point, he promises, he’s going to try doing something with the mushrooms grown in Whiner’s spent grain.

Even without growing hops, Taylor already considers Whiner a farm brewery. “You look outside, and we have an urban farm. It’s 2016. It’s really tough to be an old-school farmhouse brewery where you’re in a barn, brewing beer. Farmhouse ales … this is about as close as you get.” ■ 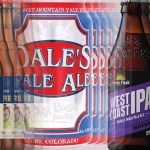 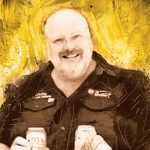