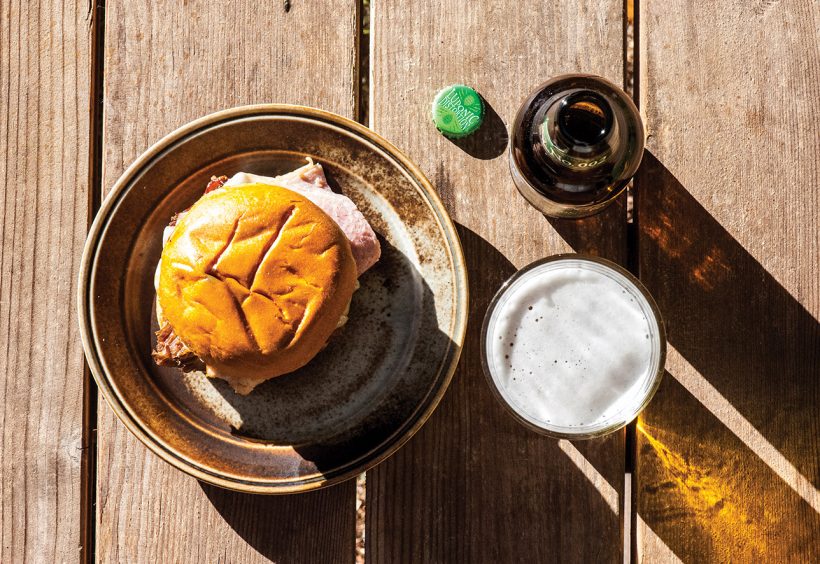 Since the United States has eased Cuban trade and travel restrictions, this large island’s borders are open to the US. Colonized by the Spanish in the 15th century, this island’s food culture has also had contributions from the likes of Africa, France, Portugal, and China, all of which have influenced Cuba’s food traditions, flavors, and ingredients. To add more to this meal, try the Fried Plantains in issue #19, which will go great with these Cuban-style recipes.

Cuban-Style Braised Pork Shoulder in Nut Brown Ale
I love the flavor combination of garlic, cumin, and orange. These flavors sing together, complementing each other, adding an earthiness from the cumin and acid and sweetness from the orange (especially if you can find bitter oranges), while the garlic contributes its bite and sweetness as it roasts. Onions and a Nut Brown Ale lend a melanoidin complexity to the slow-braised pork shoulder, creating a wonderful roast that can be used many different ways. For the first night, serve it as a Cuban entrée, with a side of beer-stewed black beans, some arroz blanco (white rice scented with garlic) and the braising liquid as a sauce. The next day or night, pull apart the pork roast, toss it in the braising liquid, and add it to some ham, Swiss cheese, and a sharp, spicy beer mustard to make a Cubano-style sandwich.

Cumin Orange Garlic Rub Directions
Chop the garlic into the salt until the cloves are cut into small pieces. Then with the blade side of the knife, smash the garlic and salt together, using the salt crystals to grind up the garlic to form a paste. Add the ground cumin, marjoram (or oregano), freshly cracked peppercorns and orange zest to the garlic, smashing the ingredients together, making a seasoned paste. This will take about 2 minutes. Alternatively, all the ingredients can be pulsed to make a paste in a food processor.

Rinse the pork shoulder under cold water to remove any juices and pat dry with paper towels. Place on a cutting board and use a sharp knife to cut a diamond pattern into the meat. Make parallel cuts about 3/4 inch apart and about 1/4 inch deep one direction, then turn the roast 90 degrees and repeat the cuts. These crevasses for the Cumin Orange Garlic Rub will season the protein while creating extra surface area for the slow cooked meat and help to render out some of the fat.

Next, with a sharp paring knife, carefully stab the pork roast, making a cut the width of the knife’s blade, the perfect size for a peeled garlic clove. Make 12 holes like this, evenly spaced around the roast, avoiding the bone. Massage all of the Cumin Orange Garlic Rub onto the pork, covering the sides and forcing some into the holes. Take the 12 garlic cloves and press them into the pork roast.

The pork roast is best if wrapped in plastic wrap or placed into a large sealable bag and refrigerated for 24 hours to marinate in the rub, allowing the seasoning to fully infuse the large roast with flavor.

In a large pot or Dutch oven, add the sliced onions, bay leaves, olive oil, and salt, tossing with a spoon to coat evenly with the oil. Place the rubbed pork roast on top of the onions and carefully pour the Nut Brown Ale down the side of the pot or pan, so as not to wash the rub off the roast. The roast should be between 2/3 and 3/4 submerged in beer. Add the orange juice, cover the pot with a tight-fitting lid, and place into the center of the preheated oven. Let the pork braise for 5 – 6 hours, or until the meat’s internal temperature reads 210°F, allowing the collagen to fully break down, making the pork tender, sticky, and delicious. Using tongs and a spatula, carefully remove the pork roast from the braising liquid and place on a cutting board. Tent the roast with aluminum foil and allow it to rest for 20 minutes, making it easier to slice.

As the meat is resting, reduce the braising liquid by half until it forms a sauce, thickening slightly. Add the remaining orange juice to brighten the sauce. Pour it into a dish to serve alongside the roast. This is also the perfect time to make a batch of arroz blanco to create a more authentic Cuban meal.

To Serve
There are two ways to use this roast. One is to slice it against the grain into pieces of medium thickness; too thin, and the meat will flake apart. Another way to serve it is to pull the meat fibers apart, creating pulled pork. Pour some of the braising liquid sauce over the meat, tossing to coat evenly before serving. Either way, arrange the meat onto a serving platter or prepare individual plates and serve with the braising liquid sauce. 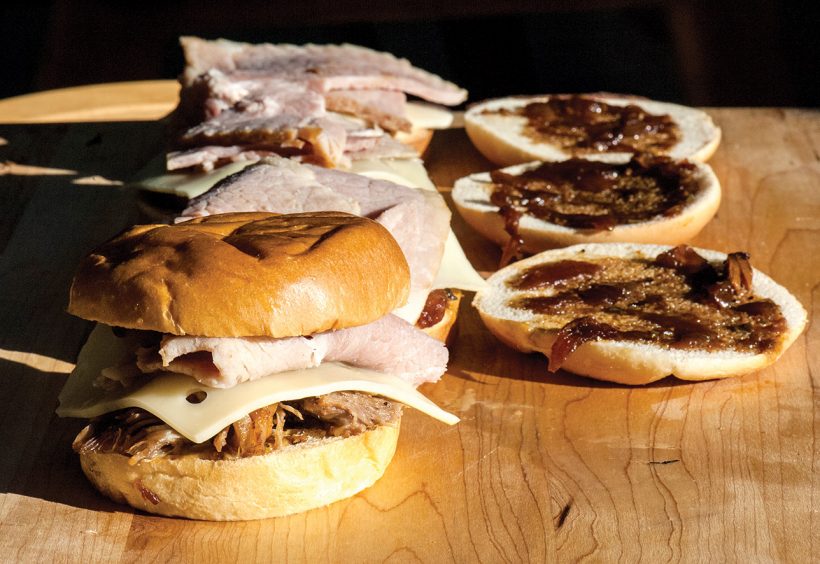 Cubano Sandwich
Once you’ve had a Cubano sandwich, you crave it periodically. Cuban-style roasted pork is sliced thin (or pulled) and layered with sliced boiled ham, dill pickles, Swiss cheese and yellow mustard onto a special Cuban-style roll, then lightly brushed with oil (or melted butter) and pressed in a panini grill until the outside of the roll is crisp and crunchy. Traditionally the Cuban-style bread is similar to a baguette, but made with lard. As this bread is hard to find, there is an alternative sandwich, called a medianoche, which is made on egg bread similar to a Jewish challah, with all of the same sandwich ingredients above. As neither were available in my market, I used a brioche-style bun to get a similar finished sandwich.

Directions
Begin by slicing the bread and laying it on a cutting board. Spread some of the IPA Beer Yellow Mustard onto one side of each sandwich. Take the Cuban Style Braised Pork Shoulder in Nut Brown Ale and add 4 ounces to the mustard side of each sandwich. Add 2 ounces of ham to the top of the pork, then two pickle slices, followed by two slices of Swiss cheese. Top each sandwich with the other piece of bread, then lightly brush the top and bottom outside crust with the butter or oil. Place into a panini grill that has been preheated and press the sandwich for 4 – 5 minutes, or until the meat is hot, the cheese has melted and the bread has a golden brown crust. Remove the sandwiches from the panini grill with a spatula and slice in half on the bias. Serve immediately.

IPA Beer Yellow Mustard
Mixing up your own mustard makes this sandwich complete, giving a touch of nasal heat to cut the richness of the pork.

Directions
In a small bowl, add the mustard powder, IPA, braising liquid sauce, and salt. Mix the mustard with a spoon until all of the lumps are gone. Let it sit for 15 minutes to activate the enzymes. This condiment is best used right away, but can be refrigerated for up to a month, losing intensity the longer it sits. ■ 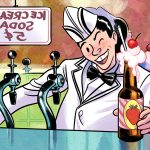 Previous: Bring All the Brewers to the Yard: Strawberry Milkshake IPA 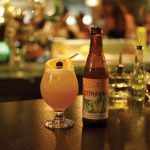