Where to Drink in Washington DC 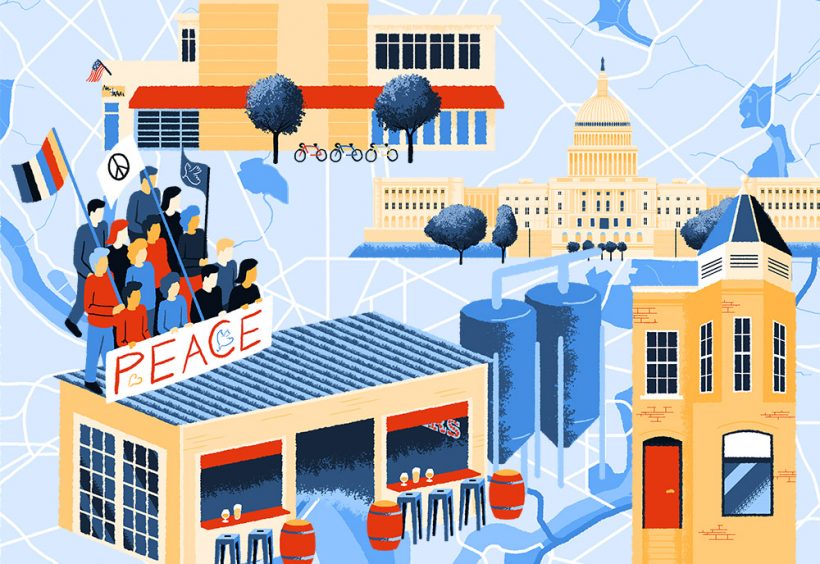 Although the nation’s capital was slow to embrace locally brewed beer when the first wave of microbreweries swept over other parts of the country in the 1980s and ’90s, a recent shift has created a flourishing beer culture. It’s due in part to the city’s growing culinary scene, which has embraced beer like it did wine and cocktails, and its unmatched access to brands thanks to “grey laws” allowing bar and restaurant owners to self-import beer not distributed through the traditional three-tier system. Today, despite a 55-year gap without a production brewery, the District of Columbia is once again embracing an industry to which it has strong ties.

Brewing played an important role in Washington’s history, beginning in 1770, when Andrew Wales opened the first brewery six years before the Declaration of Independence, to the Civil War, when thirsty troops combined with a beer excise tax helped to finance the Union’s war effort.

The city’s earliest brewers made English-style ales before 19th century German immigrants introduced lagers, Weissbiers, and open-air beer gardens, centers of social congregation. By 1880, beer was big business in DC, and its 14 production breweries had a combined annual capacity of 1 million barrels. German immigrant Christian Heurich controlled half of that volume at a large brewery in Foggy Bottom, where the Kennedy Center stands today. In fact, before Prohibition, brewing was the second largest employer in the city after the federal government.

After the 21st Amendment was ratified in December 1933, only two of the city’s six breweries reopened. But competition from national brands forced both to shutter within two decades.

DC’s modern beer culture can be traced back to one bar: The Brickskeller, which opened in Dupont Circle in 1957 and eventually stocked more than 1,000 brands of beer (earning it the Guinness World Record in 2003) when other DC bars offered little more than macro lagers. The basement bar of the iconic institution was frequented by elite patrons from both political and brewing circles, and often hosted tastings and educational events with leading brewers from around the world. Although it closed in 2010, curious visitors can still see its brick-walled saloon and breweriana collection at The Bier Baron, which operates in the same space.

The first brewpub to open since Prohibition was Capitol City Brewing Co. in 1992. Stop by the original location downtown for a taste of Capitol Kölsch or Prohibition Porter poured straight from the copper-clad conditioning tanks behind the bar. Today, 11 breweries and brewpubs operate within the district, with at least five more in planning, according to the DC Brewers’ Guild.

Since space is at a premium in Washington, most production breweries cluster near the city’s northeastern outskirts. When DC Brau Brewing opened near the Maryland border in April 2011, it was the first production brewery to operate within the district since Christian Heurich Brewing Co. closed in 1956. To honor its predecessor, DC Brau recreated several batches of Heurich’s Lager. This spring, the company will triple its production capacity with the addition of a 30-barrel brewhouse next door.

A relative explosion of new breweries has occurred in the years since, including 3 Stars Brewing Co. in 2011, known for its popular Ghost White IPA and experimental Saisons, Atlas Brew Works in 2013, which recently added a new taproom for serving pints of District Common and Ponzi, a West Coast-style IPA, and in 2014, Hellbender Brewing Co., makers of Red Line Red Ale and Bare Bones Kölsch. 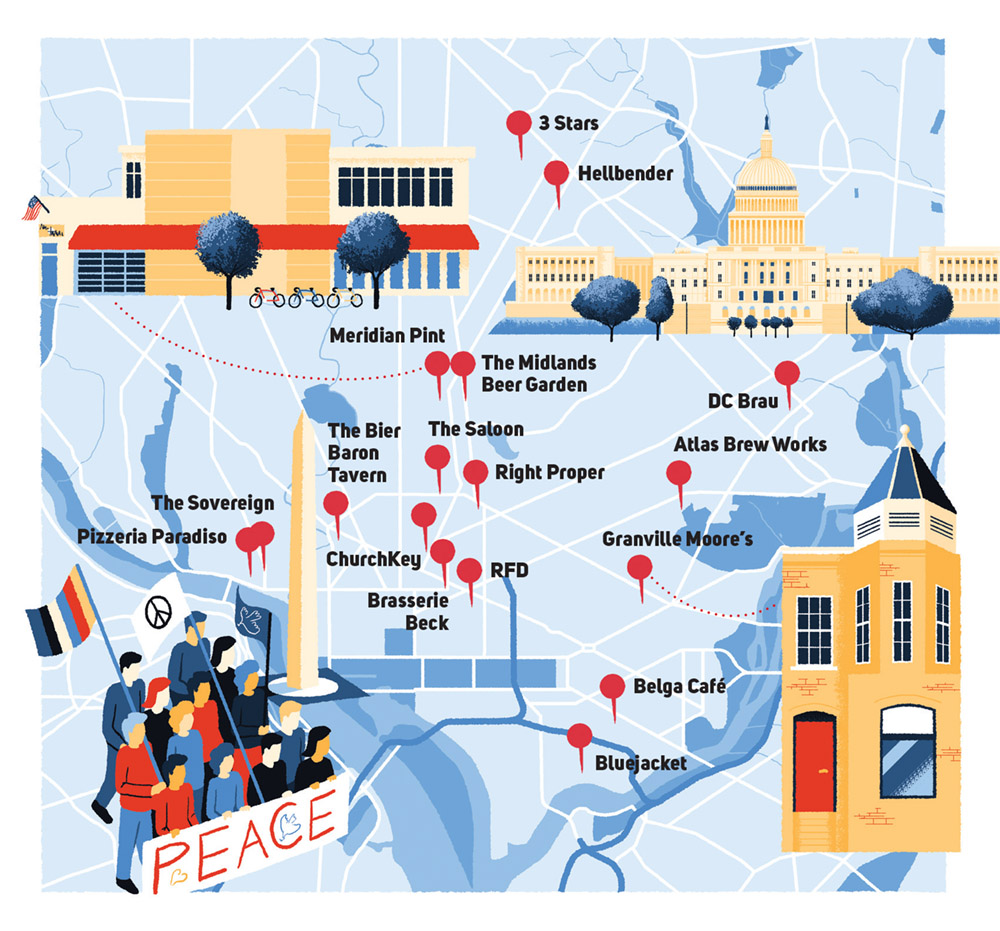 Located above the swanky Logan Circle restaurant Birch & Barley, the modern icon of the district’s bar scene is Churchkey, with 50 drafts, five casks, and more than 500 bottles. Thanks to beer director Greg Engert, who got his start bartending at The Brickskeller, the selection here includes hard-to-find releases from wave-making young breweries like Ocelot and Other Half, as well as beers from Engert’s own 3-year-old Navy Yard brewery Bluejacket. Arrive early to snag one of the coveted bucket seat barstools or, for more room, plush booths.

Downtown, head to Belgian chef Robert Wiedmaier’s Brasserie Beck for a taste of his private label Belgian Pale Ale, Antigoon, brewed by Brouwerij de Musketiers. Pair it with hand-cut frites or a croque-madame sandwich. Other Belgian bars in the district include Granville Moore’s, a rustic tavern on H Street that pumps out 1,200 pounds of mussels each week from a 150-square-foot kitchen, Belga Café, a Capitol Hill restaurant with a menu page dedicated to Trappist beers, and The Sovereign, a hip Georgetown spot that serves imported bottles of Belgian Lambic (think Cantillon, Boon, and De Cam) from the traditional wicker basket.

Escape the trendy spots on the popular U Street corridor with a stop at The Saloon, a no-frills bar with no TVs, no standing (employees will shuffle groups around to help your party find a seat), and no splitting checks. Photos of schools built with proceeds from this non-profit business paper the walls, and the menu offers blunt guidance (“We don’t sell martinis”) alongside listings for European imports like Schloss Eggenberg Urbock 23º and Franziskaner Hefe-Weisse.

From Right Proper, continue 1 mile north to Meridian Pint in Columbia Heights. Open since 2010, this bar and restaurant helped to usher in DC’s modern beer scene, including hosting the launch party for DC Brau. Today, it features 23 taps with beer from mid-Atlantic breweries like Maryland’s Manor Hill and Virginia’s Port City and Pale Fire. The same owners have since opened a second location in Brookland and a beer, barbecue, and bourbon bar in Adams Morgan, Smoke & Barrel.

And fittingly, perhaps signaling that the city’s beer scene has come full circle, open-air beer garden The Midlands opened last November in Park View, echoing the once-popular German beer gardens of Washington’s past. Inside, the square bar serves more than 15 beers from both Germany (Kostritzer) and Maryland (Denizens) in half- and full liter steins to be enjoyed at picnic tables or while playing games like corn hole and darts. 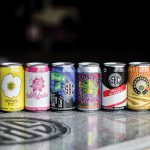 Previous: The Southern Brewing Company: There's No Taste Like Home 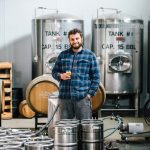