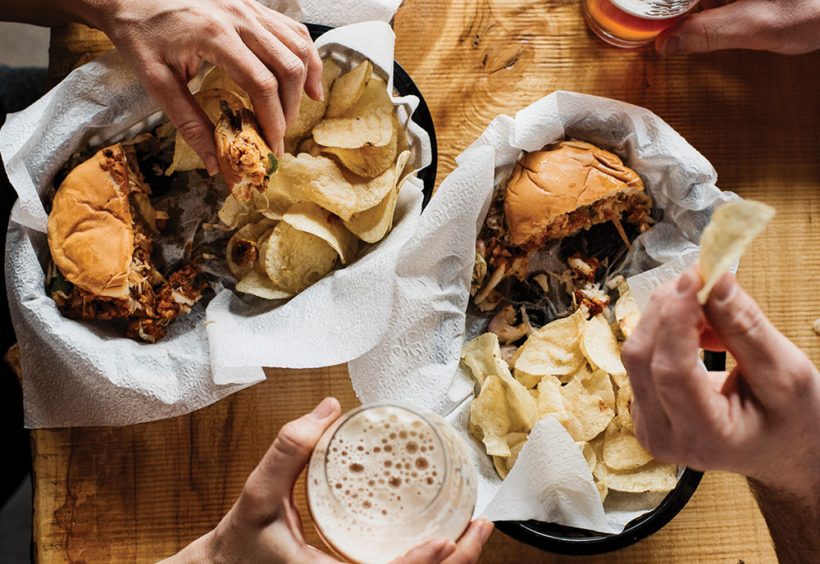 Gone are the days when brewpub fare meant chicken wings, burgers, or fish and chips. Whether motivated by health, concern for animal welfare, or consideration for the environment, interest in plant-based diets has grown, and pub grub has begun to change with the times. Beer-focused dining isn’t just for meat eaters anymore.

A lack of meat-free options is precisely why vegans and beer enthusiasts Ray and Sarah McMackin opened The Beer Plant, a completely plant-based gastropub with 40 taps in Austin, Texas. For years, the couple had a difficult time finding things to eat while out exploring the country’s beer landscape, Ray explains. “It seemed like it was pork belly and more pork belly.”

The McMackins took inspiration from British taverns and Austin’s food scene, creating flavorful dishes like poblano cashew mac and cheese to go along with beers like Cedar Creek Brewery’s Dankosaurus IPA. In a city known for barbecue, the pub is a welcome addition for vegetarian visitors, but the typical crowd includes a wide range of palates. For both meat-free eaters and beer lovers, it’s an introduction to a new experience.

“If you’re a plant-based eater, you maybe didn’t know beer could be so diverse,” Sarah McMackin says. “And if you’re a beer enthusiast, you see you can eat a plant-based meal and walk away feeling satisfied.”

Beer director Sahara Smith says a plant-based restaurant and bar is a refreshing concept. “In the beer industry, we see a lot of cuisine that is dominated by meat and other very heavy foods, but beer can be a very delicate, nuanced thing and pairing it with cleaner foods can really allow some of those more delicate flavors to come through.”

For example, Smith pairs The Beer Plant’s Purple Pig sandwich (beet “bacon,” avocado, sunflower sprouts, tomatoes, and a cashew mayo) with an Imperial Stout: The Good, The Bad, and The Unidragon from Clown Shoes. “It seems like a big beer to pair with a plant-based entrée,” she says, “but it tastes amazing next to the bold flavor of the smoky beet “bacon.”

When it comes to pairing beer and food, the fundamentals are really not that different with meat-free dishes, says Joe Dinan, head brewer and co-owner at Sanctuary Brewing Company in Hendersonville, N.C. “People don’t miss the meat, they miss the flavors and aromas—the buffalo sauce, barbecue sauce.” So his animal advocacy-focused brewery only serves vegan items from their pop-up kitchen and a handful of neighboring restaurants. To make his point, Dinan suggests pairing Carolina Panther Porter with the vinegar-based barbecue tempeh sandwich from Moe’s BBQ.

The brewery hosts fun theme nights, such as a Tuesday taco bar and build-your-own vegan hot dogs on Mondays. Co-owner Lisa McDonald maintains it’s the completely meat and dairy-free menu—coupled with a love for animal advocacy—that draws vegans to their downtown brewery. Among other events benefitting both animals and local residents, McDonald and Dinan also host a free Sunday meal for the community. McDonald says that besides offering a hot meal to those who may not otherwise have had one that day, it gives people who normally wouldn’t go out for vegan food the chance to do so.

“Non-vegans get to see we’re not just eating twigs and lettuce,” she laughs, adding that it’s the hearty dishes on their menu that are the most popular—options like barbecue “chicken,” pimento “cheese” dip, and a potato pizza.

Comfort food and classic pub grub-inspired items are also in high demand at Pig Minds Brewing Company in Machesney Park, Ill., says founder and vegan Brian Endl. Spicy Korean barbecue soy tacos, a house-smoked barbecue “pork” sandwich, and nachos complete with chili, cashew cheese, soy ground “beef,” and a house-made sour cream regularly end up at the top of the night’s orders. Endl says both vegetarians and vegans from town visit along with day-trippers from Chicago, Madison, and even Minneapolis.

But being in a blue-collar, industrial area near the Illinois-Wisconsin border, most patrons are actually meat eaters, he says. In fact, when vegan Jasmin Singer, senior editor at VegNews magazine, was on a road trip and found a vegan microbrewery near Rockford, Ill., she thought it was a joke. Instead, it turned out to be her favorite stop on a three-week journey. “It wasn’t outwardly branded as vegan, so many people just thought they were eating great bar food, not even necessarily realizing that no animals were harmed in the making of any of the ingredients,” she says.

In fact, despite some initial backlash when opening in 2012, Pig Minds is going strong, planning a $1.2 million, 6,000-square-foot expansion. Endl says serving a plant-based menu with beer makes vegan food more approachable. “We have people that probably wouldn’t go into a vegan café, but because of the beer, they’ll try it,” he explains.

In a country with at least 10 times more fast food restaurants than craft breweries, it might seem like a small change. But both plant-based eaters and flavorful beer drinkers tend to be passionate groups. Perhaps the intersection of these worlds will turn out to be a trend that grows greener over time. ■ 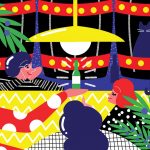 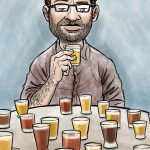