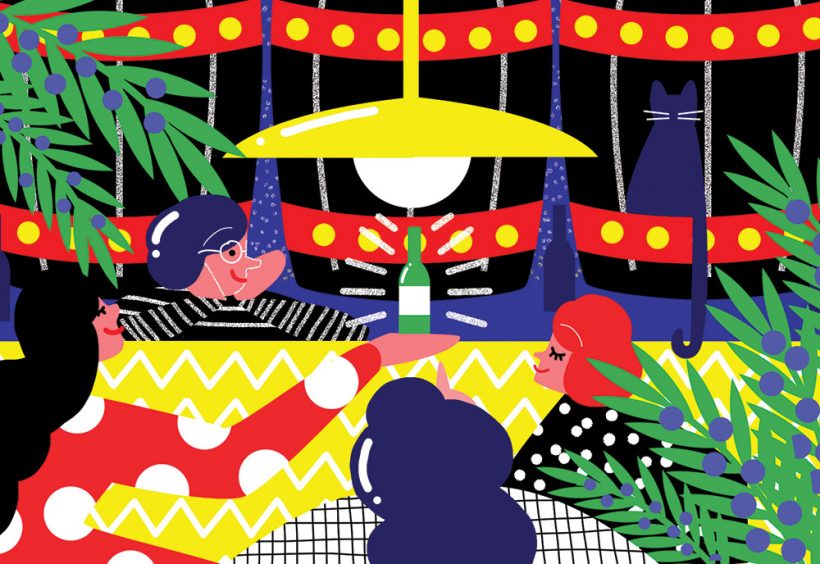 With the recent popularization of gin barrel-aged beer, it’s easy to forget that beer and gin were once bitter enemies, as famously illustrated by the English artist and satirist William Hogarth. His moralizing 1751 prints “Beer Street” and “Gin Lane” depicted the evils of gin versus the merits of beer. Today, we owe the newfound friendship of these two beverages to a previously extinct variety of 19th century gin called Old Tom.

Gin has its origins in Holland, where it was used as a medicinal drink to treat everything from gallstones to gout. Popularization occurred when the British discovered it during the Thirty Years War and nicknamed it “Dutch Courage.” Eventually, the drink branched off into its two best-known styles: Dutch Jenever and London Dry. Jenever is a sweeter, aged gin that’s less juniper-forward, closer in taste to whiskey, and still common in the Netherlands. London Dry, meanwhile, came about with the advent of the column still, which allowed for a smoother neutral spirit that is dry and more juniper heavy.

“Pot distilled Old Tom gin was in fashion until the mainstream rise of the column still,” says Art Tierce, assistant distiller at Oregon’s Ransom Wines and Spirits. As he explains it, the column still’s invention in the 19th century led to the dry, light bodied, and neutral but heavily aromatic London style of gin most people are familiar with today.

Ransom began developing its Old Tom recipe in 2007 after Tad Seestedt, Ransom’s founder, bumped into old friend Dave Wondrich, a writer and cocktail historian. Wondrich told Seestedt of a long-lost type of gin called “Old Tom.” The style ostensibly earned its name from the tomcat-shaped wooden plaques hung outside taverns in 18th century London. Passersby could drop coins into a slot in the plaque in exchange for a shot of gin, which the bartender would serve via a pipe leading back outside to the customer’s awaiting cup.

Old Tom is sweeter and fuller bodied to “highlight the malty flavors of barley, keep a simplistic botanical blend, and finally rest the distillate in a barrel for further flavor development,” says Tierce. The fact that oak casks were once the main form of storage aided in the decision to age Ransom’s gin for 6–8 months in toasted French oak barrels previously used for wine. Barrel-aging, a high proof corn spirit infusion mixed with a malted barley wash, and pot distillation make Ransom’s Old Tom—first released in 2009—a gin for the whiskey lover.

Ransom’s resuscitation of the style and the work of Yetta Vorobik, the company’s barrel broker at the time, led Oregon to become the small but unlikely center of gin barrel-aged beers. “It seemed to me that our brewers in Oregon could have fun with my friends at Ransom’s barrels,” says Vorobik. “Aging beer in a barrel gives the beer a chance to almost breathe in a way, while the barrel lends many of its unique characteristics to the beer.” According to her, Upright Brewing, Breakside Brewery, Fremont Brewing, and Gigantic Brewing were among the first in the Pacific Northwest to age beers in gin barrels.

Upright led the way when it put a Saison made to celebrate the brewery’s first anniversary in a Ransom Old Tom barrel. “That anniversary beer we did was, as far as I know, the first gin barrel beer,” says Upright owner and brewer Alex Ganum. Since that 2010 release, Upright has kept gin barrels for blending two different beers. “[Old Tom] gin casks lend really pleasant orange and lime notes along with other complex botanicals,” he says. “There’s certainly a spirit element to them as well that ends up in the beer, [and] the extra neat part about those barrels is the slickness they lend the mouthfeel, presumably from the oil content of the botanicals.”

In Florida, Justin Stange of 7venth Sun Brewery had already used juniper berries in beer and wanted to go further. “Being a gin fan, it only seemed natural to take things to the next level and seek out a gin barrel,” he says. Sourcing lightly toasted Old Tom barrels from Ransom and charred first-use Ginskey barrels from Vapor Distilling in Colorado, 7venth Sun put the latter to work aging Soul Cleaver Saison. “The toasted wine barrels are much more subtle than the intense flavors added by the charred barrels,” Stange says. “Using gin barrel-aged beer to blend with fresh beer is also fun, especially [with] hop-forward beers.”

Chicago’s Half Acre Beer ventured into gin beer territory in 2013 when it released Gin Barrel-Aged Pony Pilsner, a German-style Pilsner aged in second-use gin barrels from Corsair Distillery. “The idea for Gin Barrel Pony was built with a specific barrel in mind,” says Matt Young, Half Acre’s head brewer. “The gin is incredible. The distillery is located in the town I went to college in, and one of the distillers is my old college roommate and [a] close friend. He thought the barrels could add a special layer to a beer, specifically a more delicate style such as a Pilsner.”

Corsair in Nashville has aged its gin in white oak barrels that previously held spiced rum since 2010. Owner and distiller Darek Bell says he was inspired by the recent resurgence of gin and the fact that “barrel-aged gin used to be quite common.” Like Tierce at Ransom, Bell finds that barrel-aged gin “picks up a lot of whiskey flavor [and] some sweetness and spices, with the barrel itself adding vanilla, caramel, and leathery flavors.”

Young found “the oak and rum-based flavors from the barrel enhance the full malt flavor of the beer, and the gin botanicals enhance [its] spicy and floral hop character.” In fact, Gin Barrel-Aged Pony Pilsner achieved the balanced flavor profile that Young was looking for to such a degree that it “feels almost like you’re drinking a beer cocktail.”

The challenge for anyone wishing to work with these containers, however, is that demand for wood vessels of any kind is at an all-time high. “Just about every barrel we plan on racking this year is already promised to a brewery or [a] cidery,” says Tierce at Ransom. Yet for brewers who have fallen for the alluring possibilities of gin barrels, the search goes on. “We plan to continue using gin barrels so long as we can find a source for them,” says 7venth Sun’s Stange. ■ 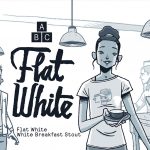 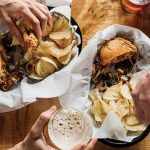