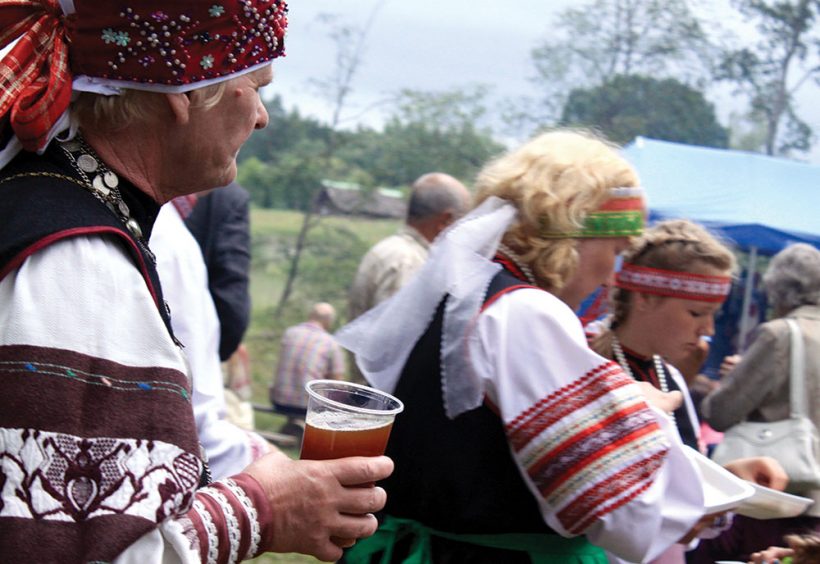 “Why are you here? And how did you find out about us?” asks an inquisitive woman in full traditional garb, her single-breasted, silver-plated necklace shining brightly below her colorful embroidered headgear. She’s curious, but mostly bewildered at the presence of foreigners in Setomaa, a region that encompasses part of southeastern Estonia and a larger slice of western Russia. A fireworks-like explosion disrupts her line of questioning, so she takes another sip from her tawny-colored brew. “Old army trucks are getting ready for the parade,” she informs us. “This is Kingdom Day, the one day in the year we Setos declare independence. We elect a king for the year, a champion group of polyphonic Leelo singers, and the best local brewer. The brewer from Rikka Ivvani Talu over there,” she says, gesturing toward the booth of a farmstead hailing from the village of Küllätüvä, “is a four-time õllemeister.”

A few shared sips later, and it’s clear that the local õlu, or beer, is memorable; ripe with prune and raisin aromas, it’s a sweet concoction with a rich body bursting with rye spiciness. And, as this talkative woman keeps telling her people’s story, it becomes obvious that this forested region straddling two countries is a microcosm worth exploring. These are not Estonians. They are not Russians, either. They are Seto. And while their ritual beer plays second fiddle to that of the Koduõlu-brewing islanders from the west, they too are hoping it and the rest of their endangered culture doesn’t sing a swan song anytime soon.

When the Soviet Union dissolved and its soldiers left the new incarnation of Estonia in 1991, the Setos found themselves in a bind. Under the communists, their territory had been somewhat stabilized, which allowed them to try and regroup after a significant decrease in population earlier in the 20th century. But more recently, Setomaa, the homeland of the Seto, has run into a major obstacle: the new border with Russia runs right through it. Today, this route cuts through the once-bustling village of Saatse. Under penalty of arrest, drivers cannot get out of their cars when traversing this frontier, even for mechanical problems.

Unless Setos have relatives buried on the Russian side, visas are mandatory for anyone trying to cross this border. As a result, most Setos have left the area for other parts of Estonia. A few hundred remain on the Russian side. This has led to the dilution of the Seto language, a member of the rare Finno-Ugric family, and the slow fading of the Seto culture. Barely 4,000 of them still live in Setomaa today. Yet of this small, marginalized population, more than a dozen determined individuals continue to brew the traditional Seto Õlu. 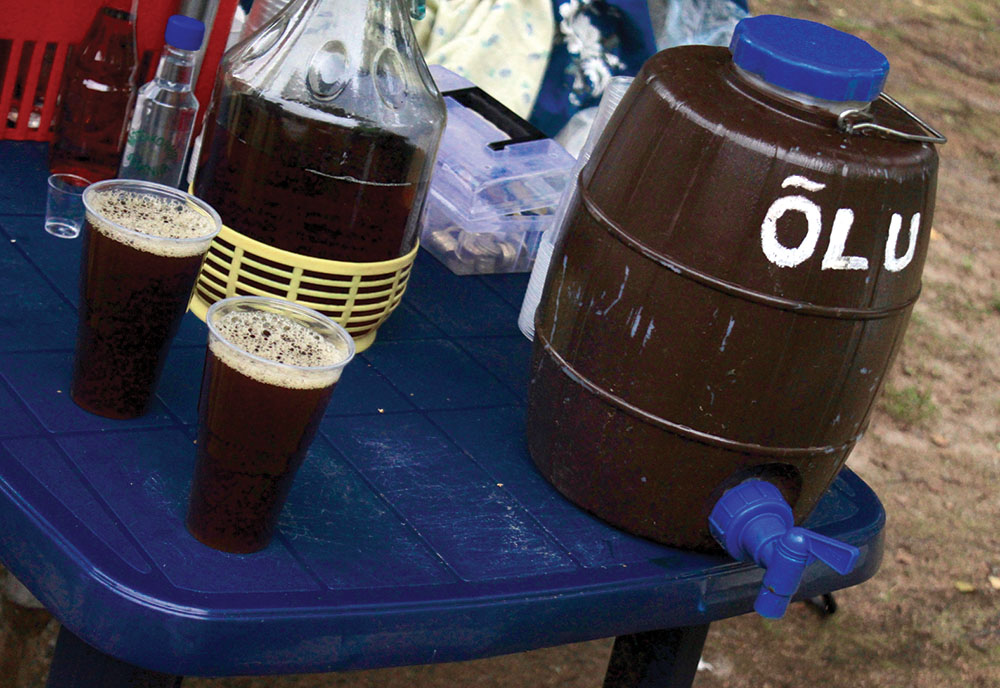 Defining a Style with Many Relatives
Twisting through singing and dancing performances at the Kingdom Day festival quickly proves to be the best way to meet the most vocal advocates of this hidden brewing culture. Email contact prior to the yearly festivities tended to be a hopeless enterprise, and a total lack of advertising notwithstanding, even the most decorated Seto brewers take time to warm up to visitors. Not keen to answer questions from fellow Setos or traveling strangers at their booths, few brewers sing their own praises. Averting eye contact and politely invoking language barriers, one might think these shy brewers should change their tune if they want to help themselves gain visibility. After all, few Estonians or Russians even know of the Seto’s beery ways.

At first glance, it seems rather ironic when you consider this people’s plight—they’ve struggled for centuries for recognition and survival. Then again, many a modern government has been known to dilute an age-old tradition in the name of business and taxation. Just take the rural brewers in nearby Lithuania: their ranks crashed from roughly 400 at the onset of independence to a couple dozen as soon as the newly-appointed government established rules to their game.

A few glasses and information-gathering sessions later, however, it became clear that the traditional beer of the Seto was born from their taste for Kali, the local version of Kvass. In Soviet times, many would simply add sugar and yeast to store-bought Kali in order to transform it into a rough beer. But in terms of taste, this fruity brew also shares a lineage with Lithuanian Keptinis, British Mild Ale, and perhaps even root beer.

To begin with, Seto Õlu seems to be a cousin of Keptinis. Geographical proximities aside (both are brewed in the eastern areas of their respective Baltic countries), the two are essentially baked bread-malt concoctions. Although the Lithuanian version is made from scratch by baking a thick mash of barley malt until a dark and toasty crust is formed, the beer brewed in Setomaa derives its character from a ready-made dark rye bread bought from a local bakery. Both types of bread are broken down in hot water for a warm mash. And both beers are also usually served raw, or unboiled.

An important difference between the two recipes, though, is the fact that the Seto bread is dark and dense to the core. There are seemingly no simple sugars left to ferment; this õlleleib, or beer bread, is essentially a specialty malt package. The bread the Lithuanians make, on the other hand, is not burnt all the way through. In both cases, the resulting brew is a hazy shade of brown and emphasizes sugary, almost fruity flavors that reference toasted bread. Moreover, the links with British Mild Ale are numerous. Served young, fresh, and smoothly carbonated with a low level of hop character, it’s a humble product based on cereal flavors, and it’s meant to be drunk quickly.

But in the end, Seto beer remains an adult version of Kali. Kvass, as the beverage is commonly known internationally, has even become the soft drink of choice in some Baltic countries and in many countries where Russian culture has taken root, motivating Coca-Cola to buy Estonian and Latvian brands to participate in the market. There are lots of variations, but at its core it is always a low-gravity fermented drink made from dark bread and sugar. Seto Õlu attempts to achieve the same aroma and flavor profile as the traditional Kali made in eastern Estonia and western Russia, but at a more virile 4 or 5 percent alcohol by volume. Its deep raisiny perfume (think dried figs and Medjool dates) is akin to an underfermented Abbey Dubbel, or even a root beer without some of its characteristic botanicals—a brew that clearly showcases the aromatic potential of dark rye malts used in generous quantities. 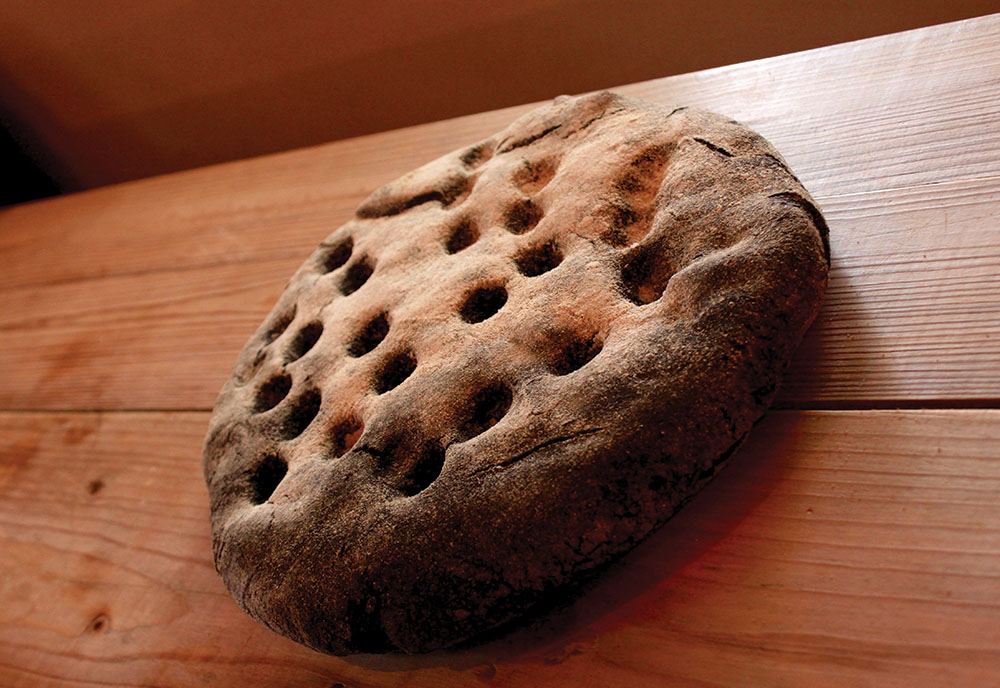 Seto Õlu begins with õlleleib, a dark and dense loaf of rye bread that acts as a dose of specialty malts in an otherwise basic grain bill.

Making Beer the Seto Way
In contrast to most shy Seto brewers, the open-minded Hõrn family of Obinitsa is happy to share brewing stories. Their restaurant, Taarka Tarõ, has a simple sign on the street advertising Seto Süük ni Juuk (Seto food and drinks), only a few steps from a small museum on Seto culture and history. And this historical connection shows in the way they communicate all they can about the meals they serve and the beer they brew. From the warm rye bread to the milky, cold cucumber soup that goes by the appetizing name of ‘mouth glue,’ everything Mother Hõrn cooks pays homage to her family’s Seto heritage. Much like her men’s beer.

Aare, father, and Semmo, son, are both experienced brewers. Semmo himself learned to brew when he was only 10 years old. Although he was definitely too young to drink his own brew, no social stigma forbade him to sell it at local fairs, since he had his father’s blessing.

A boy of 10 can brew Seto Õlu because it’s a fairly simple beer. The main ingredient is that dark rye malt bread made by bakeries like Lõuna Pagarid in the town of Põlva. This loaf is incredibly dense and heavy; clearly different from the delicious rye bread the Seto serve alongside local forest mushrooms, smoked meats, and fish soup. It is also quite flavorful. Needless to say, this õlleleib packs quite a punch in the brew kettle, acting as a potent dose of dark specialty malts would in an otherwise basic grain bill.

Most Seto beer is raw ale as well. Like many other rural beer traditions—think Lithuanian Kaimisˇkas Alus, Finnish Sahti, and Quechuan Chicha—this method proves cheaper for those making the beer, but also renders the beer fragile. The whole batch needs to be consumed in a matter of days to avoid spoilage. This is one of the main reasons the Setos primarily brew for special occasions: family ceremonies, village fairs, and market days. This is also why some of these beers develop a light acidity over time, turning from a sweeter brew into something that bears a resemblance to Oud Bruin, flavor and palate-wise.

The typical modern recipe is deceptively simple: 1 loaf of õlleleib for every 10 liters of water, with an additional 50 grams to 1 kilogram of sugar, depending on the brewer’s taste. Hops, when used at all, are thrown in without much impact on the end result. What matters most is balancing the bready, rye malt flavors with some residual sugars. Baking yeast is used to ferment, but at warmer ale temperatures, which prevents isoamyl acetate, or banana esters, from developing. Thermometer readings, however, are few and far between in these lands. Ain Raal, the champion brewer and avid accordion player from Rikka Ivvani farm, says the sugar is a modern addition to the recipe. In the past, when vessels were still made of wood, Setos used to bake their bread at home. As such, their loaves weren’t as thick and pungent as the current rye malt brick, and provided enough sugar to yield a mild farmhouse brew. Occasionally, they even bought Soviet bread and burned it slightly in the oven. In any case, Raal says a good Seto beer has always been the same: dark, a tad sweet, not very bitter or tart, and rather low alcohol-wise. It should taste like Kali, but with a little bit more oomph in body and flavor.

No one in Setomaa—even the woman first encountered at the Kingdom Day festival—claims their traditional beer is better than any other example, though. And to date, nothing is packaged for distribution, if you discount a few farms like Mardimäe Talu in Hilana, that sometimes bottles its beer in two-liter plastic “growlers” for take away consumption. Russian tourists mostly flock to the area to soak in the relaxing mineral waters of Värska, but they also tend to prefer handsa, the stronger local distilled liquor, and spend their money accordingly.

A National Geographic article that drew attention to the reclusive kingdom last November made no mention of Seto Õlu. Maybe this isn’t surprising. After all, Seto beer culture is hidden within a more prominent culinary heritage, itself caught up in larger political and cultural issues—a proverbial Matryoshka nesting doll concealing its contents to even the most avid Estonian and Russian beer lovers. And for that to change, the Seto will need to bake up a storm. ■ 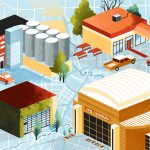 Previous: Where to Drink in Houston, Texas 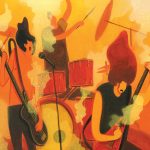