Where to Drink in Tampa, Florida 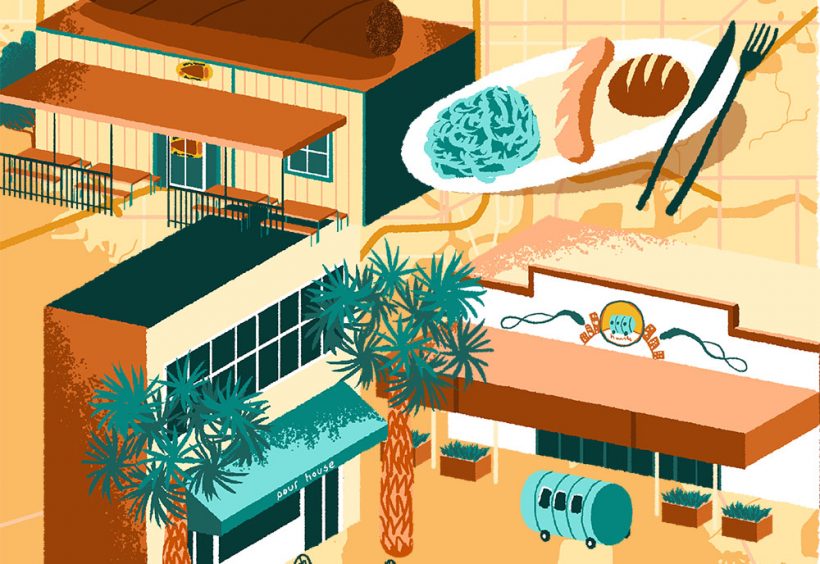 For the past decade, Tampa has been on the leading edge of Florida’s flood of new breweries, a phenomenon that shows no signs of drying up anytime soon. With its deep roots in brewing, Tampa’s current growth is anchored to its reputation as a creative and ever-evolving beer hub where brewers are supported by open-minded chefs and beer enthusiasts.

The first brewery in the city opened in 1897 to serve the factory workers who had emigrated from Cuba, Italy, and Spain for jobs producing cigars and supporting cigar makers. A historic landmark still standing in Tampa’s Ybor City Historic District, Florida Brewing Company operated until (and, covertly, during) Prohibition. After Repeal Day, it rebranded as the Tampa Florida Brewery, Inc., remaining one of the largest brewers in the Southeast until its closure in 1961.

In fact, many local breweries shuttered in the 1960s following the construction of an Anheuser-Busch brewery and, later, an adjacent animal theme park and garden that would weave itself into local history. While the A-B brewery closed in 1995 and Busch Gardens is no longer run by the mega-brewer, Tampa’s Busch Boulevard still bears witness to the influence the company has had on the city.

The growth of small breweries in Tampa was slow at first, hindered by archaic laws. But a passionate group of homebrewers paved the way for the city’s eventual beer explosion. Tampa’s first brewpub grew out of a homebrew supply store called The Brew Shack, which eventually morphed into Tampa Bay Brewing Company in 1995. At the Ybor City brewpub, try one of chef John Boyle’s beer and food pairings, like Old Elephant Foot IPA, Iron Rat Stout, or Reef Donkey Pale Ale with The Bomb! (a bacon burger wrapped in pizza dough) or Moosekiller Meatloaf with Barleywine sauce. TBBC opened a second production facility and brewpub in the Westchase area of Tampa in 2015.

Tampa’s first production brewery Cigar City Brewing, which began making beer in 2009, greets flyers at the gates of Tampa International Airport, where it operates a small brewery in the Airside C Terminal. Near the airport in West Tampa, the production facility operates around the clock while the tasting room buzzes with revelers drinking core beers like Invasion Pale Ale, treatments like Strawberry Jalapeño Jai Alai IPA, and limited bottles like Raspberry Halo Imperial Stout. On the third Sunday of each month at Cigar City, LoKo Cuisine hosts Eggs and Kegs, a multi-course beer-infused brunch paired with a pint. Look for more LoKo-hosted pop-up events at other breweries around town.

Today, the greater Tampa Bay area is home to over 50 breweries, with many options in central Tampa. Coppertail Brewing Co., in the Ybor neighborhood, is known for its hoppy beers like Free Dive IPA and Brews Banner Double IPA, while to the north in Seminole Heights, Angry Chair Brewing attracts extreme beer fans with ales like German Chocolate Cupcake Stout and Two Pump Chump, a hazelnut coffee Porter. 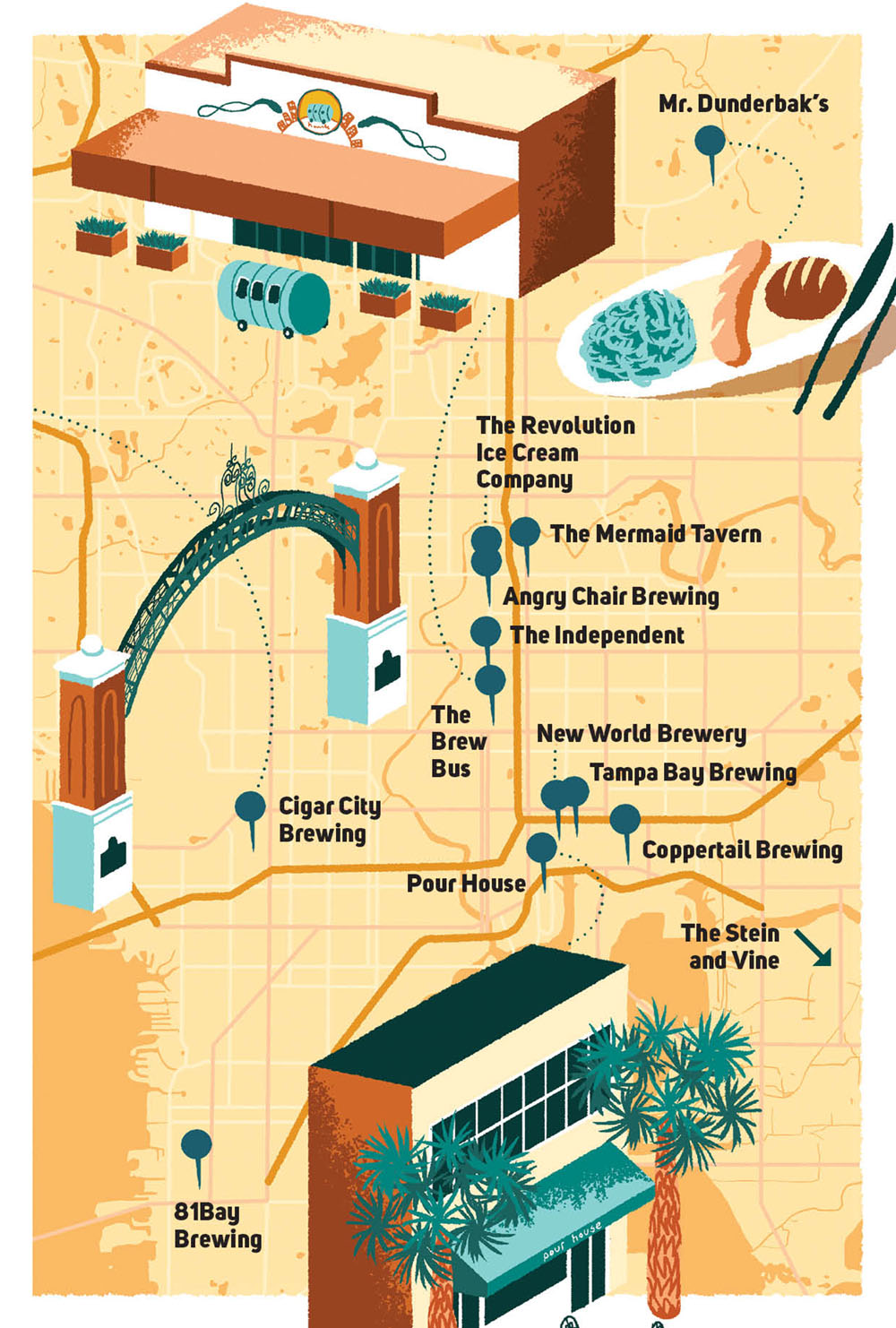 In an unassuming storefront in Brandon, The Stein and Vine owner Ty Mathis and his wife Lacey craft a different menu almost every day of the week, from bourbon barrel-aged beer battered fish tacos to Stout onion soup. And the Volcano Burger, stuffed with blue cheese, Sriracha, and jalapenos, leaves fans sweating and crying before coming back for another bite. On tap, expect local representation plus limited releases like The Bruery’s anniversary ales or Cabotage, an Imperial Porter collaboration between South Florida’s Funky Buddha and Delaware’s Dogfish Head.

To the north in Tampa Palms, Mr. Dunderbak’s Restaurant and Brewery serves up German food with an inspired beer selection. Dunderbrau, a 2.5-barrel brewery, was added in 2016. Dunderbak’s is known for being home to the area’s oldest homebrew club, Tampa Bay BEERS, and for attracting visits from well-known brewers, like Rodenbach’s Rudi Ghequire. Drafts like Kulmbacher Eisbock or Reichenbrand Döllnitzer Ritterguts Gose go down easy with spätzle, kraut, and wurst in the beer hall.

The Independent in Seminole Heights emphasizes both Belgian and American styles with 14 taps and 160 bottles. Grab a glass of local Six Ten Brewing’s Horchata Oatmeal Milk Stout and enjoy it with a Cuban sandwich in the year-round beer garden.

Even the ice cream is made with beer in Seminole Heights. The Revolution Ice Cream Company’s [revicecream.com] first location in Brandon and newest location in The Heights sometimes surprise patrons with “adult” flavors made from local beers like Cigar City’s Hunahpu’s Imperial Stout.

Among Tampa’s longstanding classic restaurants is New World Brewery, currently in Ybor City. While they no longer brew beer here, the restaurant maintains its reputation with stone-baked pizza, barbecue, and a stage that has hosted bands like My Morning Jacket and Animal Collective before they struck it big. Floridians come here for the lunchtime barbecue buffets, but an artichoke, smoked chicken, and feta pizza along with Cigar City Maduro Brown Ale or Big Top Hawaiian Lion coconut and coffee Porter isn’t a bad idea, either.

Anchored near Union Station and the Port of Tampa is the stalwart Pour House, open since 2010. A short drive from some of Tampa’s finest beer makers, Pour House’s list of 38 taps includes national offerings like Avery’s Maharaja Double IPA and local options like Deja Moo Milk Stout from Hidden Springs Ale Works a short distance away, or Mango Wit from Tallahassee’s Proof Brewing. ■ 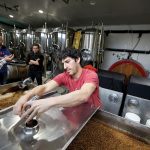 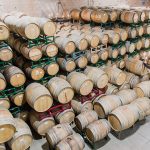