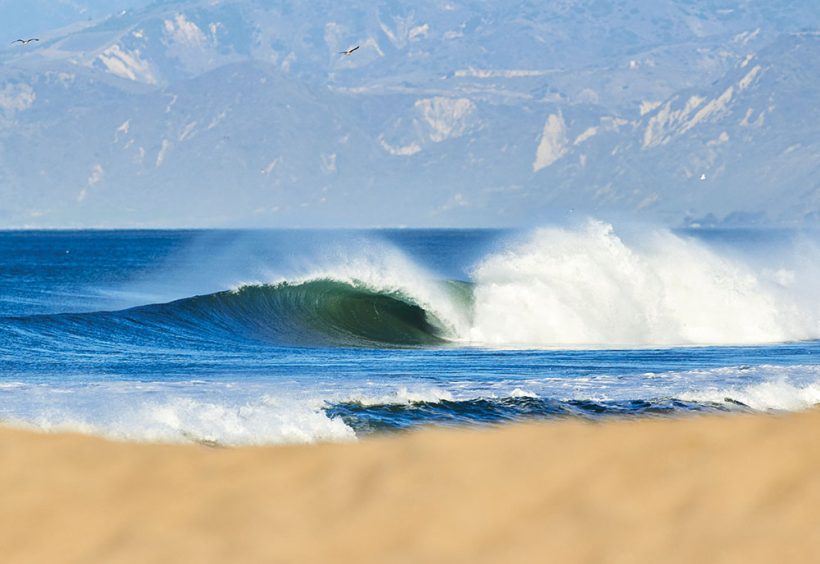 No surfer wants to sit in a bar and drink beneath a commercially made surfboard stamped with the logo of an industrial brewer. First off, the specs are usually all wrong: the board is disproportionally shaped, and the rocker—the curvature in the board that allows a rider to drop into waves without nose-diving—is nonexistent. The board hangs there reeking of exploitation. And from Brooklyn to the Bay Area, surf bars are often far from the swell and equally likely to overdo the theme, resulting in a place that feels manufactured.

In recent years, however, a number of surf-inspired breweries and brewpubs have popped up around the country. While these brewers labor to produce quality beers, the surrounding surf culture inevitably bleeds into their work, influencing taproom design, marketing campaigns, company ethos, and the beers themselves. 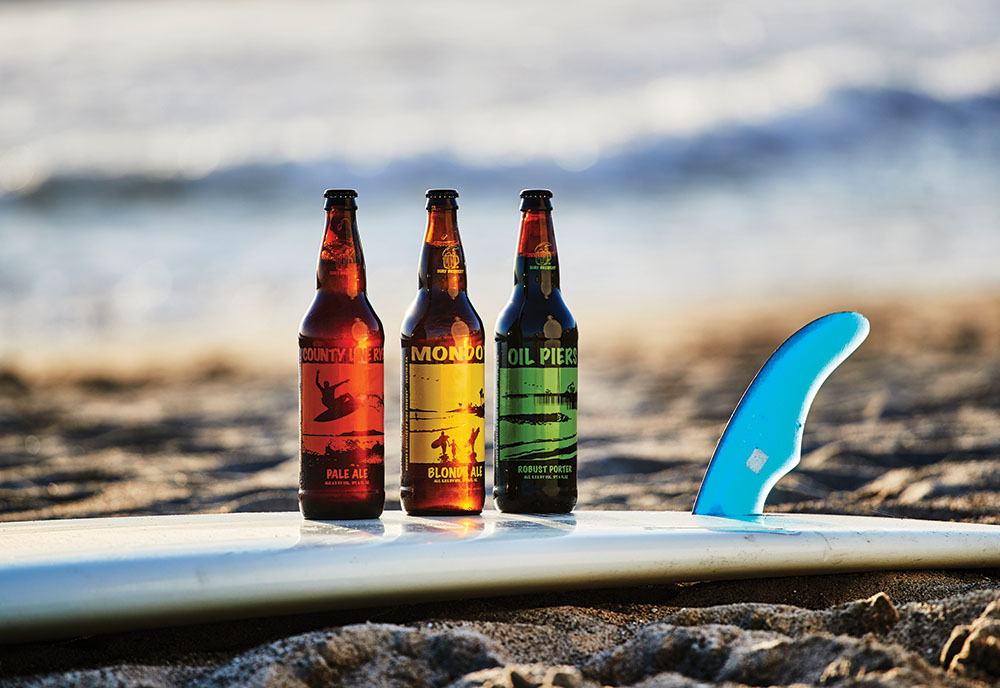 Ventura is important to California surf history: The city hosted the state’s first professional surf contest in 1965 and Tom Morey—inventor of the Boogie board—shaped surfboards here, too. But at the turn of the millennium, long-time surfer and homebrewer Bill Riegler noticed that among a population of 1 million people, Ventura had no commercial breweries. So in 2011, he corrected that by co-founding Surf Brewery 10 minutes from Surfer’s Point Beach.

The tasting room is a museum to Ventura’s surf history. More than a dozen boards from the ’50s, ’60s, and ’70s adorn the walls and many of the beer names use surfing vernacular. Foam Board Cherry Tart is an entry-level kettle sour named after the neophyte’s ride. Some of the beers are even a testament to extinct waves. Oil Piers nitro Porter, for instance, was named after a prime spot north of town where locals surfed and partied during the second half of the 20th century. But in 1998, the oil rigs were ripped out, the contours of the ocean floor changed, and the waves stopped breaking.

In order to prevent erosion at another top break, Surfer’s Point, and to avoid having to make a beer for another lost wave, Surf Brewery has donated more than $35,000 to the Surfrider Foundation, a nonprofit organization dedicated to protecting waves and beaches worldwide. 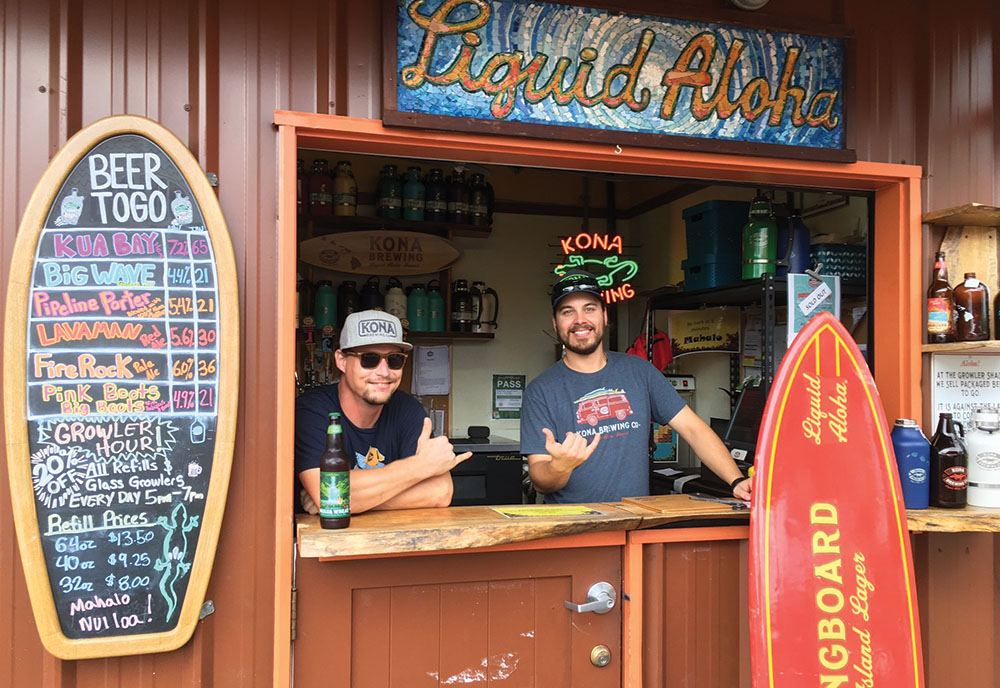 Several beers are named for Hawaii’s world-class breaks—Hanalei IPA, Pipeline Porter, Wailua Wheat—and the brewery’s open-air and palm-tree-filled restaurant looks like a scene out of the 1966 film The Endless Summer. The parking lot, typically occupied by dozens of cars stacked with boards, could be any beach lot on a day with good swell, while the growler station resembles an old oceanside board rental shack.

For surfers, getting to the brewery is easy: it’s about a half mile from a good wave, or they can hop the free, city-run trolley, which passes all the local surf spots before dropping off those who need a drink.

“We celebrate a lifestyle and values that many surfers have,” Sargis explains, which he says extends beyond sharing a wave and a beer. Kona Brewing is also focused on sustaining the environment, supplying farmers with spent grain and the restaurant’s food waste to reuse as cattle and pig feed, respectively. Meanwhile, the staff—more than half of whom surf—pitches in for beach clean up projects, and in the last two years, the brewery has donated more than $20,000 to the Surfrider Foundation.

And when it’s not protecting the oceans, Kona sponsors many of the islands’ surf competitions, as well as a few professional and local surfers, who serve as brand ambassadors. 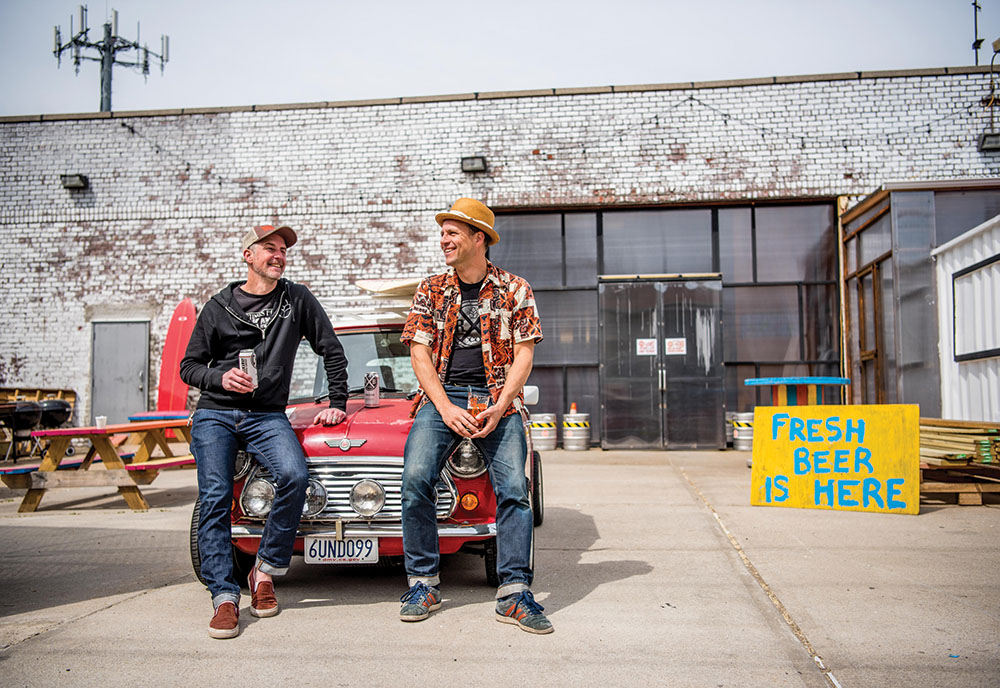 The A Train is one of the only places in New York City where you can spot salt-crusted surfers juxtaposed with the grit of a subway car. And as the founders of Rockaway Brewing note on their website, they started homebrewing in Far Rockaway “mainly so we’d have something to sip on after a day of surfing.”

When their recipes took off, so did founders Marcus Burnett and Ethan Long, moving operations away from the surf to Northern Queens, where the brewery’s name became slightly misleading. Last summer, however, the company returned to its roots, opening its second tasting room on 72nd Street in the Rockaways.

On a summer day, you’ll find a few dozen bikes parked outside the tasting room. Since it’s only five blocks from the beach (and a pair of surf schools), surfboards belonging to patrons lean against the wall. But Burnett has always been skeptical of too much crossover between the two worlds he loves.

“It’s New York City. It’s urban beach culture,” he says when asked about the interior design for the newer tasting room. “It’s not quite as beachy.”

Still, Rockaway Brewing isn’t avoiding the natural parallels between beers and beach. The company’s first foray into beach-themed beers came last year when it introduced DaBeach, a wheat IPA. Moving forward, the plan for the summer is to start brewing beers that customers want to drink seaside, like Kölsch and Pilsner. Burnett’s aim is to “brew beers for people who want to still be active after they drink beer and not get knocked out.” 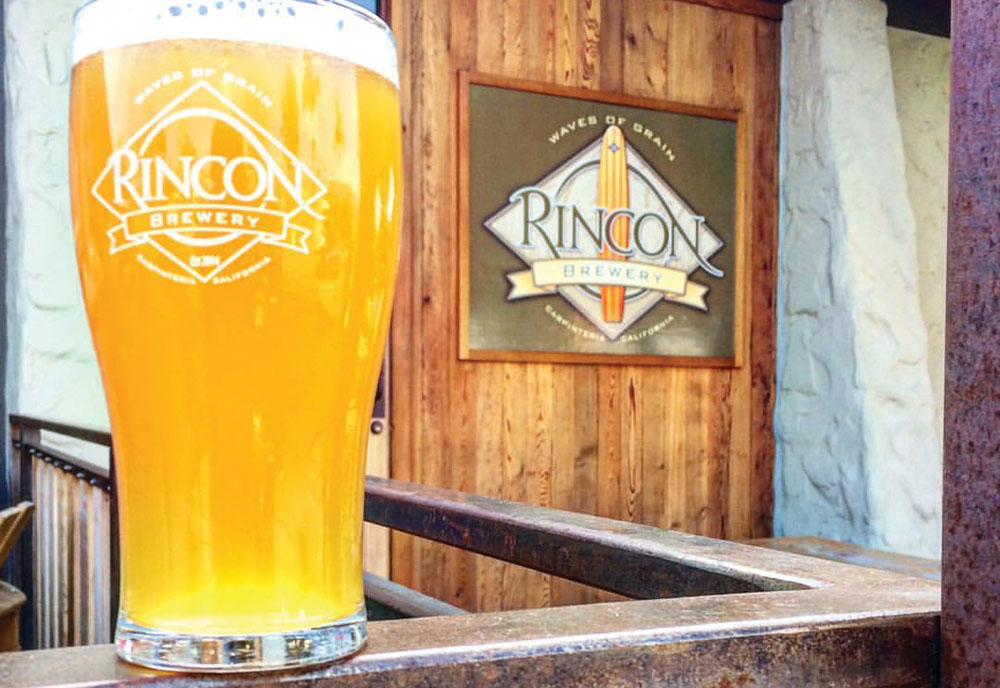 California’s Rincon Point is one of the most lauded surf spots on the West Coast. Like a lineup of distinct beer taps at a bar, Rincon’s break offers nuances and choices, too. The Rincon Brewery, a brewpub just 2 miles from the waves, does much to honor the area and its connection to the ocean.

Bates Blonde, an entry-level beer, is named for the freeway exit that brings surfers of all levels here. But only the most experienced wave riders paddle for the famed wave Indicator, a difficult spot that lends its reputation to the brewery’s bold American IPA. Rivermouth Stout is named for the river mouth section of the break. (There’s no Cove beer, as of yet, which is what locals call Rincon’s third and final section.)

Beyond the beers, the brewery is a natural gathering point for the town’s surf community. Local pros and team riders for Channel Islands—one of the premiere names in surfboards and a nearby manufacturer—are regular fixtures at the bar, which resembles a classic balsa wood longboard.

“It’s a small, tight-knit community,” says head brewer Shaun Crowley, “and everyone always filters in for that after-surf beer.”

When a big swell is set to hit, residents don’t even have to read the surf reports. They need only sit at the bar and watch the bartenders—most of whom are good enough to compete in the pro division—fly into a frenzy as they attempt to trade shifts. Fortunately they have an understanding boss. “We can start a little bit later for some dawn patrol [surfing],” Crowley says. 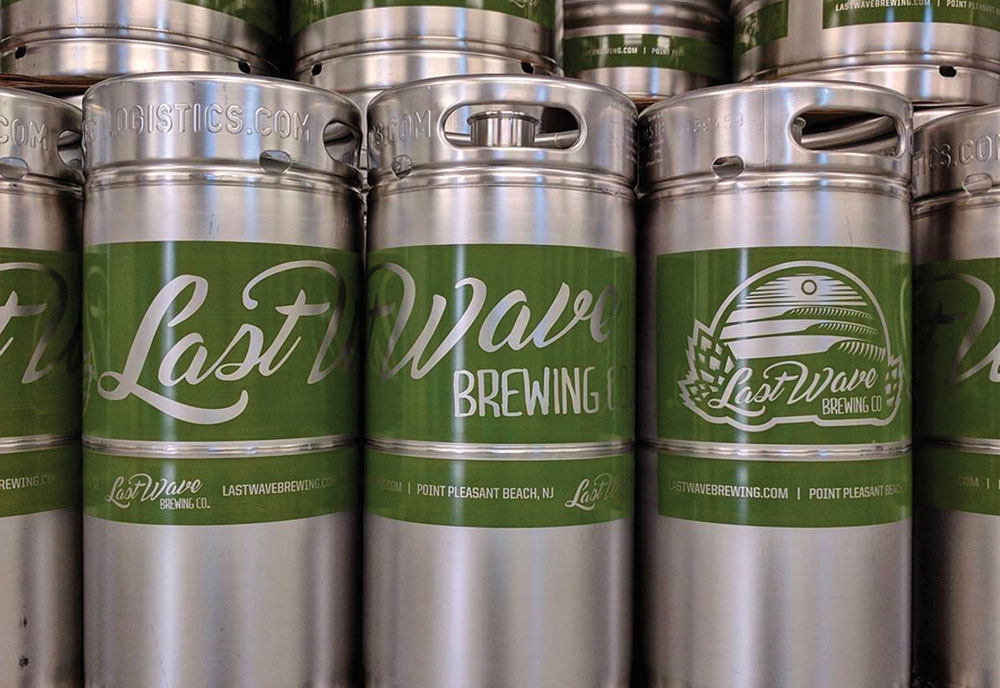 When Last Wave Brewing Company founders Bert Roling and Nick Jiorle started surfing together on Long Beach Island during their senior year of high school, the two would retire to a little garage behind Nick’s grandmother’s house between sessions. There, they’d hang out and talk about their shared passions—waves and homebrewing.

Located in the heart of Point Pleasant, N.J., just a few blocks from the same beach, Last Wave opened Memorial Day weekend. Modeled after that garage, the partners plan to hang local surfboard art, install televisions to screen surf documentaries, and put up broken boards in their new tasting room. They also intend to host local Surfrider meetings and lift the spirits of broken-hearted surfers with wrecked boards by offering a free pint.

“It’s still New Jersey,” Jiorle warns when describing his vision for the space. “So not cheesy with palm trees and bamboo.”

Most of the beers on tap have names derived from the subtle argot of the surf world: Green Room IPA (for New Jersey’s green-tinted barrels), 5/4 Chocolate Coffee Stout (for the thickness—in millimeters—of a standard wintertime wetsuit), or Flatspell Wit (for the typical conditions during a New Jersey summer). “Surfing is about storytelling,” Jiorle says. “And so is drinking beer.”

Thus, Last Wave plans to be the setting for gatherings of friends old and new—a place where raconteurs with a thirst for good beer and the next paddle-out can congregate. 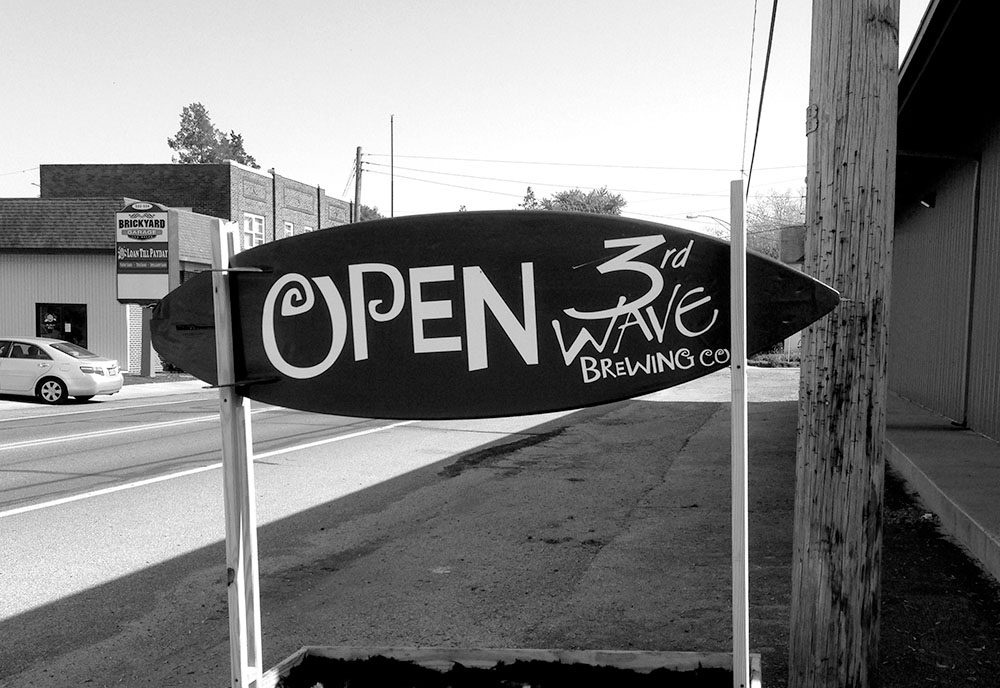 Delaware’s 3rd Wave Brewing is named after what is typically the best wave in the set. Its surf-themed line-up pays homage to the sport that co-owner Lori Clough has always loved, with beer names taking cues from Australian parlance (Bombora Double IPA; a bombora is a giant wave breaking over a shallow reef offshore) and questionable puns (ShoreThing Amber Crab: an Amber brewed with Maryland crab spices).

While Clough claims that she and her business partner are just “pretty good wannabe surfers,” 3rd Wave brings both the sport of surfing and local surf history to the community. This year, the company co-sponsored a surfing event that helped disabled and autistic children ride, and with the release of its SunDancer White IPA, 3rd Wave waxed lyrical about Sundancer, the former surf shop once-beloved by residents of Ocean City, Md. With the beer, they brought back the logo and the name.

Although the brewery is 35 miles from the ocean—3rd Wave can’t afford beach real estate, Clough explains—they are still a draw for surfers commuting from Baltimore and DC to Delaware and Maryland’s shores. The tasting room, filled with surf memorabilia and fiberglass boards shaped locally, even if far from the surf and sand, attempts to hold true to its motto: “Good Friends, Good Waves, and Great Beer.” 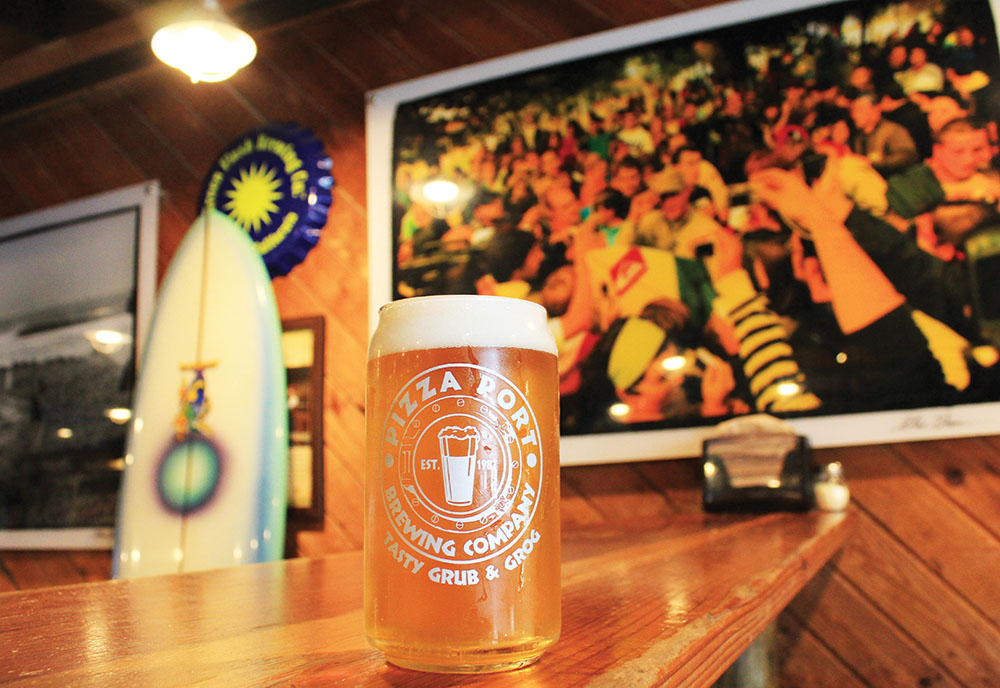 What began in 1987 as a pizza joint in Solana Beach became a brewpub a few years later when its co-founders—a brother and sister who both surfed—started making beer.

Today, Pizza Port has five locations in Southern California, four of which are in beach towns near some of the region’s best waves. As much as beer has taken over Pizza Port, so too has surf culture. Two of Pizza Port’s brewers are well-known, local surfboard shapers, and numerous beers are named for surf spots (Swami’s IPA), surf follies (Party Wave Amber Lager), and surf slang (Kook Double IPA; a kook is a pejorative term for someone trying hard to look like a surfer).

Pizza Port also commissions local surfboard artists and surf photographers to create the artwork for the brewpub’s cans and labels. In addition, the brewery sponsors surf events and local professional riders, and has collaborated with surf companies like Super Brand, making the board business a beer called Super Kölsch in exchange for Pizza Port branded surfboards. Over the years, these brewpubs have become the quintessential places to grab a beer and a pie post-wave. 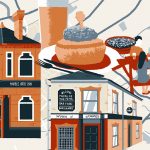 Previous: Where to Drink in Manchester, England 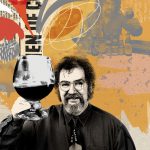