Kegs and Eggs: Across the Country, Breweries Add Brunch 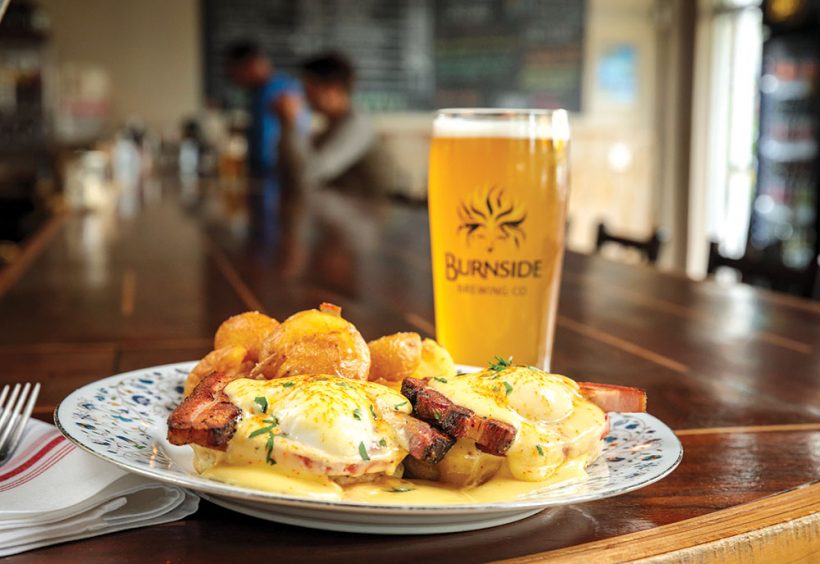 For those who take their beer and food pairings seriously, it’s difficult to imagine beer without cheese or another preserved, salted, or cured item. They seem meant to be. It’s strange, then, that your typical brunch items, so often prepared with ingredients begging to be cut with a fine ale or lager, are often overlooked by sophisticated drinkers and foodies when reciting revelatory food and drink combinations.

Things are changing, though. Taking a note from the typically advanced playbooks of their European contemporaries, more American breweries are starting to open for weekend brunch, with drinkers opting to pair farmhouse ale mimosas with egg sandwiches on locally made bread, with bacon from nearby farms, and sustainably grown arugula.

In brunch-crazed Portland, Ore., Burnside Brewing Company has led the beer and brunch movement since adding a sweet and savory weekend menu a year ago. And its move has prompted other Portland breweries like The Commons, Lompoc, and Ex Novo to take a crack at poached eggs and beer syrup-drizzled pork belly, too. Elsewhere around the country, Manayunk Brewing Company in Pennsylvania offers a prix fixe brunch with waffle and omelet stations and cedar plank salmon. At Ohio’s Lineage Brewing, the weekend brunch menu includes a vegan spring frittata and a blueberry bacon French toast casserole. And in January, California’s Evans Brewing debuted a morning menu with options like a breakfast burrito and biscuits and gravy. 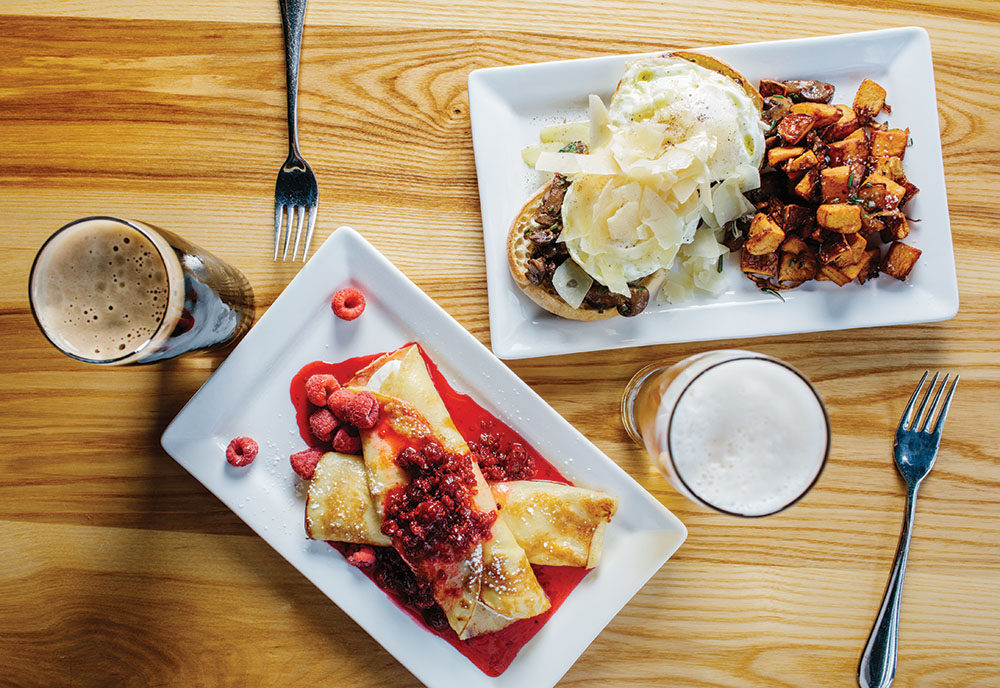 Good City Brewing’s Mushroom, Truffle, and English Toast plate with a Pilsner, and raspberry crepes with its Detail Porter. | Photo by Matt Haas

After attending a brunch at a local account that featured Burnside’s beers, co-owners Jason McAdam and Jay Gilbert decided to give it a try. “Since our inception, we didn’t understand why breweries—including those we’d worked for in the past—didn’t take more pride in their food programs,” Gilbert says. “We’ve taken an approach to hire talented folks both in the brewery and in the kitchen and let them create.”

One of those people is chef Richard Watts, who counts chefs from Italy, Nepal, and Oaxaca among his influences. “Brunch is more demanding,” Watts says. Eggs are the hardest thing to cook right, and brunch guests let you know if it’s wrong.”

Brewmaster McAdam says pairing beer with brunch items isn’t really different than any other meal. “You are looking to pair with sweet, spicy, savory, and so on; all of these are flavors that are found in brunch items. When we pair beers with food, we are looking for similar components between the beer and the food item, whether it’s spicy or sweet. Typically, for savory dishes I tend go with a stronger yeast profile or a relatively hoppy beer,” he adds, noting that Burnside brunch goers prefer more savory dishes.

And the brewery has a trick up its sleeve with Sweet Heat, an award-winning wheat ale brewed with apricots and Scotch Bonnet chilies that’s modeled after Caribbean salsa. According to Watts, it’s incredibly versatile. “Our eggs Benedict stands out because we use our buttermilk biscuits and hollandaise made with our Sweet Heat hot sauce. A Sweet Heat michelada is perfect with the pork belly Benedict.”

In Milwaukee, Good City Brewing has always seen its kitchen and food as a key differentiator that sets it apart from other breweries, and the menu has been carefully chosen for how well it pairs with the 12 beers on tap. It started serving brunch last November. “Milwaukee is a brunch town, so it only made sense to provide consumers with a brewery brunch option,” says co-founder David Dupee.

“I try to look at the overall menu being well paired with beer rather than individual dishes with specific beers,” adds chef Guy Davies.

Good City’s brunch menu is divided between savory brunch plates, hearty sandwiches, and indulgent sweet options that often involve ice cream from local creamery Sassy Cow. “Our go-to brunch beer here is our Motto Mosaic Pale Ale … the fruit notes from the Mosaic hops really help to refresh your palate,” suggests Davies. But with a sweeter dish, he recommends the Porter. “A favorite pairing off our menu is our Detail Porter with our raspberry crepes. We find that the sweetness from the crepes really opens and showcases the toasty malt characteristics of a Porter.”

With more filling menu items like the Aussie Breakfast Burger—topped with aged cheddar, beets, grilled pineapple, and a fried egg—Davies likes a beer that can cut the heaviness. ‘We think crisp and bright ales pair well with brunch for the same reason that champagne has become a classic brunch pairing,” he adds.

But you won’t find champagne on Good City’s brunch cocktail menu. Even though it’s a staple elsewhere in Milwaukee, the brewery’s state license only allows it to serve beer. So the brewing team got creative. “Our beer cocktails—designed by co-founder and brewmaster Andy Jones—[are] the brunch menu items where we play around with our beer the most,”
says Davies.

As for the chef’s personal favorite brunch pairing? It’s the Mushroom, Truffle, and English Toast plate. “I love the simple and earthy flavors of the mushrooms, egg yolk, Parmesan cheese, and truffle pairing so well with the malt-forward profile of our Good City Pilsner or Counterpoint pale lager, both great brunch beers.”

Beer has been shown to aid in digestion, lower cholesterol, and prevent blood clots, all welcome attributes after finishing a double stack of buttery flapjacks. It also complements sweet and savory dishes equally well. In other words, don’t forget beer with the meal we like to refer to as the most important one of the day. 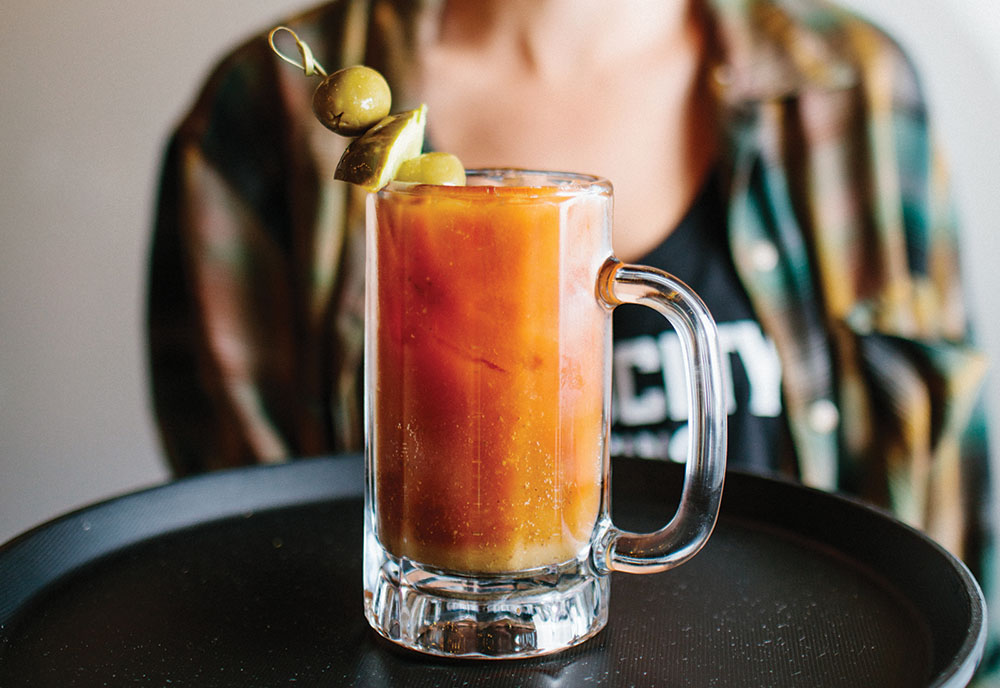 Unable to obtain a liquor license along with its brewpub license, Good City Brewing was forced to get creative with its cocktails. So, in a brunching town where drinks like bloody marys, mimosas, and mojitos are staples, brewmaster Andy Jones set out to design an artful version of each without using any spirits, just beer. Here’s his Beery Mary recipe.

Mix ingredients together. Store in a sealed container in the fridge. Will keep for several weeks if refrigerated. 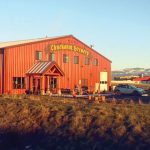 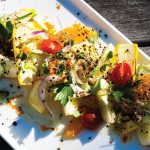