Where to Drink in Nashville, Tennessee 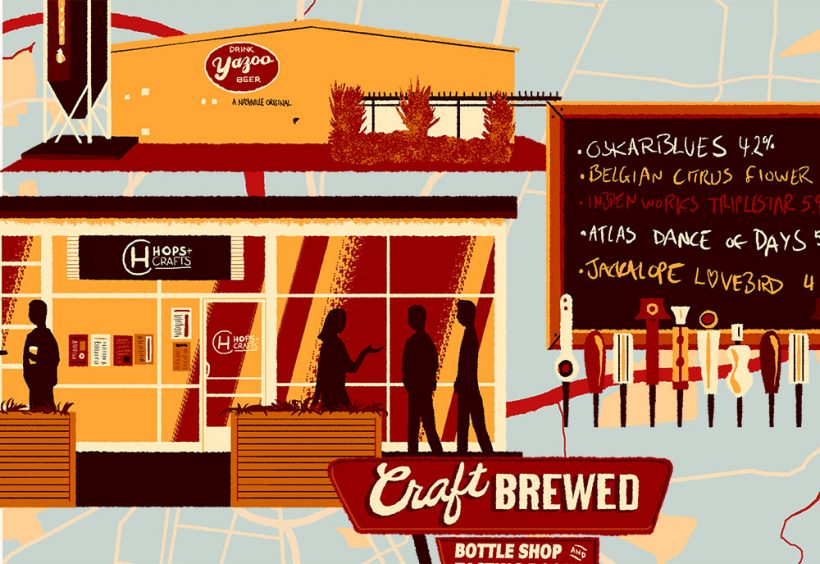 When Kent Taylor opened Blackstone Brewing Company on New Year’s Eve of 1994, Nashville locals were less than impressed with the new brewpub. “This was Bud country,” Taylor says. “There was a complete lack of knowledge that beer could be anything other than yellow and fizzy—people would get up and walk out.” But over 20 years later, the Nashville beer scene has exploded, featuring around 20 local breweries and an ever-increasing number of beer bars and bottle shops.

Before Prohibition, Nashville had a healthy brewing industry fueled by German immigrants who arrived during the second half of the 19th century. Early breweries included Stifel & Pfeiffer and the Nashville Brewing Company, which was bought by Cincinnati’s Christian Moerlein and William Gerst in 1890. Gerst bought out Moerlein’s share three years later, and the William Gerst Brewing Company continued to operate until 1954.

For the next 40 years, local brewing lay dormant until brewpubs were legalized in 1993, several of which (including Blackstone, Boscos, and Big River Grille) opened soon thereafter and began to reacclimate the city’s taste buds to flavorful beer. In 2003, Linus and Lila Hall opened Yazoo Brewing Company, which continues to be a major player in the local beer scene. To the east, in Sparta, Calfkiller Brewing Company opened in 2009, and several new breweries have opened every year since.

Nashville brewers were limited by a 6.2 percent ABV cap until Jan. 1, 2017, when a law went into effect allowing them to brew and serve beers of up to 10.1 percent ABV without a distiller’s license. The law also allows stores to sell high-gravity beers alongside lower-alcohol products. Now that reason has been restored, Tennessee brewers can pursue a wider range of styles, and drinkers can more easily find popular beers with higher alcohol contents from across the country.

Since the New York Times declared Nashville an “it” city in 2013, tourists have flocked to the city—so it’s more likely than ever that even those who can’t tell country from bluegrass (and can’t stand either) might end up in Music City for a weekend. Here’s a beer lover’s guide to enjoying the best that Nashville has to offer. 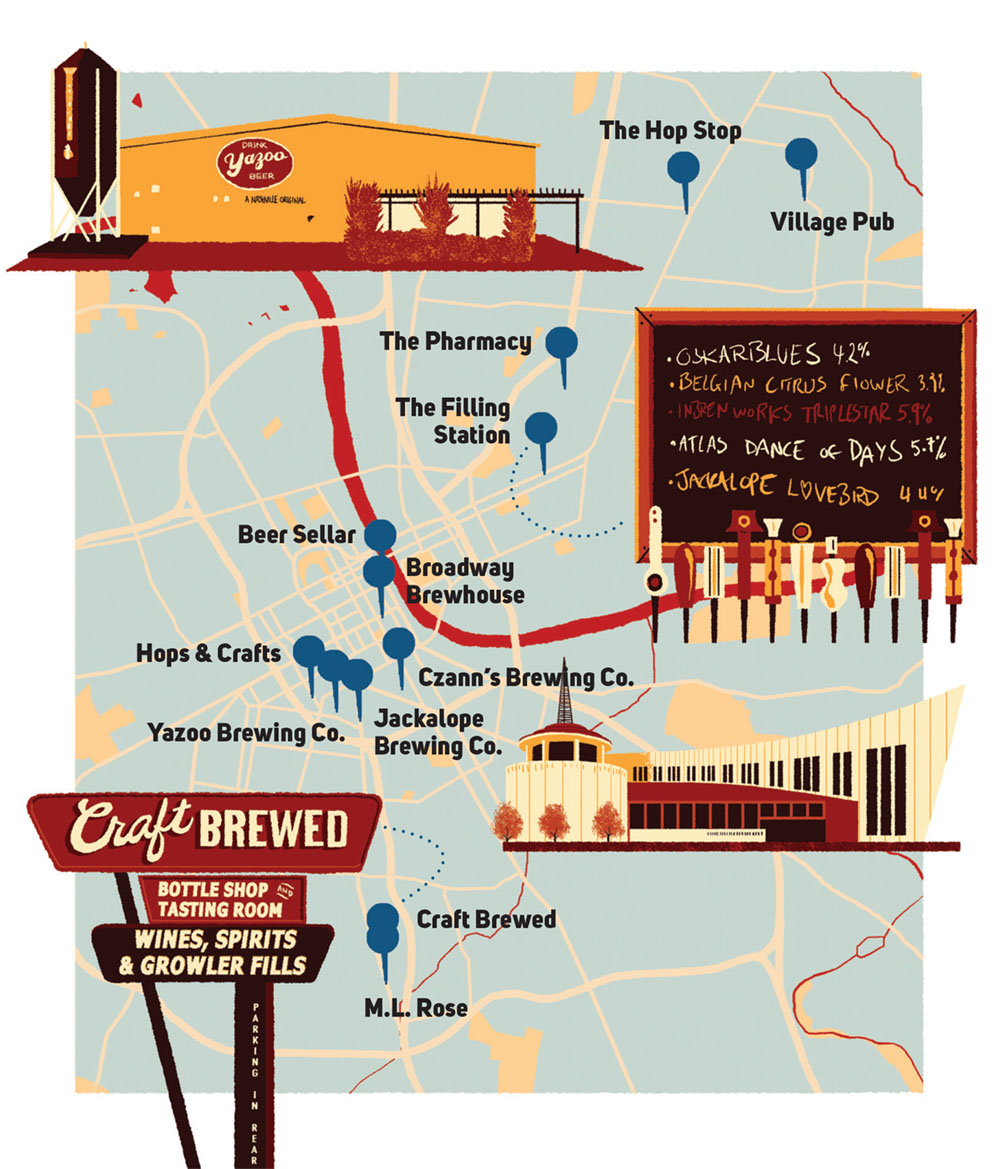 Within walking distance of many downtown events, like a Nashville Predators hockey game or a concert at the Ryman Auditorium, the Broadway Brewhouse offers 72 drafts, including a good selection of regional beers, and a menu with sandwiches as well as Mexican and Cajun dishes. Take a seat by the front windows to enjoy the breeze and watch the tourists stroll by in their cowboy boots and jean shorts.

A short walk to the north, the Beer Sellar is located in a basement beneath Church Street. Around half of its 52 taps are rotated regularly, and feature local beers like Tennessee Brew Works Cutaway IPA and Memphis-based Wiseacre Coffee Milk Stout. Known for its hot beef sandwiches, this bar has a comfy, basement vibe, although purists may dislike the fact that smoking is allowed.

Close to downtown in the Gulch area, Hops & Crafts has 36 taps and serves pints and growlers. The small menu features pizzas and Nashville-made Daddy Bob’s small-batch pimento cheese. With a patio and a few tables inside, this spot is a great escape in the middle of a busy area. Just across the street is legendary bluegrass venue the Station Inn; Yazoo, Jackalope Brewing Company, and Czann’s Brewing Company taprooms are nearby, too.

For a more neighborhood feel, head across the Cumberland River to East Nashville and the Village Pub and Beer Garden [riversidevillagepub.com], which is located in an old house, complete with fireplace and a wraparound porch. Village Pub specializes in local beers and carries selections from East Nashville’s Smith & Lentz, as well as Bearded Iris Brewing and Black Abbey Brewing. Come from 4 – 6 p.m. on weeknights for half price drafts. If you’re hungry, try a signature stuffed pretzel sandwich or a chicken salad.

Located nearby on Gallatin Pike, East Nashville’s main drag, The Hop Stop has 36 rotating taps that are split between local, regional, and imported beers. The bottle list features Belgian imports, and a selection from several local breweries, including Blackberry Farm and Blackstone. Hop Stop is also known for its hot dogs, including an authentic Chicago dog with all seven toppings.

Also on the east side, those in the know flock to The Pharmacy Burger Parlor and Beer Garden for its immensely popular German-style beer garden and German and Belgian bottles, as well as 12 taps, two of which are dedicated to Reissdorf Kölsch and Blanche de Bruxelles. You can also find domestic and local options, including selections from East Nashville’s Little Harpeth Brewing, a lager specialist. Plus, The Pharmacy also makes its own craft sodas (yes, sodas), and offers a selection of bratwurst and creative Tennessee beef burgers, like the Stroganoff, topped with a mushroom stroganoff béchamel, sour cream, caramelized onions, and Swiss cheese.

Grab a growler or enjoy a pint at The Filling Station, home to 40 rotating taps and a knowledgeable staff. Local choices include Calfkiller’s Grassroots APA and Jackalope’s Rompo Red Rye Ale. If the small seating area is full, eat dinner at Edley’s Bar B Que next door and fill up a growler for the road. A second location in the 12South neighborhood has two dozen taps.

Moving to the south side, it’s hard to beat Craft Brewed, which has a small taproom including front and side patios and a cozy beer garden with a fire pit for enjoying a pint outdoors, along with growler and Crowler fills to take home. In the retail shop, find a wide selection of bottles and cans, which can be purchased individually for a mix-and-match sampler. Taps rotate frequently, with selections like Southern Grist’s Tropical Train Ride Gose made in Nashville, Turtle Anarchy Brewing’s Portly Stout from Franklin, Tenn., and Nashville-based Tennessee Brew Works’ 1927 IPA. A knowledgeable and passionate staff completes the overall experience. 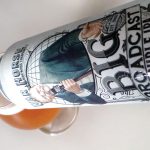 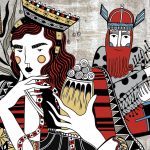