Where to Drink in Belfast, Northern Ireland 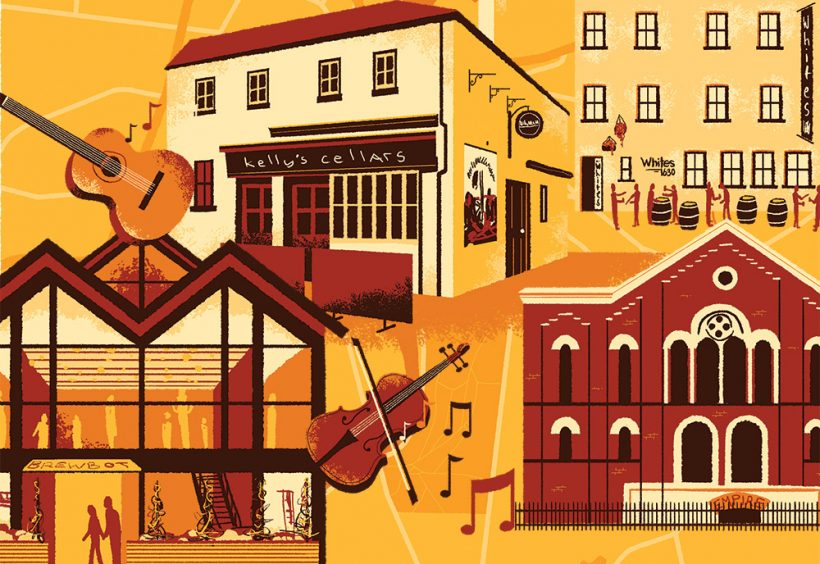 When it comes to beer, Northern Ireland’s capital city embraces both tradition and innovation, with centuries-old pubs alongside boundary-pushing young microbreweries.

As a bustling industrial port town built around the shipbuilding trade and the importing and exporting of goods like linen, Belfast was home to larger commercial breweries as early as the mid 1800s. The city’s modern beer history begins in 1981, when Hilden Brewing Co. opened on the former estate of linen baron William Barbour. Located 5 miles outside of Belfast, it bills itself as Ireland’s oldest independent brewery, north or south of the border, and is known for beers like its Belfast Blonde Pale Ale and Hilden Irish Stout.

Next came Whitewater Brewery, formed in 1996 on a family farm in County Down. In June 2017, it revealed a state-of-the-art expansion where it now produces classics like its Belfast Lager and new favorites like Maggie’s Leap IPA at larger volumes. And then in 2014, with the opening of Hercules Brewing, known for its Yardsman Lager, the craft brewing movement really began to heat up.

Today, according to Roy Willighan of Northern Ireland beer blog Quare Swally, there are 22 independent breweries at work here, plus 10 more contract businesses and brewpubs, up from just four independents in 2011. An astounding 12 breweries opened in 2015 alone.

With a population of 1.8 million, a strong market for locally produced beer exists in Northern Ireland, but upstart brewers are up against antiquated laws prohibiting them from selling their products at the source, online, or at events such as farmers markets. And because of licensing restrictions and a political stalemate in Northern Ireland, the Republic of Ireland still has the upper hand in marketing beer, says Clive Talbot, chairperson for Northern Ireland’s Campaign for Real Ale.

So, despite the growing number of independent breweries, tap lines at many local pubs (including some of those listed below), remain dominated by heavyweight corporations like Tennent’s and Diageo.

Slowly, though, things are beginning to change in Belfast. Upstarts like Mourne Mountains Brewery, which makes an IPA inspired by American hop profiles, and Boundary Brewing, a co-op that dabbles in extreme ingredients and mixed-fermentations, continue to push the industry forward. The city’s emerging beer scene is worth seeking out, if you know where to look. 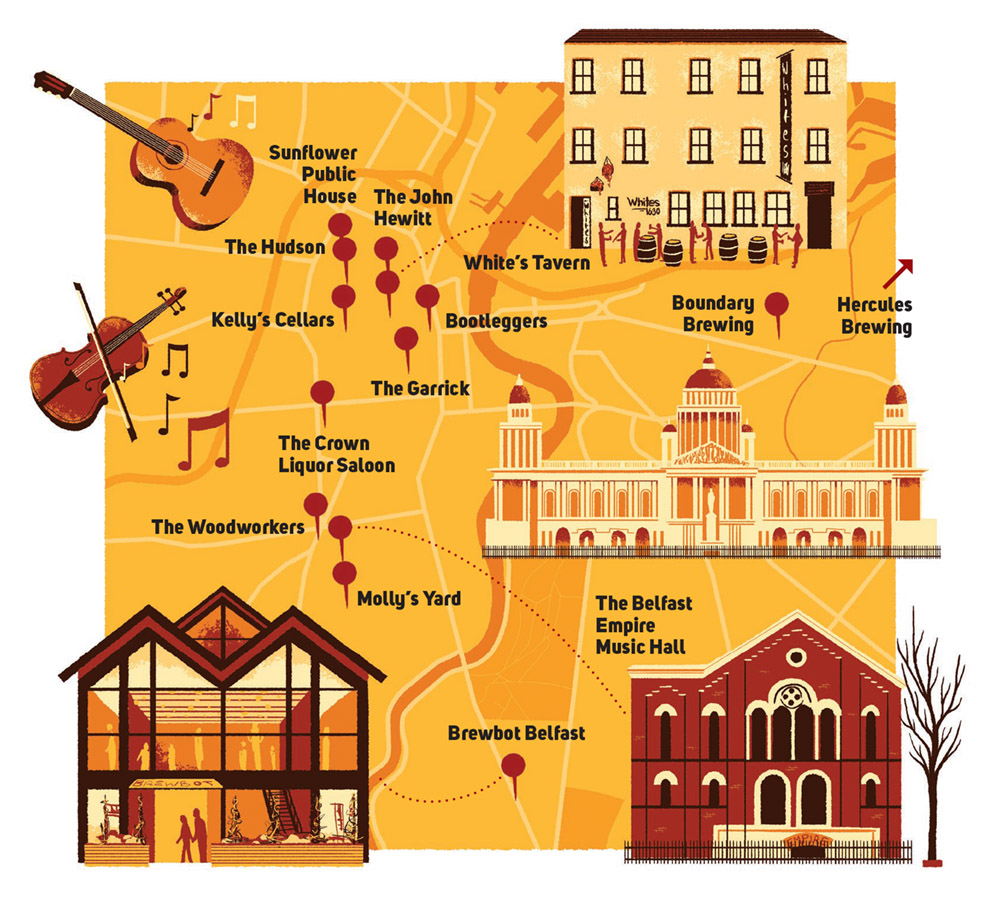 A tour of Belfast pubs begins at Molly’s Yard, a restaurant operated by Hilden Brewing near Queen’s University. To eat, go with the goat, either in meatballs or loin, made with coriander, cumin, a little curry powder, and salt and pepper. Wash it down with Headless Dog, the brewery’s cask-conditioned Amber Ale.

From there, walk to The Belfast Empire Music Hall. Built into a converted church, this renowned venue hosts music and comedy acts nightly. There isn’t a lot of local beer going, but you can get a Foxes Rock Pale Ale, brewed by Station Works Brewery in Newry (which was bought by US-based Alltech in 2016).

With six rotating taps and a wide selection of bottles from trendy craft breweries across the UK and Europe, The Woodworkers is the crown jewel in Belfast’s beer scene. In the long taproom, enjoy a monthly tap takeover, like a recent focus on Scandinavian brews, featuring Danish brewer To Øl’s Santa Gose Fuck It All or Equinox IPA by Northern Ireland co-op brewer Farmageddon.

The Crown Liquor Saloon is not the oldest bar in Belfast, but it’s an institution nonetheless. With an embossed paper ceiling and stained glass windows, it was last refurbished in 1885. Known for its gin and traditional British cask ales, you can also find brews from Northern Ireland, like Belfast Ale from Whitewater Brewery.

In the city’s Cathedral Quarter, the décor at Bootleggers—think gangster mugshots, cow skulls, shipping pallets, and vintage pennants—is inspired by Prohibition-era America. Try a bottle of Sailor Town Beer, a hoppy lager from Belfast beer and spirits brand agency When We Are Giants, or Fulcrum, a Wheat Ale from Clearsky Brewing.

The oldest traditional Irish pub in Belfast is Kelly’s Cellars, built in 1720. A meeting place where the United Irishman planned the 1798 rebellion, you’ll still hear Irish Gaelic spoken here. While you won’t find local beer, you will find the newest offerings, like a Citra IPA, from The Open Gate Brewery, Guinness’ experimental arm. It’s worth the trip for the diverse crowd and the band playing traditional folk music in the corner.

Or is Belfast’s oldest pub White’s Tavern? It’s a debate, but Northern Ireland has seen enough fighting to let the two both claim the mantle. Around since 1630, many of the patrons seem to be nearly as old as the bar. Enjoy a Hilden Halt, an Irish Red Ale, or try a Barney’s Brew, a Wheat Ale with notes of cardamom, coriander, black pepper, and citrus, both from Hilden Brewing Co.

Down the street, The Hudson has a huge covered beer garden with smoking and non-smoking sections, a quirky and colorful cocktail room upstairs with plush chairs, and a spacious pub downstairs. Get the Hudson Burger or the famously spicy wings, and wash it all down with a Roundstone Irish Ale by Tennant’s, or a Gladeye IPA by Scottish microbrewery Drygate.

Named for a Belfast poet, profits from The John Hewitt, benefit the Belfast Unemployed Resource Centre. The beer selection here might include Belfast Pale Ale by Hercules Brewing, Full Sail by Galway Bay Brewery, or a Master Brew Kentish Ale from Shepherd Neame in Kent, England.

A security cage outside the front door of the Sunflower Public House is the last of its kind at a Belfast pub, a reminder of The Troubles, when the location was the target of a car bomb in the 1970s and a machine gun attack in the 1980s. There is live music every night, which can be enjoyed with Black Bucket, a black Rye IPA from Kinnegar in County Donegal.

A fixture since 1870, The Garrick is a proper Irish pub with an open fire and a backroom sports and music bar. There isn’t much local on tap, but in bottles you can get Granite Lager from Cloughmore in County Down, or the Irish Stout made by McGrath’s, a brewery from County Armagh in Northern Ireland named after “Mighty Master McGrath,” a champion racing greyhound.

Finally, let it all end with the new. The team behind the automated homebrewing system Brewbot opened a Belfast brewpub in 2015, showcasing its own creations alongside many guest taps. Brewbot Belfast is a bit out of the way, but boasts an exceptional tap list, with beers like its Stout, The Outer Limit, or imports like Biere de Saison Citra by The Kernel in London and Ardberg, an Imperial Stout by Manchester’s Cloudwater Brew Co. ■ 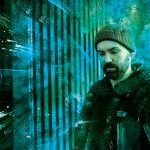 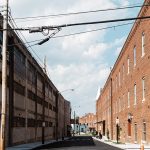