Where to Drink in Portland, Maine 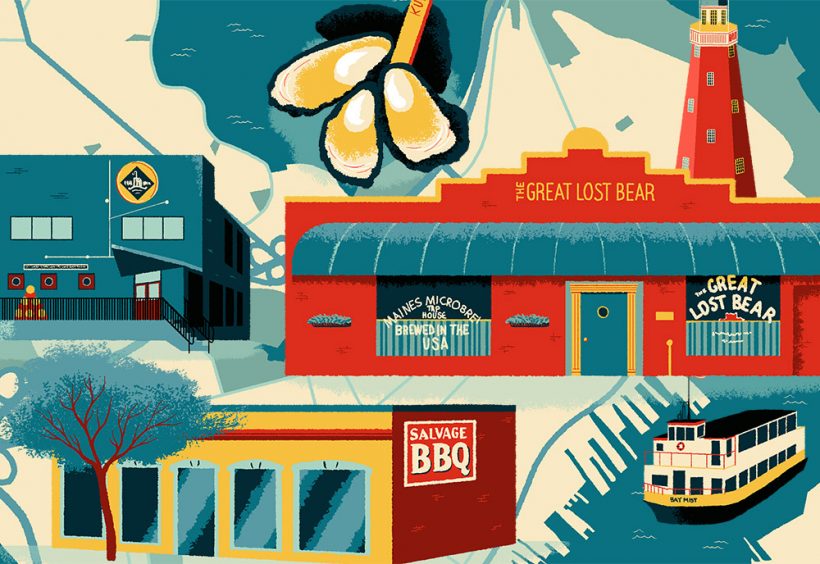 Maine’s reputation as Vacationland, and millions of yearly tourists, have allowed a food and beverage scene to flourish here in a way normally reserved for huge metropolises. In Portland alone, the state’s largest city at nearly 67,000 residents, close to 20 breweries ensure the world-class restaurants and bars lining the Old Port’s cobblestone streets have access to the best bottles of fruited sours, cans of pristine European-style lagers, and kegs of coveted New England-style IPAs reeking of trendy hops.

Yes, the beer scene here has come a long way since 1851 and Portland Mayor Neal Dow’s infamous “Maine law,” the progenitor of Prohibition; it’s also made great strides since 1986, when D.L. Geary opened his namesake business, the state’s first post-Prohibition brewery and a proponent of fast-acting Ringwood ale yeast. Buttery British styles defined Maine’s early microbrewing phase, led by its largest brewer, founded in Kennebunk as Federal Jack’s Brew Pub in 1992, then expanded to downtown Portland as Shipyard Brewing in 1994.

In 1995, Allagash Brewing opened in the same industrial park as Geary’s, bringing the promise of change even as it struggled to sell skeptics on the joys of a cloudy, spicy Belgian-style Wit. Nowadays, thanks to the foresight of early adopters like venerable beer bar Great Lost Bear, almost every restaurant and pub in Maine offers at least one locally made draft option, often the now iconic Allagash White. Its success has enabled Allagash to expand extraordinarily and fund funky advances like its renowned wild-fermented Coolship series.

It also encouraged creativity in Maine’s brewers, whose numbers skyrocketed from about 40 to close to 100 over the past few years, thanks in large part to a law change in 2011 that allowed breweries to sell beer on site instead of giving away free samples. Many of Portland’s best and brightest are or were located at 1 Industrial Way, hallowed ground across the street from Allagash. Former residents include Maine Beer Company, Bissell Brothers Brewing—now part of a Thompson’s Point development that includes a winery, a distillery, and an open-air festival venue—and Rising Tide Brewing, now in “Yeast Bayside,” home to distilleries, coffee roasters, kombucha makers, new restaurants, and, of course, more breweries. 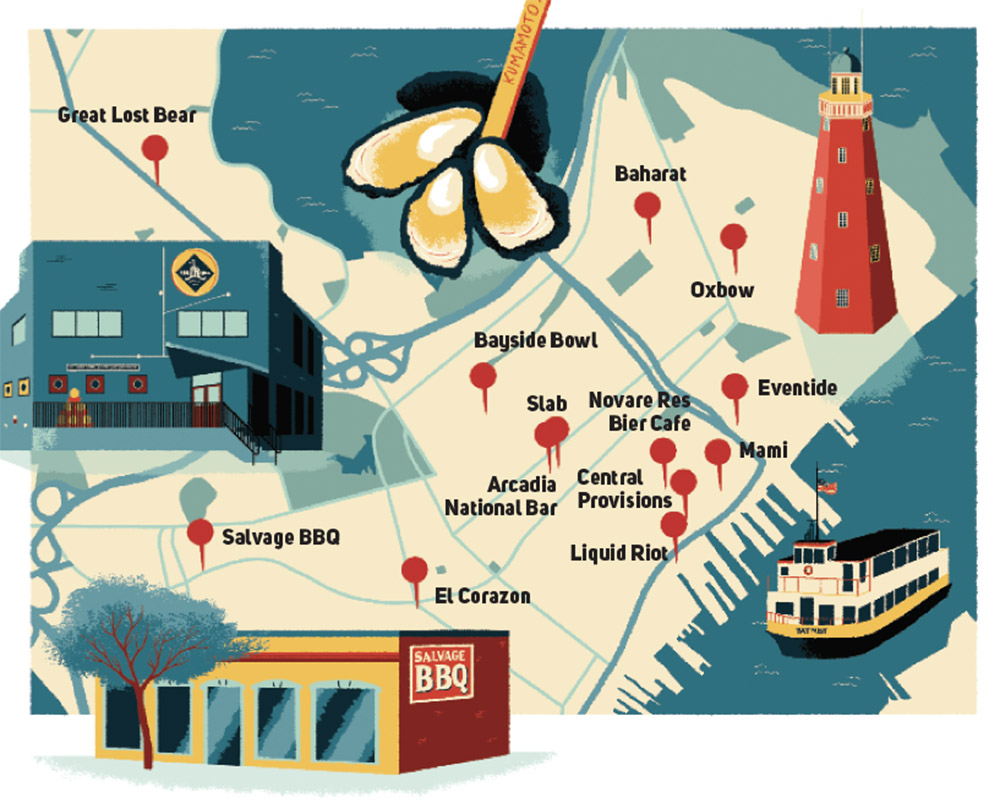 Portland’s beer mecca, Novare Res Bier Cafe is a Belgian-style bar, cozy inside and boisterous outside on a thematically graffitied deck. The concise food menu is worth a look for comfort twists like crab rangoon grilled cheese, while an astonishing list of international taps and bottles makes this one of the few places around the country to occasionally find Cantillon. The local selection showcases everything from 9 Steins, a ninth-anniversary smoked Bock made with Belfast’s Marshall Wharf Brewing, to house beers like Careless Whyspers, a Galaxy-hopped Tripel from sibling brewpub and distillery, Liquid Riot, another must-visit just blocks away on the waterfront.

Nearby, Central Provisions is an essential downtown eatery. Blending worldwide influences from French to Japanese, small plate options shift frequently, but the spicy beef salad is a constant knockout and the smoked carrots will remind you why they became a nationwide trend. The tight beer list even spawned Foundation Brewing Company’s core Brown Ale, Burnside, from a beer dinner one-off in 2014.

Run by James Beard Award-winning chefs, Eventide Oyster Company draws crowds for its tiny-but-terrific brown-butter lobster roll on a bao bun and, of course, its fresh-shucked oysters, plenty of which, like the brisk Basket Islands, are plucked from Maine’s frigid waters. The secret of most regulars, though, is to scarf luscious fried Winter Point oyster buns—about half the price of the lobster rolls and lovely with Allagash Brewing’s barnyard-funked Little Brett.

Food trucks and breweries share a symbiotic relationship, so it’s no surprise that new brick-and-mortar locations from mobile start-ups have stacked their bars with the local brews they love. Sprung from Mediterranean-inspired CN Shawarma, which used to park down the street at Rising Tide, Baharat pairs lamb skewers and garlicky potatoes with Rising Tide’s Pisces Gose, splashed with Maine’s briny ocean water and kettle-soured. On the other side of the peninsula, Mami’s izakaya in the heart of the Old Port fills bellies with savory Japanese okonomiyaki pancakes and grilled yakisoba noodles alongside cans of Mast Landing Brewing’s Milk Stout, Gunner’s Daughter.

And at El Corazon, try fried fish tacos and the legendary Sonoran hot dog. Wrapped with bacon and topped with burrito fixin’s, it’s highly suited to the crisp German Pale Ale, bittered with Tettnang and Hallertau, from Dirigo Brewing in Biddeford.

Bayside Bowl brought fresh energy to the Bayside neighborhood and to the sport of bowling when it opened in 2010, trading nasty cheese goo for real-deal comfort food like tater tot poutine, and swapping pitchers of Budweiser for Bissell Brothers Brewing’s dank and murky Substance IPA. It even eventually convinced the Professional Bowlers Association to bring the pro tour to town. A recent $3 million expansion added a baller rooftop deck complete with a taco stand for full enjoyment of Maine’s fleeting summer nights.

A short walk away, work up an appetite playing vintage arcade games, pinball, home consoles, and board games while sipping Lone Pine Brewing’s Portland Pale Ale from one of Arcadia National Bar’s seven rotating taps, then skip across the street to catch live music in Slab’s beer garden, an idyllic setting for the eponymous one-pound squares of pillowy, billowy Sicilian-style pizza. The restaurant also has one of the city’s most impressive draft lists, including sought-after behemoths like marshmallow-infused Imperial Stout Stay Puft from Saco’s Barreled Souls Brewing.

A co-owner of Bunker Brewing, which recently expanded to an industrial-chic brick building on the western margin of the peninsula, also runs a West End restaurant, the spacious Salvage BBQ. This self-service spot cranks the beer focus up, too: 16 taps dispense mostly in-state gems, including, of course, plenty of Bunker’s rotating IPAs or the crushable Machine Czech Pils. Order as much as 64 ounces at a time to wash down St. Louis-style ribs and fatty brisket smoked over Maine red oak. ■ 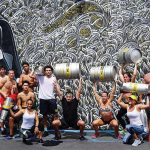 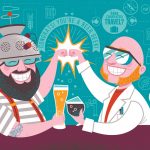