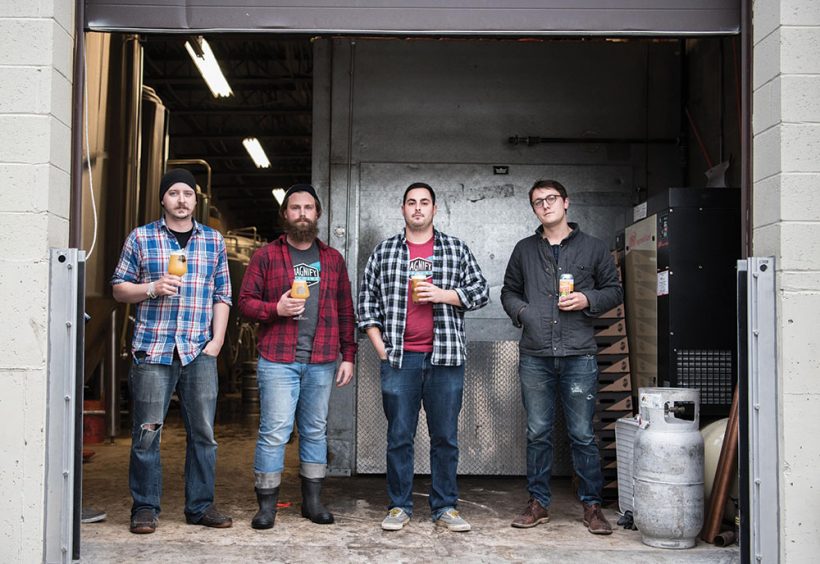 Shortly after dawn on a Saturday morning in September, a line of beer lovers starts to form outside Magnify Brewing Company in Fairfield, N.J. They came from New York and Pennsylvania, but also from Virginia and Ohio.

The first to arrive, an e-commerce specialist named Kirk Smith, lives only a few miles away. But he’s eager to buy the three new IPAs the brewery will release at 11:00 a.m., including a double dry hopped version of the Double IPA Beautiful Liquid. “I also came to see my friends,” Smith says after leaning forward in his camping chair to take a sip from a can atop his cooler. “Waiting for beer is like a bonding ritual.”

Hours later, and minutes before sales start, the line has grown to about 140 people, including one of Magnify’s employees, who declares, “I’m not going to risk the chance of missing out just because it’s my day off.”

Inside, cases of cans have been stacked near the entrance and Magnify’s president and founder, Eric Ruta, arranges an assortment of bagels on the taproom bar.

Over the last year, Ruta’s brewery has emerged as one in a small but growing group of beer makers across the country producing IPAs, particularly in the New England style, that enthusiasts will queue up for hours to acquire. “They’re hardcore,” he says of his fans, who arrive earlier and earlier with each new release. But as waiting lines grow, Ruta’s taking steps to manage them and to sell to a broader audience. “We want to get our releases into as many hands as possible,” he says.

Portland Pilgrimages
Ruta’s fascination with beer started as a student at Bates College in Lewiston, Maine. On weekends, he drove 70 miles round trip to Portland to attend releases of Allagash’s spontaneously fermented sour ales and drink Foundation and Bissell Brothers’ hazy IPAs fresh from their taprooms. Each trip further fueled his passion. “There was always a reason to go, a new brewery, a new beer,” he says.

But his experience was noticeably different when he went home to northern New Jersey on college breaks. “It wasn’t like it is now in my part of the state,” he says, referring to breweries like Brix City, Twin Elephant, and Alementary that have arrived in the region in recent years. He also acknowledges the critical foundation laid by Kane and Carton, coastal breweries that launched in 2011. “They were a big inspiration,” he says. “It got me thinking about how I could help establish a community around beer in northern Jersey, and that’s where the name Magnify came into play. I wanted to magnify my area as a destination for great beer.”

While pursuing an environmental studies degree, Ruta interned nearby at Baxter Brewing Company, mostly doing research and marketing. “It was a great hands-on experience learning in that environment.”

By graduation, Ruta was ready to make his brewery vision a reality. “I would take a break from writing my thesis and work on my business plan, developing the brainchild of what is now Magnify,” he recalls.

“He’s always been very driven,” says Sheryl Monheit, Ruta’s mom. She handles the finances and works in the taproom, which has changed her drinking preferences. “I was always a glass of Cabernet person, but my palate has definitely shifted to where now I’ll crave a hazy, juicy IPA like a lot of the customers,” she says, laughing. 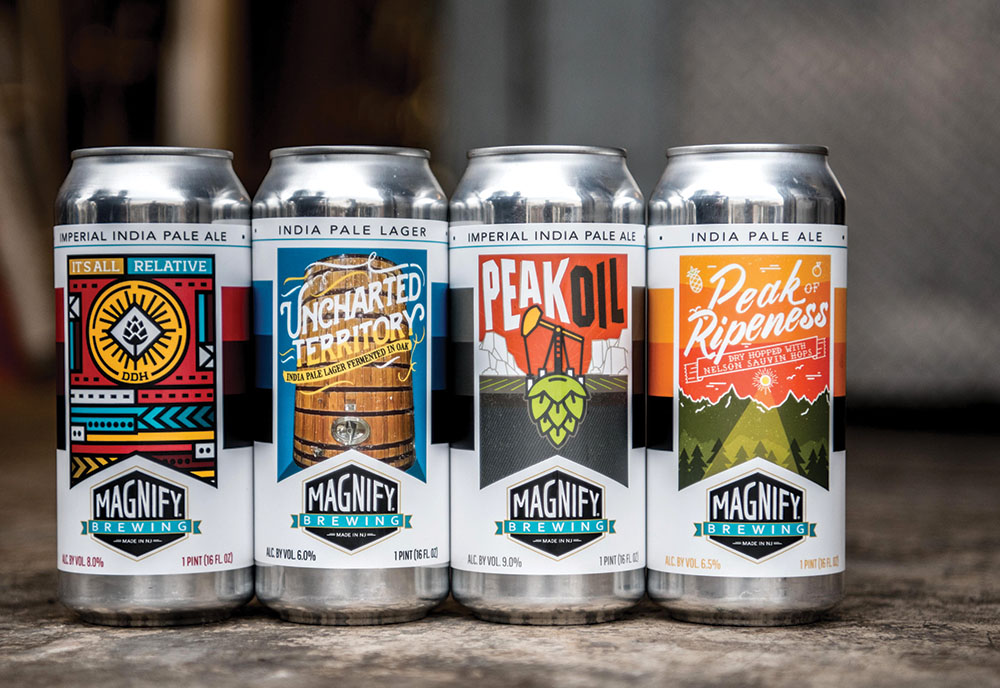 New England via New Jersey
In May 2015, Ruta opened Magnify about 30 miles from his hometown of Ridgewood, N.J. He was just 23 years old at the time, making him the state’s youngest brewery owner. In the taproom with Erich Carrle, Magnify’s head brewer, Ruta, now 25, recalls the first year of business. “We hit the streets hard,” he says. “We went to all the local bars and tried to introduce ourselves. And we got over 200 accounts.”

“We were also trying to find our niche in the beginning,” Carrle says, pouring himself an Imperial Cold Side, a “zero IBU” Double IPA that is entirely dry hopped.

Carrle, formerly of Hermitage, Speakeasy, and Greenpoint Beer Works, brewed a lot of different kinds of beer at the outset. But it didn’t take long to notice that IPAs, particularly in the wildly popular New England style, were Magnify’s best sellers. Maine Event, which debuted last summer and pays homage to Ruta’s formative experience in Portland, was their first immediate hit. “Cans sold out in a day, and later we were getting tagged on Instagram from people in other states that had been sent cans,” Carrle says. “That was a lightbulb moment.”

In the following months, Magnify shifted its focus largely to the New England-style IPA. “It appeals to almost everyone,” he says. “We have people come into the taproom saying they hate IPAs because they’re too bitter. But then they taste the six IPAs we usually have on our eight taps and they see how each is drastically different, and how this style isn’t the IPA of old. And they leave loving juicy IPAs.”

To satisfy the growing fan base, Carrle has created over 60 different IPAs to date. “A brewer could spend their whole life brewing IPAs with just Citra, Simcoe, and Cascade hops, and never run out of different ways to express them,” he says.

IPAs account for about 85 percent of Magnify’s production, and even more of its packaged beer. But the style isn’t its only specialty. “We also like exploring wood aging,” Carrle says, alluding to Search Saison, a year-round offering fermented in an oak foeder (the brewery has two, one dedicated solely to farmhouse ales, the other to lagers) with multiple strains of Brettanomyces yeast. Point of Divergence, an annual Imperial Stout, is fermented with wine yeast and aged for 12 months in bourbon, red-, and white-wine barrels before the results are blended. “Focusing on IPAs gives us the freedom to really experiment with other kinds of beer,” he adds.

The team also experiments within the New England-style IPA category. Originally conceived as a one-time collaboration with Pennsylvania’s Søle Artisan Ales, Keep It Mello will be brewed again for BeerAdvocate’s Extreme Beer Fest in February. Cans of the first batch sold out in three hours. “People keep asking us to make more,” Ruta says. It has likely “stuck” with fans in part because of one gooey ingredient: nearly four pounds of Marshmallow Fluff per barrel.

“Marshmallow Fluff is truly the strangest and most alien ingredient I’ve ever had the pleasure of brewing with,” says Joe Percoco, founder of Søle Artisan Ales. “Seeing the Fluff float around in the kettle among the hops was like watching the Michelin Man sunbathing in a sea of algae. People loved that beer.”

Further Magnification
The excitement surrounding Magnify’s copious hop-driven output caused the brewery to be “stretched real thin capacity wise” in early 2017, Ruta says. In the last few months, Magnify added a 20-barrel bright tank, and 20- and 40-barrel fermentors. To keep up with demand, Carrle and brewer Sean Connelly are double batching four to five times a week, and annual production is expected to increase to 4,000 barrels in 2018, up from 2,500 this year. A new off-site warehouse added 4,200 square feet of space to grow Magnify’s barrel-aging program and increase storage for items like cans.

To help manage the long lines for those cans once they’re filled, weekly releases were moved from Friday or Saturday to every Wednesday. “Lines are good for ego, but bad for business,” Ruta says. “Selling cans directly from the brewery has been a major lifeblood for us and other small breweries, but we have to be able to have people come and buy them in a way that’s not stressful or chaotic.”

Still, whether coming from the adjacent town or three states over, Ruta understands that most of Magnify’s drinkers are there for the IPAs. “And that’s fine with me,” he says. “This is what we like to do, so I’m not ashamed of being labeled as an IPA brewery.”

Carrle agrees. “It’s what we do best, so why shy away? Now that craft drinkers are more familiar with what’s out there, it’s great that brewers can focus on, and perfect, one or two specific things. We love to make hazy IPAs, and we’re excited to be known for it.”

Search Saison: This year-round beer is fermented in the brewery’s Saison-exclusive oak foeder with multiple strains of Brett. A pleasing combination of fruit, funk, and earth. 5.5% ABV

Peak Oil: A concentrated hop experience, this DIPA is built on Citra, Mosaic, and Amarillo in the whirlpool, dry hopping with Citra and Mosaic lupulin powder, and conditioning on Apollo oil. 9.0% ABV

Double Dry Hopped Maine Event IPA: This take on a New England-style IPA showcases Citra and Simcoe via two rounds of dry hopping, the second with the lupulin powder of both varietals. 6.5% ABV

Point of Divergence: Fermented with wine yeast, this Imperial Stout is aged in bourbon, red-, and white-wine barrels for one year before blending. Dramatic and tannic, with flavors of dark fruits, chocolate, and tobacco. 10.5% ABV

Keep It Mello: A collaboration with Søle Artisan Ales, this DIPA is made with Marshmallow Fluff, oats, wheat, vanilla beans, lactose sugar, and Galaxy and Motueka hops. Sweet, fruity and reminiscent of a milkshake. 8.0% ABV ■ 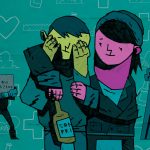 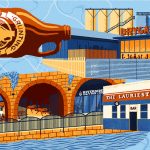