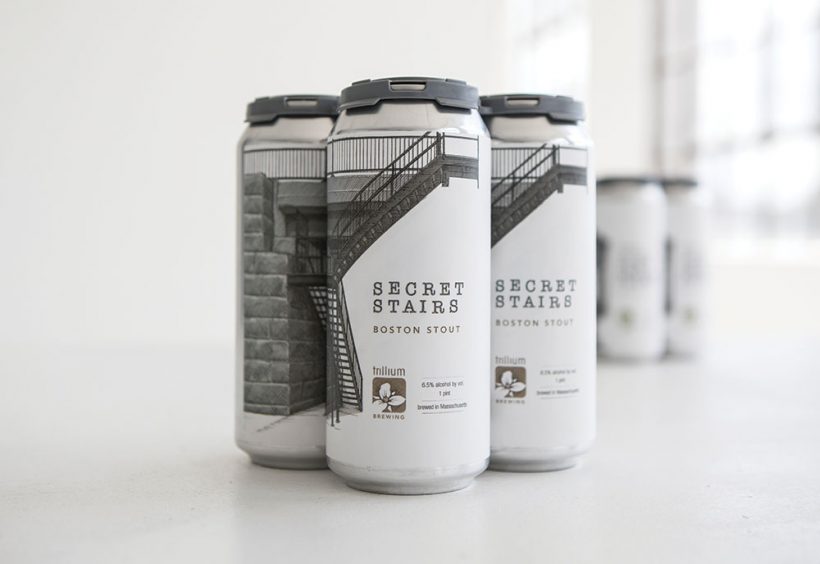 Street lanterns, uneven cobblestone, winding one-way streets; Boston is defined by the historical, iconic, and often quirky features of its urban design. It’s an attribute beloved by locals, many of whom thought they had their own hidden gem in the staircase linking Summer and A Streets in South Boston—until Trillium Brewing blew up their spot.

“Some people think it’s their own little secret,” says Kevin Cimo, Trillium’s designer, about the stairs around the corner from the brewery’s Fort Point location. “In those early conversations, I wasn’t sure if we were going to keep it really obscure and try to keep that secret intact, or [if we would] just go ahead and depict the stairs as they are, kind of revealing the secret to everybody.”

But as Cimo started photographing the stairs to use as a reference for his illustration, he realized the geometric angle of the staircase was a perfect fit for Trillium’s label structure. Nearly all of the brewery’s labels showcase Cimo’s artwork “edge to edge” on the left side, with the company logo and beer info—including name, style, strength, and volume—on the right. Cimo even illustrates over the base typeface to create a cohesive look between the type and the illustration.

“From the start, it felt really artisanal and handcrafted—hence we had labels printed on craft paper,” says Cimo. Once Trillium began packaging in 16-ounce cans, they adopted a clean, white background in lieu of the more natural-looking paper used for the bottle labels.

The vessel may have changed, but Cimo’s cross-hatched style hasn’t. Inspired by Cooks Illustrated magazine, the brewery’s signature look was conceived for the wedding of Trillium founders JC and Esther Tetreault. When JC Tetreault decided to homebrew three beers for the big day, he asked Cimo to create labels for them.

“Cooks Illustrated, when you’re in your 20s, is not something that’s normally laying around somebody’s apartment. But it was always around JC’s, and I’d end up flipping through it,” recalls Cimo. “At first, I told JC, ‘I absolutely can’t draw this.’ It was a style I didn’t think I could nail down.” Eventually, Cimo says, it worked out. “The Trillium logo is the same logo that we used on the wedding beers.”

“It started off as a fun project helping a friend,” he says. As Trillium grew, Cimo left his job at a major advertising firm to launch his own creative agency, Fair Folk. Trillium was its first client.

“It’s really cool that I could help JC, being one of my best friends, get his business up and running, and, not long after, he was able to do the same for me.” ■ 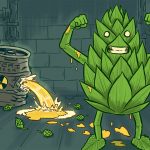 Previous: Mutants and Transformers: A Look into the Future of Craft Brewing 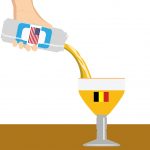