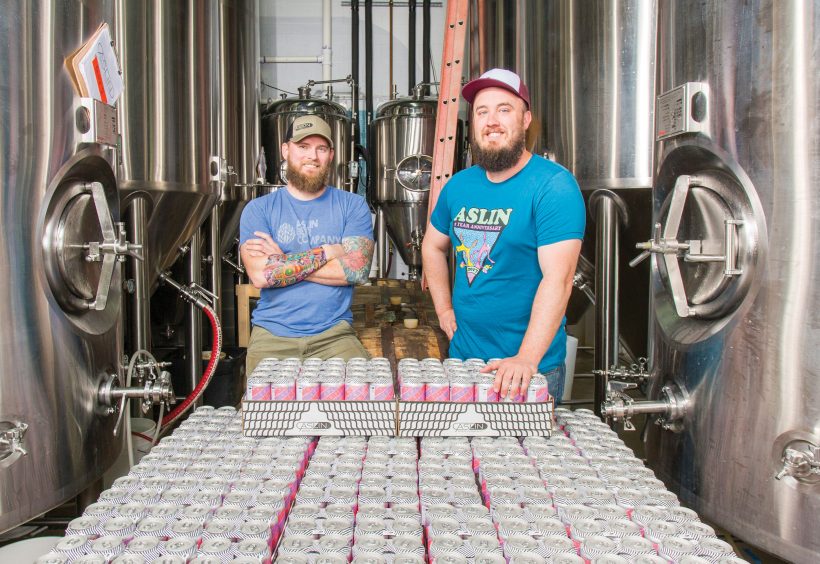 Aslin Beer Company pulled off a wild trick: It brewed an IPA far bigger than most Russian Imperial Stouts, hit it with all the hops in the world, and the thing wound up being shockingly tasty. That was no guarantee, however; during fermentation, the beer looked and smelled awful, and the volume of dry hops floating around kept Aslin’s brewers from getting a proper temperature reading. But the beer worked out, convincing Kai Leszkowicz of one thing: “We should try something stupider.” Aslin, the Northern Virginia brewery Leszkowicz co-founded more than three years ago with Andrew Kelley and Richard Thompson, thrives on taking big swings, learning and improving from those experiments, and not being afraid to whiff every now and then.

Leszkowicz enjoys playing around with varied styles, but New England IPAs pushed to the limits with new hops and adjuncts dominate the brewery’s portfolio. The approach has paid off. Aslin’s beer is only available to-go from the brewhouse, and lines of fans greet can releases. “It’s difficult to get us, and, as a fan of our brewery, that’s hard. I just want to make more beer, get it into more people’s hands, and make them happy about what we’re doing.”

Risk it All
What does it take to ditch your career and parlay a homebrewing hobby into an industrial brewery? “It takes balls, and stupidity,” Leszkowicz jokes. “I’m passionate about this, but, in reality, I was unhappy with my career path, and I was willing to risk everything, including my marriage and our home, to make this work. I equate it to the gambler’s mindset: You have to be willing to risk everything, and maybe walk away with nothing.” But that’s just the beginning, he found.

“I think it’s a daily routine for most brewers, whether they’re successful or not, to wonder, Is this going to be here in two years? What are we doing to stay afloat and keep the gains we got last year?”

Start Where You Can
When Leszkowicz and his co-founders were preparing to launch Aslin Brewing, they assumed they needed to start with a 10-barrel brewhouse and maintain a wide distribution footprint to be profitable, because that’s what all the online chatter they were reading indicated. The problem was, they didn’t have the cash to follow that path. So they improvised.

Aslin launched as a 2-barrel nanobrewery selling directly to consumers on premises and grinding out gradual equipment expansions with the cash the little operation threw off. “We had to find the most accomplishable goal for what our money would get us,” Leszkowicz says. “And once we went that route, we wondered, Why doesn’t everybody do this?”

Be Direct
Initially, Aslin’s direct-to-consumer sales model was a necessity: Brewing at a tiny scale meant the brewery couldn’t afford to give away percentages to distributors and retailers. Leszkowicz wants Aslin to grow, and to be able to get fresh beer into the hands of anyone who wants it. Protecting the brewery’s margins by selling beer out of its front door has been the quickest path to that goal.

Beyond the math, though, selling direct has enabled Aslin to forge deep personal connections with its customers. “I prefer our method to putting beer in kegs and sending them around,” Leszkowicz maintains. “I want to watch people enjoy what we do. When I have 10 people in front of me, I get to ask 10 people, What do you think? I pry and dig. By sending your beer to a bar, you’re not going to get that feedback.”

Listen Up
Leszkowicz readily admits that Aslin had some stumbles early on. “Some of our original recipes were not executed well, and we don’t make them anymore,” he says. “You try things, you fail, and you move on.” Leszkowicz attributes Aslin’s growth to the team’s willingness to seek out feedback, even when it stings, and learn from it. “We’re open to any feedback from our customers, whether it’s positive or negative. Whether we might think it’s accurate is irrelevant,” he argues. Aslin is now in cans rather than large bottles, for instance, because that’s what customers wanted. And Leszkowicz credits engaging customers in person and online with Aslin’s ability to smooth out months of inconsistencies that followed a jump in production capacity. “If a person perceives that what they’re saying is worth it, you should interpret it that way as well. You have to make adjustments and concede your faults.”

Build A New Classic
Despite producing a variety of recipes from Stouts and Browns to fruited Berliners and Goses, Aslin is mostly known for a single style: the New England IPA. “As beer nerds and brewers, that style has all those tropical flavors we’re looking for,” Leszkowicz explains. “We make those beers because we find them interesting. I wouldn’t make a New England IPA if I didn’t like drinking them, just like I don’t make Porter because I don’t like drinking it.”

The exciting thing for Leszkowicz isn’t that NEIPAs are hot right now; it’s that the style is still in its infancy. That gives him tons of room to play and explore, and to put his brewery’s mark on the style. “There are so many people making West Coast IPAs, but Pliny the Elder is still relevant, it’s still blowing people’s minds, and, for its age and access, that’s insane. If New England IPA can be [in a similar position] 10 years from now, that’s great!” 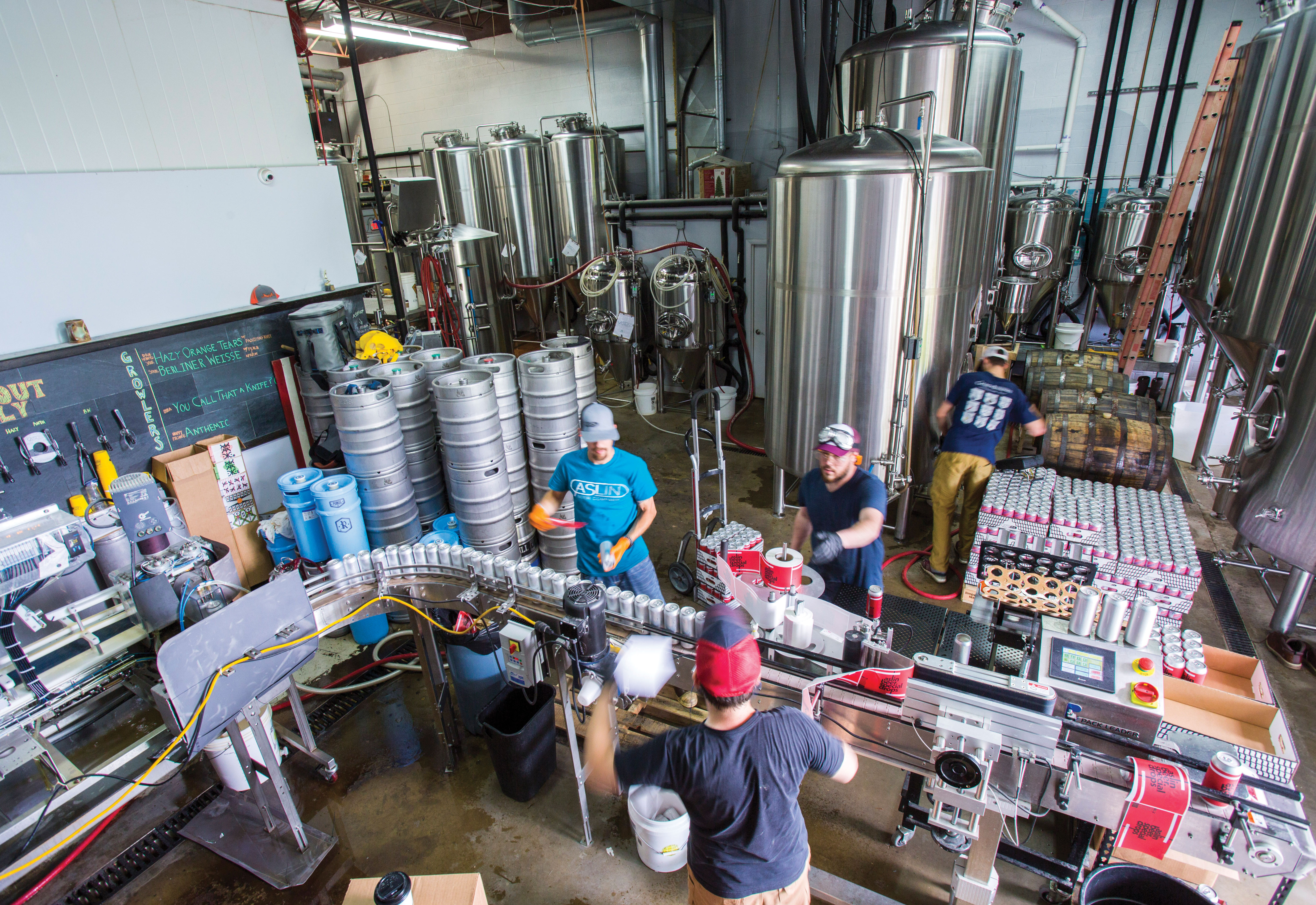 Branch Out
Mind the Hop, one of Aslin’s early standby beers, is what an English-influenced New England DIPA might taste like: It’s made with Maris Otter malt and carbonated at a lower rate, but then double-dry hopped with Citra. Its family tree also demonstrates how the brewery drives variety in its portfolio.

On a whim, Leszkowicz dosed a batch with vanilla, which sent him spiraling down a rabbit hole full of adjuncts; the result is Johann, a version of Mind the Hop that combines vanilla with rotating charges of fruit like mango and passionfruit. Another cousin, Master of Karate, amps up the Maris Otter and adds huge amounts of Mosaic, Amarillo, and Galaxy to the party. Taking the base recipe in vastly different directions is creatively satisfying for Leszkowicz’s brewing crew. And it enables Aslin to offer its regulars variety.

Do Something Stupid
No beer demonstrates Leszkowicz’s eagerness to apply experimental techniques to New England IPAs like Pinkies Up. It mashes in like a straw-colored version of the world’s biggest Stouts, with a ton of grain and a low extraction efficiency adding up to an 18.4 percent ABV monster. It’s then dry-hopped with Amarillo, Citra, Galaxy, Mosaic, and Nelson Sauvin hops. The resulting beer manages to be simultaneously thick and pillowy, dank and juicy, and, most importantly, more drinkable than it has any right to be.

“We don’t do anything in our process that normal people do,” Leszkowicz jokes. “With all these hops, this stupid runoff, the extremely high alcohol, we’re trying to make our brand match our personality: We’re willing to be flippant, flamboyant, and have fun with our product.” To him, brewing an Aslin IPA means taking attributes and methods from a diverse range of beer styles, and trying them in new ways. “The consumer reaction alone has been enough to make me want to try more stupid things.” ■ 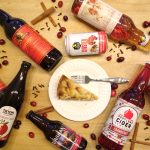 Previous: Fresh From the Can: Cranberry Beers and Ciders for the Holiday Table 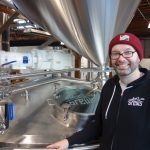