The Life of a Label Artist: A Look at Beer’s Prolific Visual Storytellers 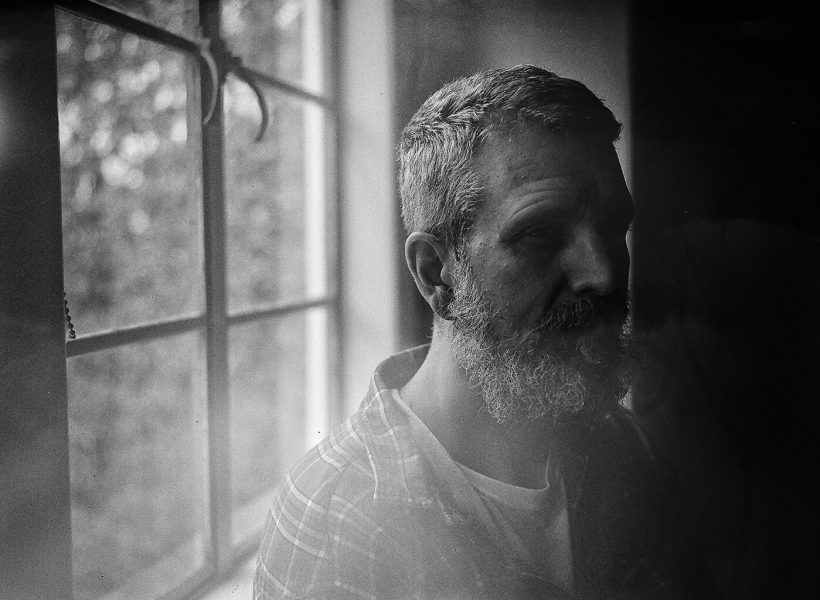 Adam B. Forman, who’s handled the artwork for Jolly Pumpkin Artisan Ales since the brewery started in 2004, sits in his home office in Ypsilanti, Mich., a sparsely decorated workspace that affords good light and a backyard view. There’s a poster from an art show his dad attended in 1980, and a sepia-toned photo of an old man in a cap, taken by his grandfather. A television he’s used once. Forman’s been working here on the sketch for one of Jolly Pumpkin’s latest releases, a hazy sour IPA called Losing Our Ledges.

The concept: “Architectural angels that you would see on buildings—kind of diving off,” Forman describes.

Like many label artists, his process starts out with little more than a name or concept, here provided by Jolly Pumpkin’s founder Ron Jeffries for the collaboration beer with Stillwater Artisanal. The layout’s done. Initial colors have been blocked in. At the current stage, Forman’s putting in secondary details: clothing (goggles or Greek-inspired?); hints at falling versus flying; and balancing use of tonal gradation and linear detail. “Now it’s just kind of about rendering… windows,” Forman laughs.

While the process for this illustration started about four months earlier, the project ended up getting bumped to the top of the queue. At Jolly Pumpkin, that queue is typically based on barrel aging’s variable timescale, and label needs can shift depending on how beers are developing. Losing Our Ledges was brewed more than a year earlier, as a tongue-in-cheek jab at the hazy IPA craze (the original name was Losing Our Edges)—and its time has finally come.

The proliferation of thousands of new craft breweries in recent years has led to a golden age of label design, as brands attempt to distinguish themselves in increasingly crowded turf. The characters and Art Nouveau underpinnings of Jolly Pumpkin—with the occasional nod to a Jack Russell Terrier named Bam—ultimately carry on a long tradition of creative alcohol advertising extending well past a century, but certainly enjoying a peak during the Art Nouveau period of the late 1800s to early 1900s. Forman cited the influence of Alphonse Mucha, a Czech painter and illustrator who created opulent posters and advertisements for Moët & Chandon (along with other clients) during that time, combining strong female figures with naturalistic design elements.

From the narrative-driven artwork of Jolly Pumpkin to the crisp populace inhabiting Mikkeller’s labels or the modernist pop-culture mashups of Stillwater, brewers and artists are increasingly using beer’s packaging as an opportunity to tell a story about their brand and the liquid inside. Complex label illustrations aren’t new for the beer industry, however. Even the labels of early craft brewing pioneer New Albion Brewing Company featured a detailed black-and-white illustration of a ship, banner, and barley cluster—with the background color rotating between styles (green for Stout, blue for Ale, and a reddish-pink for Porter). But take a walk down the refrigerated section at your local bottle shop and it’s clear that more breweries are emphasizing label design than ever.

“Design is everything these days,” says Stillwater founder Brian Strumke when asked about label trends. “From lack of attention spans to flooded markets, the majority of customers experience everything visually first—no one will taste a beer they are not compelled to pick up.”

While developing the design for Losing Our Ledges, Adam B. Forman followed a set of familiar steps to take the idea from concept to completion.

Origin Stories
Before starting to work with Jeffries and Jolly Pumpkin, Forman built a successful career as a tattoo artist—first in Michigan, then in Los Angeles. He’d attended school for fine arts, but it was 17 years of experience tattooing that made him better appreciate the importance of process, of taking apart and mastering classic techniques over time. He got to know Jeffries back when they were both working in Ann Arbor; Forman at a local tattoo parlor and Jeffries at Grizzly Peak Brewing nearby. As Jeffries came to Forman for tattoo work over the years, the two hit it off.

“He had this idea for a brewery project, and it was Jolly Pumpkin,” Forman recalls, noting that even as someone who was into beer back then, it was a challenge to wrap his head around the finer details of Jeffries’ plans, which focused on sour, oak-aged ales at a time when few other breweries utilized those methods.

In finalizing the brewery business plan, Jeffries turned to Forman for some illustration work. “A business plan is a lot of words and numbers, and it’s boring,” Jeffries explains. Adding in those illustrations helped bring his concept to life. Through this first collaboration, it was clear that Jeffries’ vision for his brewery matched with Forman’s aesthetic. “If Ron was brewing Pilsners and Stouts,” Forman notes, “I’m not sure if what I do would be as appropriate.”

Like Forman and Jolly Pumpkin, finding a brewery art director is often a combination of chance and likeminded aesthetics. Mike Van Hall, a Washington DC-based designer who now handles label designs for both Stillwater Artisanal and Aslin Beer Company, ventured into label design after reaching out directly to Stillwater’s Strumke. Through his Committee on Opprobriations, intended to be a “visual complement and challenge to all of the best things we eat and drink,” Van Hall created the Single Hop Project—a vibrant series of posters combining interests in mid-century modernism and individual hop varietals. “At the time,” Van Hall recalls, “modernism wasn’t as prominent in labeldom as it is now.”

Van Hall sent a poster from his Single Hop Project to Strumke, and it resonated. When Strumke decided to move Stillwater’s branding in a different direction, he brought in Van Hall to help chart that new course: an angular, lean modernism in contrast to the brand’s intricate earlier labels. By early 2014, “we had set up the Contemporary Works set and were getting ready to blow the doors off what Stillwater was,” Van Hall says of the series of bottled and canned beer labels emphasizing bold, geometric designs.

“Working with Mike for the design of Stillwater has been refreshing and creatively freeing,” Strumke says. “While he carries his specific traits in his art, he is not locked in or held back by any specific ‘style’—he is willing to go out on a limb and experiment with me.”

That sense of creative freedom is part of what designers say attracts them to the beer industry, pointing to the significant flexibility and artistic license built into the design process for beer labels. Van Hall has enjoyed creating and working with brand identities that have a flexibility built in. “If there is any cohesiveness to it, I think it’s our personalities,” he says of Stillwater’s brand parameters.

Forman echoes that sentiment. “My guess would be that, if we tried to nail [the ethos of Jolly Pumpkin] down too much, it might not have the same kind of energy. I love that we’re kind of improvisational and we just let each other do our thing.”

Typically, the design process at Jolly Pumpkin begins when Jeffries gives Forman a name for the beer, and they’ll have their initial discussion regarding what that beer is about: if there’s a narrative behind it, if it’s a collaboration, if there’s a theme Jeffries has in mind. Sometimes the name doesn’t come until later, and they’ll try to work from the beer’s ingredients— although, given Jolly Pumpkin’s tendency to use certain additions across a variety of different beers, that’s often not super helpful. “We would have a lot of limes,” Forman laughs.

“A lot of times I’ll give him an idea,” Jeffries says, “and he’ll come back with something completely different. And I’m like, You know what, I like that better than my idea. Let’s roll with that.”

Next comes the gradual effort to tease out the story: Figuring out emergent characters, building the visual context, and deciding how to best convey the desired vibe to the consumer. Forman will send sketches back to Jeffries and, presuming no major changes, Jeffries (who majored in English literature) will finalize the descriptive back label text to complement the front illustration.

Mike Van Hall’s 16-ounce can designs for Stillwater Artisanal, represent a significant departure from the brand’s prior imagery.

Ebb & Flow
Despite the artistic freedom, designing labels comes with its own set of challenges. The consumer demand for new beers results in the need for designers to knock out a ton of creative labels each year while simultaneously keeping up a respectable pace and quality. Along with finalizing label design for new beers like Losing Our Ledges, the majority of Forman’s creative work over the past few years has gone toward Jolly Pumpkin’s redesign, which included about 20 core illustrations, plus various collaborations and accompanying design elements.

Van Hall, predominantly designing for Stillwater and Aslin, says he spends around 80 percent of his work time creating labels, with brand identity and business strategy consuming the remainder. “Last year, it was just insane,” he recalls. “It was more than 100 labels last year, and I try and make sure that each one is novel and thoughtful and I’m not calling it in on any of them—but yeah, it’s a ton of time.” When it comes to designing at a rapid pace, Van Hall points to Mikkeller’s designer and illustrator Keith Shore. “Keith is the workhorse of all of us. That guy puts out more stuff than anybody and does it seemingly maintaining the fun the whole time.”

As breweries grow at a rapid pace, designers have to keep up. At Mikkeller, Keith Shore and assistant designer Ben Kopp produce an average of 15 – 20 labels each month. When Shore started with Mikkeller about eight years ago, he drew everything by hand and scanned images directly from his sketchbook. He’s since moved to a workflow involving Adobe Illustrator, and says that using vector-based art (allowing images to be resized indefinitely without resolution loss) makes it easier to reuse certain bits and pieces down the road.

Sometimes, the creative process involves abandoning ideas that don’t feel right. Such was the case with the design for Losing Our Ledges. After the initial conversation with Jeffries about the concept, Forman worked out a sketch incorporating a Notre Dame vibe, but with gargoyles instead of angels. The design suggested flight a bit more than Jeffries had originally intended—more floating down than plummeting—so Forman sketched a second option featuring angelic figures and a modern cityscape. Jeffries ended up liking the first sketch better, which riffed on his original idea, and he tweaked the final text accordingly.

Jolly Pumpkin’s recent redesign afforded Forman and Jeffries the opportunity to look back over the past 14 years of label illustrations and text, and to reevaluate questions of core identity. They returned to doing both front and rear labels, as they’d done in the early days (though with a hand-cranked labeler back then), allowing more room for both Forman’s art and Jeffries’ text. They were aiming to be a little less folksy in the redesign, given how the industry has shifted, but Forman says agreeing on the brand’s identity was less about coming up with core values and more about asking questions like, How much science fiction are we? How much Edward Gorey? How much surfing? “We’re a pumpkin-named brewery that has Spanish names for Belgian beers,” Forman says, summing up the quest for visual identity in a way that rings true beyond Jolly Pumpkin. “You know what it feels like when you are what you’re supposed to be. And you know what it feels like when you’re not.” ■ 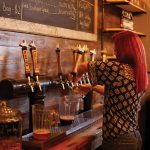 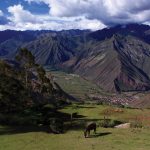