Making Sense of the Funk in Beer 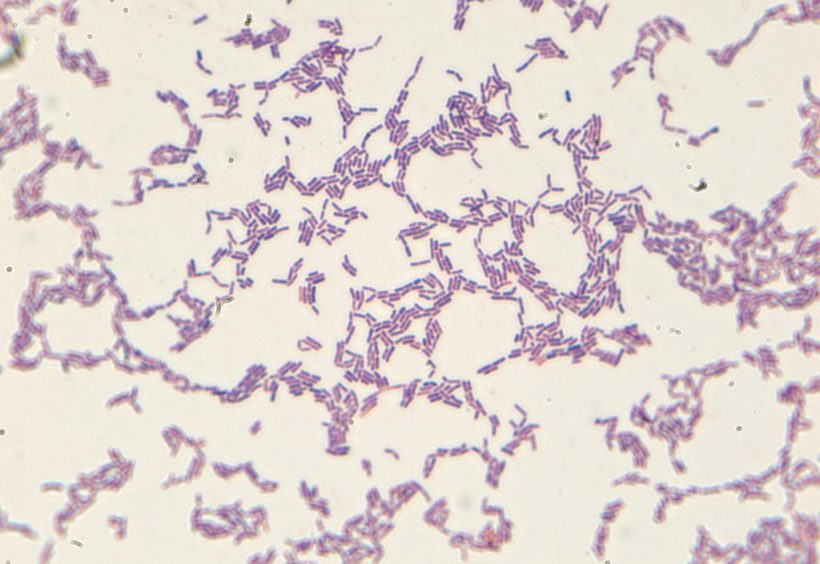 Joining our trusted actors Saccharomyces Cerevisiae and S. Uvarum in the world of sour beers are a team of misfits that would make the Bad News Bears proud. These guys make weak and watery the constitution of even the halest brewer. With smooth, stainless surfaces, strong chemicals and tight sanitation practices, these frequent natural visitors are banished from the strict Teutonic way of brewing.

Let us meet the bacteria swimming in your beer. (You OCD types might want to grab the hand sanitizer to fight that queasy skin-crawling feeling.)

Acetobacter—This bacteria’s genus is capable of converting ethanol into acetic acid (aka vinegar). Commercial “Vinegar Mothers” from your local homebrew supply store can convert every drop of your sweet beer into malt vinegar. Because it requires oxygen to work, beers with a serious Acetobacter character often carry hallmarks of oxidation as well. Topping storage vessels with CO2 effectively prevents Acetobacter from taking root. Be careful inviting this bug into your brewhouse! Balancing the beer’s vinegar character is a major challenge. (Lambic, Flemish Red/Brown)

Enteric Bacteria—Just what we all want; a whole class of bacteria that derive from, well, unpleasant internal organ areas. All natural and vital to our survival, they are just a bit creepy. Some varieties can give rise to subtle bilious and swampy flavors and aromas. They are not readily available and are not needed for your experiments. (Lambic)

Lactobacillus—These bacteria are responsible for creating lactic acid. Commonly found in natural pickles, sauerkraut and yogurt, Lacto hitches a ride into breweries on the husks of barley malt and adds a clean and potent acidity to the beer. (Lambic, Flemish Red/Brown, Berliner Weiss)

Pediococcus—To brewers and vintners, Pediococcus is the combo platter Boogeyman/Bloody Mary/Freddy Krueger/Jason Voorhees of their world. Incredibly hard to grow, once this potent lactic acid and diacetyl producer gains a foothold, it is tough to kill. Steam sanitizing and the ripping apart of whole breweries is not unheard of! Pediococcus induces a snot-like ropy beer “sickness” that eventually breaks down in the presence of Brettanomyces. This breakdown serves as a hallmark of readiness for your new “wild” beer.  Commercial cultures of Pediococcus are available, but very few producers are intentionally introducing this demon to their breweries. (Lambic)

Want to make an American vintner blanch? Walk up behind them and whisper “Brettanomyces.” Seriously, I did this the other day at a radio interview. The vintner looked horrified as he said, “You guys introduce it on purpose!?” The Brett genus is a stunted mutant cousin to Saccharomyces that enters breweries on the wings of Drosophila (fruit flies). Normally regarded as a beer/wine spoiler, these strange bugs provide the offbeat soul to many fine Belgian-style ales. Despite the unappetizing descriptions, Brett’s funky, earthy, sweaty, horsey and spicy phenols, with subtle amounts of acetic acid, catch the untrained palate in a surprising clutch that shocks it right out of complacency. Patience is normally not a virtue for our professional friends, but with Brettanomyces-infused brewing, patience is essential. Those Brett characters take months to express themselves fully. Goosing the brew temperature into the 70-80 F range while supplying continuous doses of food speeds the process along, but these bugs just won’t rush for you.

To hear most brewers talk, it would be forgivable for beer connoisseurs to think there is a single lone variety of Brett out there wreaking havoc or laying down mad flavor and aroma. Just like ale yeast, there is an endless variety of this funky guy. The four major varieties commercially available to the public include:

Brettanomyces Anomalous: Also known as the “Stout” strain of Brett, this was reputedly isolated from a British brewery. Named for an odd near-inability to ferment maltose, use of this strain as an accentuating character is normal. Aromatics are subtle, but fruity tones, especially pineapple, announce its presence.

B. Bruxellensis: Isolated from native cultures of the Senne River valley near Brussels, this is the workhorse-Brett found in so many Belgian ales. The horsey and barnyard characters of the strain are not as pronounced as the closely related B. Lambicus. Poor fermentations with B. Bruxellensis can produce medicinal and rubbery aromatics instead of the more pleasant earthy characters. Orval, despite a non-Brussels location, presents the classic profile of B. Bruxellensis. They pitch directly during bottling with two strains and allow the Brett to come forward over time. Compare young and old bottles of Orval to see the difference.

B. Claussenii: A number of sources claim that Claussenii and Anomalous are the same strain. Both were isolated from British breweries, but enough brewers swear there is a difference, so we will treat them differently. One of the best-reviewed Brett beers, Port Brewing Co.’s Mo Betta Bretta was fermented primarily with this strain, and tropical fruit and sandalwood spiciness greeted the drinker. As more brewers play with wild ales, I expect that they will use B. Claussenii more and more due to the user-friendly aroma—high on fruit and low on horsey funk.

B. Lambicus: The macho Brett. Lambicus defines all that is good and funky from these wild yeast. Big earthy, spicy, smoky, horsey flavors and aromas dominate Lambics and Flemish sour ales. Slow to develop, this strain needs time to produce fruit leather notes and acidity. Works best in conjunction with other yeast and bacteria and in an acidic environment. In a traditional Lambic fermentation timeline, Lambicus and other Brett cultures are active after Saccharomyces finishes a run.

My So-Called Wildlife
The feeding & excreting cycle of microfauna

The image of Lambic is fresh wort cooling in shallow copper pans kissed to life by the magical breezes of the Senne River Valley. Sadly, pretty doesn’t make Lambic, a fact readily apparent at the urban home of Cantillon. The Senne River flora (or dirty Brussels air) factors less in the Lambic than the careful selection of barrels, winnowed over time for their flavor contributions.

How do our misfit hellion bacteria play with each other? It’s not a billion microbe free-for-all. Turns out that our tiny cast plays nicely and each has a chance to thrive and prepare the way for the next actor.

The overnight cooling inoculates the wort with enteric bacteria. For the first week of fermentation, they produce funky esters and acetic acid before growing Saccharomyces, and then alcohol kills them off. The primary fermentation takes months since the yeast grows in less-than-ideal conditions.

Brettanomyces comes to our rescue, growing strong on the nutrients left in the goop. Over the course of a year, various strains of Brett and Candida clear out the Pedio sickness and sweep up residual diacetyl. This last phase is often when fruit is introduced, adding extra fuel to the Brettanomyces fire. As time passes, the renowned leathery, earthy and barnyard characters mature and integrate in the beer. Including a final blending before hitting the bottle, three years can pass before the microbial dance ends with your consumption!

Making one of these sour beers must be a piece of cake. Just open a window and let the air deliver its magic, right? One of America’s most experienced wild ale brewers, Vinnie Cilurzo of Russian River, would like to disabuse you of that notion!

As you sit at Russian River’s bar, you face a window stuffed with racks of oak barrels, some hissing and sputtering, others quietly lurking, waiting for their chance to shine. Closed off from the rest of the brewery, this is where his wild ales come to rest for 12 to 23 months. With names like Temptation, Beatification and Sanctification you should not be surprised with the care and reverence paid to these former wine barrels. After several years of hard brewing, Vinnie has grown his very own “funky” barrel room by introducing four strains of Brettanomyces, and a strain each of Lactobacillus and Pediococcus into his various ales. Mixing and merging with native Santa Rosa, Calif., flora, the critters crawling from the barrels there are now a distinct 4th Street microenvironment for wild ales. Thanks to the flora-filled air, Beatification is now a completely spontaneously fermented product.

Even with the tons of dollars and strict controls they use, American mega-brewers make a science out of blending to achieve their amazing batch-to-batch consistency. Thanks to this, beer geeks inevitably identify blending as a tool of the “devil,” something to denigrate. In the unpredictable world of wild ale brewing, blending is critical to smoothing out differences between barrels. Is this barrel a little sourer? This one a little sweeter? What about the funk in that one? Combined, the beer ends up a smooth and sweet tart ale. Over time, Vinnie increasingly utilizes blending to create the incredibly complex flavor and aroma profiles we expect. One of his tricks is keeping a volume of super sour ale on hand to boost the tart bite of beers that scream Brettanomyces but lack the brisk tang of lactic and acetic acid. By sitting down with glasses of his different options, he can formulate a blend with a mix of careful note-taking, tasting and an artful craft that deserves more respect.

There is risk involved in brewing these beers. The uncertainty introduced by porous oak, unreliable fermentation critters and that unique 4th Street Santa Rosa microenvironment is daunting when you consider the real money that lies on the line. Looking forward for Vinnie, he faces the challenge of establishing a brand new fermentation in the soon-to-be-active Russian River production facility.

See the kinds of things a brewer goes through to satisfy you? ■ 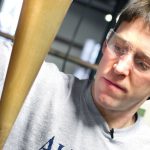 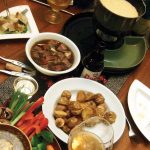