Giving Thanks to Your Local Brewers 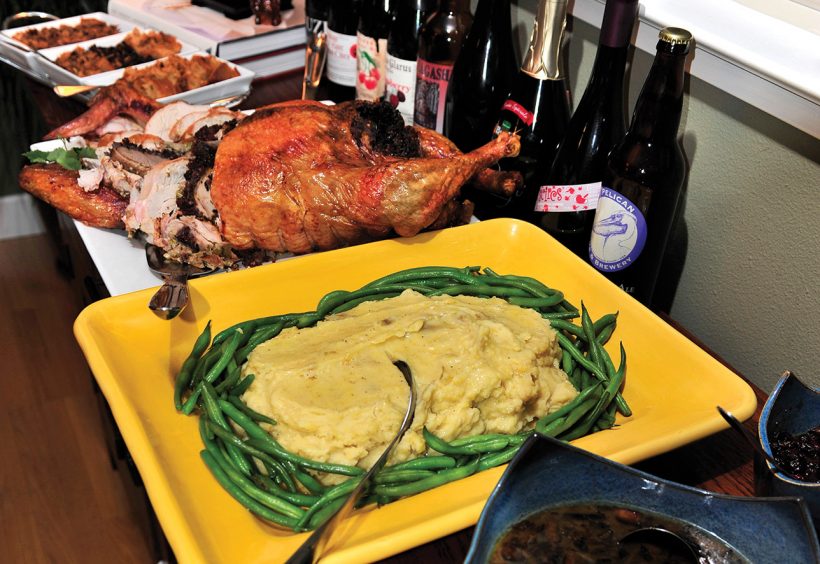 Brewers see each other all the time, pouring beer at one venue or another. Like a traveling circus, they pack and unpack their kegs and Jockey Boxes around the state to perform for the crowds. Being one thirsty brewer in a crowd of many, I wanted to give a little something back to those that give to me throughout the year. So I sent a dinner invitation out to a few industry friends, Shaun O’Sullivan, Pete Slosberg, Roger Davis, Jay Brooks and Arne Johnson, to celebrate Thanksgiving with a turducken, bière à la cuisine style…

Turducken
The name “turducken” comes from a turkey stuffed with a duck and a chicken. This version replaces the chicken with a pheasant, but any type of game bird can be substituted; just organize them from largest to smallest. This turkey can also be prepared a day in advance, cooking overnight, freeing up any kitchen with only one oven.

Directions:
Begin this recipe by preparing all three stuffing recipes separately. Wrap them in plastic wrap and refrigerate till ready to use.

Next, debone the turkey, duck and pheasant following the Anatomy of a Bird directions. Once complete, the stuffing of the turducken can begin.

Start with the turkey skin-side down and arranged so that the breast meat is on top and the thigh meat is closest to you. Season the meat with salt and pepper, dotting the entire surface with 1/4 cup of butter. Cover the turkey with a 1-inch thick layer of the pork and caramelized leek stuffing, leaving a half-inch border at the edge of the meat. Next, lay the deboned duck atop the stuffing, in the same orientation as the turkey. Season with salt and pepper, dotting the surface with 1/4 cup of butter. Top the duck with a 1-inch layer of purple rice stuffing, again leaving a half-inch border around the meat. Finally, place the pheasant centered on the duck and turkey.  Season as before and dot with remaining butter. Add a layer of ciabatta stuffing, again leaving a border. 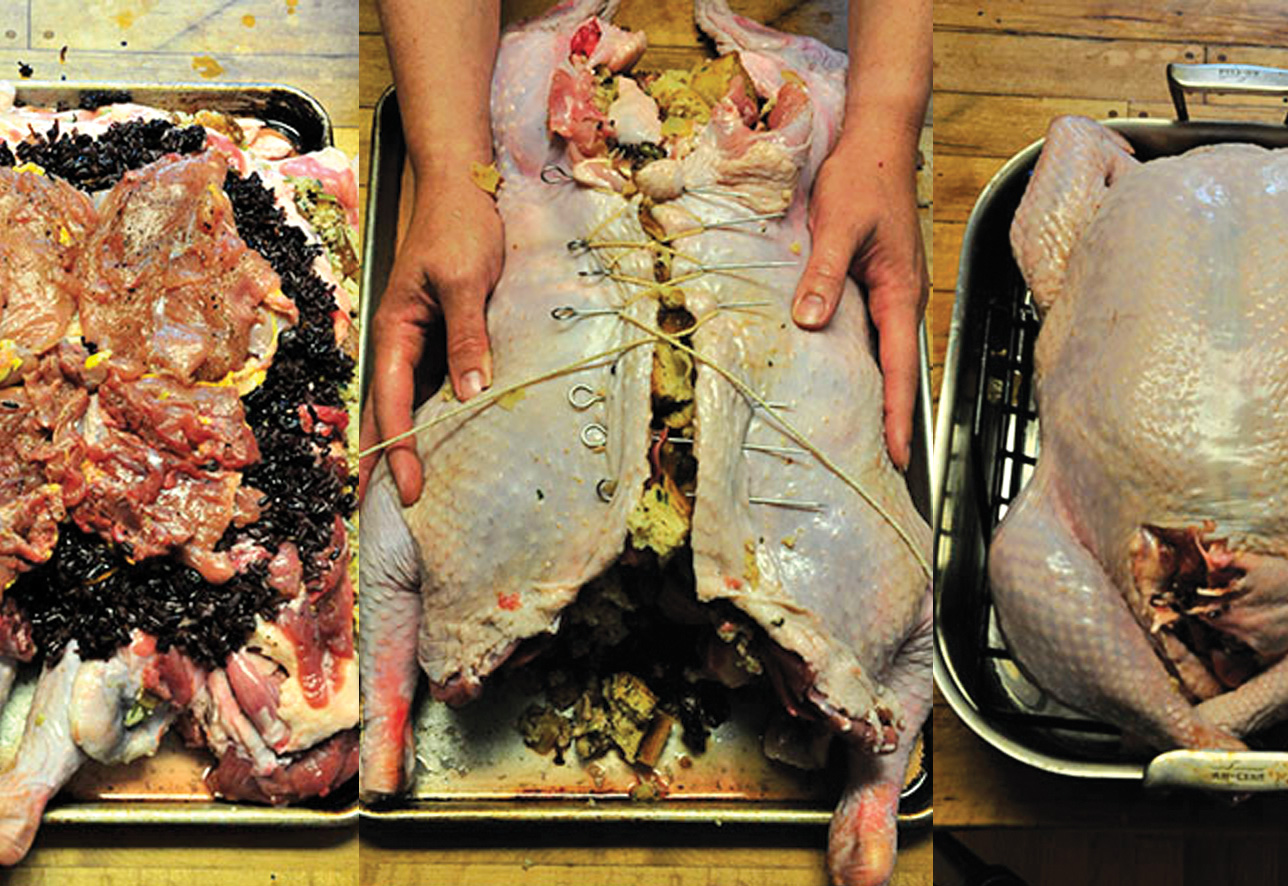 This is where a second set of hands will become very handy! Slide one hand under the left and the other hand under the right side of the turkey, bringing the turkey back together. The second person can help curl the meat together, keeping each layer from falling apart. Next, along the spine cut of the turkey, place metal or wooden toothpick-size skewers every inch or so, piercing each side of the meat, about one inch from the cut. Now, using a long piece of kitchen twine, weave between the skewers like shoelaces, pulling the skin together and sealing the bird, and then tie it off. Carefully roll the turducken onto its back. Using both sets of hands, carefully place the stuffed turkey onto a roasting rack in a roasting pan. Mold the stuffed turkey to look as much like a regular turkey as possible by folding the wings underneath the breasts and crossing the legs. Rub the skin with butter and season with salt and pepper, and sprinkle any leftover herbs from the stuffings.

Preheat the oven to 225˚F. Place the turducken in the center of the oven on convention roast (if available). Insert a thermometer probe into the very center of the stuffing. Plug into a thermometer/timer and set the temperature to 165˚F. The turducken will cook between eight to 10 hours depending on how accurate the oven is and the combined size of the birds. Remove from the oven and let rest for 30–45 minutes before serving. Cover with aluminum foil as it rests to keep warm. Save drippings to make a roux for a gravy base.

To carve, since all the bones have been removed, cut across the breasts, as you would a roast. Serve a slice to each guest. 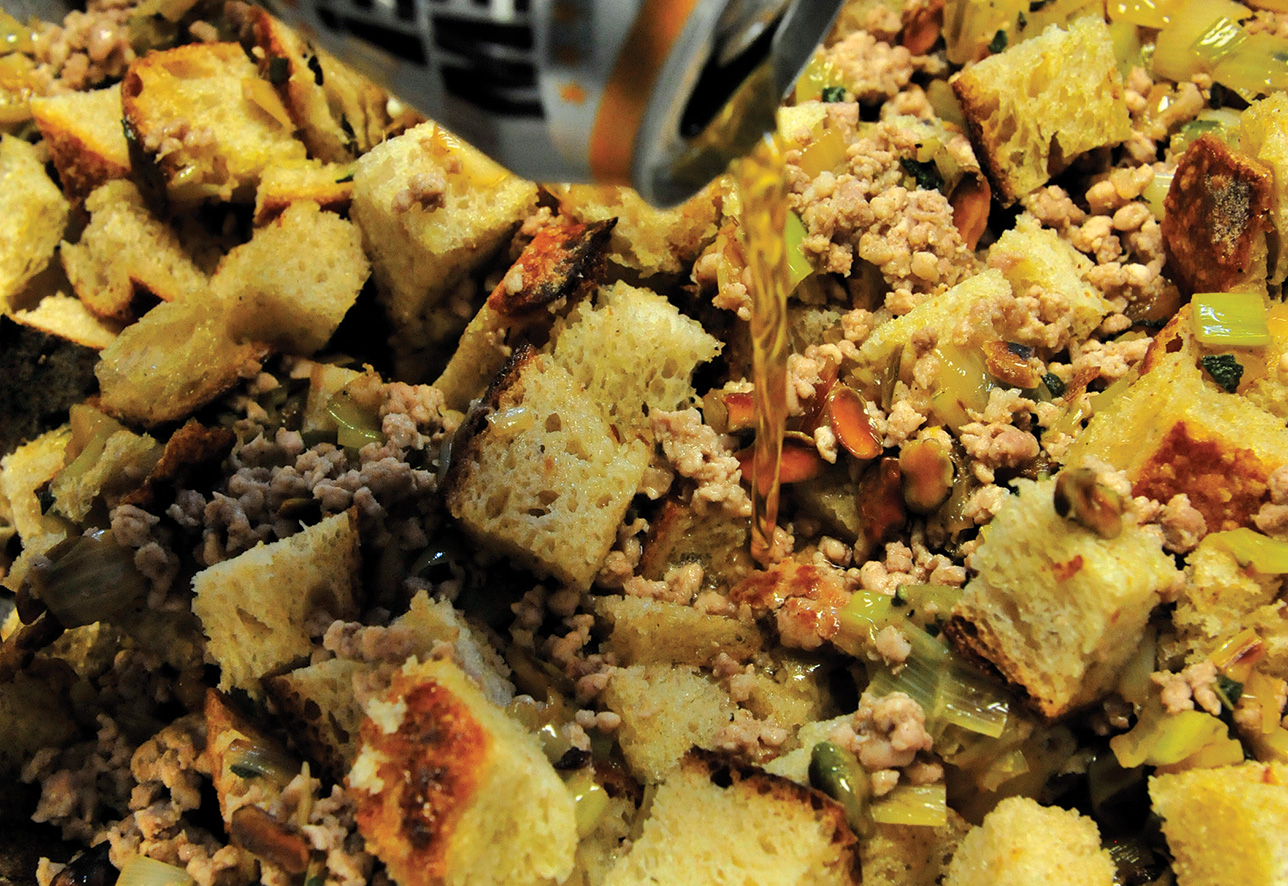 Pork and Caramelized Leek Stuffing
This is the first of three stuffings, layered between the turkey and duck.

Directions:
Start by taking the loaf of bread and cutting it into 1-inch cubes. Place cubed bread on a sheet tray and let it dry out (can be done one day in advance).

In a large Dutch oven over medium heat, add butter and allow to slightly brown. Add prepped leeks and sauté for six minutes, until the leeks are tender. Add the onions and shallots, stirring periodically for another six minutes. Add the garlic and cook for one minute more, seasoning with salt and pepper. Remove mixture from the pan and place into a large bowl. Place pan back over medium heat and add oil. Using a flat-edged spatula or other utensil, add ground pork; break up any lumps of meat as it cooks. Once all the meat is fully cooked and broken down into grind size, add sage and cook for one minute. Transfer the meat to the reserved leek mixture and mix well. Add dried bread cubes and spin the bowl slowly, adding the IPA, to evenly distribute the beer. Mix together and add chicken stock. Squeeze the bread to help fully saturate the cubes. Check seasoning, adjusting with additional salt and pepper if needed.

Set stuffing aside for filling between the turkey and duck layer. Any stuffing that doesn’t fit can be placed into a casserole pan and baked separately. Cook at 350˚F for 45 minutes.

Purple Rice and Dried Cherry Stuffing
Second stuffing between the duck and pheasant.

Directions:
In a large bowl, rinse the rice until the water runs clear. This will prevent the rice from sticking together and forming a large lump of stuffing. In a medium-sized pot with a lid, add butter. Place over medium heat and brown the butter. Add shallots and sauté for five minutes, until they become a light golden color. Add cherries and zest, stirring to combine, cooking for another minute. Add rinsed rice and toast for three to four minutes, coating with the remaining butter. Deglaze with the beer, then add the stock. Increase heat to high and bring mixture to a boil and season with salt. Partially cover the pot with a lid and turn heat to low. Cook the rice for 30 minutes, until the liquid has been absorbed by the rice, making it tender.

Take the finished rice and spread it over a sheet tray to cool.

Directions:
Take the “slipper” and cut it into 1-inch cubes. Place cubed bread on a sheet tray and let dry out (can be done one day in advance).

In a large Dutch oven over medium heat, add butter and allow to slightly brown. When the foam subsides, add onions and sauté for eight minutes, until tender. Add the celery and shallots, stirring periodically for another six minutes. Add the herbs, mixing well. Remove from heat and combine the ESB and stock, mixing to combine. Add to the cubed bread and mix well. Season with salt and pepper to taste.

Any extra stuffing can be baked separately as with the pork caramelized leek stuffing.

Cranberry Reserve Chutney
The flavors of the Grand Réserve are complemented by figs, cherries, apricots and cranberries in an untraditional chutney.

Directions:
In a medium-sized pot, add the butter and place over medium-low heat. Once the butter is melted, add the shallots and caramelize them for about 10 minutes. Add cinnamon, nutmeg and cloves, sautéing for one minute to toast them. Deglaze with the Belgian Strong Dark (leaving behind any sediment) and add figs, cherries, apricots, orange zest, juice and cranberries. Season with salt and pepper, and bring to a boil. Reduce the heat to low and simmer for 30-45 minutes. The beer should reduce down to a syrup consistency. The final product will be similar to a loose jam.

Variations: Try this chutney with pork. Would also be great on a day-after-Thanksgiving sandwich. 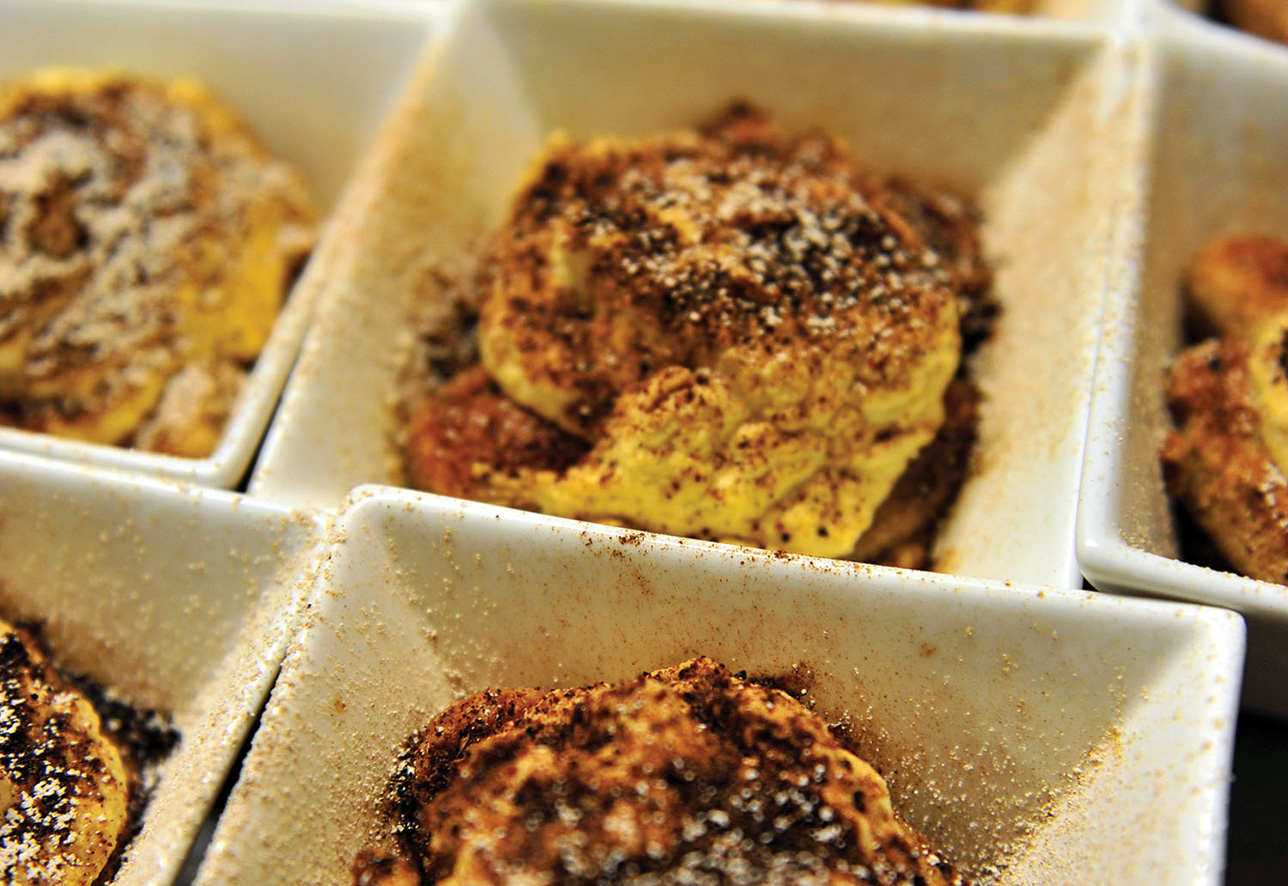 Pumpkin Imperial Stout Tiramisù
The rich chocolate and coffee notes of the Imperial Stout play up the pumpkin’s flavors, lightening the traditional pumpkin pie and making a unique dessert that will impress everyone at the table.

Directions:
In a medium-sized bowl, add cream, cinnamon, nutmeg, clove and DME. Whisk until soft peaks form. In a separate bowl, mix together the pumpkin and mascarpone until fully combined. Fold the pumpkin mixture into the spiced cream mixture. Set aside.

Pour the Imperial Stout into a shallow bowl or pie plate. Next, pick a trifle bowl or individual dishes for serving the tiramisù. Dip a ladyfinger into the stout and let sit for 10 seconds, then turn over and again, let sit for 10 seconds. Remove and place into the serving container. Repeat with remaining ladyfingers to make a single layer of cookies. Take a third of the pumpkin filling and evenly distribute it over the ladyfingers. Lightly dust the top with the roasted barley. Repeat a layer with the dipped ladyfingers, followed by another layer of pumpkin mixture and malt powder, making a total of three layers of each type of layer. For garnish on top, lightly dust with the malt powder, some cinnamon and a touch of powdered sugar. Cover with plastic wrap and refrigerate for two hours before serving to set the tiramisù and infuse the flavors. ■ 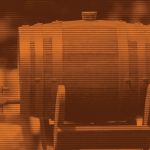 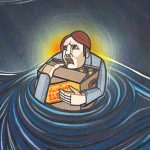 Next: Riding Out the Storm
Tags: Beer and Food, Cooking, Dessert, Recipe, Thanksgiving