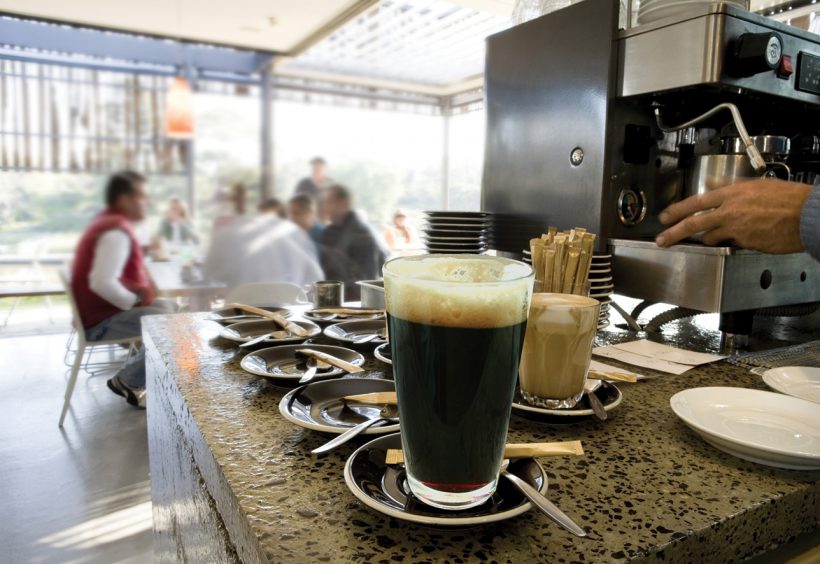 I have recently tried a few different beers brewed with coffee: Kona’s Pipeline Porter and Lagunitas’ Cappuccino Stout. I was wondering if/how much caffeine was present in those beers in comparison to a cup of coffee or Red Bull? Besides Sparks, can beer have caffeine? Please help. —Zack

Hey, Zack. Great question. Let’s start with whether beer can have caffeine or not. The answer is yes, and both of the beers that you tried do indeed have caffeine in them. They’re not just using coffee as a gimmick. They’ve got some buzz in them, to help make your downer an upper.

As for how much caffeine, that’s where it becomes interesting. For the sake of comparison, 8 ounces of coffee can have anywhere from 60–175 milligrams of caffeine, depending on the brewing method (drip, pressed, instant, etc.) and beans. A 2-ounce cup of espresso can have upwards of 50–100 milligrams of caffeine. An 8.3-ounce can of Red Bull has 80 milligrams and Sparks contains 87 milligrams of caffeine per 16-ounce can, but unlike Red Bull, Sparks Original also contains 6-percent alcohol by volume and it’s made with malt—along with taurine, citric acid, ginseng, water and some other crap.

And your referring to Sparks as “beer” is open for debate, but let’s save that for another day. Now that we have that as a base, let’s take a look at some real caffeinated beers. We used our awesome powers of persuasion here at BA to get the following.

Cappuccino Stout from Lagunitas Brewing Company has the equivalent of a shot of espresso per every 22-ounce bomber. So 50–100 milligrams if you drink the whole bomber.

LuvBuzz Espresso Stout from Cambridge Brewing Company has approximately 1/2 cup (about 8 ounces) of coffee per 16-ounce pint. Cambridge informed us that their coffee is brewed at normal strength, so let’s say around 120 milligrams—middle of the range.

Pipeline Porter from Kona Brewing Company has only 2 milligrams of caffeine per every 12-ounce bottle, from 100-percent Kona coffee. That’s pretty weak, caffeine-wise. You’ll need a better buzz before you hit the Pipeline on your board. Actually, according to Kona, you’d need to drink around three cases of Pipeline Porter to equal a typical cup of drip coffee.

And last but not least, Perkulator Coffee Doppelbock from Dark Horse Brewing Company has 65–81 milligrams per 16-ounce pint.

As you can see, the amounts of caffeine in coffee-infused beers can greatly differ, as do the methods of infusing the coffee. Some will add brewed coffee to the kettle, during fermentation; post-fermentation, some will play with adding whole beans, and I’m sure there are other methods too.

On a side-note, I dug around the internets and discovered that not so long ago, Nestlé filed global patents for “coffee-beer,” a fermented coffee drink that pours like beer, complete with foam and a powerful caffeine kick, but through the use of temperature controls they’ve arrested the formation of ethyl alcohol. Kind of cool, but beer with no alcohol isn’t beer in my book.

There’s also been a lot of debate about the mixing of these two stimulants—alcohol and caffeine—but to date, there hasn’t been any definitive answers as to whether or not it can be harmful. Ask your doctor if you have any concerns, as stimulants affect everyone differently. ■ 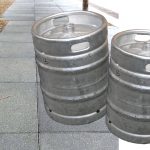 Previous: Keg-Worn Sidewalk Gets Tired Out 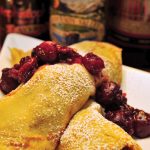