The Next Pint of Craft Beer: Is it Half Empty, or Half Full? 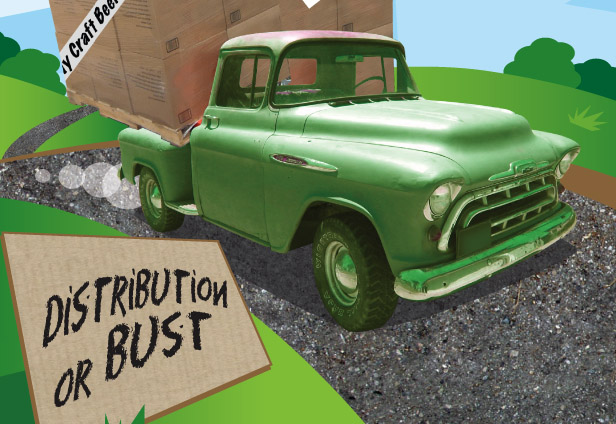 The drive from Chico, Calif., to San Francisco isn’t a long one. Maybe three hours. That is, unless the automobile of choice happens to be a faded green, 1957 Chevrolet pickup converted from a cable TV truck into a flatbed and weighed down by a pallet of Pale Ale.

It was 1980, and in the driver’s seat sat Ken Grossman. Still working in a bike shop to make ends meet because his beer business sure as hell wasn’t—and wouldn’t, for quite some time—Grossman was delivering the first commercial batch of what would become Sierra Nevada Pale Ale to his first distributor. And when he showed up, pulling the truck onto A&D Distribution’s lawn in the south part of the city, the crew laughed at him. “They’d never seen such a primitive brewer,” Grossman said.

In the 19 years since Grossman rumbled his six cylinders of sparkplugs and rust down Interstate 5—a full three decades after Jimmy Carter legalized homebrewing—the craft beer landscape bears little resemblance to its 1980 incarnation. But who had it easier: the groundbreaking veterans of craft beer’s early days, or the fresh faces popping up in today’s changed industry?

Grossman argues for the former. “There are many people who’ve had aspirations of being national brands,” he says. “It’s harder to jump through that window [now] than it was 10 to 15 years ago.”

Today, new brewers can’t hope to travel the same paths their first-wave (i.e., early ’80s) and second-wave (early to mid-’90s) predecessors did. Mass consolidation both on the wholesaling side and the production side conspire to keep craft beer off the shelves. A more crowded and talented marketplace looks to keep new beers out of drinkers’ hands. All the while, as the recession continues to batter the country, costs keep going up. “I’m just glad that we’re not trying to start now instead of 20 years ago,” says North Coast Brewing co-owner and marketing director Tom Allen.

Though others say it’s not that simple. Sam Adams founder Jim Koch recalls the challenges first-wave brewers faced in trying to break new ground. “It looks easy now [to run a successful brewery] because it’s been done,” says Koch. “You can look at what we all did and say it seems obvious in retrospect, but I can tell you it wasn’t, because a lot of guys didn’t make it.”

Koch’s first brewer was a carpenter and an art history major; today, professional brewing has become an occupation, not an odd job. An infrastructure of websites, magazines and large-scale festivals surround craft beer today. At their disposal, brewers now have new equipment and new styles that arose from the trials and errors (heavy on the errors) of the trailblazers. Grossman’s go-to bible, The Big Book of Brewing by British author Dave Line, was published before genres like the Double IPA were even invented.

Most importantly, there’s an energetic, informed consumer who’s more receptive to beers with more than, say, 10 IBU, or price tags that’ll run them more than a Corona, Koch says. And that knowledge has begun to creep into corners of the country that were once Big Three strongholds: In the South, craft’s growing right around 30 percent a year, according to Paul Gatza, director of the Brewers Association. Michigan, in Miller’s neighborhood, now enjoys one of the most vigorous craft cultures in the country.

But, as the boundaries have expanded, so have breweries multiplied. In 2008, the number of permits (held by breweries) to sell beer rose by more than 300, going from 1,700 permit holders with the Tax and Trade Bureau in 2007 to more than 2,000 in 2008, according to Gatza. Such a boom screams “another period of SKU [stock-keeping unit] proliferation,” Gatza says. In other words, there’s a whole lot less room at the inn.

These 2,000 breweries, around 90 percent of which are contract breweries and won’t reach past town limits, are all competing for what’s currently a 6-percent-by-dollars market share, according to Gatza. “It’s wonderful to be a drinker,” he adds, “and tough for the brewer.”

And now, the brewers face the standard of excellence imposed by the mid-’90s shakeout when a record 124 microbreweries closed—two years after a record 333 opened up—as growth fell from almost 40 percent to little over zero, according to Brewers Association numbers. Craft dusted itself off after the shakeout and the third wave of brewing began, defined by a new, industry-wide standard of quality and consistency. The days of the “gushing bottles by fly-by-night companies are long gone,” Gatza says.

But in a niche founded on edginess, the edge is getting harder to reach. Second-generation breweries bear slogans like “Off-Centered Ales For Off-Centered People” (Dogfish Head), or have bottles of beer that read, “We would suggest you stick to a safer or more familiar territory,” (Stone’s Arrogant Bastard), or produce a blood-red ale boasting 6.66-percent alcohol (Shmaltz’s Freaktoberfest).

“The question becomes, does the world need another craft brewer making generally the same styles of beer made better by people who’ve been doing it for 20 or even 10 years?” Koch says. “Does the world need another American IPA? Does it need another Brown Ale, another Hefeweizen or Oktoberfest? The major styles are currently made by American craft brewers who are leading the world in quality, so even the really good start-ups making a really good beer is one of many ‘me-too’s.’”

As the market grows and competition stiffens, the means of differentiation fall to branding and packaging. “It’s hard to get the individual brand to say, ‘This is why you should pay attention to us, this is why we’re not like everyone else,’” says Rich Doyle, founder of Harpoon Brewery and chairman of the Brewers Association. “It’d be extremely difficult if you came in with a great beer, but without much of a story behind the brand.”

And while the general consensus holds that packaging will not sustain a beer’s audience, it doesn’t hurt that Flying Dog’s packaging art is drawn by Hunter S. Thompson’s partner in crime, Ralph Steadman. “A great beer is just the price of entry these days,” says Flying Dog CEO Jim Caruso. “If you have an inconsistent product, you’re no longer in the game.”

But not everyone can land Ralph Steadman. And without a singular, compelling identity to pique the attention of distributors, companies can die in the brewhouse. Quickly. With the price of equipment and ingredients on the rise—2008 saw hops, malt and stainless steel shortages—this business has never demanded more capital. To assure cash flow, a company needs capable distribution, Doyle says.

“Wholesalers are necessary partners in building your brand,” he says. “It’s a critical step in the process.”

“I wouldn’t even say they’re secondary,” says Pete Giannopoulos, founder of Sly Fox Brewery in Phoenixville, Pa. “It’s almost as important as the beer itself.”

Historically, breweries have taken distribution where they can find it. Early on, and even still, distributors have shown reluctance to pick up craft names, opting more for the proven names of Bud, Miller and Coors. In 2002, Greg Koch, of Stone Brewing Company, was told by a wholesaler in Cincinnati that microbrews were done. The next year, Stone’s sales grew by 33 percent.

The first distributor in the Philadelphia area to pick up Sam Adams was a home-based distributor by the name of Smiler. One day, the distributor told Jim Koch he was excited about a promotion he ran, and sent Koch a videotape. Koch popped it into his VCR, sat down and saw a stripper holding a bottle of Sam Adams Boston Lager. The promotion was run at Visions, a gentlemen’s club in Philly. “He sold 20 cases in a night,” Koch says with a laugh, “which was a record.”

But now, because of countrywide consolidation among wholesalers and multinational merging among brewers (Miller joining with Coors, InBev purchasing A-B), it’s getting harder to secure any distributors, period. Some small-scale distributors are cropping up to fill the void left when mid-level companies are absorbed into the giants, but the pace isn’t keeping up with the perils of consolidation—although multibrand distribution by companies like Stone and Brooklyn may become more popular, Doyle says. According to a story in Reuters in April, there were more than 5,200 distributors in the mid-1970s. By 2006, that number had shrunk to slightly more than 2,000.

Those “megadistributors,” as Ken Grossman calls them, tend to block out smaller companies without a long, proven history. When they do pick up a craft beer, the focus tends to stay on the large-scale brewers, effectively defeating the purpose behind the craft brand. “There may be smaller brands who are buried in those houses who get consolidated,” Gatza says. “Those beers won’t see the light of day.”

With the consolidation on the brewing side, big brewers’ already hulking shoulders have become broader. When Bud released Bud Lime, it was in 85 percent of its target distributorships within two weeks, according to Gatza. Sam Adams doesn’t touch that kind of effectiveness, according to Jim Koch. And with brands like Blue Moon (Coors), Leinenkugel’s (Miller) and Bud American Ale forced onto shelves, true craft beers have fewer and fewer spaces.

Make no mistake: As Stone’s Greg Koch says, “This has never been an easy business.” Nor will it ever be. Ask any brewer how much can go wrong in the transfer from brew kettle to the fermenter and you’ve got a microcosm of the industry. No error goes unpunished, no shortcut unnoticed. That is, if you can even manage to sell the stuff in the first place.

But, for now, craft is picking up speed. A 4-percent-by-volume market share leaves vast expanses to grow into, and if the flair for innovation that pushed craft to where it is now doesn’t give out, expect more genres to bend and niches to form. And with the promotional efforts of organizations like the Brewers Association to keep the momentum going, the clouds begin to part, if just for a while.

If there’s one essential component that will keep American craft beer going, Jim Koch says, it’s something that was lost in the shakeout and can never be lost again. It’s the factor of madness, the kind of frayed relationship with sanity that drives a man to shear off a boom on the back of a utility truck, make it a pickup and drive it to San Francisco. 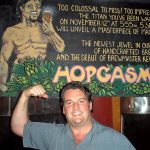 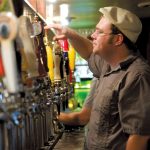