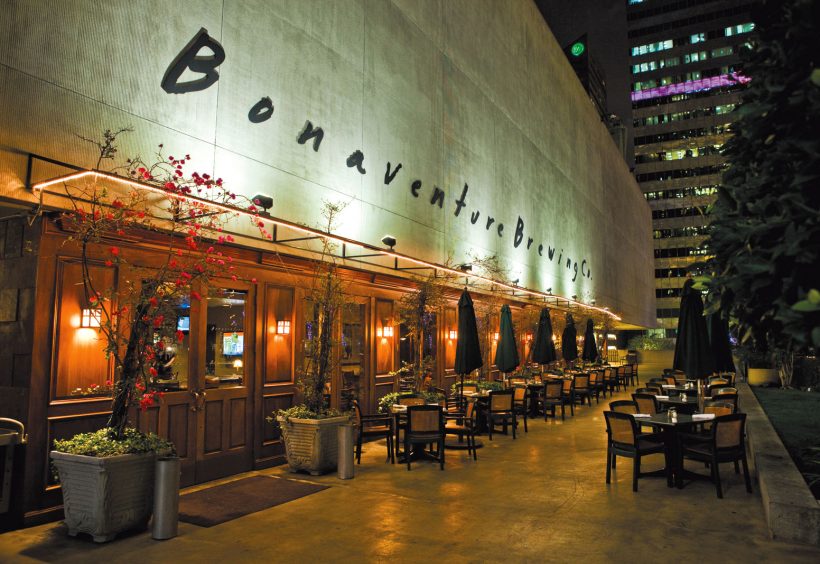 Downtown Los Angeles is many things; it’s home to world-class restaurants staffed with out-of-work actors, it’s the site of countless landmarks made famous by Hollywood, and of course, it’s a great place to spot/stalk your favorite celebrities. However, for everything it does have, LA is a veritable desert when it comes to craft beer.

San Diego, Southern California’s next-largest city, is riddled with breweries, but the City of Angels seems to be happy catering to the cosmopolitan crowd that prefers to drink, well, cosmopolitans. Perhaps that’s why downtown’s lone brewery has been flying under the radar for so long.

Located on the fourth floor of Los Angeles’ largest hotel, Bonaventure Brewing Company has been treating its loyal customers to craft ales for over a decade, while thousands of the city’s inhabitants walk by every day without even knowing it exists.

The First Pour
Like those pioneering Los Angelinos who managed to reroute water from the more verdant half of California to supply the arid southland, Bonaventure proprietors David Lott and David Hansen brought brewing to Los Angeles in 1998 when they opened Bonaventure on the pool deck/patio floor of the Westin Bonaventure Hotel.

While the setting provides plenty of challenges, such as very few walk-in customers as well as parking issues, operating a pub in an upscale hotel has its benefits. Head brewer Blackwell, who, like rock stars and Brazilian soccer players, goes by just one name, explains that the quality of food sets Bonaventure apart from the typical pub.

“Most of the brewpubs you go to are pizzas and beer,” Blackwell said. “A big concept in the industry is wood-oven pizza and beer, so [Bonaventure] is definitely unique because of that, and certainly the food is top notch here.”

Getting a 10-barrel kettle and a mash tun to match up to the fourth floor of a posh Los Angeles skyscraper was no easy task, as the equipment didn’t exactly fit in the elevator. But just like thousands of acres of privately owned farmland didn’t stop the construction of the California Aqueduct, a little problem like this wasn’t going to stop Lott and Hansen from building their brewhouse. A crane was brought in to lift the equipment onto the massive outdoor pool/patio area, and the brewery was constructed on the spot inside a picturesque glass building built around the equipment.

“It’s an eight-sided, round building out there, where you can see the tanks and watch the brewer,” Blackwell said. “It’s definitely a fishbowl brewing in there.”

Behind the Beer
Although he brews in a glass brewery, spotting Blackwell at Bonaventure is easier said than done. First off, one would have to get up pretty early to pay him a visit, as he is usually finished brewing by noon. Secondly, Bonaventure only brews about 200 barrels per year, which means Blackwell is only at work a couple days each month.

This is the part where anybody with a basic understanding of math begins to question how a brewpub that only sells 200 barrels of beer a year stays in business, but the restaurant has survived for over a decade because of the vast amount of convention-goers who stay at the hotel—even if they are drinking wine and martinis.

“We’re in a hotel and we’re on the fourth floor of the hotel, and people don’t walk by and see us,” Blackwell said. “We’re not on the street. People don’t think about it necessarily, unless they’re staying in the hotel.”

As a result, downtown Los Angeles’ only brewery is also one of its rare secrets. In a city where a celebrity can’t take out the garbage without making the tabloids, the fact that word hasn’t gotten out about Bonaventure seems astonishing. Instead, Los Angelinos are left guessing when pleasant aromas start wafting down from the pool at the Bonaventure Hotel.

“I make downtown smell really good,” Blackwell said. “When you’re boiling 300 gallons of wort and people walk by and say: ‘What is that? It smells like breakfast,’ that’s kind of fun.

“Thousands of people go to downtown Los Angeles. This place is surrounded by skyscrapers, [and] the tallest building on the West Coast [the Library Tower] is a block away. All these people go downtown, mostly lawyers, insurance actuaries down there in the financial district—they’re all doing that and I’m making beer. It’s kind of fun to be doing something different than everyone else down there.”

Blackwell has been brewing for Lott and Hansen at the two establishments for 11 years now, following a stint at a brewpub in New Mexico for a couple of years. But his life wasn’t always focused on beer, as the Minnesota native took a strange path to brewing.

“I just continued to [brew] as a hobby while I went through some other careers,” he said. “I taught middle school and high school for a while and hated that. Basically I floated for a while, until I got a job making beer. Now I plan to do this for the rest of my life.” What’s Brewing
Blackwell’s approach to beer at both brewpubs is straightforward and seems to focus around one word: “wholesome.”

“They’re all my kids, but at the same time, I’m a Pale Ale drinker. You won’t see me sitting down drinking a pint of Stout,” he said. “I appreciate the style and I taste my Stouts, but I don’t sit down and drink one very often.”

At both locations, Belmont’s Strawberry Blonde is a regular on tap, with Bonaventure offering a Pale Ale, a Blonde and a seasonal to serve out of their three serving tanks. In addition to the Strawberry Blonde, Belmont offers a Blonde, an Amber, a Pale Ale and a Stout, named Long Beach Crude after the town’s oil-drilling industry.

While both breweries have similar offerings, Blackwell maintains that the beers are unique to each location.

Specifically, Bonaventure’s Pale Ale features crystal malt as part of its grist, while Belmont’s is strictly comprised of two-row barley. And of course, the water used at each brewery necessarily contributes unique characteristics to the brews.

As singular as they may be, these “wholesome” and straightforward ales remain hidden in the glitz and glamour of Los Angeles’ bar scene. Perhaps if word spreads, Blackwell will have to spend more time at Bonaventure, and with a working view of the skyline in the city where there’s never a rain delay, that might not be such a bad thing.

What He Said
“Even if they’re drunk, to have [customers] say, ‘Oh, this beer is so good’ … it lifts my heart to see people enjoying it. That’s the nice thing about working in a pub.”
– Bonaventure/Belmont head brewer Blackwell ■ 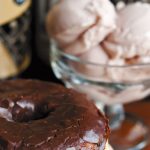 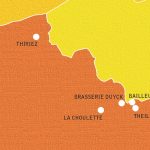