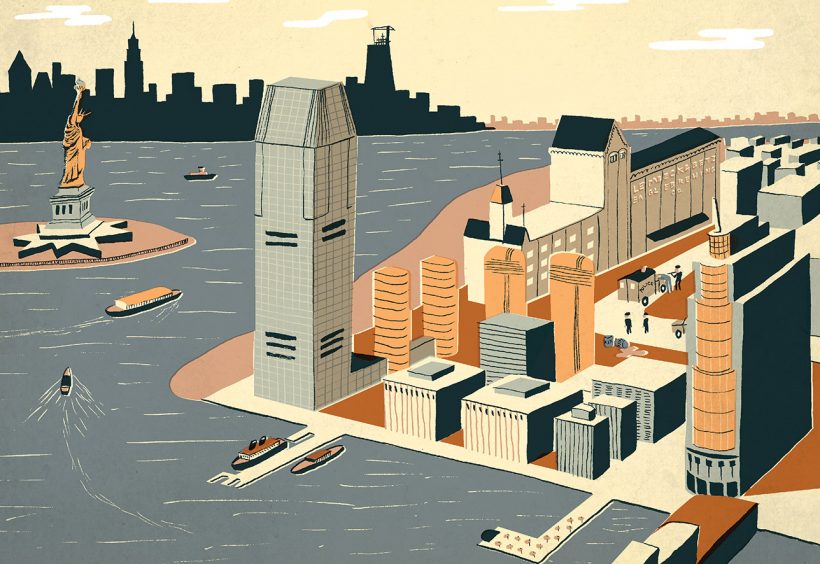 Jersey City hasn’t always been a craft beer town—more of a “beer and a stab” town, a phrase used by beat cops during the rougher years. Indeed, Jersey City’s beer history is colored with corruption, crime and politics.

Take The Lembeck and Betz Eagle Brewing Company. Established in 1869 by Henry Lembeck and John F. Betz (who became a millionaire beer baron after apprenticing under his brother-in-law, David Yeungling, founder of the Yeungling & Sons Brewery), the brewery took up 17 city lots, making it the fourth largest brewery in New Jersey at its peak. During Prohibition, the brewery was turned into an unsuccessful refrigeration company; after being abandoned in the 1960s and becoming a haven for vagrants in the crime-ridden area, it was finally added to the National Register of Historic Places in 1984. Owned by the city, it bounced around to various developers, sometimes under shady no-bid circumstances. There were arson attempts on the brewery, as “burning out” was a common practice in those times. Eventually, the brewery buildings were bulldozed, and the spot became the Golden Door Charter School.

These days, investors are flocking to Jersey City, flipping dilapidated buildings into new lofts and townhomes. Twenty- and thirtysomethings are moving in, drawn at first by the area’s proximity to New York City, but sticking around for Jersey City’s own flourishing arts and culture scene—which, of course, means craft beer bars are popping up on every corner, and events organized by the local homebrew club aren’t hard to come by either.

Barcade Jersey City
Barcade, the arcade/bar that features 24 drafts, one cask of American craft beer and 37 vintage video games, opened its second location last year. “Jersey City presented a great opportunity for us to be a part of a cool downtown that was about to really take off in terms of craft beer,” says co-owner Paul Kermizian. “People want more.” Also: late-night happy hours.

HopsScotch
HopsScotch stays true to its slogan (“Where recess meets happy hour”) with board games, in addition to the 40 drafts and a bottle list that focuses on vintage and collaborations, listed as “Belgians, Bombers and Boutiques.” There are also 40 Scotches. Co-owner Luke Gomez says he was tired of not being able to watch sports and drink at a craft beer bar at the same time, so the bar’s TV’s are usually tuned into sports games.

Iron Monkey
With weekly “Meet the Brew” events, 39 drafts spread through out its three floors (including a rooftop bar with views of the NYC skyline), over 400 bottles and Beer Speed Dating, Iron Monkey is a beer-pushing machine. Don’t miss the lunch special—$10 for food and any draft beer. Soon, they plan on doubling the size of the rooftop bar to make it an open-air entertainment venue.

Jersey City Brew Club
jerseycitybrewclub.org
Jersey City’s only homebrew club started less than two years ago as a barebones Facebook page, but has since grown to about 20 active brewers and 100 supporters. They meet monthly at Barcade, and have bimonthly “Drink Our Suds” events, when members open their homes to the public to drink their beer for free. In the fall and spring, they organize the “Jersey City Homebrew Tour,” a walking tour of the members’ houses, showcasing each person’s homebrew setup and featuring samples of their homebrews. The club also organizes the annual people’s choice homebrew competition at the 4th Street Arts & Music Festival, and they plan on starting a communal hop garden at Bright Street Community Garden.

Light Horse Tavern
This upscale pub and restaurant is housed in a restored historic building in the Paulus Hook neighborhood, near where Henry “Light Horse Harry” Lee III captured 400 British soldiers under the direction of George Washington. In addition to its high-end wine list, it has an international selection of 61 rotating bottles and 12 drafts, including Light Horse Kick Ass Brew, its house lager made by a secret brewery in South Jersey. Don’t miss their house winter seasonal, Dark Horse Porter.

LITM
140 Newark Avenue
litm.com
Despite being equipped with only a Kegerator and limited refrigerator space, this art gallery/restaurant more than makes up for its lack of lines with its enthusiastic beer spirit—it still manages to rotate its selection and has over 40 bottles. There are art openings on Tuesdays, and every Wednesday is “Jersey Wednesday: Swallow Your Jersey Pride,” with specials on all New Jersey beer. LITM hosts regular New Jersey Beer Co. events, as well as one-off beer events like a beer and vinyl night with Sixpoint DJ Jersey Dan. Brewery reps are frequently enlisted to DJ.

Marco and Pepe
289 Grove Street
marcoandpepe.com
This quaint hipster bistro is said to have the best brunch in town. Their 50-plus bottle list includes a lot of harder-to-find imports, and one of their four drafts is reserved for their house beer, Marco and Pepe Ale, an ESB brewed by Climax Brewing Co. in Roselle Park, N.J. Flights are $8.

Pint
This hole-in-the wall gay bar is one of the best and cheapest beer spots in town. The building is the longest continually operating bar in town, most likely the state, according to owner Wolf Sterling. It’s been a bar since 1910 and, located just across the street from City Hall, is said to have been the private drinking den of Mayor Frank “The Boss” Hague during Prohibition. Now, Pint serves up 14 American drafts and nearly 40 bottles. “Nothing in the bar stays for more than three weeks,” Sterling says, which is why every Sunday, all bottles are only $3. It also has a collection of 600 vintage and obscure tap handles, which Sterling has turned into artwork decorating the bar.

Skinner’s Loft
This elegant three-floor restaurant was one of the first to take pride in its beer selection. It has a four-line stand reserved for Belgian styles, and another five lines that rotate “for anything seasonal or interesting,” according to manager Will Kelly. Bottles include daily specials, like imports from Japan and Iceland. Skinner’s also features an extensive Scotch, Bourbon and Amaro selection.

White Star Bar
White Star is a perfect example of a neighborhood watering hole/sports bar transitioning into a decent beer bar with an affordable menu (that includes $6 dinner Wednesdays). It has 13 lines, half of which rotate, and $1 off all beers on Friday nights.

Zeppelin Hall
Zeppelin Hall, located in the Liberty Harbor development, focuses on German styles with 144 drafts and a variety of flight selections. The sprawling outdoor biergarten also has projection screens for sports games. ■ 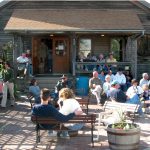 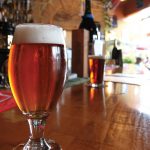