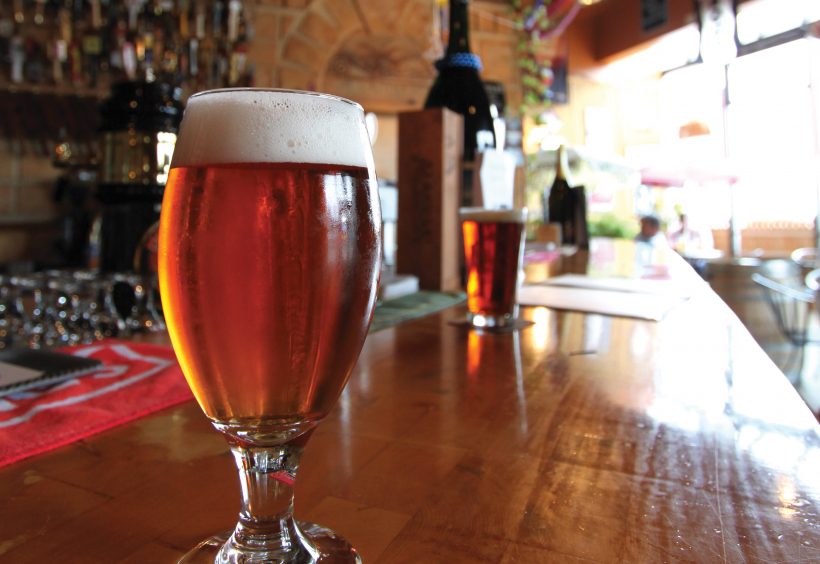 A state of stunning landscapes and untamed wilderness, Alaska is often forgotten when surveying America’s craft beer boom. But from breweries that have been around for almost two decades to those that just celebrated their first anniversary, great beer and great people can be found in every Alaskan city. I didn’t know what I was getting myself into when I planned a two-week trip up to Fairbanks, down to Homer and everywhere in between, taking photos along the way. But 1,800 miles, 15 breweries and brewpubs, seven bars and 2,144 photos later, I had discovered without a doubt that craft beer has not been lost upon the last frontier. Beers from Silver Gulch Brewing Co. at Cafe Amsterdam (top), Kassik’s Kenai Brew Stop at Humpy’s Alehouse and Alaskan Brewing Co. at Seward Alehouse. Even at dives, it’s easy to find a local offering, if not a few. And considering how difficult it is to travel to all the breweries in the state, having so many Alaskan beers at hand at a local bar is all the better. The brewhouse at Silver Gulch, just north of Fairbanks in Fox. It’s been open since 1998, and takes up 12,000 square-feet, with an expansion in the works. Head brewer Levi Hansen moved here three years ago for the job. He makes beers with Northwest hops profiles, as well as locally inspired beers, like his Hip-Hop Wit, made with rose hips that grow everywhere in the state. Just a few miles north of the entrance to Denali Park and the touristy Glitter Gulch sits 49th State Brewing Company, with a board full of fresh beers from brewmaster Jason Bullen, a warm fireplace in the middle of the room and a wide selection of whiskeys. Parked in the expansive front yard, among cornhole boards and a bonfire pit, is a replica of the bus from the Into the Wild film, for those who don’t want to risk the 20-mile hike into the middle of the wilderness to see the real thing. Sassan Mossanen and Boe Barnett started Denali Brewing Company in 2009. After brewing on an 8.5-barrel system inside Twisted Creek Restaurant, Denali moved the brewery to a 5,000 square-foot building a few miles down the road last year, where they just started canning their Single Engine Red. They’re also planning to open up a tasting room there in March. They still brew limited batches on the small system at the restaurant in downtown Talkeetna, where they also run a tasting room and beer garden. And just down the street is a great view of Mt. McKinley. Kevin Burton started brewing at Glacier BrewHouse when it opened in 1996. After leaving to brew elsewhere, he later returned to Glacier. Burton brews local favorites like Big Woody Barleywine, an Eisbock and an IPA, and has 50-60 barrels filled with various beers on site. Located in Juneau, in southeastern Alaska, Alaskan Brewing Co. isn’t the easiest place to get to. Luckily, you can find their beer just about anywhere, whether it’s among lumberjacks and giant cabbages at Alaska’s State Fair, or on tour boats cruising to the Kenai Fjords. Alaskan is one of the state’s oldest breweries; they got their start in 1986 and have been collecting medals for their beers ever since. Their branding is not to be underestimated either—Alaskan hoodies are virtually ubiquitous, especially among the tourists who crowd Anchorage’s downtown. Midnight Sun Brewing Co. opened in Anchorage in 1995, and 14 years later, moved to their current location, which features a loft—a great place to grab a bite and sample beers like Brewtality Espresso Black Bier from head brewer Jeremiah Boone. Breweries are limited to serving 36 ounces per person for on-site consumption, one of Alaska’s few quirky beer regulations. Many breweries will sell their beer to a restaurant that they share the space with in order to circumvent these laws, but at least they can sell up to 5 gallons in growlers, bottles or kegs to go. Breweries also have to stop serving by 8pm, cannot have seats at the bar or provide entertainment like TVs or darts. Good thing the beers are so good. When Greg Mills graduated brew school at UC Davis, he literally drove straight to Sleeping Lady Brewing Co., where he’s now been brewing for five years. A one-man show (with some help during summer’s busy season), Mills has revamped the beer list during his tenure, tweaking old recipes and adding new ones like TINY!, a 3.5-percent IPA. Below Sleeping Lady’s brewhouse sits a basement full of barrels and Brett—the home of Anchorage Brewing Co., which opened in 2011. Founder Gabe Fletcher, who brewed at Midnight Sun for 13 years, exclusively makes barrel-aged and sour beers, and has already brewed collaborations with Mikkeller and Gigantic Brewing. The newest kid on the block, Seward Brewing Company opened in downtown Seward in August 2012. Glacier BrewHouse’s Kevin Burton was brought on to help owner Gene Minden get the brewhouse going. Four styles (a Red, White, Golden and an IPA) were put on tap as an easy beer introduction to a town with a small craft beer presence, and Burton also has a Stout in the fermenters. It wasn’t a planned stop on the original itinerary, but after being recommended by more than a few Anchorage people, Soldotna’s St. Elias Brewing Co. lived up to the hype with delicious pizza and beer pairings, like The Farmer’s Friend American Pale Ale and the Peter Rabbit veggie pizza. Owner/brewer Zach Henry keeps the beers rolling out from his 7-barrel brewpub with around 10 beers on tap, including cask-conditioned ales on Firkin Fridays. The Homer Brewing Company was the first brewery on the Kenai Peninsula, and owners Steve McCasland and Karen Berger aren’t planning on going anywhere. Literally. Homer brews for the coastal town of Homer, and it’s as far as they plan on distributing these days. On Mondays, McCasland fills his kegs by hand, dry hopping and hammering the casks closed. Everything they do is hands on, from delivering kegs around town to ordering reusable bottles to sell in their taproom. It’s a good thing space doesn’t tend to be an issue in Alaska, because Kenai River Brewing Co. has been growing. They’ve expanded their space to open a new tasting room, and after canning their Skilak Scottish two at a time for long enough, owner/brewer Doug Hogue says they’ll be getting an automated canning line soon. Another newish brewery in Anchorage, King Street Brewing Co. was started by Dana Walukiewicz and Shane Kingry just over a year ago. They serve common styles in their taproom like Ambers, Blondes and Stouts, but the chalkboard lists something different: blends. Want a Black IPA? They’ll pour a glass of their IPA and Stout together. Brewing Together in the Great North
Homebrewing was legalized in Alaska in 1989, but the Great Northern Brewers Club of Anchorage had been gathering since 1980, with early meetings taking place in a mill feed and garden warehouse. Today, the GNBC (which officially incorporated in 1995) has just under 200 dues-paying members, with monthly meetings (except during summer) and larger social gatherings happening throughout the year.

Tim Strayer, the club’s current president, has been homebrewing for only a few years, and it was his move to Anchorage that got him started. Strayer relocated to Alaska for work about five years ago. One day, he was driving down the road and spotted the homebrew supply store—you can guess the rest of the story.

It seems that Anchorage, and Alaska in general, has a beer bug floating around that people seem to catch. The more likely story is that the congenial beer community just naturally pulls people in. GNBC is a great example. It hosts five homebrew competitions a year, each one sponsored by a brewery or bar in town. The sponsorship means that a winner from each competition gets to brew their beer on the larger system at the brewery. Lee and John Boyd won the most recent competition, the Anchor Town Invitational Home Brew Competition, with their Belgian Witbier; King Street Brewing, the competition’s sponsor, will be brewing up the Boyds’ recipe this season.

The strong connection between homebrewers and professional breweries is due in part to so many of the brewers in Alaska having started out as homebrewers … and they’re not quick to forget their roots. To celebrate their one-year anniversary, King Street gave away a batch of wort to anyone who showed up with a clean carboy. According to Shane Kingry, brewer and co-owner of King Street, that ended up being 44 carboys worth of fresh IPA wort.

Supplies don’t always come easy in a state that’s bordered by Canada and a lot of water. Anchorage’s Arctic Brewery Supply is a local favorite, and not only provides supplies for homebrewers, but for breweries as well. It’s also common for homebrewers to approach breweries for supplies, piggybacking their order with a larger one, or grabbing some extra yeast.

As membership in the GNBC grows each year, the club’s officers are working to make the most of their critical mass. According to Julie MacDonald, the club’s secretary and social media savant, that means focusing on the educational value of the club—they try to have an educational component at every meeting, sometimes inviting speakers, and they host homebrewing tutorials for all levels. They also want to increase Alaska’s presence at national competitions, where Juneau’s Alaskan Brewing Co. typically takes home the medals.

This time of year, as the days grow shorter and the air colder, Alaska’s homebrewers are unpacking their electric blankets and aquarium heaters, two common methods of keeping beer warm during fermentation, which isn’t easy—then again, these homebrewers don’t seem to mind a challenge. ■ 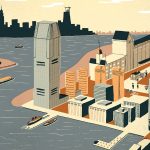 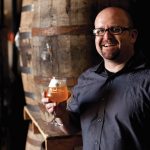