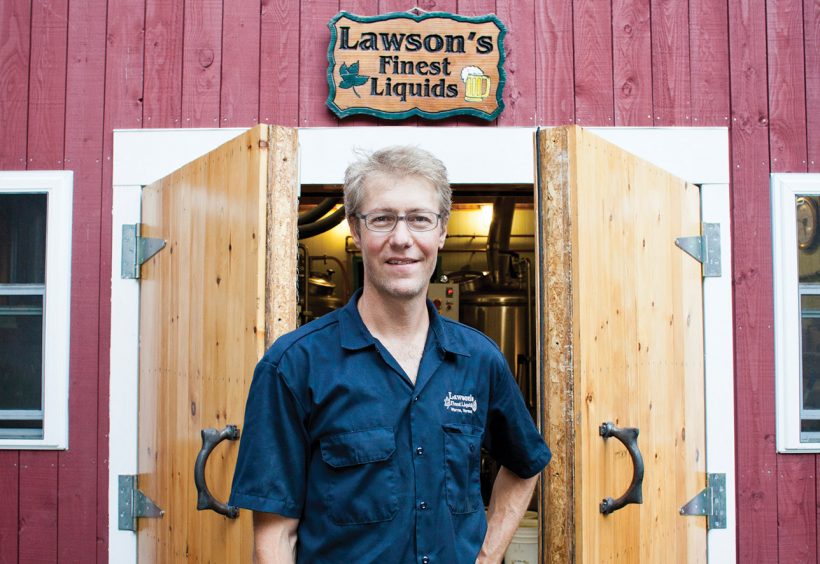 Sean Lawson poses for a portrait outside his home-based microbrewery, Lawson's Finest Liquids, in Warren, Vemont. | Photo by Monica Donovan for the Boston Globe

Sean Lawson can brew, at most, around 600 barrels of beer per year. He is his only employee. He distributes his beers to a handful of local bars, bottle shops and farmers markets. He doesn’t do tours or sell bottles out of his brewhouse, which sits on the side of a Vermont mountain. Despite all that, his brewery, Lawson’s Finest Liquids, has built a cult following of beer drinkers clamoring for all the IPA and Maple Stout he can produce. He can’t make nearly enough for them. “That’s the hardest part, saying no,” Lawson says. “There’s so much pressure to expand. That’ll always be a question for us, how small is small enough? For me, it’s not about trying to grow the business. We have a successful small business that leads to the right quality of life.” Drink it, if you can.

1. Ditch the stack
In the beginning, there was cheap beer. It came in cans, and Sean Lawson and his college buddies would collect them, then return them for the deposits—beer money. That all changed when one of Lawson’s friends brought over some homebrew. The beer stood out, because it was full of flavor. “Before that, I didn’t have any idea that you could make beer yourself and have it be good,” Lawson says. A couple weeks later, Lawson was brewing up his first batch of beer in his Burlington, Vt., apartment. It was a Maple Wheat, and he was absolutely hooked.

2. Appreciate the art
Lawson jumped all over homebrewing as a hobby, but it took him nearly two decades to see brewing as a viable career path. He struggled to see the brewing industry as “a worthy enough calling,” he says. “It seemed to be a loftier profession to be a scientist or educator than to be a brewer.” It took Lawson years of brewing at home to see it as more than a hobby. “Over time, I’ve really come to appreciate the artisan side of brewing beer. It’s a true art form and a craft. There’s something magical about creating something yourself that you can enjoy.”

3. Ease in
The homebrew habit stuck with Lawson, from that first batch in college straight through the 2008 founding of Lawson’s Finest Liquids in a building next to Lawson’s house. But it took years of prodding from family, friends and strangers to convince Lawson to make the jump and go pro. Even then, he hedged. He launched Lawson’s Finest as a 1-barrel part-time nanobrewery, both because he wasn’t ready to charge forward without the income from the jobs he already held, and because he was concerned that making a full-time job out of brewing might sap his passion for the craft. The opposite has been true, and in the fall of 2011, Lawson jumped up to a 7-barrel brewhouse.

4. Stay hands-on
Lawson jokes that his original 1-barrel brewhouse ran like a “licensed, glorified homebrew operation.” But even in 7-barrel batches, Lawson’s Finest has retained its DIY feel. Lawson’s wife, Karen, and a volunteer assistant, help the business part time, but he is the brewery’s only employee. He brews in a tiny, 280-square-foot building outside his house, which he built for the brewery, and handles each beer, start to finish. “Making the beer myself is the part of the process I love the most, so I have no plans to grow the brewery in the near term,” he says. The setup also allows him to spend time with his two daughters. “At this point in my life, I’m not very interested in managing employees and running a company. I love the process. I get excited about getting into the brewhouse and making great beer myself.”

5. Change it up
The physical constraints of Lawson’s brewhouse—it holds a 7-barrel system, three fermentors, and not much else—put a hard cap on the output at Lawson’s Finest. Given that, Sean Lawson didn’t want to put any other restrictions on his production. Lawson’s Finest doesn’t hew to a set product line. Lawson cycles through four to six batches per month, but he determines the contours of that lineup on the fly. It changes constantly. He normally has a maple or other specialty beer, along with an IPA and a Double IPA, in circulation, but he’s also frequently playing around with seasonals, experimental beers and one-off specialties. There’s no flagship recipe hogging fermentor space.

6. Revel in your roots
Maple beers from the Vermont Pub and Brewery and the Catamount Brewery helped cement Lawson’s love of craft beer, and Lawson now keeps recipes showcasing the ingredient—mainly American Strong Ales and Stouts—in constant rotation. “I’ve never viewed it as an adjunct,” Lawson says. Like honey, maple syrup ferments out completely, so it lightens a beer’s body while boosting alcohol content. Lawson has spent years trying to carry maple flavors from the kettle to the bottle. His maple beers have full malt bases that leave the impression of sweetness at the finish, and he mashes at higher temperatures to leave residual sugars in the beer. “It’s a real Vermont-y ingredient,” Lawson says. “I like that there aren’t a lot of maple beers out there. I get to carve out that niche.”

7. Push boundaries
Maple Tripple, a recent World Beer Cup silver medalist (it took home a bronze in 2010), carries Lawson’s maple affinity to the extreme. The beer is brewed once a year, at the end of the maple harvest, with the final runnings from sugar maple trees. Lawson uses the sap in place of brewing water, so the beer is loaded with fermentable sugars before any malt hits the mash tun. “The mash can be a real bear, it gets so thick and syrupy,” Lawson says. He takes the edge off the beer, which clocks in around 12-percent ABV, by aging it for a year in maple liqueur oak barrels. The aging mellows the beer’s alcohol bite, brings out oak tannins and vanilla notes, and adds maple flavor to the finish.

8. Treat yourself
“I’m unabashedly a hophead,” Lawson says. “Many of the ales we put out are really hop forward and full flavored.” And Lawson’s customers devour his IPAs as readily as he does. Lawson has a number of standbys he cycles through, including Chinooker’d, a rugged American IPA brewed with Chinook and Columbus, and Triple Play, a juicy IPA brewed with Citra, Simcoe and Centennial. He also takes advantage of his malleable lineup to create new plays on the style. This summer, he dabbled in seriously hoppy session beers. He just released Kiwi Double IPA, a recipe loaded with the New Zealand hop varieties, and he has his eye on a number of single-hop expressions of new experimental hops. With only three fermentors, “I can’t make everything all the time,” Lawson reasons. So he may as well play around and experiment.

9. Paint it on
“It’s no secret that Citra is the wonder-hop of a lot of recipes these days,” Lawson says. This category includes Double Sunshine, Lawson’s wildly popular IPA. But the real difference-maker, Lawson believes, is his well water. It’s very soft and low on minerals. Lawson calls it “a blank canvas” that creates beers with “really clean flavor.” Onto that canvas, Lawson layers Carapils and flaked oats, which beef up the soft water’s thin mouthfeel, and provide a backbone for those juicy, juicy hops. ■ 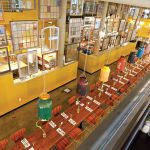 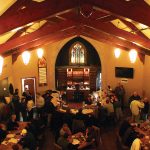