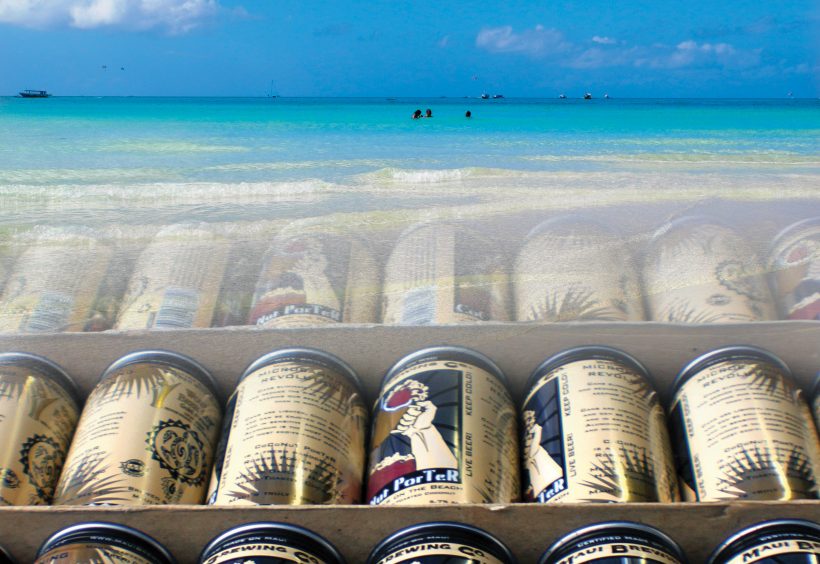 Every Sunday, Jason Wood climbs into his 5-barrel brewhouse at Great Deep Brewing Company—just a few blocks from a picturesque tropical waterfront—and makes another batch of one of America’s most isolated craft beers. Like many domestic brewers who explore emerging styles and seasonal flavors, Wood has brewed a Cascadian IPA, a spiced Pumpkin Ale and a Dark Chocolate Espresso Stout. As head brewer at the only brewpub on the US territory island of Guam, however, Wood’s hops, malt, yeast and adjuncts had to travel nearly 6,000 miles to find him.

“Ordering supplies is horrible,” says Wood’s dad, Rick, a homebrewer from Kansas who co-founded Great Deep in 2001, several years after his Air Force career ended and he decided to stay on the tiny South Pacific island. “If we need grain, we have to have a month lead time because it takes several weeks to ship. … Shipping is really expensive coming from other places, like Australia, so we have to buy from the mainland.”

Couple the costly and time-consuming supply chain with Guam’s rising gas and power costs, and a population that still gravitates toward the more readily available Bud and Miller bottles, and one wonders why anyone would even bother brewing in such a remote location—especially after the 2002 typhoon and 2006 fire that forced Great Deep to entirely rebuild twice.

“It’s an illness,” Rick Wood says bluntly. “But we want to brew everything here.”

Despite not raising costs on its beer since it opened, Wood keeps his overhead lower than most mainland breweries by making small batches exclusively for on-site consumption. That means no kegging, no distributing and definitely no bottling, which would require empty glass bottles to be shipped across the Pacific Ocean first, a venture that is prohibitively expensive. But while Great Deep has no plans for expansion and is content making ends meet as a small-time, Guamanian brewpub, many other companies who decide to make beer in offshore US locations want to grow their business and bring their local products to consumers on the mainland.

For many breweries in Hawaii, the Virgin Islands and Puerto Rico, distributing bottled production beers stateside means relying on the oft-debated practice of contract brewing. “In 1997, when I came on board, there were a lot of things that [the company] had not thought about,” says Mattson Davis, president of Hawaii-based Kona Brewing, whose beers are now distributed in 36 states plus Washington DC, and throughout Europe and Japan.

Most consumer products in Hawaii are imported from overseas, including all of the brewery’s ingredients and materials, which were being shipped in from West Coast ports under the 1920s Jones Act (a law dictating that any product delivered between two US ports must be delivered by a US-built, -owned and -staffed ship).

Because the American shipbuilding industry has waned over the years and American maritime workers have higher wages than those in many foreign countries, Davis estimates that the cost of shipping containers to Hawaii is probably three times what it is between international ports. According to Davis, a grain shipment alone costs $5,000 more for an island brewer than it would for a brewer in Long Beach, Calif., where most Hawaii-bound ships originate. 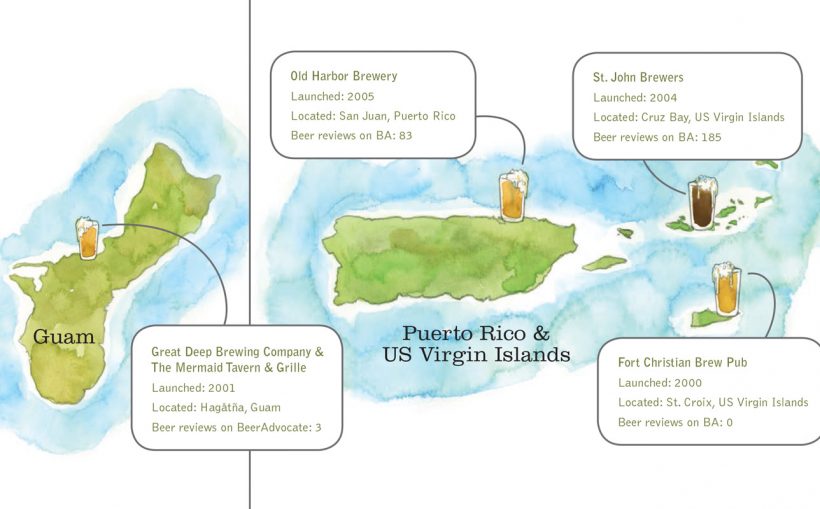 An energy audit that Davis issued also evaluated the brewery’s environmental impact. “In order to be a good partner and steward to our islands, it didn’t make sense to make it all here,” Davis says. “To meet demand for our product, it was clear we needed to find partners.”

In 1998, Kona teamed up with Craft Brewers Alliance (CBA) and began—under direction of Kona’s head brewer—making several of its year-round beers at contract facilities on the mainland, a move that allowed the brand to expand to more than 200,000 barrels per year (in 2012) while keeping its prices competitive. In 2010, they became a fully owned subsidiary of CBA.

St. John Brewers—the only brewery in the US Virgin Islands—came to a similar contract-brewing decision when it decided to bottle on a larger scale. “Our brewery started out of the back of pickup truck,” says Chirag “Cheech” Vyas, St. John’s co-founder and co-brewer. They hand-bottled and self-distributed until demand for their beers became difficult to meet.

But living on a Caribbean island with limited water and energy resources (not to mention astronomical land prices), Vyas and his partner, Kevin Chipman, knew their ability to produce more was hindered. So they reached out to Shipyard Brewing Company in Portland, Maine, which now contract brews and bottles four St. John beers, sending them back to the Virgin Islands along with additional grain and supplies, which further reduces shipping costs for the distant US brewery.

“We are still part of the American craft beer scene, though we struggle to be recognized,” says Chipman, who along with Vyas is originally from the Northeast. “Having bottles [in the mainland market] ties us back into American beer.”

Today, all of Kona and St. John’s bottles distributed for mainland consumption come from their partner contract breweries, which for Kona includes three different CBA facilities across the country. Both companies maintain island breweries as production facilities for all the draft beer distributed locally, and both produce dozens of small-batch beers that are only available on site.

Though Davis says Kona took a lot of heat for the decision to contract brew at the time, he notes that in the last few years, breweries are increasingly cozying up to the multi-brewery approach. Sierra Nevada and Green Flash, to name a couple, are building East Coast facilities, proving that large producers are looking to decrease their costs and environmental impact while still providing beer to faraway consumers. “Origin is incredibly important, and Kona is from Kona, Hawaii,” says Davis. “But source is not as important because I am not going to contribute to the dragging of products all over the world.” 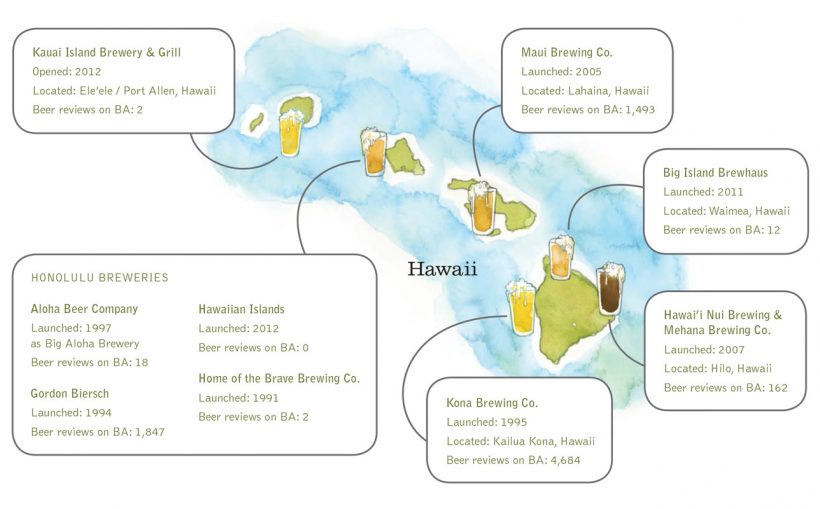 One far-flung brewery that has managed to minimize its environmental impact without going the contract-brewing route is Maui Brewing Company, which is the only brewery in Hawaii that currently produces and packages all of its mainland-distributed beer in Hawaii. Owner Garrett Marrero and his now-wife Melanie Oxley bought an ailing West Maui brewpub in 2005 and founded Maui Brewing in its place.

Despite the fact that, according to Marrero, production costs have nearly doubled since Maui Brewing first opened (blame the rising gas prices), the brewery made just under 20,000 barrels of beer on the island last year, most of which was made at its Lahainatown facility where it was kegged, canned and distributed to accounts in Hawaii, 10 mainland states and five countries.

“It might be cheaper to brew on the mainland, but we believe craft beer is about integrity, it’s about innovation, and it’s about sense of place,” says Marrero. “By empirical data alone, we shouldn’t be successful, but that doesn’t factor in the heart behind what we do. We are committed to keeping [production] here.”

Maui has found workarounds for the increasing costs of producing beer on an island with limited resources, including installing solar panels and canning beers instead of bottling, which invigorates Hawaii’s manufacturing economy (the cans are made on Oahu) and also reduces shipping weight to the mainland. Marrero also isn’t afraid to shell out for more expensive local ingredients—such as $11,000 for the Big Island Chocolate he recently used in an Imperial Coffee Stout—and charge consumers what the beer is worth, meaning that some of Maui’s specialty cans cost up to $17 for a six-pack.

Customers don’t seem to mind, though— all of Maui’s beer is sold before it’s even brewed, and earlier this year, the company announced they’ll be building a $15 million, 41,000-square-foot production facility and brewpub in Kihei that will more than double capacity and give other local brewers a turnkey place to make more Hawaiian beer.

With nine craft breweries in the state already (by far the most of any water-bound US territory) and six more listed on the Brewers Association website as “in planning,” Marrero sees an even richer Hawaiian beer scene in the works, one that is leaning toward building a market for authentic local beer on the islands rather than dealing with what he sees as the ethical dilemma of contract brewing for mainland consumption. 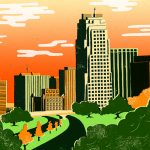 Previous: Where to Drink in Raleigh, North Carolina 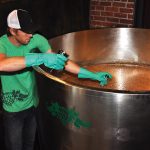