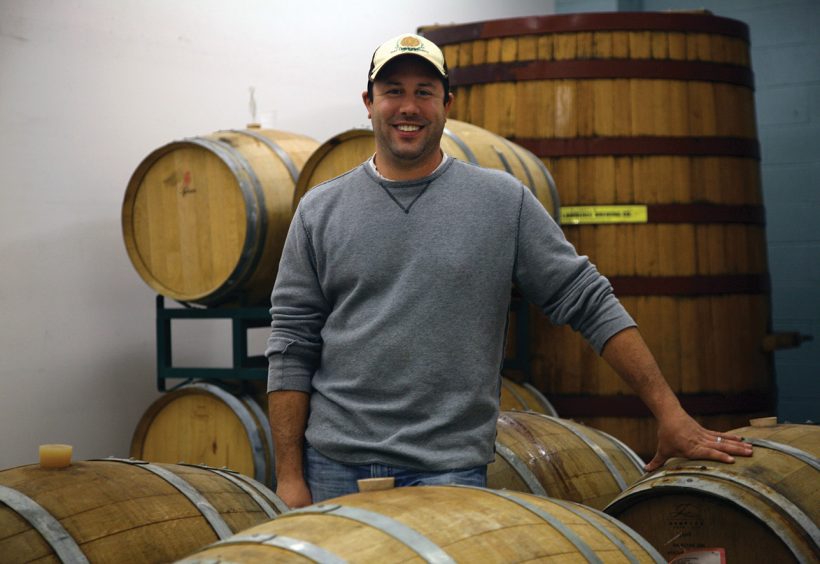 Scott Vaccaro learned to brew like a pro at the biggest institutions in California brewing, but the Captain Lawrence Brewing Company, the brewery he founded nearly eight years ago, is strongly rooted in his Westchester County, N.Y., hometown. His award-winning barrel program is built on oak he sources from local winemakers and distillers. The brewery itself is named after the road Vaccaro grew up on. He no longer has carboys littered around his parents’ living room, threatening to explode, as he did when he was 17. But the beer he makes, first and foremost, still tastes like home.

1. Make your own
It started with a funky smell in a friend’s kitchen. Scott Vaccaro walked in and saw his buddy’s dad hunched over a pot on the stove. Vaccaro had no idea what was happening in that pot, but he wanted to find out. A new world opened up when Vaccaro’s friend’s father walked him through brewing a Charlie Papazian Cranberry Ale recipe. “I’ve always been into cooking and into creating things,” Vaccaro says. It was an added bonus that the end result of this creative process was a beverage that Vaccaro, then 17, was still years away from being able to procure legally.

2. Answer the calling
In college, Vaccaro started out studying to be an accountant, because while “I thought it would be cool to be a brewer, I didn’t know you could actually do that.” He was much better at brewing than he was at studying numbers, though, and after discovering the fermentation science program at UC Davis in the pages of Zymurgy magazine, he ditched brewing for a place where he could surround himself with beer. Davis taught him the science behind brewing, and a job brewing for Sierra Nevada taught him how to put that theory to work. “They cut no corners,” Vaccaro says. “I learned the way you should do things working there.”

3. Chase the dream
Vaccaro left Sierra for a brewing job closer to home, but the place closed six months after Vaccaro arrived. Captain Lawrence sprang from his newfound unemployment, in late 2005. “I don’t know a brewer out there who doesn’t want to be in charge of making their own beer,” he says. “But it had always been a pipe dream.” Being out of work forced Vaccaro to think about what it would take to open a place of his own, and the more he thought about it, the more he knew he had to take the leap. “I was 27, I had no wife, no kids, no mortgage. I didn’t have anything to lose.”

4. Stay flexible
Captain Lawrence would not have survived its first year without its tasting room. The space brought in new customers, and allowed Vaccaro to move growlers and merchandise out the door. It brought 300 drinkers to the brewery the first weekend Captain Lawrence opened; it’s now the brewery’s social center, and an important source of business. And Vaccaro never even factored the tasting room into his business plan. “Writing the business plan was a great exercise in understanding the market,” Vaccaro says, “but the reality is, once you open up, you throw it out the window. You hit the ground and go, go, go as fast as you can. When things change, you go with it.”

5. Make the basics fun
Vaccaro wants Captain Lawrence to marry Old World flavors with New World techniques. This often means taking barrel-aged beers in innovative directions. But it also means pushing his year-round portfolio to look different. He launched with an Imperial IPA instead of a standard IPA. His flagship dark beer is a Smoked Porter, while his lightest regular beer is a Kölsch. “I didn’t go to school for marketing,” he says. “I just knew what I wanted to drink. I didn’t want to do an everyday, simple Gold Ale. What’s the fun in that?”

6. Give it a twist
Pale Ales dominated Vaccaro’s brewing repertoire, even before his stint brewing at Sierra. Vaccaro brews the kinds of beers he wants to drink; he drinks a lot of Pale Ale, so he brews a lot of Pale Ale. At the same time, he’s conscious of the need to make his version of the style stand out. Freshchester Pale Ale layers Simcoe, Columbus, Cascade and Palisade hops on top of two-row and English Crystal malt. The beer is designed to be bitter enough to dry out the malt, without being sharply, overpoweringly bitter. “There are only so many styles out there,” he says. “You try to put your own twist on it. I hope it’s unique enough to be known as ours.”

7. Nobody goes there anymore; it’s too crowded
Bourbon barrels form the backbone of most breweries’ barrel aging programs, which is why Vaccaro doesn’t use them anymore. Vaccaro aged early batches of his Smoked Porter in bourbon, but he was unhappy with both the finished product and the barrels’ ubiquity; he now ages an imperial version of the beer in local wine, rum and apple brandy barrels. He relishes exotic combinations like Smoked Porter and wine (Captain Lawrence’s Smoke from the Oak), and the marriage of Belgian yeast, American hops, vanilla oak and apple (Golden Delicious, an apple brandy-aged Tripel). “Bourbon has been done so many times,” Vaccaro says. “Why use what everybody else uses?”

8. Go wild, with a purpose
Vaccaro has a strong bent toward experimental wild beers. He won a Great American Beer Festival gold for Cuvee de Castleton, a boundary-pushing ale made with Brettanomyces and whole Muscat grapes, aged in local wine barrels. He has played around with sour Golds and Browns, with cherries and raspberries. His Hops and Roses adds Brett, rose hips, hibiscus and elderflowers to a golden sour ale base. He believes wild brewers need two qualities: acceptance of failure, and clear ideas. “If you don’t accept the fact that you’re going to fail, you shouldn’t be doing it.” Vaccaro’s failures tend to come from barrels that he filled just because he had time and space. They go wrong, he says, because of “lack of purpose.”

9. Do it differently
Captain Lawrence’s initial lineup skipped over an IPA and jumped right to imperial territory. Vaccaro figured that if his customers were hopheads, he might as well give them as much hop goodness as he could. Captain’s Reserve Imperial IPA is a pure delivery vehicle for alpha and beta acids. The beer’s base is just two-row malt and sugar, and it’s loaded with Simcoe, Palisade, Chinook and Cascade hops. Over the years, Vaccaro and his crew have done numerous plays on the style. But it took Vaccaro seven and a half years to put a conventional IPA into production. He wanted to wait until he could get hops under contract he’d never used before. If he was going to push another IPA into the market, he wanted it to be something new. ■ 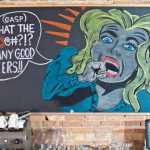 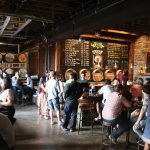