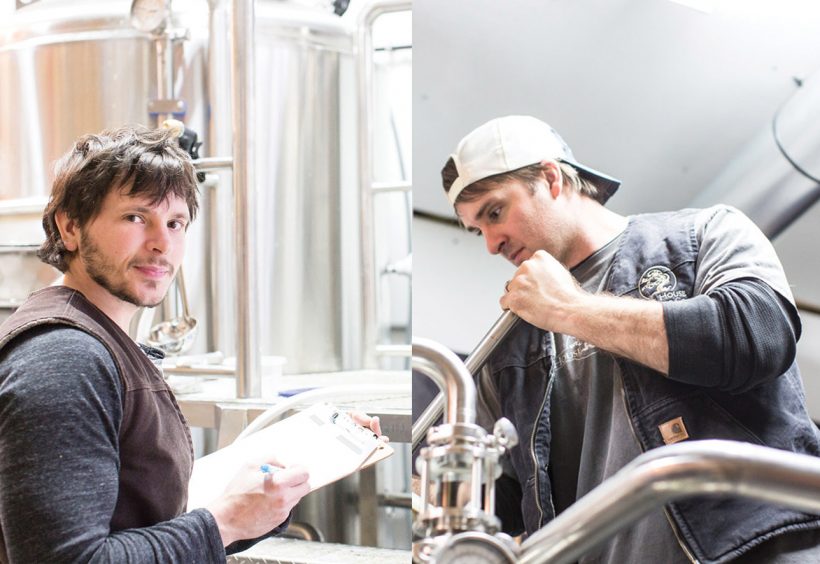 The Tree House Brewing Company started with four friends—Nate Lanier, Damien Goudreau, Dean Rohan and Jonathan Weisbach—making homebrew in a rural Massachusetts barn. The four have brewed through a blizzard and a tornado. They’ve kept the living room atmosphere that marked their early years, even as the tiny brewery has grown into the producers of one of New England’s most sought-after beers, Julius IPA. Scores of fans flock to Goudreau’s barn for growler fills of the IPA every weekend. “We like to meet our customers face to face,” Lanier says. “We like the idea of people making a day to come out and see us, bringing their own food over, hanging out on Damien’s property.” BeerAdvocate spoke to Lanier and Goudreau about their collective effort.

1. Obsess about it
Ask Nate Lanier, the head brewer at the Tree House Brewing Company, how he went from craft beer fan to pro brewer, and he’ll shrug it off as a story that a hundred brewers have told before: His girlfriend got him a hombrew kit as a gift, and the deeper he dove into the hobby, the more he loved it. No big deal. Damien Goudreau, his Tree House Brewing co-founder, tells it slightly differently. He says Lanier can’t just dabble in anything: “He doesn’t just ride a bike, he races to the top of Mount Washington. He doesn’t jog, he does a 50-mile run in Vermont. If he brews beer, he’s going to be obsessing about it.”

2. Famous last words: Go ahead
Lanier drew his friends closer and closer into his homebrewing hobby, and things mushroomed when Goudreau bought a new house in Brimfield, a rural town 70 miles west of Boston. The new house had a barn that Goudreau thought might be a good spot to build motorcycles; instead, it became Lanier’s homebrewing base. The guys liked the beer they made better than most stuff they could buy commercially, so they hung a shingle and invited all of New England over to Goudreau’s barn. “My wife said, You want to brew beer in the barn with your friends? Go ahead,” Goudreau says. “Before you know it, she’s stuck behind the bar, filling growlers.”

3. Come on over
Tree House will produce roughly 500 barrels this year. The company has a tiny distribution footprint: They’re usually on draft at six bars, the farthest 20 miles away. The vast majority of the company’s output is sold on-site, to locals and fans who make the weekend pilgrimage to Brimfield. This is by design. “We wanted to be part of the movement for fresh beer, beer you get on a community level, beer that’s consumed fresh,” Lanier says. Tree House’s barn brewhouse is the embodiment of this culture. “When we were drawing up the business plan, I was excited about how many restaurants we’d be in,” Goudreau recalls. “Nate was excited about how many people we’d be doing growler fills for.”

4. Work overtime
Tree House started as a hobby; it isn’t yet a career for anyone involved. The brewery’s four founders all put in time in the barn on top of their day jobs (Lanier is a project manager at a construction firm, Goudreau co-owns and runs a fitness facility, Rohan is a plumber by trade, and Weisbach is a freelance graphic designer). Their wives and girlfriends have been pressed into duty, too. “Everyone wears every hat at every time,” Lanier says. “It’s a nonstop enterprise with help from everyone around us. It’s stressful as hell on Saturday, when 50 people are lining up in the driveway, but at the same time, wow, we’ve created a product that people are excited enough about to dedicate their Saturdays to.”

5. Brew like a Jedi
Because Tree House has no packaging line and sells most of its beer on-site, its lineup shifts on a dime. “It’s the best thing in the world for a brewer,” Lanier says. “A guy can ask me on a Tuesday what I’m brewing on Saturday, and the recipe doesn’t exist yet.” The brewery cooler is stocked full of hops; Lanier acquires interesting varieties, and figures out what he’ll do with them later. Eureka, a hoppy Blonde Ale, was brewed to showcase a load of Nelson Sauvin hops he bought from NoDa Brewing. At the same time, Lanier won’t jump into a recipe half-cocked. He reworks flavors in his head long before they hit the kettle; he’d been mentally editing a recent Farmhouse Ale for three years before finally pulling the trigger on it.

6. Cut the guesswork
Julius IPA is the beer that made Tree House into a cult favorite. Lanier stuffs it with 3.5 pounds of hops per barrel, and the resulting brew—hazy orange, gently bitter and overflowing with citrus, mango and passionfruit aromas—drives hopheads wild. Lanier has been brewing and refining Julius for years, and he’s grown protective of the recipe that built Tree House. He’ll walk you through Eureka, step by step, but when it comes to Julius, the most he’ll allow is that just three hops go into it. Brewery visitors keep trying to guess which ones they are. They’re usually wrong. And knowing what’s in the thing is really beside the point. The point is what’s in the growler—a beer so tasty and so rare, it sells out every weekend.

7. Keep it simple
Tree House’s second beer in near-constant production is That’s What She Said, a roasty, smoky Milk Stout that pits sweet lactose and bitter chocolate against one another. The recipe is deceptively simple—pale, roasted and chocolate malts come together with oats in a complex-tasting, supremely drinkable beer. By de-cluttering his malt bill, Lanier is diving deep into the brewer’s art: making basic ingredients taste more involved than they really are. “All our beers are simple and straightforward,” he says. “It’s about the process, taking the time to figure out how things work. I like to see people get simple beers right.”

8. Celebrate Christmas in July
The Tree House crew likes mixing in hoppy ales to play off Julius. One of their favorites, Sap, was supposed to be a Christmas beer. Lanier isn’t a fan of spiced beers, so he brewed a beer that would play off the aroma of a Christmas tree—an IPA heavy on piney Chinook hops. Once the brewery crew tasted Sap, they knew they couldn’t confine the recipe to the holidays. Tree House’s production model allows the crew to make decisions like that on the fly. “That’s the nice thing about not having any packaging,” Lanier says. “We have no real production schedule,” so holiday beers can become year-rounders on the fly.

9. Move forward
Tree House was never meant to stay in Goudreau’s barn permanently, but a recent run-in with the town zoning board has greatly accelerated Tree House’s second act. The new brewery, currently in the planning phase, will have a tasting room and a canning line, and will be big enough to get Julius to everyone (in Massachusetts) who wants some. They’ll move in the existing 5-barrel brewhouse and use it for small-batch beers. The new space will retain the living room vibe of Goudreau’s barn, while adding a heavily agricultural element: Lanier wants to grow his own hops and orchard fruits. He calls the brewery’s current zoning troubles “a blessing in disguise. Getting your ass kicked and moving forward, in any facet of life, is not necessarily a bad thing.” ■ 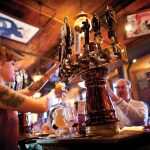 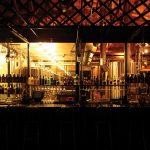