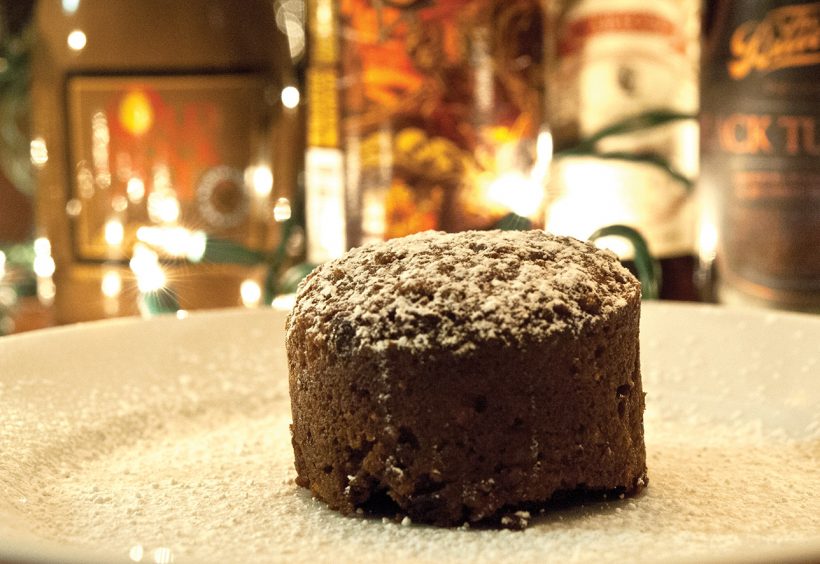 The holidays are a very special time of year. I love all the feasts, potlucks and gatherings, events that center around libations and luxurious buffets more than any other time of the year. The winter’s long, chilly nights trigger cravings for richer, more soul-satisfying flavors—what better time to break open those cellared and prized brews?

These recipes revolve around pudding, paying homage to the holidays of yesteryear. Timeless as these flavors are, they all benefit from using beer as an ingredient. Spend some extra time researching the beer styles and flavor integrations. The subtle nuances will add complexity that you didn’t even know was missing. Have a wonderful holiday season, and happy New Year!

Christmas pudding is a traditional medieval English dessert served on December 25. Sometimes called “figgy pudding” or “plum pudding,” this dessert is more like a steamed cake filled with dried fruit and alcohol than a traditional pudding. It is different from the American fruitcake, as it is not as heavy and dense. This pudding can be customized to anyone’s liking. This recipe highlights the flavors of the fruit to go with an Imperial Stout.

Christmas Pudding Directions:
Start by measuring out the figs, currants, golden raisins and cherries into a medium-size bowl. Top the fruit with the Imperial Stout and zest of an orange (leaving behind any pith or white rind from under the orange skin), and mix together well. Wrap with plastic wrap and let sit for at least 24 hours or as long as a week (in the refrigerator). This will rehydrate the fruit and infuse the flavors together. The roasty, coffee and chocolaty notes from the Imperial Stout, and the bright orange essence, enhance each other in the classic flavor combination.

In a medium-size bowl, add the eggs and whisk until they become frothy. Add in the dark brown sugar and treacle, then whisk to combine. Slowly pour in the warm butter, followed by the Imperial Stout, grated carrot and orange juice; mix well.

In another bowl, add the breadcrumbs, all-purpose and barley flours, any nuts, cinnamon, allspice, clove, nutmeg and baking powder. Using a clean whisk, stir to evenly incorporate all the dry ingredients together.

Add the soaked dried fruit and all the syrupy juices to the wet mixture, and fold in the dry ingredients, blending together. Once the batter is made, it can either be divided into nine individual serving containers or one large pudding mold. For the individual serving vessels, I suggest an 8-ounce, wide-mouth canning jar with a screw-top lid. These allow for the finished pudding to be easily removed, plus they’re heat tolerant, can be sealed and can also be given away as gifts or a host/hostess present. A large glass bowl or pudding mold can be used for a single pudding. With either presentation, grease the container with a liberal amount of butter, coating evenly.

For individual servings, portion out just over 6 ounces of pudding batter into each canning jar. Wipe the rim and threads with a paper towel to remove any debris. Seal each jar tightly with a lid and ring and place aside. If using a large mold, fill with the pudding mixture and create a parchment ring to cover the batter. Then cover the mold with a single piece of aluminum foil to prevent any water or steam from entering or escaping the mold, while the parchment paper will act as a block to the rising pudding coming in direct contact with the foil.

To steam the pudding(s), there are a few heat and equipment choices. Traditionally, the pudding is put into a metal or bamboo steamer, and placed over a simmering pot of water. This can still be done, just check the water level every hour to prevent the water from fully evaporating during the cooking process. Another alternative is to set the pudding mold(s) into a large tray or hotel pan with high sides, filling with boiling hot water halfway up the sides of the mold(s).

Cover the pan first with a tight seal of plastic wrap, then a sheet of aluminum foil to create a seal, keeping the steam in the pan while baking in the dry oven. Then place the prepared tray into a preheated 300°F oven to steam. The pudding will need very little attention while steaming. If steaming several 8-ounce jars, the cooking time can take about four hours, as there is more surface area than a larger mold. For a larger single pudding, plan on steaming the pudding for 7–8 hours. Since the steam is a wet heat and the batter is damp, the pudding will not dry out with this amount of time.

Once the pudding is cooked, it can be left for 2–3 weeks before serving, so this really is a dish best made ahead of time. Some pudding enthusiasts will serve the prior year’s pudding as a special treat. Of course, the pudding can also be served the same day. To serve, rewarm the pudding in a similar steamer setup and cook for 45–60 minutes. Then remove from the pan/steamer with a kitchen towel, open and run a knife around the edge of the mold. Top with an upside-down plate, and invert the pudding onto the plate, giving a light shake to release the pudding from the mold. Lightly dust the top of the Christmas pudding with powdered sugar and serve with the Hard Sauce.

To add to the culinary theater of the evening, the pudding can also be served flambé. To do this, warm a half-cup of brown spirit (brandy or cognac is traditional, I like a nice bourbon, Irish whisky, or scotch) in a saucepan to around 160°F. Make sure there isn’t anything flammable nearby, take the pan off heat and ignite the alcohol with a match or lighter, keeping the pan a reasonable distance away from you. Carefully pour the flaming liquor over each unmolded pudding and serve immediately.

Hard Sauce Directions:
In the bowl of a stand mixer (using a whisk attachment), food processor or regular bowl with an electric hand mixer, cream together the butter, powdered sugar and spirit. Mix for several minutes until the “sauce” is light, fluffy and creamy. Transfer to a serving container and serve at room temperature. This sauce can also be made in advance, and can be preserved if sealed and refrigerated for up to two weeks. 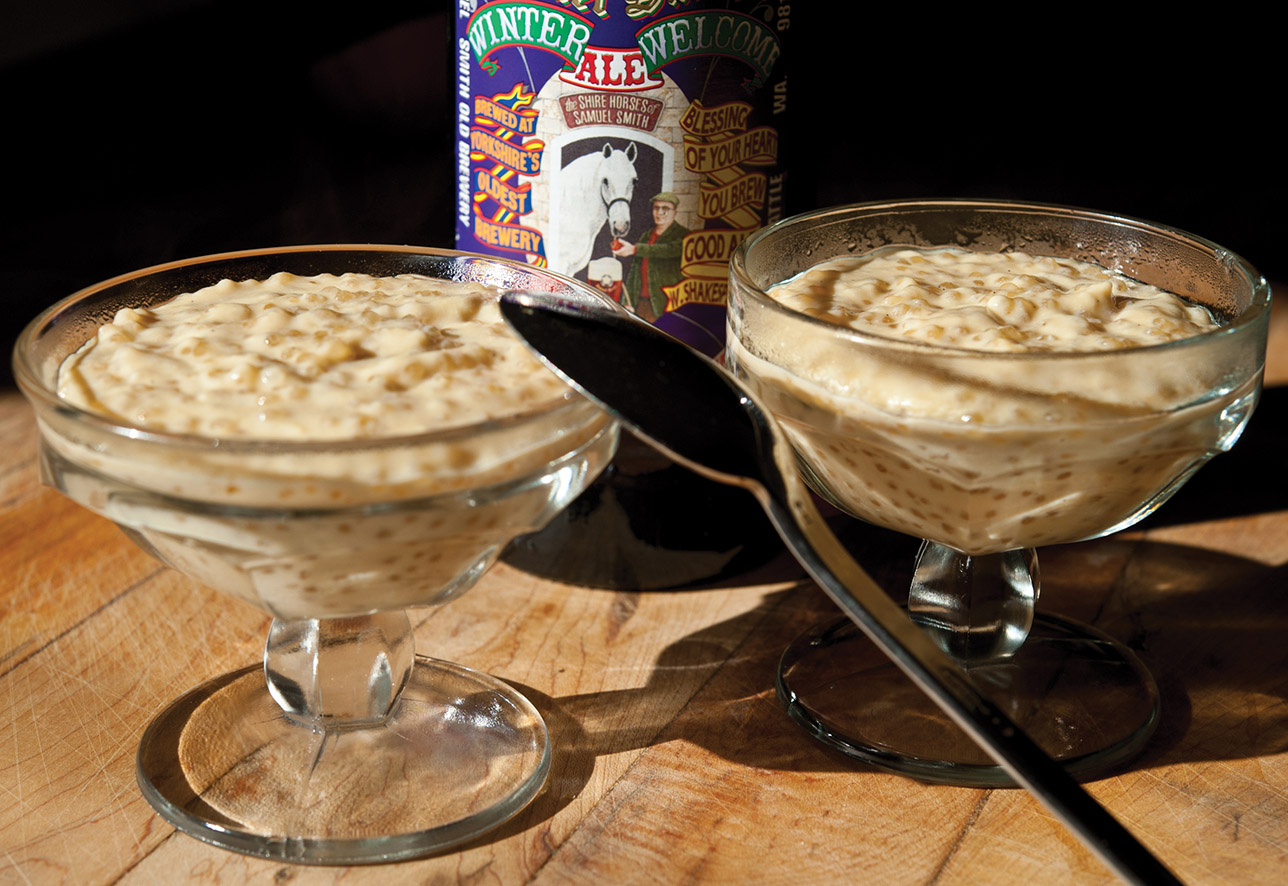 Tapioca Pudding à la Winter Warmer
Rich and creamy tapioca, with little balls of chewy goodness that stick to the teeth, scream comfort food. To play up this classic dessert, the addition of a Winter Warmer or holiday-spiced beer will add an extra layer of malt, toffee and caramel flavor, while not hitting you over the head with spices or hops.

Serves: 4–6 guests, depending on serving size

Directions:
In a container, add the tapioca pearls along with the cream and half & half. Mix to combine, seal and place into the refrigerator for at least an hour and up to 24 hours to hydrate the pearls.

In a medium-size pot, preferably with a thick bottom, placed over medium heat, add the dairy-soaked tapioca pearls along with the beer. Using a heat-proof spatula or wooden spoon, periodically stir the mixture to prevent any of the tapioca balls from sticking to the bottom of the pan. Bring to a simmer and cook until the white tapioca pearls are translucent, about 10 minutes.

In a bowl, whisk together the eggs, sugar and salt, until lightly foamy. Use a ladle to transfer a scoop of the hot cream/beer/tapioca mixture and whisk into the egg mixture, to temper the eggs, preventing them from scrambling. Repeat this step with three ladles and then pour the warmed egg mixture into the pot on the stove. Stir well and often at this point, and bring the tapioca to a soft simmer. Cook the tapioca for about 2 minutes to develop a thick pudding-like consistency. Remove from the heat and let cook for a few minutes, continuing to stir. Mix in the vanilla extract and transfer the finished tapioca pudding into individual serving containers or into a larger bowl, suited for presentation.

The pudding can be served warm or cold—both are wonderful and comforting. If the pudding is to be served cold, try putting a dollop of light, sweetened whipping cream, whipped to a soft peak texture on top. ■ 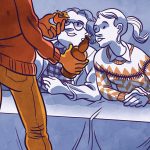 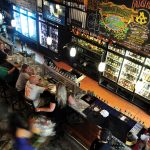