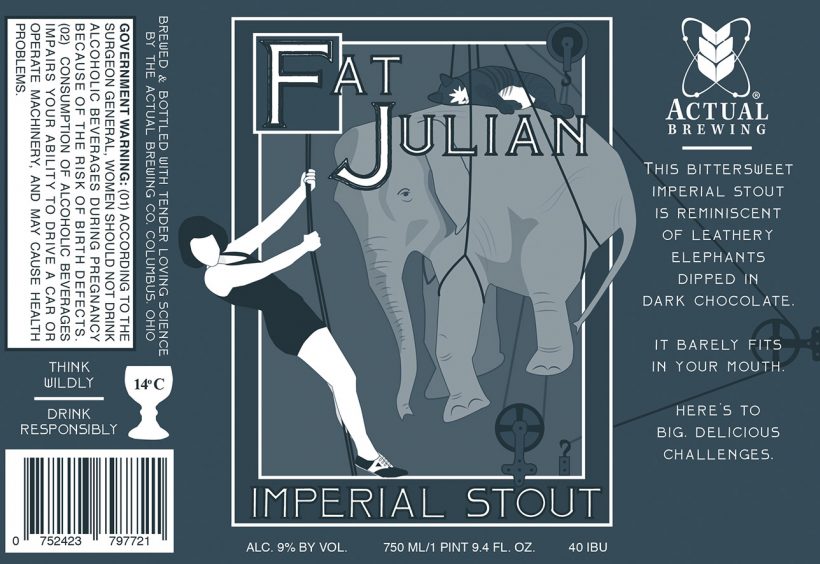 For Mira Lee, opening Actual Brewing with her husband Fred was not unlike hoisting an elephant above a vat of chocolate. “It’s about brute strength,” Mira says of the Fat Julian label, which she designed. “It’s such a huge, heavy, chocolaty Stout, it barely fits in the mash tun, so it’s the perfect foil for talking about big challenges and the rewarding aspects of hard work.”

For the Lees, the hard work started in 2010, when Fred quit his “soul-draining” bank job and bought Mira “the biggest letterpress he could find.” Fred was a homebrewer, but Mira didn’t know anything about beer or design. Luckily, the Columbus, Ohio, brewery “was already assembling as this weird craft science collective with a brewery, coffee roastery and beverage laboratory,” Mira says. “The DIY chutzpah of the place sort of rubs off on you, and you start thinking, Oh man, I need to get around to making that laser-guided cheese slicer for real.”

In other words: She learned.

On one of their experimental benders, the Lees brewed a Stout “so decadent that it was called Fat Julian, in honor of this morbidly obese imperial housecat we know,” Mira says. “That’s him up there in the corner, weighing down the elephant.” (Despite the label’s implication otherwise, Mira confirms that they’re “currently using an elephant-free process.”)

Originally designed to taste “like chocolate milk cooked on the stove,” says Fred, the beer ended up as “a massive, roasty chocolate, leathery Stout that blew our minds. It drinks like it’s its own food group.” Like all of their labels, the Lees were after a “dreamy science feel” for Fat Julian, says Fred; “crisp and practical, but surreal, like a dream you once had about completing your doctorate work at the circus laboratory,” offers Mira.

“I want people to feel like they’re searching for familiarity. It’s like looking at foreign-language newspapers,” says Fred.

There’s that Actual-brand of big-idea thinking again. “Beer’s a mood-altering substance. I want ours to make people feel like they can do great things,” says Mira. “It’s hard to say shit like that without sounding like a cheeseball, but it seems more plausible to people when they’ve got a beer in their hand.” ■ 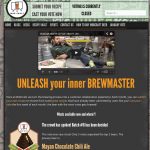 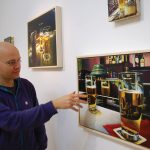