The Great Barrel Race: Foeders Are a Rare (and Mysterious) Commodity 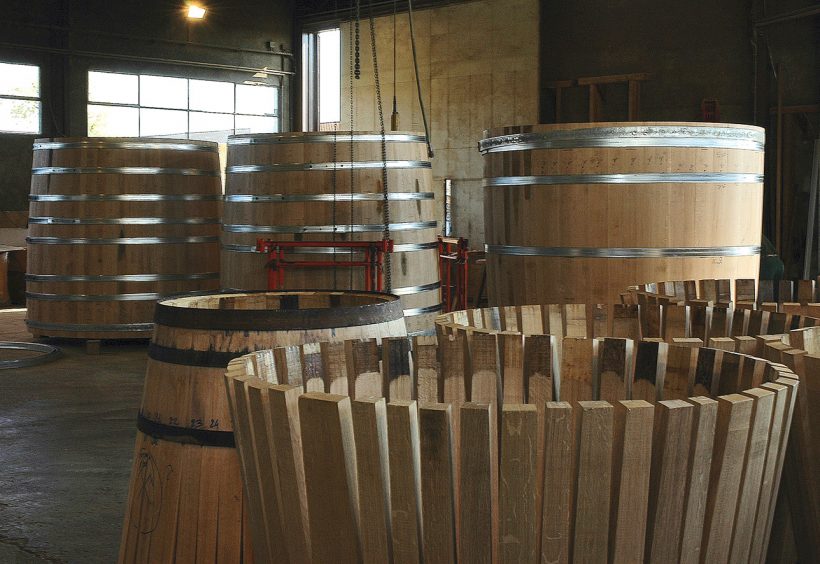 When Boulevard Brewing Company announced a draft-only, wood-aged, sour beer called Foeder Projekt #1 in October, “ambassador brewer” Jeremy Danner had his work cut out for him. For starters, he had to write a blog post explaining what a foeder is (“a giant wooden barrel”), and how to pronounce the word (“FOOD-er”).

Whether his efforts were in vain is up for debate (Danner recalls “a really big dude” once asking him for a pour of “the Frodo Project”), but he nevertheless embraces the chance to educate the public about barrel-aged, sour beers. There was just one fact Boulevard wasn’t willing to disclose: where exactly those foeders come from. And a closer look at the growing “giant barrel” industry reveals that Boulevard’s secrecy may be a very smart move.

Increasingly, sour beers—and the foeders used to produce them—are becoming a less-surprising feature among American craft breweries. Wisconsin’s New Glarus Brewing Co. has had them since 1994. In fact, co-owner and brewmaster Dan Carey believes New Glarus to be the first US craft brewery since Prohibition to use foeders for the production of sour beer (others used oak simply to store lagers). “When we built our brewery, one of the first things I did was buy some 100-barrel oak tanks from the Rodney Strong winery,” says Carey. “Our friends from New Belgium even came out to visit us in 1995 and checked them out.”

What New Belgium went on to do with their own barrel program is a major chapter in the narrative of American craft beer. But, perhaps adding to their allure, the foeders themselves are still shrouded in mystery. Danner, from Boulevard, eluded questions as to how Boulevard acquired their foeders, revealing only that they’re from “a high-end winery in California.” Perennial Artisan Ales brewmaster and co-founder Phil Wymore is similarly aloof—apologetically so—about the three used, $12,000-a-pop, 60-barrel (1,890-gallon) foeders that his St. Louis, Mo., brewery has on the way.

“These tanks are in a limited-supply / high-demand situation,” Wymore says. “We’ve been searching for used foeders for over a year, which is why we feel the need to protect our source. This attitude is not natural to us, as we’re not very secretive about anything else.”

One of the companies providing foeders to breweries is Seguin Moreau Napa Cooperage. Most of Seguin Moreau’s business is producing new barrels for wineries, but “over the past four years, we’ve seen a big increase in the number of calls and emails from breweries,” says Chris Hansen, the cooperage’s general manager. “All are looking for used foeders, and we have been able to sell every used foeder that we have been able to acquire from wineries or distillers replacing them with new ones.”

Hansen also validates Danner’s and Wymore’s secrecy: “The supply is limited, so we do have a list of breweries interested that we contact whenever used foeders become available.”

The beer side of Seguin Moreau’s business (Hansen says it’s not a large portion) began with New Belgium in 2012. After brewmaster Peter Bouckaert and Eric Salazar, New Belgium’s wood-aged beer specialist, purchased seven 220-hectoliter (about 5,800-gallon) foeders from Seguin Moreau, word spread. “Once we did the project with them, other breweries saw the foeders on their blog and in person,” Hansen says. “[They] looked to us as a resource.”

For Seguin Moreau, this word of mouth is a nice supplement to their usual business. “It gives us a great way to help our [non-beer] clients when they look to replace their foeders,” Hansen says. “Sometimes they don’t know what they could do with them, or it’s a hassle for them to sell on their own. This way, we’ve found a great market that has an interest in them.”

All of Seguin Moreau’s foeders are made in France. Their head office is in Cognac; they have two stave mills (in France and Missouri) and three cooperages, two in France and one in Napa, Calif., where they make smaller barrels. Coopers attend apprenticeship schools, which are supported by the cooperages, for two years. Then they must work up to another five years before they’re considered “expert” coopers. Early on, they’re not allowed to use any machinery or electric tools; they rely on axes, knives and compasses.

“Making foeders is much like making fine furniture or cabinets,” Hansen says. “Ensuring all the pieces are measured and cut exactly, fit together perfectly with a watertight construction.”

Hansen says Seguin Moreau has two master coopers on staff at their US office for training newbies and overseeing quality control. All of their foeders—which range from 10 to 1,000 hectoliters (roughly 264–26,400 gallons)—are custom made, depending on what dimensions and features a client requests (customizables range from size of drains to door placement and internal cooling equipment). 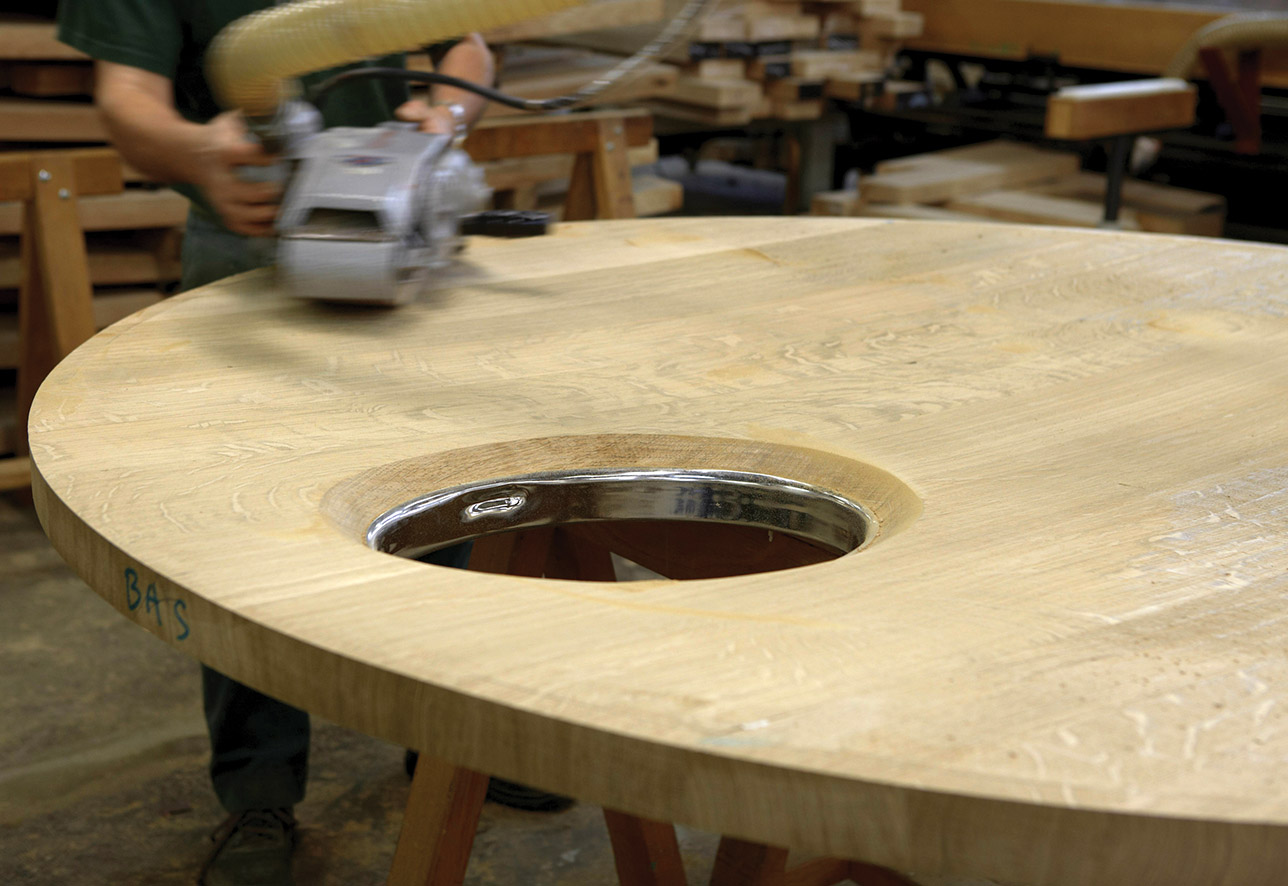 Typically, the wood for each unit is seasoned—meaning the staves (wooden slats) are stacked and left outside, exposed to the elements, in order to dry the wood, wash out the “rough flavors” and soften the tannins—in one of Seguin Moreau’s yards for four to five years before they’re sorted, selected and cut to the proper dimensions. Then the tank is assembled and toasted on a fire, and tops and bottoms are cut and installed. Once assembled, the foeder is tested for watertightness, then sanded and varnished. They paint the hoops, and then it’s all set, destined for wineries. Sometimes they’re shipped fully assembled, other times disassembled and put back together at the brewery.

It would take a few years after that visit to New Glarus, but New Belgium started acquiring some large-scale (60 hectoliters, or about 1,585 gallons) barrels in 1999. Now, they’ve got 64 foeders ranging from 60–220 hectoliters (about 1,585–5,800 gallons) in their sprawling, dimly lit barrel room, 32 of which Salazar says are “in the hydration stage of life.”

Salazar says that foeders are the traditional aging vessels for Flanders beers like the ones coming out of Belgium’s Rodenbach Brewery—a former employer of Bouckaert—but that “tradition is only part of it.” Other reasons to opt for a foeder instead of a smaller barrel include “the slow ingress of oxygen,” which Salazar says “is easily monitored over time with such a large liquid-to-wood ratio. Smaller vessels can progress faster and often will acidify before certain other flavor profiles can develop.”

Another, more obvious reason, is New Belgium’s large-scale production, “which grows each year and shows no sign of slowing.” Their recent expansion finds the brewery doubling its capacity to age beer in oak, but since those newly acquired foeders need to be rehydrated before they can be filled with beer, and then that beer needs aging time, the benefits of the expansion won’t be realized until the middle of 2015.

Salazar says New Belgium looks for foeders in good shape (a visual inspection is usually the beginning of the process), ones “that have been or are currently being stored with potassium metabisulfite dissolved in water to inhibit mold growth.” Of course, aside from these contributing factors and criteria, there is that one guy in the company who will sometimes just buy an adequate foeder because it’s there. “I would say we wait for demand to justify new purchases, but thus far that hasn’t been a problem,” Salazar says. “Peter has been known to buy a foeder simply based on the fact that it’s in good shape and available.”

While breweries with connections, like New Belgium, acquire as they go, the demand for foeders among smaller breweries is only growing. Jason Ebel, of Two Brothers Brewing Co. in the Chicago suburb of Warrenville, Ill., says his brewery is up to seven tanks that they acquired between 2008 and 2009—six are 100 barrels (3,150 gallons) and one is 35 barrels (about 1,100 gallons)—that are “constantly full.”

Crooked Stave, in Denver, now has 11 foeders, ranging from 800 to 3,000 gallons. “We do not have a specific source that we go to for every one of our foeders,” says Nick Mader, Crooked Stave’s cellar reserve coordinator. “Since we are not using brand-new foeders, the availability of foeders coming from wineries is ever changing.”

“We happily share information with breweries we know are in the market for these vessels,” says Salazar, of New Belgium. “Although, I do see availability shrinking as more breweries are starting wood-aged programs of their own.” ■ 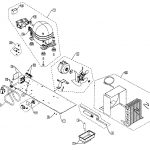 Previous: Better by Degrees: Why Cold Storage Matters to Your Beer 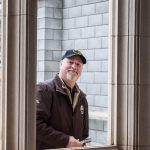