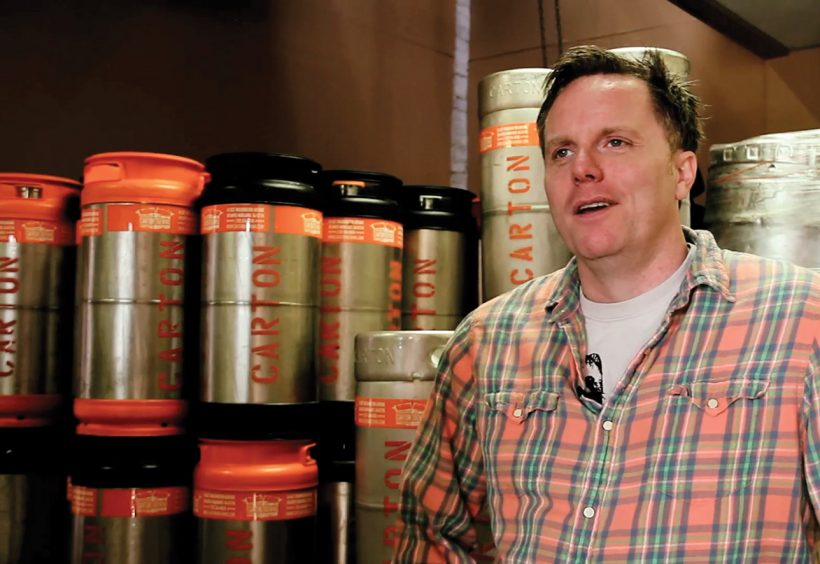 Augie Carton is in the brewing business with his cousin, Chris Carton, and his longtime friend, Jesse Ferguson. When they launched Carton Brewing Company together on the Jersey Shore in 2011, they set out to brew like chefs and create new, complex recipes. Just as importantly, they tried to keep the business rooted in the relationships that created it. So Augie Carton has two standing meetings every week: One brewing on a Sunday afternoon with Ferguson, and one drinking over a fire pit with Chris. “We keep those two meetings, one over fire, one over the kettle, like we’ve done for the past 15 years.”

1. Create flavor
Augie Carton grew up surrounded by a deep respect for beer. His mother and father both cooked, and considered flavorful beer as vital as any other part of a meal. Carton remembers his parents hosting many of the beer taste-tests that became part of the Great American Beer Book, an early 1980s look at beer culture. His own eye-opening beer-drinking moments came sipping his first Fat Tire in Vail, drinking Lambics while backpacking through Europe and sharing a memorable, Saison-imbued dinner with his wife. But it all flowed from growing up in a household where cooking and brewing were closely related. “To me, beer is cuisine,” he says. “It’s creating flavors, like a chef, like a winemaker.”

2. Find a niche
Carton Brewing sprang from the confluence of two longstanding relationships. Augie Carton grew up across the street from his cousin, Chris. The two are still neighbors, and fond of sharing IPAs while sitting around Chris’ fire pit and kegerator. Augie met his brewmaster, Jesse Ferguson, through their wives, who are longtime friends; he and Ferguson bonded over cooking and beer, and the more they talked, the deeper they dove. Augie turned to Ferguson, an accomplished homebrewer, with a question he and Chris were puzzling over: Why couldn’t they find a low-alcohol beer loaded with hops? Augie and Ferguson hammered a recipe into place, and that recipe, for the beer they now sell as Boat Beer, became the foundation of the brewery the three would launch. “That’s why you start any business,” Augie says. “We wanted this type of beer to exist.”

3. Stay liberated
“I was raised in the 1970s, when you were told, ‘Do what you love, and you’ll never work a day in your life,’” Carton says. When he started working, “I learned that is 100 percent not true.” Carton didn’t want to depend on the brewery to make his mortgage payments, because he didn’t want financial pressures to compromise the creativity: “It had to be a place where I could have fun and be creative, and do cool stuff.” Ferguson runs the brewhouse full time, but Augie and Chris kept their outside jobs, and put in their brewery work on nights and weekends. The arrangement allows the three to take more risks. “We’ve managed to keep ourselves liberated,” he says.

4. Brew original
The Carton brewing crew focuses on creating flavors, not remaking them. The brewery doesn’t produce a Pale Ale or a straight-up IPA (although they don’t rule that out for the future). “I’m lucky enough to have 20 dollars in my pocket, and I can go to the store and buy Sierra Nevada,” Carton reasons. Instead, Carton Brewing pours itself into putting fresh spins on familiar styles, like an Imperial Golden Cream Ale that drinks like coffee and cream, a Pumpkin Cream Ale, or a salted Pale Ale brewed with clams and lemongrass. It brews sour Stouts, a smoked Cherry Porter that evokes a Swisher blunt, and a trail-mix beer made with dehydrated peanut butter and fermented on raisins. Its fermentation tanks are its own.

5. Court hatred
Carton compares the brewing industry to the restaurant business. Budweiser is McDonald’s, he says. Blue Moon is Applebee’s. Craft brewers are local restaurants, and Carton Brewing is a modernist kitchen, not a classic bistro. He points to Intermezzo, a sour beer brewed with puréed green apples and fresh wasabi root. “It was as wild as a beer could get,” Carton recalls. “It smelled like apples, wasabi, horseshit and parmesan cheese. I loved it.” The fact that the beer provoked strong reactions—positive and negative—meant it did its job. “Some people hated it. You have to push boundaries. If you make something that doesn’t offend anybody, you’ve made Budweiser.”

6. Stay small, think big
Boat Beer, the session ale that launched Carton Brewing, started as a low-alcohol IPA. Carton and Ferguson scrapped that approach because they couldn’t keep the beer balanced, and created something entirely new. Carton describes Boat as “a super-hoppy session beer for Double IPA drinkers.” The brewery layers eight varieties of hops over a base of Pilsner, sour and wheat malts, and ferments it with a Kölsch yeast strain. The result is crisp and minerally, and overflowing with hop flavors, but at 4.2 percent ABV, it’s also made for drinking all day.

7. Jump on the table
Brunch. Dinner. Grub. is Carton Brewing’s answer to table wine. “It makes the least sense to most beer guys, because the aspiration is to be in the middle of the road,” Carton says. Middle of the road doesn’t mean bland, though. BDG pairs peppery, herbal French Aramis hops with bready English malts and a Kölsch yeast. It’s a beer for drinkers who want to pair food with beer, but don’t want to think through which styles go with which dishes. It’s liquid bread that pairs with pasta or sushi, or a burger slathered in blue cheese.

8. Hit all the notes
If Boat Beer is the little brother in Carton Brewing’s family, then the big brother is 077XX. It’s a malt-forward Double IPA that uses the same hops that Boat Beer does (and one additional), but in a bigger, richer package, and with a more traditional American ale yeast. Carton keeps the malt bill up front and dry-hops the beer sparingly because, he says, “We want it to be an even experience. The beer is not just about hops,” he says. “As rich as the hop aromas are, the malt should be that rich, and the yeast should be that rich.”

9. Experiment
Carton and Ferguson meet every Sunday over the Tippy, the brewery’s 20-gallon experimental system. It’s a place to fine-tune new recipes, to test drive wild concepts (like a buttered butternut squash ale dry-hopped with sage, or a salted Pale Ale with cucumber, tomatoes and Summit hops), and to experiment with new ingredients. It’s also an important source of dialogue. Beers from the Tippy land in Carton’s tasting room, where customers “help put ideas to what’s going on in a beer.” And for a company that’s largely run over email, afternoons at the Tippy keep Carton and Ferguson talking face to face, working through flavors the way they used to, before the brewery opened. “We get to spend hours together, talking about what’s going on, doing what we can’t cover over email.” ■ 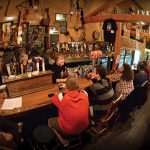 Previous: The Heorot Pub and Draught House in Muncie, Indiana 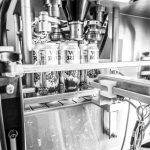