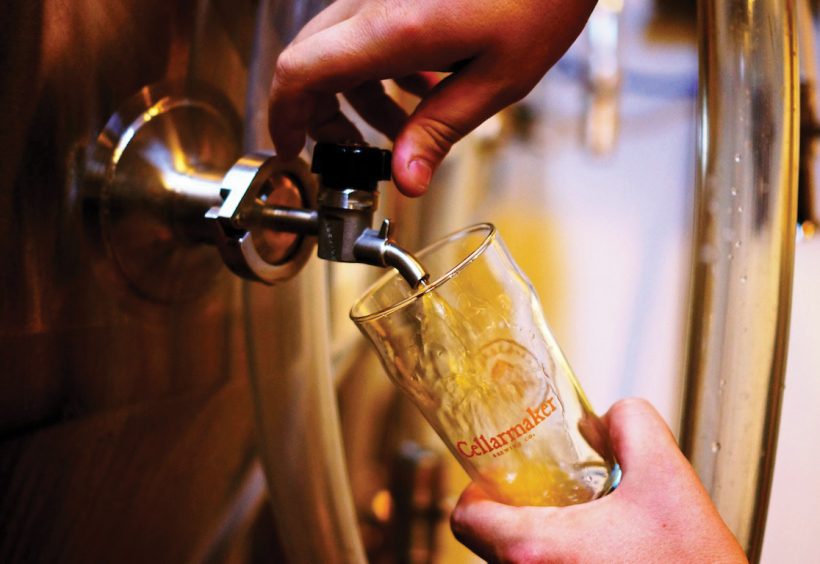 The future of American sour beers started, in part, back in 1994 when New Glarus Brewing co-owner and brewmaster Dan Carey adapted his seven-year-old homebrew recipe, a spontaneously fermented wild ale in the Flemish Oud Bruin style, for his newly founded Wisconsin brewery. He said it was probably a decade ago when he kegged some of that sour Brown Ale for the Great American Beer Festival. “I was particularly proud of this one and called it New Glarus Sour Brown Ale. But some people just wanted to try ‘the Brown Ale,’” Carey recalls. One attendee in particular, whom I envision doing a comical spit-take, exclaimed to Carey’s face, “Dude! This beer is spoiled. You have to take this off.”

Carey relays his story of visiting the Belgian Trappist brewery Orval, where brewmaster Jean-Marie Rock beseeched him, Why do all of you American brewers copy me? Arguably one of the greatest beers in the world could be described as simply a Belgian Pale Ale with an element of Brettanomyces, but there’s nothing simple about Orval. Unlike the brewer’s yeast that most breweries propagate, Saccharomyces cerevisiae, “Brett” is not so easily controlled and is a distinguishing character in many of the best Belgian brews beyond Orval, including sour Flemish ales and Lambics.

But when it comes to brewing with Brett in the US, “our technology, temperament and terroir are different,” says Carey. “Frankly, if you were going hire a band for an event, if you could afford it, you’d prefer to pay a band that plays original music and not a cover band. Rodenbach already exists,” says Carey, referencing the notorious Flemish brewery. “Every musician is inspired, but I’m not a cover band.” Call his sour, frequently fruited beers “Lambic style” if you must, but Carey fervently calls them “Wisconsin sour ales.”

Of all the theories of the origins of Lambic—that spontaneously fermented ale that smacks of chewing a vitamin-C tablet or possibly licking a saddle blanket left unwashed in a stable—there’s a little-talked-about one that concerns the Spanish. No, Spaniards don’t make Lambic beers. That appellation hails from Belgium’s Senne Valley and adjoining Pajottenland, dating back 500 years. But one theory is that this style of beer derived its name from the word “lambicado,” Spanish for “carefully prepared.” True, it’s no quick and easy ale that’s ready to drink in mere weeks, but calling it carefully prepared, in many ways, gives too much credit to the brewer and not enough to wind currents and distant butterflies ultimately responsible for bringing the liquid to life. Since Lambics are fermented spontaneously, there’s little about them that’s “lambicado.”

Cellarmaker Brewing in San Francisco is one of the newest practitioners of carefully crafting beers they actually have little control over. “We will always brew our Saisons with at least some percent of a Brett strain built into the yeast profile. The complexity contributed by the Brett’s presence is fantastic, and the aromatic effects the Brett has on the overall sensory experience of drinking a Saison is an excellent contribution to the beer itself,” says Connor Casey, who co-owns Cellarmaker along with brewer Tim Sciascia. “We are big wine drinkers, like many California brewers, and enjoy the effect a freshly emptied wine barrel has on our funky [or] sour beers. We are super fortunate to have friends who work at local wineries that are willing to trade wine barrels for fresh beer.”

Casey explains their technique, which is somewhat widely practiced among the new guard of brewers, whereby they split a batch of beer among several wine barrels to test the effects of, say, the pineappley Brett Drei or tart Lactobacillius, across different vessels as well as over time.

Or maybe it’s not so much what was in the barrels before, but what—beyond the base liquid—goes into them. Chad Yakobson grew obsessed with wild bacteria and launched the Brettanomyces Project, an open-source website detailing the research and results from his actual dissertation at the International Centre for Brewing and Distilling in Edinburgh. That led to him creating Crooked Stave, the all-sour brewery in Denver that produces the Wild, Wild Brett series of beers (including Yellow, made with mangoes, turmeric and coriander), not to mention the Nightmare on Brett Street series, which alternately ages a Baltic Porter base in brandy, cognac and whiskey barrels.

“Crooked Stave’s mission,” says Yakobson, “is to create ridiculously well-crafted beer using an unconventional approach to brewing science. I intend to achieve that with little tweaks, infusing my own personality.”

Likewise, Johnathan Wakefield developed something of a cult of personality for his homebrewed array of funky beers he calls Florida Weisses, playing off the appellation of lactic wheat beers of old Berlin. Local, fresh fruit is often a pivotal element of American wild ales, and his were so popular that web-based crowds funded his dream of building a commercial brewery in Miami. J. Wakefield Brewing is still under construction, but Wakefield has already brewed collaboration beers at Tampa’s Cigar City and Stone’s Liberty Station in San Diego. “I typically use my culinary skills to pair the fruits that I think would work best,” says Wakefield. Tropical fruits he has employed include guava, mango and passion fruit, as found in his Cigar City collaboration, Miami Madness (the Stone iteration added chile peppers).

When he’s not on the job as head brewer of Perennial Artisan Ales, Cory King is making wild ales for Side Project Brewing, where he imbues his beers with hyper-local fruit picked straight from his family’s farm. King describes his forthcoming Fuzzy, a blond American wild ale, as “fermented with a cocktail of souring yeast and bacteria, and some wild yeast and bacteria from my family’s farm in southeast Missouri. The beer was fermented and aged in Chardonnay barrels, and then further aged on Missouri-grown white peaches.”

And across the country, in Massachusetts, husband-wife team Bryan and Emily Greenhagen are applying their MIT degrees in fermentation science to making beers of New England terroir, such as Vinland Two, the first beer made with native American yeast (which they harvested from a Maine lowbush blueberry) to ever win a gold medal at GABF. “Rather than playing with just hops and malt, you’re really bringing the microbes into the equation and accessing a huge potential for creative work with acidities and aromas not possible with standard styles or in artificially engineered beers,” says Bryan. Mystic’s barrel program is also up and running, but, citing traditional methods, the Greenhagens are giving their beers at least five years on wood.

Terroir of this sort is certainly popular, but one of the other trademarks of today’s Wild Ale makers is collaborating with distant brewers who float in and out of host breweries like microflora in the breeze. Side Project is collaborating on a couple beers (under the umbrella name Saison Desay) with De Garde Brewing in Tillamook, Ore. For Saison Desay No. 1, they used King’s Saison blend of wild yeast and bacteria in De Garde’s multigrain Farmhouse-style Ale. In March, De Garde’s Trevor Rogers was getting ready to send a slurry of his yeast and bacteria to King, so King can do a version in his barrels.

Farther down the coast, back in San Francisco, Cellarmaker has already collaborated with other new, funky brewers: Tired Hands from Ardmore, Pa., and Sante Adairius from Santa Cruz, Calif. On the East Coast, Mystic Brewery has collaborated with DC’s Bluejacket on a saffron Saison.

For Dan Carey’s part, he didn’t merely help lay the groundwork for these upstart funksters. New Glarus built a dedicated wild fruit cave this past February and yes, it’s partially subterranean. They’re going full throttle with their American sour ales, starting with a Wild Sour Blonde that may or may not “get fruited.” (Though gauging the response to New Glarus’ Very Sour Blackberry—which scores perfect 100s on both BeerAdvocate.com and RateBeer.com—consumers are probably hoping for a complementary fruit component.)

“People’s palates are becoming more adventurous and demanding complexity,” says Carey. But he cautions that even though there’s a movement to turn the volume up on these original American compositions, “Belgian [sour beers] are imminently drinkable and refreshing. I think the future will lie not in volume for volume’s sake, but in complexity.” ■ 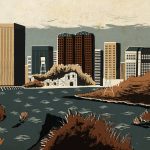 Previous: Where to Drink in Richmond, Virginia 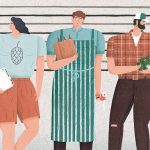