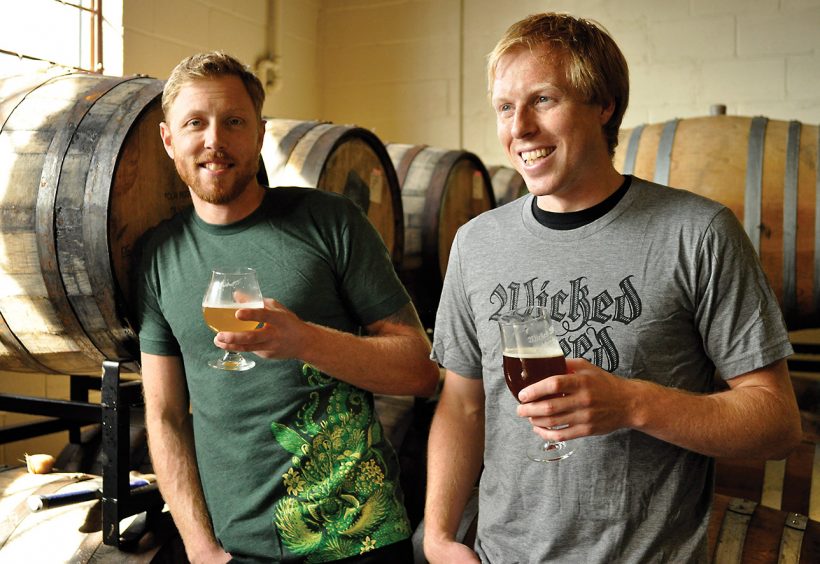 Since opening in 2012, Wicked Weed, the Dickinson brothers’ Asheville, N.C., brewery, has been at the forefront of the industry’s relative newcomers, most recently taking home a bronze at this year’s World Beer Cup. “Being a fast-growing craft brewer, it is stressful,” says Walt. “We always feel like we’re just barely keeping up. But we do the best we can.” The brothers talked to BA about recipe design, sibling dynamics and chocolate bombs.

How would you define talent when it comes to describing a brewer?
Walt: It takes so many people to be a successful brewery. … My artistic approach meeting Luke’s more pragmatic approach with Eric [Leypoldt’s] process control has allowed us to make really consistent beer. … If you took any one of the three of us out of that scenario, we would not be making as good beer. … Brewing is as much art as it is science, so there has to be that component. You’re never going to reach that next level if you don’t really feel it.

How do you approach a new recipe?
Luke: A lot of the time, I like to start with an idea. So for instance, one of our more popular beers in the summer is called Coolcumber, and I got the idea from drinking Hendrick’s basil coolers—Hendrick’s Gin is a cucumber gin—with my wife in the summer. … So then approaching it from the end backwards. Having an idea in mind like that and then figuring out how to get to that final goal.

What’s it like to work with your brother?
Walt: Anybody who has siblings can probably have an idea what it’s like working with your brother. I mean it’s the best of times, the worst of times, right? We’re a great team but we are yin and yang for sure, we’re just total opposites. … I think over the years we’ve learned how to deal with each other a little bit better. I wouldn’t want anything else but to be working with my brother, it’s a big piece of why I wanted to do this brewery, was so I could work with my brother every day. But it’s never without challenges. … It also helps that we’ve got 27 beers to pick from to have a pint of beer after work together.

Can you describe a brewing disaster you’ve had?
Luke: It was our 10th brew, somewhere in there, [the Christmas special Vixen, a Chocolate Orange Imperial Stout]. We decided to use French Broad chocolate factory … we used their cacao nibs in the beer, and not being a super-experienced professional brewer at the time, we just dumped the cacao nibs right in the fermentor. The beer tasted amazing out of the tasting port, we were so surprised how good this thing turned out, so we were really excited to get it out of the fermentor, into a serving tank so we could get it on tap. And we go to transfer the beer, and it’s not moving at all. The cacao nibs fell to the bottom and completely clogged the base of the fermentor and the out port. So we spent about the next hour and a half with different types of metal rods and any sort of skinny long thing we could find to shove into the port to unclog it. After about an hour it finally unclogged. But if you can imagine 500 gallons of beer under 50 psi of pressure—as soon as it unclogged, we all just got completely drenched with cacao nibs and chocolate beer. We were finding cacao nibs in the most amazing spots in the brewery for the next three months. … But the beer turned out great. ■ 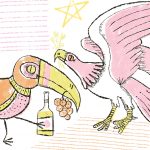 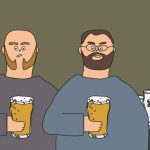 Next: The Problem With Session Beers in the US
Tags: Asheville, Luke Dickinson, North Carolina, Walt Dickinson, Wicked Weed Brewing