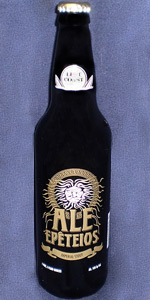 Lightly chilled 22 oz. bomber poured into a stemmed tulip. No date of any sort on the bottle.

Look- Pours a rich-looking opaque near-black with brilliant ruby facets. Chocolate-milk colored head starts off frothy and effervescent, but settles down to a half-finger of dense foam that falls fairly slowly. Minimal amount of speckled lacing.

Taste- Something of a letdown here, tastes like booze and mocha. Plenty of crystal malt and a hint of roasted grains. Overt pinelike hops come out in the middle, and there's a lingering bitter, sour taste. In fact, the aftertaste is a bit like coffee lightened with nearly soured milk. Not particularly appetizing, and the flavor builds as I drink it. Mildly flavored for the ABV, but that's not a character I'm looking for in an Imperial Stout.

Mouthfeel- Thin for the style but smooth. Mild carbonation, finishes with a bit of alcohol burn and a light sticky feeling. Not a fan.

Overall- Big buildup, big letdown. The funky aftertaste and thin body really kill this one for me. I've got no way of telling how old it is, but it's either too old or too young. As I picked it up in a decent grocery store, I’m guessing the latter, in which case the brewers should have held on to it for a while before sending it out. If it was a draught, I'd inquire about the tap lines and ask for a different one, but it's a bottle and it doesn’t appear to be skunked. I give the brewers kudos for keeping the alcohol under wraps, but I'm not going to be trying this one again soon. Surprising, really, as I've really enjoyed more than a few Left Coast offerings in the past.

Taste: Opens with coffee and bitter cocoa, soon after, sweet, warming alcohol appears. As the taste progresses, the coffee and cocoa ascend and the alcohol warms pleasantly. Finishes with a long, lingering bitter cocoa note and a bit of herbal hop bitterness.

Presentation: Packaged in a twenty-two ounce brown glass bomber with a pry-off crown, served in a New Belgium Brewing chalice.

Picked up a bomber from BevMo in early February for $6.89.

Beer poured black with a tan head that was small and dissipated quickly.

Nose is sweet mocha with light hints of coffee.

Overall a very nice impy stout,. well balanced, not over the top at all. Recommended.

Tastes strong sweet tempered by drying roast and gentle black malt sourness. Lovely chocolate rises late to keep the alcohol from drying too much in the finish. Strong hop flavor and moderate hop bitter (hard to get hop bitter in a malt with such strong flavors). This is a very nice beer. Hop grassiness in the aftertaste keeps me from pondering the malt, which is unfortunate. Md body and moderate carbonation. Decent drinkability.

22 oz bottle. Pours dark brown/black with a medium creamy light tan head that goes to a thin film and leaves a little lacing.

The flavor is bitter charred roasted grain with some black licorice, chocolate and coffee. The mouthfeel is a little thin and watery.

Overall, an OK imperial stout. It's thin and dominated by charred roast and black licorice.

Smell is patent malt and chocolate with a little smoke. Toasted grain and coffee scents. Little bit of carrot scent.

Starts out bittersweet. Strong coffee and bitterness. Chocolate and char there is some berry under all the roast but it is hard to find. Definitely on the out edge of using massive amounts of patent malt.

Overall it is just to strong on the patent malt to be that drinkable.

Appearance: Slips out a black body with a quickly receding (but what's left lasts) beige head.

Overall: I'd hoped for more. No, it's not bad, but it falls far short of so many great stouts out there today.

A - Pitch black, tan head leaves to ring. Some but not much lace.

M - Unbalanced, thin, bitter. Coffee in the pot too long.

D - High ABV and low balance, bitter flavor and watery notes make this not so drinkable.

Very nearly black in color with good clarity on the pour. The head is a nice crema color but settles almost instantly.

Aroma is really pleasant. There is a lot of great roasty malts and a surprising hoppy quality. Chocolate and coffee come forward in a way that makes me crave the first sip.

Flavor is quite nice too - rich roasted malt body supports a well-hopped aroma/flavor to bring it into balance. There is a slight fruitiness to it which includes black cherries and something like a port wine quality.

Mouthfeel is full bodied and nicely carbonated. Alcohol is evident but it's definately not 'hot' in any way.

22 oz bottle into a tulip glass.

Look: Black with a thin tan head and no real retention but settles to a thick collar

Aroma: Black licorice, chocolate and some coffee and alcohol

Flavor: Loads of dark roasted grains with some alcohol, coffee and dark chocolate.

Pours opaque black with 1/4 inch head. Taste is molasses, roasted malt, and light cream. Tasty sipper. I do prefer others in the style, but this one keeps me curious about the brewery. I would get this again.

Picked this one up on a whim at the Total Beverage in Westminster, Colorado (I think?) 5 bucks or so for a bomber of imperial stout, so...Anyways, this one left me seriously disappointed. Not bad, really, but rather bland and uninspiring for the style. Black, roasted malt, black licorice, a little smoke, but mostly just bland.

Black, short/thin dark tan head. Chocoate nose; assertive with tones of light cherry and lots of whiskey. "Sweet" smell of alcohol is primary charcter of nose, and could be confused with "sweet" fruit or sweet malt. Not bad - just alcoholic. Vanilla tones under the alcohol.

Mouthfeel is thin in the sense that it's not creamy. There is a lot going on in the mouth. Light carbonation and a lot of whiskey "hot" and alcohol. Alcohol is really present in the mouth.

Flavors are disappointing to the extent that alcohol dominates; primarily alcohol with undertones of bitter black chocolate and roasted grain with vanilla. Would prefer the other way around.

Alcohol does not disipate with age to my knowlege; this will not get less alcoholic with age and likekly will not improve.

Flavor profile also has some bitter hop character in the finish but, again, you get the hop and then the bitter coffee only as undertones to the extreme presence of alcohol.

I love big alcoholic brews. This one is just too much with not enough to otherwise redeem it.

Really dark brown edge to the color. Looks quite nice in the chalice with foamy lacing swirling around which lasts through quite a long sipping session. Aroma is definitely alcohol with some hops. Tastes hot, too, and warms the gullet. Really quite pleasant for a high octane brew. Not a lot of rich complexity. A more austere flavor profile but great for a slow nightcap. Burnt malt is main flavor with some roasted flavors. Just not much sweetness, which is OK for the style. Hops seem just right to give an edge but are not overly bitter or obtrusive.

I don't think this is bad at all, and the price is certainly right, as others have noted. Apparently this was released in October 2010.