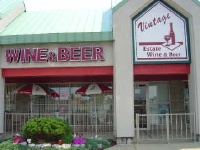 View: Place Reviews
Reviews: 89 | Ratings: 122 | Log in to view all ratings and sort
Reviews by DrJay:

I had to stop here on my way home from Canada after reading the reviews from other BAs. It was just a quick hop off the turnpike and down I-680, then just barely off the highway, making it easy for a hit-and-run beer stop. Lots of wine available, but I didn't really take a look at it since there was a wall of coolers filled with beer and shelves on the opposite wall, also filled with beer. The chilled and room temp selections were very nearly identical, with a few exceptions that I noted. Seemed like everything was single bottle sales, except I did notice a half case of Molson XXX parked in one of the coolers. Prices weren't jacked up due to this either, with many quality 12oz bottles under $1.50 each.

I have to admit that I've been in stores with much larger selections, but rarely have I been in a store where nearly every beer on the shelf was of such consistently high quality. That being said, the selection overall was fantastic. I picked up some Goose Island, Great Lakes, Fullers, Flying Dog, and noticed a lot of Victory, Stone, Weyerbacher, etc. The list just went on and on with the American craft beer. The import selection was also impressive with a large number of Belgian and UK beers, plus a lot of Unibroue. I was really there for the Alesmith 750s, since they're not available in PA. I was a little disappointed that they only had Speedway available at the time (I was hoping for some Grand Cru and Old Numbskull too), but all was forgiven when I saw several bottles of Yulesmith on the shelf.

Service was top notch. Introductions and a brief tour of the beer happened as soon as I entered and further questions were answered quickly. I have a feeling this will be a regular stop when I'm passing through the area. Definitely worth checking out and even worth going a bit out of your way to visit.

My version of Cheers taken to a craft beer level. Has all the comforts of your favorite local haunt with a tremendous selection of local and national craft brews. No TVS, friendly staff, good food and rare tappings once a week. Been going for years. Well worth your time.

I've been to many craft beer stores and breweries and I must say Vintage Estates is in my opinion the best place I have been to. From the first time I went in there, everyone was extremely helpful.

The selection of craft beer is the largest most diverse I have ever seen. The food, specifically the flatbread pizza is incredible.

They really take notice of what each customer likes, I have been there at least 8 times now and from the 3rd visit on the bartenders knew what my preferences were and are always quick to let me know what is new since my last visit.

I would HIGHLY recommend Vintage Estates to any craft beer enthusiast.

Charging $3.79/bottle for Three Floyd’s Zombie Dust instead of the $12/six pack, like everyone else, everywhere else. I brought this up on Facebook, as did 2-3 friends, and they disabled reviews. That's petty, and indicative that the owner knows they're in the wrong. Well played. Otherwise, great selection, and I always make sure to stop by when visiting friends in Ohio.

Was told that I needed to check this place out by a friend of mine who lives in Ohio. So I planned out the stop on my way back to PA from OH. The store is split into 3 parts. The wine store is first then the beer area and then a taproom. It's pretty incredible honestly. The selection is very impressive, the service was excellent too. All in all, if I'm ever out that way again I'll definitely make this a stop.

Vibe: I went during a non-busy time. It was a chill atmosphere in each of the rooms. Seems like it would be a great place to hang up a coat and have a few pints with some friends.

Quality: From what I could tell a lot of the beers were fresh, including the bombers on the walls.

Service: The service was fantastic, not too intrusive, but interested in helping and informative when doing so.

Selection: A top-notch, juicy selection of all styles. I felt confident in picking out beers I've never had because of the wide range of above par beers.

Food: I had a reuben panini to go, but the chips, pickle and sandwich were ripe. I'd definitely like to come back and slurp up a few more items on the menu.

Overall: If you don't walk out of here with at least a sixer or a case, I'd be surprised. The pricing is reasonable. They mentioned that they have bottle releases, and I'm excited about attending. Rolling in from Pittsburgh, it's worth the time, gas, and tolls. This is likely going to be a top 5 on my go-to despite the distance.

I love this place. I drive 20 minutes from Austintown just to grab some new stuff everytime (as well as a few Belgium favorites). Biggest beer selection that I know of around here.

In addition to their wine selection, Vintage has a large room to the left of the entrance with a wide variety of beers and styles to select from. Most of of these are on shelves in the center at room temperature, but at least some effort has been made to prevent too much sun exposure. It's quite cramped if more than one person is in an aisle at a time, and a bit warm and musty. The obvious or more popular beers are in coolers, allowing people to crack them open at the bar, or take them home cold.

The selection is perhaps a little too big as there are some large sections of older brews that have been around a while, and Boardman isn't exactly known for it's bustling craft beer scene, so some of these may continue to age on these shelves.

They also have two bars and an impressive array of taps on both sides with a lot of sought after fresh and new brews featured.

Food mostly consists of unique pizzas with tasty combos that ain't half bad!

I have heard many great things about this place and was finally fortunate enough to experience it on a Sunday shortly after opening.

It is located in a strip mall. There was an outside patio to the left as I approached. I walked into a wine store. The beer store/bar was to the left. Once inside the beer room there were shelves and shelves of cold and room temperature beer. The bar in that room had twelve beers on tap. The next room over was a bar with twelve more beers.

The beers on tap were wide in style which was nice. I had a couple sours and IPA's. My girlfriend and I ordered some food from the wide array of flatbreads. It was served on brown paper on the bar.

The place was good, but after hearing so much hype about this place I was a little disappointed. I'll admit my expectations were too high. This is a very cool place.

I want to have my ashes spread here. This place is absolutely incredible. If you can't find something to suit your taste, you don't like beer.

Excellent place with an ample selection of the finest brews and wines. We love this place and return often. We like to get a sample flat of beer and she gets wine, we can try all kinds and find what we like best. The flat bread is awesome!