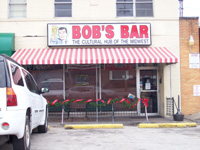 View: Place Reviews
Reviews: 33 | Ratings: 50 | Log in to view all ratings and sort
Reviews by LabBrewer:

Bob's Bar is one of the more unusual beer bars I've been to, but has been the best beer bar I've visited in Columbus so far by a pretty decent margin as well. If you are looking to have a beer in the Columbus area, this is the place I would tell you to go to.

The beer selection is really nice. Probably around 20 things on tap, a good mix of local and east coast beers, some west coast stuff and a few good imports. Things that I have had recently there on tap are Fathead IPA, Troeggs barleywine, Rodenbach Grand Cru, just to give you a taste of the kinds of things they have on tap. They also have a great bottle list. Last time I was in with the Mrs. we had a 2011 Pannepot and that was a fantastic beer. And the beer prices are really reasonable. I think everything on tap is in the $4-5 range.

I like the atmosphere of the place, even if it is non-standard for a beer bar with a great selection. It definitely has the feel of the neighborhood "old man" bar, seems to be a place that a lot of locals stop by on their way home from work, but it is a very welcoming place and everyone gets along. I'd say half the people are drinking craft beer and the other half are drinking BMC, but usually these two groups are intermingling so there isn't a Jets vs. Sharks vibe with craft and non-craft drinkers in the place.

Give it a visit, you won't be disappointed.