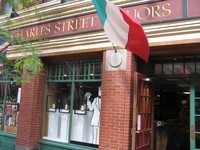 View: Place Reviews
Reviews: 51 | Ratings: 66 | Log in to view all ratings and sort
Reviews by Holderness:

Interesting tucked-away store here. It seems that the folks who frequent this one are not interested in bombers, so you can find stuff here that hasn't been available elsewhere in Boston for a long time (Avery Mephistopheles was one that stood out, probably bottled over 5 years ago). They do allow breaking up packs, which is nice. Good but not amazing selection.

located just off the Charles/MGH T stop, CSL might be the best craft option in downtown Boston. as with most downtown liquor stores, the space is limited and shared with wine and spirits, so while you might not be overwhelmed ala Julio's or Marty's or someplace of that ilk, it's enough to leave a beer enthusiast pleasantly satisfied. the chilled 4/6pks are situated in coolers in the back, while bombers are parked on shelves to the back left side of the store. solid overall selection ranging from the usual locals (Pretty Things, CBC, Jack's Abby, BBC, etc) to the standouts across the country (Stone, Founders, DFH, Avery, Ballast Point, Great Divide, Goose Island, Boulevard, Southern Tier, Lost Abbey, Allagash, Victory, Lagunitas, et al), with a handful of some obscure stuff you don't tend to see in your run of the mill liquor store. the stock is fairly well organized and also inundated with many European beers, including a small but impressive selection of Belgians.

prices are easily a dollar or two more than you see outside the city, but that's to be expected in the downtown area. the staff is pretty friendly and usually - though not always - will approach to ask if you need help. worth a look if in the area and would be on a short list of go-to stops for beer fans living in the Back Bay/Beacon Hill/West End vicinity.

Probably the easiest store to get to if you are downtown. The selection is pretty strong, though the focus tends to be a little more towards European beers. This store surprises me as some things linger on the shelves a little more than one would think. Some stuff goes very quickly, but occasionally, you find a beer that doesn't seem to be available anywhere else. A definite stop if you are in the area.

A regular stop for me, they have a solid selection of beer (given there isn't much for selection in the area) and come through with some rarities from time to time. It's a good idea to keep an eye on their facebook feed if you are looking for something special.

This place is conveniently located on Charles Street in downtown Boston, not too far from the hospital area where I was staying with a friend. It is a relatively small store in general for wine/liquor/beer and the craft beer section also is small. But, they do make a very good use of their space. You can pick up some Belgian classics like Chimay and other trappist beers. Mass beers like Haverhill and Mayflower. Other US craft beer such as Port, McNeill`s, White Birch. The staff I came across were friendly enough, but did not all seem well versed in their offerings. Prices were better than I expected for the great location, where other things can tend to cost a pretty penny.

stopped into charles street liquors for the first time today and should of gone there a long time before. i have worked in the neighborhood for a long time and there really is no excuse for my delay.

the beer section is in the back and since the store is small (its beacon hill) the beer section is a bit on the small side. BUT they have a great selection of beer particularly when it comes to imported beers. i saw a lot of stuff that i have not seen in other stores and given its proximity to my work i'm quite excited by this prospect.

im giving the pricing a reasonable rating but some of the prices are on the more expensive side of reasonable (that is most of the stuff i saw was either equally priced to most stores in the cambridge/somerville area or a quarter to fifty cents more).. given its beacon hill thats actually quite a deal.. most stores on this street are super overpriced.

service is very good and the staff is very knowledgeable and friendly.

Wine tends to be the liquor of choice here but do not fret; if you walk to the back of the store you will find a small but high quality beer section. There are a couple of coolers for the national macros and better-known micros but I think you will be spending time perusing the dry shelves where they stock their imports, Belgians, and scarcer regionals. Some of the UK imports I have not seen before (ie. Fullers Honey). You cannot pull from 4 or 6 packs but there is a singles cooler. The singles are mainly nationally known brews though. Be prepared to spend a little more than you are used to. If you are in Boston it is worth a visit. Don't make plans to turn it into a tourist destination. It is fairly easy to get to from the Red Line, which has a station about a block or two away.

Just decided to stop in and browse what they had last night, especially after hearing so much about them. Needless to say, I was very impressed. Let's get this out of the way now: Is it Julio's? No. Do they still have a reasonably large selection of great beers? Definitely, especially considering the selection at most other surrounding stores. Mostly 22's, but a fair amount of singles too, including harder to find ones (I haven't really been looking for it, but I haven't noticed Traquair anywhere else besides Julio's and here). A good selection of Belgians and American craft alike. I decided to buy just one bottle; since I still have a good stash at the moment, but I wanted to throw a little support to a store I was starting to like so much. The staff was very friendly when I went to check out and the guy working was quite talkative. Nobody came to talk to me when I was browsing the isles though, which I actually prefer (I don't like to feel rushed when I'm looking for something, but not any specific item). Prices were a bit high on some items, but overall pretty fair. I liked their selection and staff a little more than the stores a little closer to me, and it is way closer than Marty's or Publick House for me (let alone Julio's), so I figure I'll be trekking here quite often. Great place to stop in at for some tougher to find bottles.

one of my regular stops. that said, IMO it's a bit - a bit - overrated from a beer standpoint. don't get me wrong, the selection is great, with many local and regional brews to accompany offerings from the west coast and europe, and pretty well organized. part of an aisle is devoted soley to belgians, which is up my alley, and most major breweries i look for like DFH, founders, ST, lagunitas, avery, and goose island are well represented. and while there are a few obscure beers, a lot of this stuff can be found elsewhere in the city and at cheaper prices. (though it's not outrageous, either.) to be fair, it's a relatively small store and also purveyor of wine and spirits, so they do put limited space to good use. the staff is friendly, though recently the "beer guy" - as he was called by another employee - while amiable and well-intentioned, had trouble identifying a quad. all will be forgiven if the can deliver goose island's vanilla boubon stout upon release! ;)

the location is an asset, steps from the charles/MGH red line stop, or a short walk up charles from the common/public garden. all in all, a place you have to check out, esp if you're in the area.

I went to Charles Street Liquors yesterday for the first time in about a year and have to say I was a bit disappointed. This used to be the place where you could find lots of really hard to find beers that you could not find anywhere else. While the selection still has some gems, there are a lot more common beers. There are about four shelf cases with bombers and foreign beers. Their Belgian selection is a bright spot. The appearance as others have said leaves a bit to be desired. The aisle in back of the beer aisle was covered in old cardboard boxes. The service was courteous and knowledgeable, so no complaints there. What I got was a bit pricey for what I expected to pay for it. If I was in Boston--especially Boston proper, I would still come to this store every now and then. The selection still beats most in the area, and it clearly caters to craft. However, it just is not worth the hour trip as it once was or as some other stores still are.